The Arrowcave, GCPD, the Playground, and more — welcome to the most impressive command centers on comic book television.

TAGGED AS: ABC, FOX, The CW 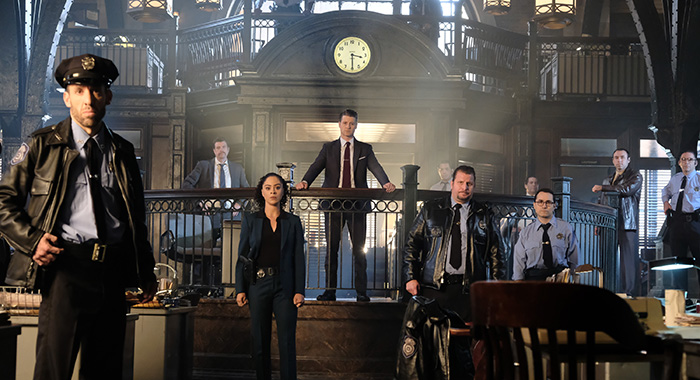 While superheroes are best defined by the their powers, their costumes, and the psychological break that turned them into vigilantes, many have one more defining feature: their hero’s lair. Not everyone has one, of course, but thanks to the Batcave, they are more widespread than you would think. And since the Batcave made its television debut in 1966, many subsequent TV heroes have tried to match it. Some sets, like the Sanctum Santorum in the 1978 Dr. Strange TV movie, fail spectacularly to convey the sense that the hero would choose to work there.

But what defines a good lair? It should offer the hero or heroes as many tools as possible. Visually, it should convey some of the character’s persona. It should also offer a sort of stage for the hero and their friends to debate the crisis at hand — with lots of monitors, of course, for visual exposition. With those qualities in mind, here are five of the best lairs in comic book television. 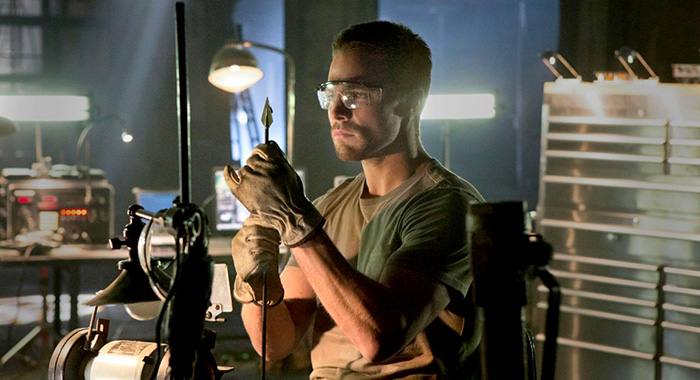 While the more recent Arrowcave definitely offers Oliver Queen (Stephen Amell) and his team a very theatrical place from which to disagree about everything, the original Arrowcave shows off more of Ollie’s personality. Maybe that was always the intent.

But the cramped quarters reflected one of the key aspects of Arrow in those days, Ollie’s uneasy alliance with anybody. The early days of the salmon ladder perfectly illustrated to lone brooder accustomed to solitude, while each new arrival made the set more cramped and Ollie’s stated desire to work alone more of a lie. While it may have never been an ideal space for conferences, its design reflected a certain theatricality Ollie himself would also deny.

The second Arrowcave traded in the oddly charming dank for a much larger, but somehow impersonal space for the reinforced Team Arrow.

As the only villain’s lair on our list — although the end of Luke Cage’s second season offers something of a status change for the night club – Harlem’s Paradise has to be something real special. It is real estate both Cornell Stokes (Mahershala Ali) and Mariah Dillard (Alfre Woodard) were willing to die for. It’s been shot up a number of times, used as part of a hostage situation and yet still manages to book some killer acts whenever its open to the public.

In terms of the theatrical, it literally has a stage serving as a focal point. But the real action occurs stage right, across the dance floor and up one level in the boss’s office. And thanks to a camera crane, the action often switches from stage to the office — or vice versa — in one beautiful shot. As for revealing character, it was very much Cornell’s soul on display before his death. The Biggie portrait, the Rhodes Mark II piano he salvaged from Mama Mabel’s house, even the way he displayed his liquor all offered clues to his character. Once Mariah took center stage — literally, figuratively, and violently — she made sure to change key elements of office, leaving only the piano behind and making Mama Mabel’s picture more prominent. And then, of course, there’s the Basquiat …

It may lack for monitors, but the gorgeous setting makes up for it with rich, mid-century details and the large round window from which the boss can observe the crowd below.

And as Harlem’s Paradise changes hands again, it becomes something more than a reflection of its owner. It symbolizes the struggle to hold onto Harlem itself. Maybe that’s why Mariah gave it to Luke (Mike Colter): preserving Harlem requires someone’s soul being consumed by the Paradise itself.

Like Harlem’s Paradise, the GCPD squad room on Gotham also steals souls. The person sitting in the captain’s office, for instance, often winds up dead. Set up on a dais conveniently behind Jim Gordon’s (Ben McKenzie) desk for the first few years, its theatricality also symbolized Jim’s inexorable flight up those stairs and his destiny within its walls.

Beyond the office, the squad room is a microcosm of Gotham City itself. Reprobates and psychos in the lock-up to the right of the captain’s office, a pool of detectives in the center. Then there is the craftsmanship of the set itself, which suggests an older and finer time in Gotham, but also reflects just how absurd it is to have the often corrupt police force residing within a place built with such care. To the left of the captain’s office, ornate entrances offer Oswald Cobblepot (Robin Lord Taylor) a theatrical entrance to consult with Jim or, in later seasons, threaten him. And if it truly is a microcosm of the city, then it also becomes a space for Bruce Wayne (David Mazouz) to make a nuisance of himself.

But does the ornate architecture, theatrical accents, and space large enough to fit the entire Gotham cast offer insight into Jim? Definitely. The beautiful set is a constant reminder of the Gotham Jim believes exists under the chaos and crime on display within its walls. And as mentioned above, that office is his destiny. And now that he has finally embraced command, it remains to be seen if he can spread his vision across the squad room and across the city itself; particularly considering the compromise he had to make with Sofia Falcone (Crystal Reed).

Maybe someone with a more famous lair will be better suited for the task.

In the early days of S.H.I.E.L.D., Phillip Coulson (Clark Gregg) and his team really didn’t have a lair as such, they had the Bus. It was a flying mobile command center meant to evoke a S.H.I.E.L.D. helecarrier — as seen in Marvel’s The Avengers — while acting as a practical television set. It also reflected the team’s transient state both before and after the fall of S.H.I.E.L.D.

But in the final moments of the first season, Coulson moved the group to a S.H.I.E.L.D facility not overrun by Hydra: The Playground. It was an older base — in fact, it was appropriated from an older agency, the Strategic Scientific Reserve Peggy Carter (Hayley Atwell) served in after World War II – but it proved to be the perfect headquarters from which to rebuild the broken agency. The brick walls, adorned with SSR logos, and rec room offered something more homey than the Bus even as its various labs, vaults, giant flight deck, and Peggy’s old office reminded Coulson and the others about the task at hand.

In fact, Coulson’s office may have the most impressive bank of monitors on this list. Comprising the far wall of the office, Coulson (or whoever was acting as director that week) could keep abreast of crises all over the world with ease. It could also focus in on Daisy’s (Chloe Bennet) latest wave of destruction during season 4 or switch to the cable news, where political opponents questioned the value of restoring an agency so thoroughly overrun by Nazis.

Of course, that wall of monitors may be compensating for the base’s complete lack of a theatrical space. With no focal location, many of the tensest moments in the base occurred in a nondescript hallway.

Sadly, nothing lasts forever and the Playground was virtually destroyed during AIDA’s attempt to become a truly living entity. After a sojourn to the future, the remnants of S.H.I.E.L.D. would make their way to the Lighthouse, where even a holographic Patrick Warburton could do nothing to make the mid-1970s steel facility feel like home.

Over on The Flash, S.T.A.R. labs would be nothing but hallways as well if not for Harrison Wells’ – or was it Eobard Thawne? (both played by Tom Cavanagh) — brilliant idea for the Cortex. Though the building is a massive complex of smaller labs and the meta-containing pipeline, it features a focal point from which much of the show’s drama can occur. This central lab has a bank of monitors to keep the characters up to date and a handy medbay where Dr. Caitlin Snow (Danielle Panabaker) can check out Barry (Grant Gustin) or any injured meta he happens to bring back with him from a mission.

Thanks to the prominent placing of Iris’ (Candace Patton) workstation and Barry’s costume, the Cortex has plenty of space for that sense of theater. And it’s been used for that purpose many times when the team huddle around the monitors to help an in-the-field Barry out-think his opponent. Sometimes, the Cortex has been home to more personal dramas as well.

It also reflects Barry’s personality in a very direct way. As both hero and scientist, he is represented by his costume and the clear dry-erase boards with notes scrawled upon them at all times. Also, those central items are flanked by Caitlin’s medbay and a smaller version of Cisco’s (Carlos Valdes) workshop — a subtle reminder that the Flash is a team. In the last few years, those marker boards have come to represent his struggle against foes better equipped than he is, but with their placement in the Cortex — the place where all of Team Flash comes together — the show illustrates that Barry’s greatest strength is, ultimately, his bond with those people backing him up.