The star of Sleeping with Other People watched a lot of 1980s and 1990s movies with her dad. 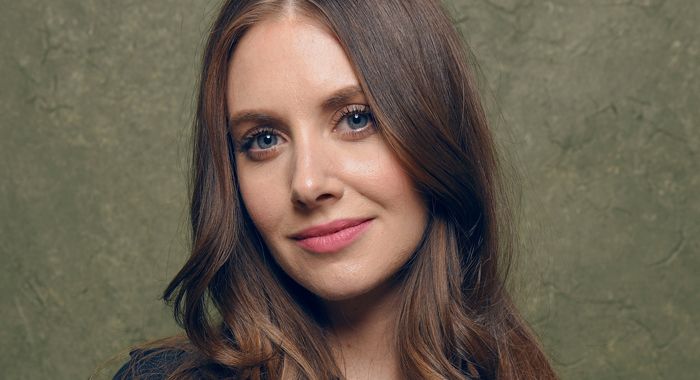 Despite a recurring role on Mad Men and appearances in several films and TV shows, Alison Brie is probably best known for playing the sweet, bubbly, somewhat neurotic goody two-shoes Annie Edison on Community, the quirky and inventive sitcom that earned a massive cult following despite its almost annual struggle to stay on the air. Brie is one of the brightest talents to emerge from Community, and this week, she stars opposite Jason Sudeikis in Leslye Headland’s romantic comedy Sleeping with Other People, about two relationship-challenged friends who slowly discover they might be right for each other.

When we asked Brie about her Five Favorite Films, she replied enthusiastically, “This is actually amazing, because I was recently thinking that whenever people ask me what my favorite movies are, I’m not prepared. So recently I did start to write down some things just for this situation, so I have them right here!” She also noted a running theme in her choices: “I feel like my reasoning is going to be similar; the theme – which I didn’t even realize until I wrote them down – was that there’s a strong female protagonist in all of them. It hadn’t even occurred to me.” With all of that in mind, here are Alison Brie’s Five Favorite Films. 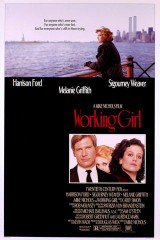 The first one is Working Girl. I love that movie, and I think all the female characters in it are pretty amazing. I love watching Melanie Griffith’s transformation. Her wardrobe and her makeup is amazing, because it’s the ‘80s. It’s unbelievably awful; you can’t even believe that people used to think that was okay to dress that way, or that other people found it attractive. Joan Cusack is amazing in it. Her eye shadow is so blue; it’s horrifying, and you also can’t look away. Sigourney Weaver is a great villain in it, because she also has moments when you, I don’t know, you kind of like her… and then you don’t in the end, of course. But she’s a very interesting, strong character. Even her tone of voice and the way that she’s super sweet to everyone; it’s almost like Meryl Streep in The Devil Wears Prada before she did that. You know, kind of the bitch with the huge smile on her face. So I love that movie. If I turn on just the last five minutes, I burst into tears. [laughs] Joan Cusack stands up and is like, “She did it!” and that Carly Simon song comes on, and I just feel strong and inspired, and I always cry. It’s like a happy cry. I’m surprised that it still makes me cry, but I’m always just like, “Yes! This is incredible!” 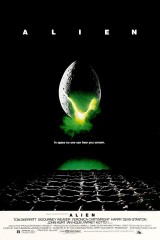 This next one, there’s an actress tie-in. The next one is Alien. So, I clearly have a bit of a Sigourney Weaver fetish. I love the movie Alien. I wouldn’t say… I mean, I like sci-fi movies – I’m open to them – but I’m not a huge sci-fi buff, I guess. I really love watching the older sci-fi films that had the man-made special effects, the pre-CGI practical effects, and I think that Alien is one of the greatest examples of that. I think that movie is so cool. For the time when it was made, the effects, I think, hold up completely. You know, the scene with the alien popping out of the guy’s chest. It’s gripping. And also, it’s very dramatic as a film. It’s not as action-heavy as you might think it should be in your mind; because you’re setting up the whole thing, there’s a lot of silence. There’s a lot of people alone – you see them on their own. And obviously Sigourney Weaver is so incredible in it. I don’t think it was the first time I saw it, but the first movie that I saw in the Cinerama Dome at the Arclight was Alien, so I think it just cinematically took my breath away. You know, by that time, The Matrix is getting made, and you’re having these cooler effects and other things going on, and I still found it so admirable that something like that holds up and cinematically is so beautiful. 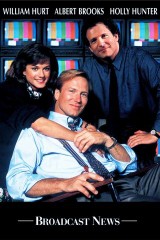 Broadcast News is next on the list. I’m a big Holly Hunter fan. I just think it’s a great movie; it’s funny, it’s sad, it’s interesting. It’s got that archetype of the ambitious news woman, you know? I like that she’s behind the scenes. It’s a character that I’ve never played in a movie. I think that I’m always waiting for that role; they all seem to go to Rachel McAdams. [laughs] You know, that inquisitive journalist who’s behind the scenes and is super feisty. We’ve done a couple episodes of Community where I got to sort of channel that energy. But it’s definitely a role I’ve always had my eye on, and Holly Hunter is such a singular actress in her style, and her voice is unique, and she’s such a petite woman; I think she carries her strength in an interesting way. She just emanates strength and confidence. She also has amazing crying scenes. It’s a great showcase of her acting. 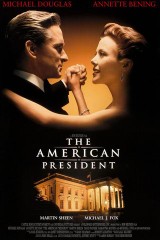 The next one is The American President. I’ve been talking a lot about romantic comedies lately because of Sleeping with Other People, and you know, I’m listing all my favorite rom-coms, and you’re talking about When Harry Met Sally, Sleepless in Seattle, and things like that, that could just as easily be on this list for me; I watch those movies all the time and love them. But I realized it took me a second to realize that The American President is a romantic comedy, because it has a political angle, and it’s got that [Aaron] Sorkin dialogue. But it’s directed by Rob Reiner, and ultimately it’s just a full-on love story between these two people that also has snappy banter and comedic scenes.

I think Annette Bening gives one of the best comedic performances of her career; she’s so specific. There’s a scene where, it’s like before her first date with the president, played by Michael Douglas, and she’s sitting in the office and she’s tapping her pen on the desk. The guy says to her, “What’s up? You got a hot date tonight?” and then she does this move where she goes to put the pen in a jar, and the whole jar falls over. There was something so effortless and so specific about that to me; it’s a moment that jumps out at me, in terms of making the work you’re doing funny, but still feeling in the moment. I don’t know how many times she shot that scene, but it looks so natural. When I watch it, I find it hard to believe that it wasn’t really an accident that she knocked over that jar, and that’s incredible. I love that movie, and I love Annette Bening. And her hair. And her shoulders, her shoulder muscles when she’s dancing with the president in that blue dress. These are all things I aspire to. 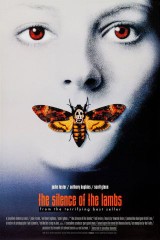 The final one is The Silence of the Lambs. I love dark movies, and I love thrillers. I don’t like horror movies because I get too scared. [laughs] I draw the line at thrillers; I like to think while I’m afraid. Obviously, great characters in that movie. The shots last for like a million years. Anthony Hopkins never blinks. Again, you just see the throughline; Jodie Foster’s character is obviously strong in that she’s dealing with this serial killer and she’s keeping up with everybody and her boss at the FBI. At the same time, she’s so vulnerable. It’s her vulnerability that enables her to have this connection with this psychopath. It’s a brilliant performance, and I just love that movie. It’s so good.

Ryan Fujitani for Rotten Tomatoes: Almost all of your choices are from around the same era, the late 1980s to early 1990s.

Alison Brie: I used to watch a lot of movies with my dad. I mean, he loved old, classic movies, but none of them are on my list, even though I watched a lot of them and loved them. But also, we would watch a lot of random movies from the ‘80s and ‘90s, because we kind of would just watch whatever was on cable, and my dad would go, “Oh my god, have you ever seen this movie? Oh, it’s great! We gotta watch it!” So I have this random lexicon of ‘80s and ‘90s movies that not everyone from my generation was watching, like Defending Your Life. I remember describing the plot to Donald Glover in our first season of Community and he was like, “Are you making this up?” I was like, “No!” [laughs] He was like, “And Meryl Streep is in it? And Albert Brooks? It sounds so weird.” Oh, it’s amazing.

Rotten Tomatoes: I’m pretty sure I discovered Defending Your Life for the first time on cable, too.

Brie: Yes! Because they used to play it on cable all the time! [laughs] And you’re just like, “Oh, yeah, this is perfect. This is what I want to watch after school. While I do my homework.” I’m a great multitasker.

Rotten Tomatoes: When you were talking about Broadcast News, you mentioned you were interested in playing the feisty, ambitious journalist type.

Brie: Absolutely, yes! I’m searching for that role to do, 100 percent. I’ll just keep putting it out there. They make movies like that every few years. I watch a movie like The Paper with Michael Keaton and Robert Duvall, and I’m like, “If I could be the Keaton in that, it’d be great!” [laughs] I’m just dying to play a journalist. I don’t know why. I like fast-paced characters who are super smart, smarter than myself, and way more into current events than I am.

Rotten Tomatoes: There aren’t a lot of romantic comedies these days that are written and/or directed by women, but Sleeping with Other People was both written and directed by a woman. Is it a noticeably different experience for you?

Brie: It’s tough because feminism is a very hot topic in our industry today, so that tends to be the focus, but not having worked with a lot of women, I can really only speak to it being a singular experience because of Leslye Headland specifically. Definitely, I had a different experience working with Leslye than with other directors I’ve worked with, because she’s written the material, because the material is so personal to her, because her voice is so strong and so specific and so frank. She has such a candid way of sharing her life, as the characters do, and as a director, she’s so emotionally connected to the actors throughout the whole process. So that was very different for me. It definitely felt like she was in the trenches with me, and we were feeling what was going on with the character together. And, of course, at the same time, she’s got her eye on it from the outside.

Sleeping with Other People opens today in limited release.