From exciting debuts and original stories to big-budget sequels and big-time directors returning to the genre, there's something for everyone.

With a vaccine rollout underway, it’s starting to feel like Hollywood may finally crawl back to normal. This means that we can start looking forward to some spooky times at the movie theater (or at home!) again.

Awards season may be taking all the attention right now, and sure, the summer movie season is just around the corner, but horror isn’t just limited to Halloween these days, so there are plenty of scares to be had all year long. There’s everything from exciting debuts and original stories to big-budget sequels and big-time directors making their triumphant returns to the genre. Whatever makes you scream, there’s bound to be at least one movie for you this year.

So clear your throat and find some covers to duck under, because we’re rounding up the horror movies we can’t wait to scare us in 2021.

Here’s a sentence we never thought we’d write: Chris Rock and Samuel L. Jackson are starring in the ninth installment of the hugely popular Saw franchise. And yet, that alone has us excited for Spiral, which sees Darren Lynn Bousman (Saw II, III, and IV) returning to the franchise to direct the reboot. The film promises a detective thriller about a mysterious killer targeting cops and leaving spiral symbols in his wake, but fans of the franchise know to expect a lot of gory traps and severed limbs. Plus, seeing Samuel L. Jackson go up against Jigsaw should have horror fans giddy in anticipation.

Zack Snyder made one hell of a directorial debut with his 2004 remake of Dawn of the Dead, so his triumphant return to the genre is enough to pique our interest. Add a fun, flashy locale like Las Vegas and a plot revolving around a casino heist, and baby, you’ve got a stew going. This looks like just the type of balls-to-the-wall horror film to kick off the summer season with a bang. And if one movie isn’t enough for you, don’t worry, because Army of the Dead is also getting a live-action prequel, as well as an animated spin-off series.

Last year, we were robbed of the chance to see A Quiet Place Part II, the long-anticipated sequel to one of the best original horror films in recent memory, and that only makes us more excited to finally see it released later this year. The Abbott family, sans John Krasinski’s character, finally ventures to the outside world and will have to fight for survival against the terrifying noise-seeking monsters that roam the Earth. The first film was a tense and terrifying experience that also managed to pull at the heartstrings, so getting to see more of this world makes Part II a must-watch. 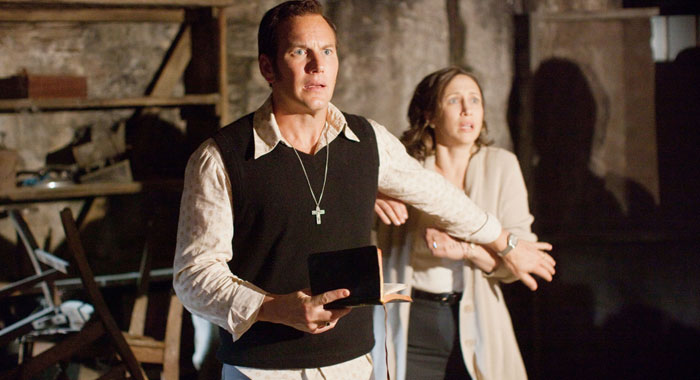 We truly don’t have enough courtroom horror movies, despite the few that have come out being relatively effective. Thankfully, the latest installment in The Conjuring franchise wants to change that, with Vera Farmiga and Patrick Wilson returning as Ed and Lorraine Warren for another fun and terrifying adventure — this time in a courthouse! The Devil Made Me Do It is based on the first-known court case in the U.S. in which the defendant claimed innocence via demonic possession. The idea of someone on the witness stand suddenly speaking in Latin and levitating as a priest shouts “Objection!” feels like just what the franchise was missing. As long as we have a scene where Wilson sings an Elvis song, or someone does a take on “You can’t handle the truth” but makes it about the devil, we’re happy. 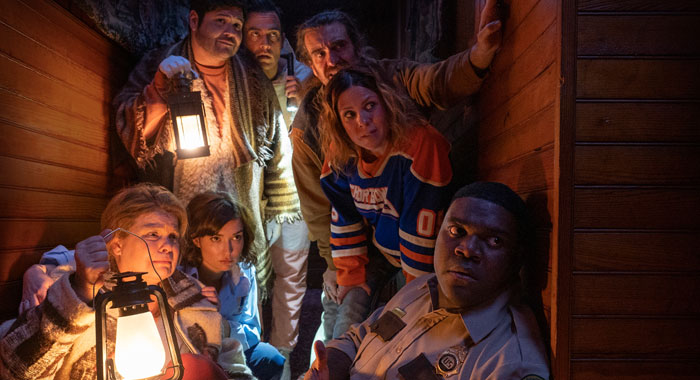 You can never have enough werewolf movies, especially horror-comedies about lycanthropes, but to have one described as “both a whodunit and a whatdunit” should make you immediately mark your calendar for the release of Werewolves Within. This horror-comedy based on the VR game of the same title stars Sam Richardson as a forest ranger in a remote, snowed-in town trying to figure out what exactly is eating the locals. It’s essentially Among Us, but with a werewolf, and it comes to us courtesy of Josh Ruben, who already impressed with the hilarious and more-than-a-little-creepy Scare Me just last year. 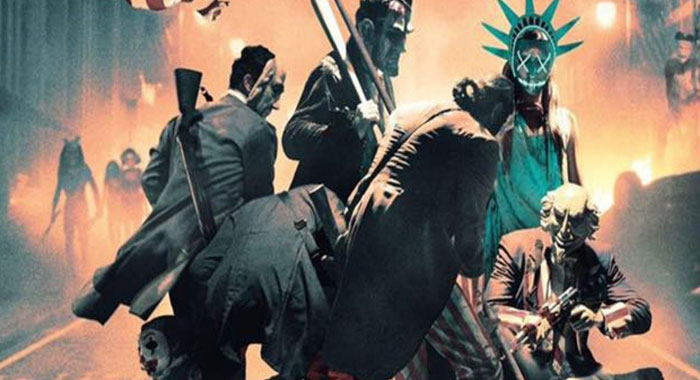 The very successful Purge franchise is coming to an end, but they are hoping to go out with a bang. These movies have always felt more than a little topical, so we can’t wait to see how this one plays out. The Forever Purge picks up shortly after 2016’s Election Year, which saw the titular Purge night abolished. The film follows a Mexican couple escaping a drug cartel in Texas while running into a group looking to keep the horror alive by purging even after the allotted time. Ending a franchise is difficult but exciting, so we can’t wait to see if The Forever Purge can pull off a satisfying conclusion to the franchise.

There’s no doubt that aging sucks. It’s uncomfortable, painful, and confusing — and it seems M. Night Shyamalan agrees. Though we don’t know a lot about what the filmmaker’s latest is about, we do know it features a stellar cast that includes everyone from Gael García Bernal to Thomasin McKenzie, and it follows a family on a strange beach where people start aging alarmingly fast. Shyamalan shot Old during the pandemic, and we’re excited to see how a restrained environment impacted his work. In the meantime, start making your predictions for the big twist!

A new film from the director of A Ghost Story that’s a dark fantasy/horror version of the Arthurian legend of Sir Gawain, starring Dev Patel? This one has been on many horror aficionados’ radar for a while, especially once it was delayed due to the pandemic. Based on the Middle English poem Sir Gawain and the Green Knight, and featuring surreal imagery, the story follows Arthurian hero Sir Gawain as he confronts the titular knight but encounters all kinds of ghosts, monsters, and villains along the way. Horror fantasy is an underexplored genre, so we can’t wait to see what The Green Knight does to push it forward.

Candyman has been at the top of many a horror fan’s list of most anticipated movies from the moment it was announced. This spiritual sequel to the 1992 cult film of the same name is directed by Nia DaCosta, produced by Oscar-winner Jordan Peele, and stars breakout star Yahya Abdul-Mateen II; in other words, it’s stacked. Of course, talent alone doesn’t make a great movie, but everything we’ve seen from the trailers to that phenomenal animated short film telling the origin of the titular titular “villain” promise a harrowing, terrifying, and unsettling film. The plot is also a timely one, as it takes us back to the Cabrini-Green neighborhood in Chicago, which has been heavily gentrified but not stripped of its history of racism and oppression, leading Candyman to strike again. 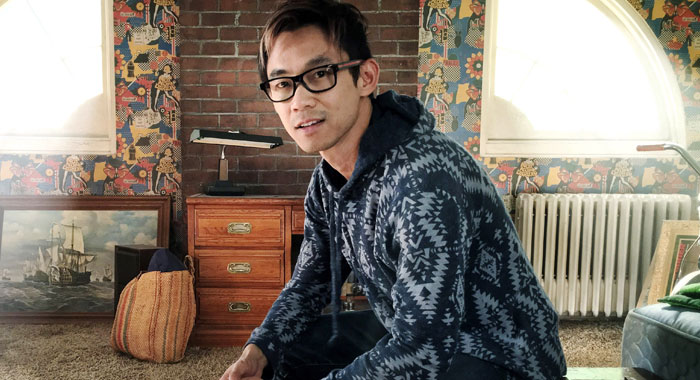 We know next to nothing about Malignant, but what we do know makes it more than worthy of this list. For one, this is James Wan’s return to horror, after a brief stint directing Aquaman, and his involvement alone makes horror fans intrigued. Then there’s the fact that this is an entirely original idea, said to be inspired by the Giallo genre, and the single image we have of the film, which features a creepy leather glove holding a golden sword — what does it mean? We don’t know, but we can’t wait to find out.

Adding to the list of sequels to surprisingly successful horror films, we’re getting close to the middle chapter of the Halloween reboot/sequel trilogy, and waiting this long has been agony. The previous film was a surprisingly fun, tense, and emotionally deep exploration of trauma that still featured a human jack-o’lantern. Halloween Kills promises to up the ante with an exponentially higher body count and the return of Tommy Doyle and Lindsey Wallace, as well as the Myers house and a topical exploration of mob violence that is sure to spark a lot of fan conversation in-between all the screams and cheers. 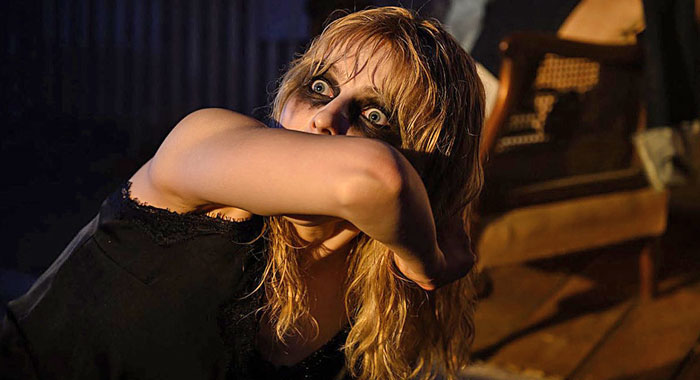 Edgar Wright giving us not one, but two films in 2021 is already a gift, but one of those being his first foray into fully-fleshed horror? That’s just the icing on the cake. Last Night in Soho is an original horror film based on an idea by Wright that is said to be inspired by British horror classics like Don’t Look Now and includes a star-studded cast led by Anya Taylor-Joy and Thomasin McKenzie. Plus it involves time travel? Leave it to Edgar Wright to not be content with just exploring one genre, as Last Night in Soho follows a young wannabe fashion designer who mysteriously travels to the 1960s to find her idol, but encounters a darker and shadier world. It’s been a while since Wright has played with scares, so we can’t wait to see him go full psychological horror with this film.

As a producer, Guillermo del Toro has picked incredibly talented filmmakers with unique visions for the future of the horror genre, delivering such films as The Orphanage and Mama. Now, he’s helping Crazy Heart director Scott Cooper enter the horror fold with Antlers, which promises to fulfill the Wendigo-sized hole in our hearts left by the Pet Sematary remake. Keri Russell and Jesse Plemons investigate a young boy in their Oregon town who is constantly bringing small animals to his house where he feeds his pet — who may or may not be a Wendigo-like creature. The film is based on a story by Channel Zero creator Nick Antosca, the trailer looks terrific, and the creature design is already impressive. Fans of monster movies should keep an eye out for Antlers this Halloween. 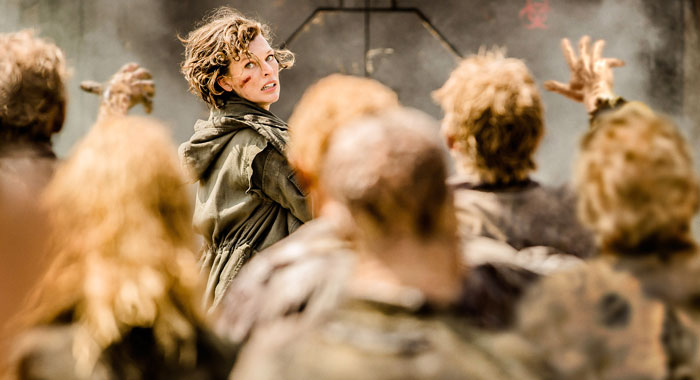 The long-running Resident Evil franchise is getting a revamp this year that should please gamers. After six films starring Milla Jovovich (pictured above) that took more of an action-heavy approach to the iconic zombie video game franchise, the upcoming reboot is bringing it all the way back to 1998. This film will tell the origin story of the sinister Spencer Mansion and Raccoon City, with Kaya Scodelario and Robbie Amell leading the cast as the popular Claire and Chris Redfield from the first two games. Director Johannes Roberts promises a film that’s scarier than its predecessors and captures the visceral terror of the Capcom games. With not one but two TV shows in development — one animated and one live-action — 2021 could end up the year of Resident Evil. 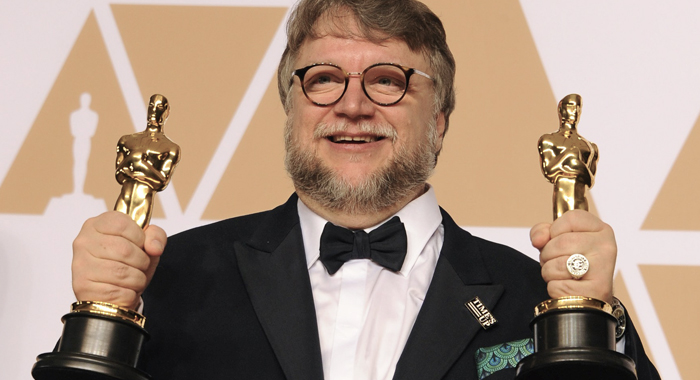 Speaking of Guillermo del Toro, we’re finally getting the Oscar-winner’s triumphant return to horror this year. Nightmare Alley arrives in early December, which seems to indicate that the studio thinks this could be an awards contender, and if nothing else, it’s definitely got a cast full of award winners like Bradley Cooper, Cate Blanchett, Willem Dafoe, Toni Collette, and more. Based on a William Lindsay Gresham novel of the same name, the film follows a manipulative carnival worker who teams up with a psychiatrist to wreak havoc. This being del Toro, expect stunning visuals, a deeply sympathetic narrative, and striking horror imagery that is sure to stick with audiences all the way through the holiday season.