Taika Waititi's vampire mockumentary brilliantly crosses the comedy of Flight of the Conchords with the films of Christopher Guest.

Flight Of The Conchords’ eponymous HBO vehicle was about a deadpan immigrant duo who led lives of perverse banality despite being handsome, charming, talented, and dynamic rock stars. Band members Jemaine Clement and Bret Mckenzie ended the show when it seemingly had at least a few seasons left in it, but considering the insane workload endemic in creating both a TV series and a never-ending stream of new music to accompany it, you can’t really begrudge the gents for going out on top.

Clement and Mackenzie have done well since the show ended. Mackenzie won an Academy Award for his songwriting work on The Muppets and Clement has thrived in film — his flashy, out-of-character villain turn helped make Men In Black III better than it had any right to be, and in Gentleman Broncos he gave a great performance in a terrible movie.

But Clement’s biggest post-Conchords triumph is undoubtedly his co-directorial debut What We Do In The Shadows, in no small part because it reflects the Flight Of The Conchords sensibility so purely. True, the film finds Clement working with rising writer/director/star Taika Waititi, but Waititi worked extensively on Conchords, and his chemistry with Clement is just as strong as Clement’s chemistry with Mackenzie, which perhaps should not be surprising, considering Waititi and Clement once had a comedy duo of their own called The Humourbeasts.

While Flight Of The Conchords concerned itself with the incongruously mild misadventures of a pair of unassuming blokes who are also talented rock stars, Shadows is about vampires, the blood-sucking, hard-living, over-sexed rock stars of the supernatural world. And because this is a Jemaine Clement movie, these vampires do things like ride buses, argue about chores, and frequent tacky nightclubs.

Waititi stars as Viago, a nearly four hundred-year-old vampire and all-around fussbudget — he’s the Felix Unger of the undead world — still trying to find a way to be with a soulmate who, in a complete reversal of Matthew McConaughey’s oft-quoted line in Dazed and Confused, keeps getting older while he stays the same age.

Waititi brings a disarming sweetness to the role. With his cherubic babyface, he at times suggests a New Zealand version of Andy Kaufman, with all of the manic, child-like exuberance and none of the angsty provocation. That sweetness and the core of genuine romantic yearning underpinning Viago’s seemingly doomed love lends an underlying emotional element to what otherwise could just have been a mere joke-fest. That is not to say that Shadows is lacking in jokes. On the contrary, it’s pretty much wall-to-wall jokes, but thanks to Waiiti’s moon-faced innocence, it’s about something more than just delivering a never-ending stream of big laughs.

Thematically and structurally, co-writers, co-directors, and co-leads Waititi and Clement don’t just borrow a few pages from the Christopher Guest playbook so much as they steal the whole damn thing. Like Guest’s most celebrated films (I’m specifically not talking to you, Almost Heroes), it’s a mockumentary that delves into an insular, hermetic world filled with colorful caricatures, obsessives, and exquisitely unselfconscious goofballs oblivious to how the world sees them. Also like Guest’s films, the movie documents the furious activity leading up to a climactic event.

Here the event in question is an “Unholy Masquerade” that brings together blood-suckers, werewolves, zombies, and other things that go bump in the night. The film’s premise is that a documentary group protected by crucifixes has been given access to a secret society of vampires in the months leading up to the celebration.

We open on Viago awaking at 6 PM, checking that the sun is down, and then waking up his housemates, but not before pointedly explaining to the audience that he shares a house with other vampires because he enjoys the company, and, with touching sincerity, “I just really like having a good time with my friends.”

In Shadows, a vampire’s life is about trying to balance the insatiable need for blood with responsibilities like taking out the trash, cleaning dishes, and generally behaving like a considerate housemate. The funky interplay between the mundane and the fantastical continues as we’re introduced to our leads’ superhero-style origin stories. We learn Deacon was a Nazi vampire, something that was doubly frowned upon by good people after Germany lost World War II. Vladislav was turned when he was sixteen and had to curb his once-strong appetite for torturing and murdering masses.

Viago, meanwhile, came to New Zealand for love. He fell for a human woman whose family was emigrating to New Zealand and instructed his servant to send him to New Zealand to woo her. Alas, the servant put the wrong postage on the coffin, delaying Viago’s arrival for 18 months, at which point the object of his affection had found someone else. As origin stories for supernatural star-crossed love go, this is both operatic and adorably rooted in human error.

Shadows has enormous fun integrating vampire mythology into its wonderfully banal universe. We learn, for example, that Deacon has an exquisitely passive-aggressive relationship with Jackie (Jackie Van Beek), his “familiar,” a stubborn human woman hoping to prove herself to Deacon so he will turn her into a vampire and grant her eternal life. As one might expect from a former Nazi, Deacon abuses his power to get his wanna-be to do as much as possible for him without giving anything back in return. It is an utterly ridiculous relationship, but the emotions at play are real, and that makes everything funnier.

Like Guest’s films, Shadows embraces the comedy of awkwardness. The relationship between Deacon and his familiar is wonderfully tense, as is a set-piece where she invites a man named Nick (Cori Gonzalez-Macuer) and another woman to the vampire lair, ostensibly for a dinner party, but really so that their vampire hosts can feast on their blood.

The evening results in the foursome acquiring a new vampire in Nick, a Bro who is really into flying but isn’t too keen on the whole discretion thing. This new, expanded version of the crew has a run-in with a pack of werewolves, led by Rhys Darby, who are, if anything, even more concerned with appearances than Viago. When some of his pack curse, his milquetoast head werewolf schoolmarmishly reminds them, “We’re werewolves, not swearwolves.”

The film’s final act centers on the Unholy Masquerade and the revelation that “the Beast,” rather than a demonic figure of pure evil, is actually Vladislav’s ex-girlfriend Pauline, who understandably did not appreciate her unflattering nickname and left Vladislav impaled on a night post during their violent breakup.

The immortality of vampires can’t help but cast our own mortality in a starker, more dramatic light. That’s true even of a goofy romp like Shadows. When Stu appears to be destroyed by werewolves, it’s genuinely sad, and prompts a monologue on the fragility of life (at least among the mortal) from Deacon, of all people, that’s both melancholy and hilarious. Deacon’s monologue begins comically tone-deaf but grows accidentally poignant as a meditation on the nature of aging and mortality and death, of the agony of watching someone you love wither and decay and lose their faculties until, “You wish they were dead, and then they do die.” But it doesn’t take long for the tone to shift back to gleeful absurdity when Deacon then proposes that Stu’s loss is mitigated by the fact that he clearly died the way he desired: being “disembowled by werewolves.”

When Viago ends up with his long-ago, long-in-the-tooth soulmate, it’s similarly genuinely touching. Outsized, melodramatic romances that stretch beyond time, geography, and morality are a fixture of vampire stories, particularly of the gothic romantic variety. Here, they amount to a profoundly dysfunctional relationship between an aging woman and a vampire who waited close to a century so he could finally woo her. These men might be monsters, but they’re also the kind of true romantics who never got over having their hearts being broken long ago. Shadows is one of the funniest films of the decade, but it also has a heart; the abundant laughs here are rooted in character and relationships more than they are in jokes.

Not surprisingly, the growing cult for Clement and Waititi’s deadpan laugh riot isn’t satisfied with merely re-watching and quoting the film. So the film’s universe is expanding with the announcement of a sequel/spin-off focused on werewolves and a television show in New Zealand focusing on cops, who play a small but memorable role in the proceedings here.

As for Waititi, he wrote and directed the critically acclaimed recent comedy Hunt For The Wilderpeople and is tackling a project at once utterly surprising and weirdly perfect for him. With a handful of modest but beloved cult comedies on his résumé, Waititi will be directing the third Thor movie, a cosmic buddy comedy following Thor and the Incredible Hulk on a trippy tour through the galaxy in the tradition of Midnight Run.

It’ll be fascinating to see if Waititi’s idiosyncratic genius comes through despite the commercial considerations and huge financial expectations greeting such an epic project. But I take comfort in knowing that, as he proved in Shadows, few filmmakers are more adept at getting big laughs out of the interplay between the fantastic and the mundane, or at articulating the surprising humanity of larger-than-life characters (in the Incredible Hulk’s case, way larger than life) who sometimes aren’t even human, yet reflect our foibles and insecurities and desires and fears all the same. 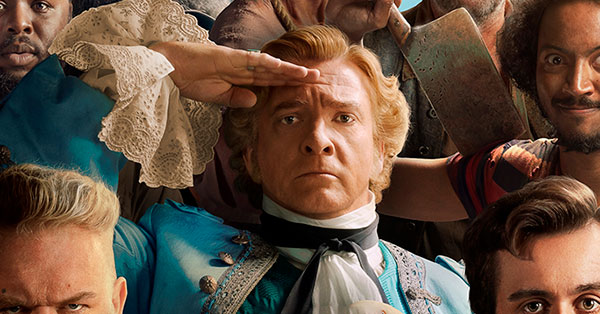 Taika Waititi, His Costars, and the Creators of Our Flag Means Death Offer 8 Things to Know About the Pirate Comedy