Weekend Box Office Results: Audiences Went to The Next Level for Jumanji

Plus, Frozen II and Knives Out hang on, while Richard Jewell and Black Christmas fail to make an impact on the weekend of December 13-15.

Movie audiences went to The Next Level this weekend, literally. The third Jumanji film was the clear victor, garnering the second-best opening of the holiday season to date with the further promise of solid returns through the Christmas vacation. Adult fare, on the other hand, hit the wall this week, unable to draw even $10 million between them as many may have chosen to avoid controversy and politics as part of their escapism. That said, there might still be interest in another film with those themes coming down the pike.

King of the Crop: Jumanji Destroys the Competition 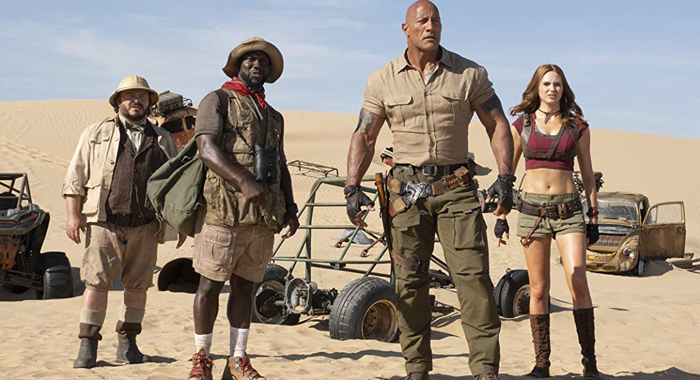 Jumanji: Welcome to the Jungle opened on a Wednesday, five days after the release of Star Wars: The Last Jedi, and in its first five days, it grossed $52.77 million. Jumanji: The Next Level took just three days to make $60 million, way ahead of its ultra-conservative estimates of just $35 million. That may only be the 13th best start for a film in the month of December, but if it follows suit with the other films like it, The Next Level should pass $200 million with no issue. Sony has a much higher number in mind, given that Jungle had the second-best December multiple of all time (after Avatar) when it earned 11.18 times its opening Fri-Sun weekend, amounting to over $400 million domestic. Another $557 million internationally gave the film enough ($962 million) to place among the Top 50 grossing films ever; a spot it is likely to relinquish soon after The Rise of Skywalker opens. Can The Next Level reach the $300 million level? Only 12 other films to have started in December (including the limited release of American Sniper, which broke through in January) have done it. Four are Lord of the Rings/Hobbit films, three are Star Wars, two are from James Cameron, and the others are Aquaman and Jumanji: Welcome to the Jungle. Budgeted at $125 million, The Next Level’s global total currently stands at $113 million and will have no problem turning a profit for Sony.

‘Tis the season not to release films about terrorist bombings and serial killers. It is hard to say whether or not the accompanying controversy over the portrayal of a journalist in Richard Jewell really kept people away, but a Clint Eastwood film without a big star at its center (like Tom Hanks, Bradley Cooper or… Clint Eastwood) is normally not a big draw. The last Eastwood film without any of those faces in front of the camera to gross over $50 million was 2003’s Mystic River. But the last of his films to open as weak as Jewell ($5 million) was, ironically, True Crime, back in 1999. Eastwood the actor only drew a $5.27 million opening for that February release, which went on to gross just $16.64 million. His Best Picture nominee, Letters from Iwo Jima, made just $13.75 million. Jewell may still find itself grossing over $20 million, but it will rank as one of the lowest-grossing wide releases of his career and one of the bigger losers, given its $45 million budget.

Then there is Black Christmas, the second remake of Bob Clark’s first great Christmas film from 1974. The 2006 remake opened to just $3.72 million and finished with $16.27 million. The 2019 version did not do much better, with a $4.4 million start after what turned out to be an against-the-odds projection of $10-12 million. Horror has not been a popular genre to release in December, and the numbers show why. Going all the way back to 1981, only three horror films have opened to more than $10 million in December (Scream 2, Krampus, and the 1998 remake of Psycho) and only four horror films have grossed over $30 million (Scream, Scream 2, Krampus, and Dracula 2000.) In Blumhouse fashion, the budget for Black Christmas was only $5 million, so it is not some major financial disaster, but if it fails to reach the $16 million benchmark set by the 2006 remake (Rotten at 14%), that has to stand as a big disappointment.

The Top 10 and Beyond: Frozen II Hangs on, Uncut Gems and Bombshell Are Solid in Limited Theaters

The champion of the past three weeks fell to second place, as Frozen II missed becoming the 45th film to gross more than $20 million in its fourth weekend of wide release, though its $19.18 million raised its tally to $366.54 million, which is the 19th best ever after 24 days. That’s about $9 million higher than The Hunger Games: Catching Fire had back in 2013, when it was the original Frozen’s November partner in grossing $400 million. Frozen II’s fourth weekend is also around $6 million more so we should expect no less than $430 million domestic in its pocket by the end of its run. Most importantly, though, Frozen II has become Disney’s 6th film this year to cross the billion-dollar mark which makes it the 38th highest-grossing film ever, and it will ultimately join the Top 25. The original Frozen currently ranks 15th, with $1.274 billion. Frozen II is only $242 million behind right now.

Then we have two films making their runs toward $100 million. Ford v Ferrari is nearly there after another $4.14 million this weekend. Its total stands at $98.2 million domestic, but it is the $175 million global tally that lingers for Fox, as that is still around $75 million behind where it needs to be to recoup its costs. Rian Johnson’s Knives Out is already into profit for Lionsgate and is now just trying to leg it out to the milestone. With $78.8 million so far, the murder mystery is hitching a ride on the numbers that Creed had at this point, within a million behind of both it’s 19-day tally and its third weekend. Creed finished with $109 million. That is a number that Ferrari is also headed towards and even with Knives a few million behind its pace it looks like it should still cross the finish line and may even pass Ferrari worldwide as it currently has $162 million.

The list of four-theater openings is a little steeper, but Jay Roach’s Bombshell nevertheless had a solid showing this weekend. With $312,000 the Fox News sexual harassment expose became the 15th best opening within that group ahead. Among the top 15 films in that group, 11 of them were nominated for Best Picture (with The Farewell TBD) including the aforementioned American Sniper (the all-time champ with $873,667) and Moonlight, which went on to win the Oscar, as did Birdman ($424,397).

Terrence Malick’s latest, A Hidden Life, had a less than great showing with just $52,000 in five theaters. That comes between his last two narrative releases, Song to Song ($50,559 / Rotten at 43%) and Knight of Cups ($60,551 / Rotten at 47%), which were only in four theaters initially. A Hidden Life’s PTA ($10,400) is the director’s third lowest since his return to cinema in 1998 with The Thin Red Line and could be second lowest if the estimates fall. This has to be cited as a big disappointment for Fox Searchlight, who released the three-hour film featuring his first positive score with critics (78%) since The Tree of Life in 2011. 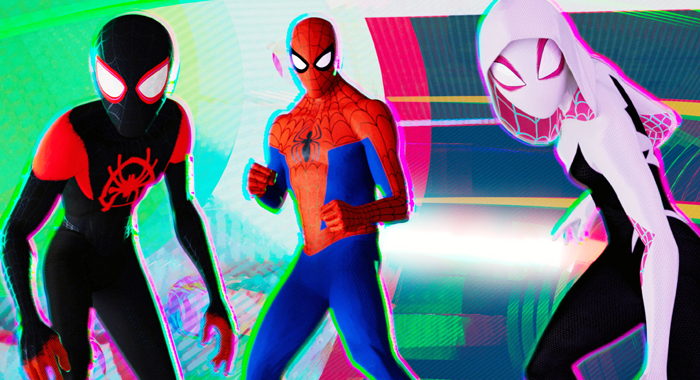 The Oscar winner for Best Animated Feature first took the #1 spot at the box office this weekend. Spider-Man: Into the Spider-Verse opened to $35.36 million, doubling the take by Clint Eastwood’s The Mule, which began with $17.50 million. In turn, Eastwood’s film more than doubled the start of Mortal Engines ($7.55 million) which ultimately barely doubled its opening weekend to become one of the biggest bombs of 2018. Both Fantastic Beasts: The Crimes of Grindelwald and Ralph Breaks the Internet passed $150 million, and Creed II got over $100 million. James Wan’s Aquaman earned $2.9 million in special previews and that was good enough to grab the tenth slot on the list. Barry Jenkins’ If Beale Street Could Talk opened to $224,476 in four theaters, which amounted to the eighth best per-theater-average of the year. The Top Ten films grossed $101.64 million and averaged 67% on the Tomatometer.

On the Vine: Jumanji Is Back, Along with a Slew of Awards Hopefuls 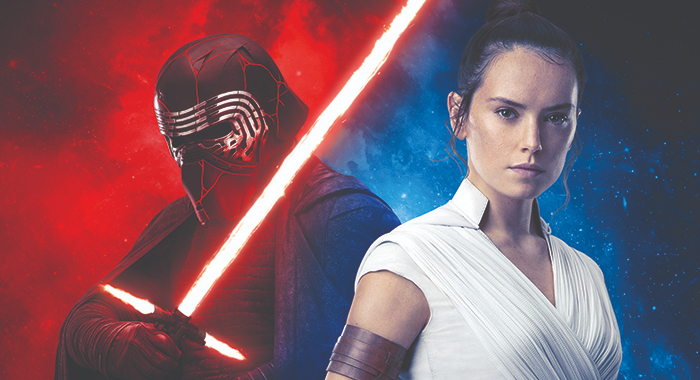 The week fans both young and old have been waiting decades for is finally here: The big-screen adaptation of Andrew Lloyd Webber’s Cats arrives to storm the box office with its blend of live-action FX wizardry and angel-like lyrics. All kidding aside, while that all remains to be seen, it is also the week that the Skywalker Saga comes to an end. For years, fans all over the world have been anticipating the conclusion of the nine-film arc that George Lucas hinted at so many years ago. And now Star Wars: The Rise of Skywalker, Episode IX of the series, arrives and will undoubtedly be one of the biggest hits of 2019 and ultimately give Disney its 7th billion-dollar film of the year and push their grosses to over $11 billion.