Season closes with introduction of Meyers as Bishop Heahmund, who is destined to meet Ivar face to face 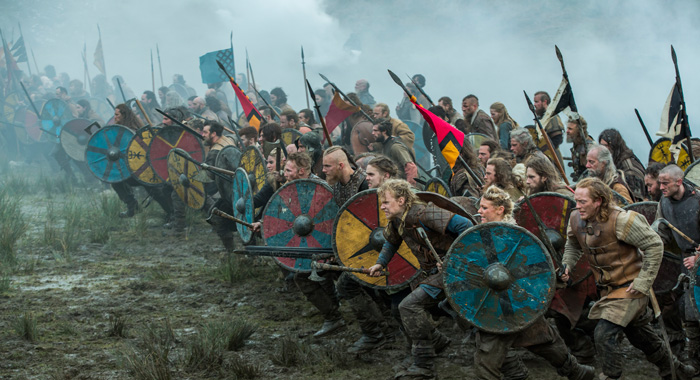 The gods have spoken and another season of History’s Vikings comes to a gripping end. We knew coming into “The Reckoning” that not everyone would make it out of season 4 alive, and the episode did not disappoint. Showrunner and series creator Michael Hirst talked to Rotten Tomatoes about the finale and set up season 5.

STOP HERE IF YOU HAVEN’T WATCHED THE SEASON 4 FINALE OF VIKINGS.

In the episode, the sons of Ragnar Lothbrok (Travis Fimmel) successfully usurp King Ecbert (Linus Roache) after a bloody battle, but allow him to take his own life after he signs over East Anglia. Unbeknownst to them, however, he has abdicated the throne to his son Aethelwulf (Moe Dunford) and does not have the power to gift them the land.

Later in celebration, Ivar the Boneless (Alex Høgh Andersen) loses his temper when his brothers reveal they no longer want to take to the battlefield and instead want to sail to the Mediterranean or settle and farm. Furious Ivar lets his axe fly, killing his brother Sigurd (David Lindström).

Far off in England is the newly introduced Bishop Heahmund (Jonathan Rhys Meyers), who Hirst assures will one day meet Ivar face to face.

Hirst spoke with Rotten Tomatoes to reflect on season 4’s bevy of surprising deaths, how the great Ragnar will never truly die, and what role Heahmund will play going into next season. 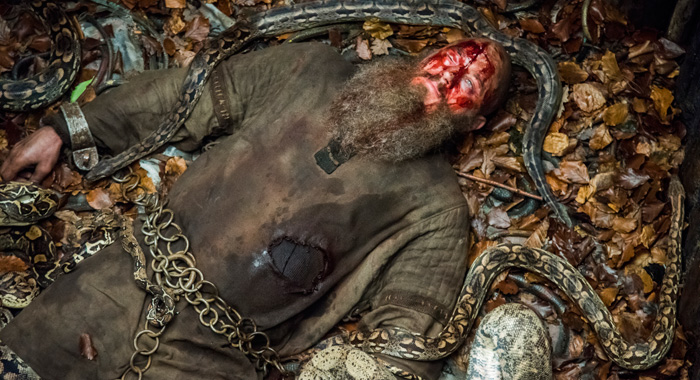 Benjamin Lindsay for Rotten Tomatoes: Were you sad to part ways with Ragnar and now Ecbert this season?
Hirst: Yes, of course. I mean, this season, I’ve said goodbye to Ragnar and to Ecbert — two of my greatest characters. Two actors, as well, that I’ve just loved their work. They complemented each other so well. They were so different, but they had so much in common, and it was a great privilege to work with both of them.

But yeah, I was there when Ragnar was up in the cage on a terrible wet and windy Irish day last winter, and Travis and I had spent a long time in deep discussions — and with Linus, actually — about those last episodes, his last scenes, and everything. So it was very meaningful. It was very deep. It was very difficult.

It was actually equally sad to say goodbye in this last episode to Ecbert, who in a different way has sort of crept on me and become one of the big characters of the show. Linus is a great, great actor. I always think about it like Linus is the kind of Shakespearean actor, and Travis was the authentic actor, and yet, they both brought something so intense and powerful and real to the show. So it’s been an emotional roller coaster for me, absolutely.

RT: It’s funny, because the last time we spoke, you’d said episodes 14 and 15 were the best you’ve ever done on TV because they brought these two characters back together.
Hirst: Those two episodes are still amongst my favorite ever. It was a very intense period of discussing and realizing them. I love collaborating. I love the fact that we were all together discussing these moments and these deaths, and the actors were as invested as I was in this. I think we realized what we wanted to realize. I think it was deep and powerful and memorable. 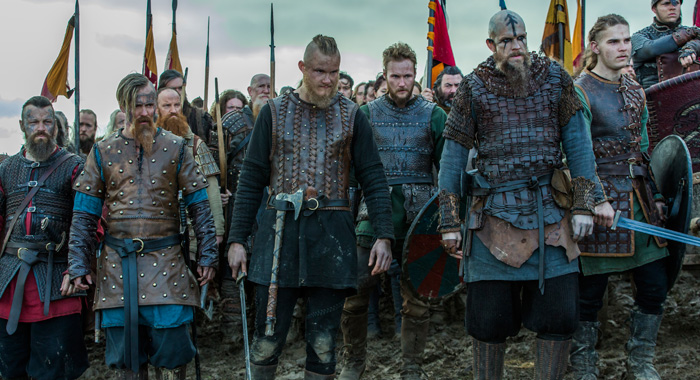 RT: But there are echoes, of course, of Ragnar in his sons. That’s been one of my greatest joys this season: Now that they’re coming into their own, getting to see their dynamics play out onscreen. What’s been your favorite part about being able to tell the next generation’s story in this half of Season 4?
Hirst: This was always, for me, the saga of Ragnar and his sons. I knew enough about the history that his sons — some of them anyway — had actually done extraordinary things and had become in the Viking world as famous as Ragnar. So for me, this was always the story of Ragnar and his sons and never just the story of Ragnar. So you know how it is with the networks and things, and you say, “OK, we’re going to kill what some people think of as the lead character.” And it’s like, “Oh no! Can we keep him alive? People won’t watch it anymore. You can’t kill your lead character.” And I said, “I can. I can kill my lead character.”

This is not the story of Ragnar Lothbrok; however, Ragnar will never die. You think I’m killing Ragnar? I am killing Ragnar, but he will never die because he will live on through his sons. He will live on through at least two of them. Bjorn and Ubbe will always believe what Ragnar believed: That the thing to do is to establish colonies in different lands [and] to find rich land for farming. They will not let that dream go. And Ragnar will always be an inspiration, especially if they become famous as the sons of Ragnar, so wherever they go, people will say, “They are the sons of Ragnar.” So Ragnar doesn’t disappear. Actually, in pretty much the same way that Athelstan hasn’t disappeared from the show. His ghost, his presence — he’s still there. And so Ragnar doesn’t disappear.

Nonetheless, it was a challenge to hand over to the sons. But, of course, I wanted to do the Great Heathen Army. I mean, who didn’t want to do that? So Ragnar dies, and then what happens? People want to know what happened after that. You’re feeding a curiosity anyway. I think the audiences are really curious about the sons. I mean, we still have some of the old guard, but now we have Ivar the Boneless. It’s just, my God, we have something amazing to move forward with. 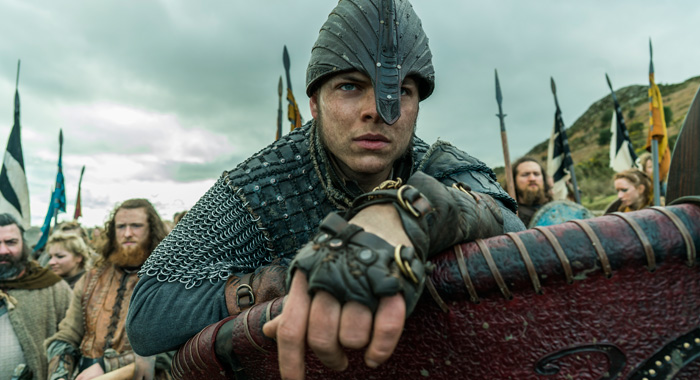 RT: In terms of Ragnar still being a part of the show, I think with Ivar in particular, you see his military calculation and cunning come into play in these final episodes, all of which were very much passed down by his father. Was it exciting for you to set the stage for him this season?
Hirst: Of course. I knew a little bit about Ivar the Boneless before I started writing the show because I come from Yorkshire and Ivar conquered York, but I only knew him by reputation, so it’s been great to dig down a little more. Ivar’s story is fascinating however you look at it. Someone who is so disadvantaged who then became so powerful is always an interesting trajectory for a writer.

One of the great things about Vikings that you don’t find in many other shows is we have children that grow into adults. We’ve seen Ivar. We’ve seen the ambivalence of his brothers towards him. They love him on the one hand, but they also patronize him. We know that he’s unpredictable. We know that he’s lucky to be alive. And for me, part of that is that whatever he does, I never completely lose sympathy for him because I know what his background is, I know what his struggle is. I know the pain that he’s had to go through.

We did a lot of research at the studio on Brittle Bone Disease. We talked to people. If you’re young and anything you do is likely to lead to breaking a bone or two, you are angry. And so Ivar is an angry person, but because he can’t use his legs, he uses his head, and his intelligence is developed. So he’s the one that strategizes the most. He just thinks the story through. When you think about the Vikings, the cliché is that they’re thoughtless brutes, but here you have a very clever young man who can outthink some of the best Saxons and can lead the Vikings by his charisma and his thoughts. It’s great. 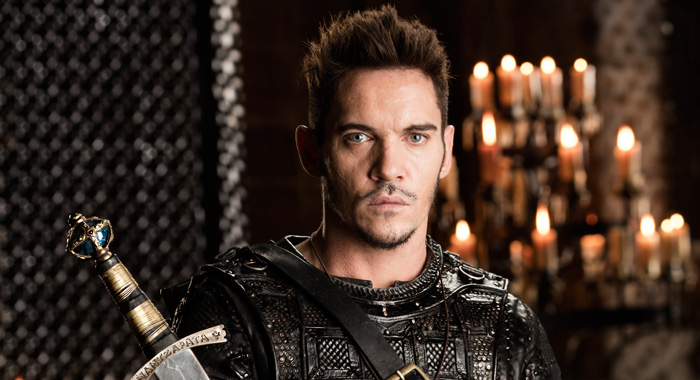 RT: I also wanted to, of course, talk to you about Jonathan Rhys Meyers. How did he come into the fold? What should we know about him going into season 5?
Hirst: I knew that in view of the success the Great Heathen Army and the Vikings militarily over the Saxons that I needed a Saxon warrior leader who could match them, who could stand up to them. What I discovered in my research were these people called warrior bishops. These are genuinely religious people. These were people high up in the church hierarchy, princes of the church — men of great learning who were also skilled swordsmen and fighters and were totally prepared to go and fight against the Heathen Army. In that sense, they were exact precursors to the Knights. So centuries before the Knights Templar, they were the model. And this guy, Bishop Heahmund was a historical character. We know that he actually died in battle. We know that he was a formidable figure. So I had my historical character.

Then when we cast Johnny, of course, that was wonderful because I knew Johnny from Tudors. He’s very charismatic, and there’s an element of this sort of madness about these characters. They’re sort of slightly unhinged characters because they’re so fundamentalist, they’re so prepared to die in battle for their faith. Johnny seemed to fit that bill, as well. And then there’s one other element: someone who was conflicted within themselves, someone who was a fundamentalist Christian who was totally fighting for Christ and was moral and everything, and yet was an essentialist who couldn’t help his attraction to women. St. Augustine describes how he would punish himself for this flaw in this character. He would punish himself in extreme ways. I just saw this character as someone who is so interesting and powerful and flawed and charismatic and conflicted. I wanted to bring him on.

And I wanted, even in the short space of time that you know him at the end of season 4, I wanted people to feel that maybe this character had a big role to play going forward (which he does), and that in the end, he was bound to intersect with Ivar. There are elements to Ivar that are similar: the conflicted person, the fundamentalist. I think you just feel that there is something inevitable about those two characters coming together, which they will. 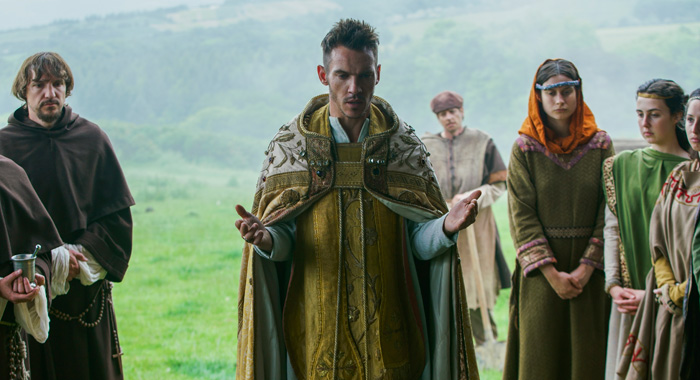 RT: Can we safely say that Heahmund is going to be a formidable adversary for Ivar?
Hirst: Yeah, that’s what he’s been set up to be. That’s what the Saxons need. I wasn’t responding to anything directly on social media because I don’t read social media, but people have occasionally told me that there are Christian clerics around, particularly in America, who’ve complained that the Saxons are virile enough — that the Vikings have the best of the argument all the time, that their warriors are always more powerful, that the Christian Saxons seem rather feeble.

I don’t, myself, believe that because I don’t think that Aethelwulf is feeble, and I don’t think, actually, that Aethelred was feeble. But I still felt the need, I recognized the need to have a symbolically powerful Saxon warrior leader figure, and in the time of the greatest crisis for the Saxon world in England, here comes Bishop Heahmund.

RT: Going into season 5, if you were to name one character that we should take a closer look at in this hiatus, who would I be?
Hirst: I think I would have to say that Ivar is a new, great character. If you thought that Ragnar was great and astonishing, you will certainly see that his son Ivar matches up to him and is also a completely astonishing figure.