With Tron Legacy hitting theaters, we present a brief history of computers in the movies.

Well, Tron fans, your wait for a sequel is finally almost over: this Friday, nearly three decades after puzzled filmgoers shrugged off the Disney cult classic, we get our long-delayed second dose of lightcycles, deadly discs, and skin-tight glowing bodysuits in the form of Tron Legacy. Of course, our concept of the computer (and our knowledge of what it can actually do) has changed quite a bit since 1982, but Tron actually got a lot of things right — and to put it all in perspective, we thought it would be fun to spend this week’s feature taking a look back at some other computer-driven films. Which ones came closest to reality? Which ones got things most hilariously wrong? And which ones gave us glimpses at a future we’re still waiting for? It’s time to boot up another edition of Total Recall!

In the midst of our Cold War paranoia, this techno-thriller (starring future Young & the Restless mainstay Eric Braeden) gave audiences a pair of supercomputers — one American, one Soviet — that followed their defense programming to its logical conclusion: war is dumb, humans make war, and therefore humans must be controlled. Though the upcoming remake, with Will Smith attached to star, will doubtless put a more optimistic spin on Colossus‘ chilling ending, it won’t change the original’s cult status with sci-fi fans and critics like SFX’s Ian Berriman, who called it “A crisp, well-crafted movie that achieves its effects by calmly stating the facts, with the bare minimum of histrionics.”

The first movie to use the word “computer” in its title — and the first installment in a trilogy that would later see Kurt Russell gain invisibility and superhuman strength — 1969’s The Computer Wore Tennis Shoes takes place in a world where a power surge somehow triggers a mind meld between a college student (Russell) and, well, a computer. As irredeemably silly as any of Disney’s other live-action offerings from the era, Tennis Shoes didn’t win many critical converts (Variety, in one of the few positive reviews, referred to it as “above average family entertainment”), but it’s become something of a cult classic — as evidenced by the 1995 TV remake, starring Kirk Cameron.

How little did we know about computers in 1984? Little enough that this goofy little sci-fi/comedy/romance/thriller hybrid could program its way into theaters without being immediately laughed onto home video. Starring a young Virginia Madsen, Electric Dreams revolves around the travails of an inventor (Lenny Von Dohlen) who purchases a home computer (voiced by Bud Cort) that achieves sentience after he spills champagne on it. As if that weren’t silly enough, the computer (which calls itself Edgar) also develops something of a crush on the next-door neighbor (Madsen) — and after its overtures are spurned, writes a Giorgio Moroder song as a synthy farewell. Most critics were quick to find the flaws in Dreams‘ rather disjointed screenplay, but Roger Ebert was one of its defenders, noting, “It’s not often that a modern movie has the courage to give us a hero who doesn’t seem to be a cross between a disco god and an aerobics instructor, but the Von Dohlen character is a nice change.”

Boasting the tagline “Boot up or shut up! On line this fall,” posters for 1995’s Hackers promised slick, futuristic action — and, as is so dreadfully often the case, delivered a muddled assortment of computer culture cliches and plot points whose wild implausibility indicated a complete misunderstanding of the way technology works. However unlikely the events of the storyline, some critics enjoyed this tale of teen computer whizzes (led by Jonny Lee Miller and Angelina Jolie) and their battle against a swindling security expert (Fisher Stevens) — including Christopher Null of Filmcritic, who chuckled, “The real draw to Hackers is that it is so unexpectedly funny. Really funny. The comic scenes with the kids (and there are lots of them) are totally hilarious. The ‘serious’ scenes are too, because they are often so ridiculous.”

A sort of Flowers for Algernon with CGI and ill-advised sex, The Lawnmower Man takes the tiniest sliver of a Stephen King story and turns it into a whacked-out sci-fi thriller about a scientist (Pierce Brosnan) whose experiments on a disabled gardener (Jeff Fahey) turn him into a super-powered sociopath with a thirst for revenge on those who wronged him — and a daffy plan to enter virtual reality and become pure energy. King sued repeatedly to remove his name from the movie, but it attracted enough of an audience to inspire a direct-to-video sequel — and it earned limited admiration from critics like Mark Leeper, who wrote, “If the plot is overly predictable — and believe me, it is — the computer graphics are spectacular.”

We’ve seen a lot of movies about computers taking over the world, and most of them (such as The Terminator) imagine an apocalyptic future in which hopelessly outgunned human freedom fighters wage an endless war against their binary overlords. All those ingredients are present in The Matrix, but with a nifty twist: most of the human race is being kept in pods, duped into experiencing a false reality while they unwittingly provide energy for the machines. It was a story big enough for a trilogy — not to mention assorted comic books, video games, and anime shorts — and whether the Wachowski brothers really ever managed to tie all of its ideas together is debatable. But for one shining moment in 1999, The Matrix blended thought-provoking philosophical questions with eye-popping special effects, and made us want to believe in a world where Keanu Reeves could be our only hope. “A wild ride, and worth the ticket price if only for the first-rate special effects,” wrote Jeffrey Overstreet of Looking Closer, adding, “There’s enough visionary work here to hold your attention for all 130 minutes.”

A year after Sandra Bullock thrilled audiences with Keanu Reeves in Speed, she suckered $110 million worth of them into seeing The Net, a frightfully silly thriller about a shut-in telecommuter (Sandra Bullock) whose lack of real-world relationships is exploited by a devious software engineer (Jeremy Northam) who needs only three days to steal her car, put her house on the market, and give her job to a doppelganger. Also in the mix? A group of nefarious hackers whose membership includes a fellow calling himself “Cyberbob.” No, the Internet never really worked this way — but in 1995, it all still seemed possible to plenty of people, including Caryn James of the New York Times, who approvingly wrote, “The Net is never quite as sleek and chilling as it might have been, but it gives the old story of a wrongly accused innocent a nerve-wracking ’90s twist.”

One of a handful of movies about computers gaining sentience through questionable means, Short Circuit follows the misadventures of a military robot who, after being struck by lightning, grows a personality — and powers strong enough to help El DeBarge score a Top 5 hit with one of the goofiest songs of the 1980s. Starring Ally Sheedy, Steve Guttenberg, and Fisher Stevens (with one of the decade’s silliest accents), this was another far-fetched computer tale for WarGames director John Badham — and a hit with critics like Derek Adams of Time Out, who called the anti-military-industrial complex comedy “a message film to please all ages.”

Other computers may have done cooler stuff, with more impressive special effects, but only HAL 9000 can boast the accomplishment of having walked off with all the coolest lines in 2001: A Space Odyssey — and it isn’t like there was a whole lot of dialogue to go around. Voiced by Douglas Rain in the film (as well as its 1984 sequel, 2010: The Year We Make Contact), HAL was responsible for some pretty heinous stuff, including the deaths of most of the crew on board the Discovery. Later, of course, it was discovered that HAL’s actions were the result of faulty programming, but whether or not the all-seeing red orb was a willing antagonist, it was an important part of what the Chicago Tribune’s Michael Wilmington called “an extraordinary, obsessive, beautiful work of art.”

Utter the phrase “How about a nice game of chess?” to any child of the 1980s, and you’ll get an instant education in the enduring appeal of WarGames, an admittedly far-fetched thriller about a budding hacker (Matthew Broderick) who uses a home-brewed modem setup to tunnel into a NORAD program and accidentally send the world to the brink of World War III. Featuring vintage John Badham direction, a perfectly electronic score, and a quintessentially ’80s cast rounded out by Ally Sheedy, Dabney Coleman, and Barry Corbin, WarGames gave arcade-busting nerds all over the world something to aspire to — and was, in the words of About.com’s Fred Topel, “a classic techno-thriller.”

Take a look through the rest of our Total Recall archives. And don’t forget to check out the reviews for Tron Legacy, as well as our feature on ten fictional games we wish were real.

Finally, here’s the trailer for the original Tron: 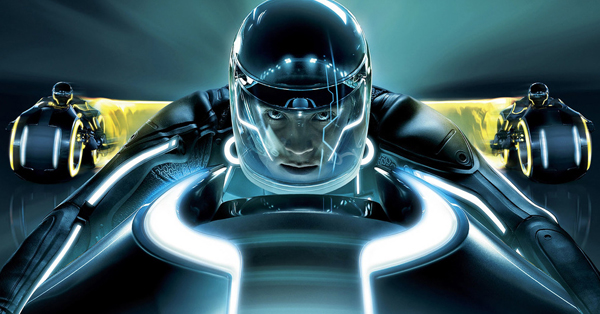 Hear Us Out: Tron: Legacy Is a Modern Classic In Its Own Right