This Is Us: 6 Things To Know About Season 5

Creator Dan Fogelman and the cast on Randall and Kevin’s feud and covering Black Lives Matter and the coronavirus pandemic.

NBC’s This Is Us has covered heavy topics like alcoholism, death, aging, PTSD, survivor’s remorse, and racism all under the guise of being a tear-jerking drama about a family reaching milestones in their lives. They’re they Pearsons and they care about each other a lot.

And, like in a lot of families, these characters may also be known to hold some grudges.

Last season’s finale came with a showdown between brothers Kevin (Justin Hartley) and Randall (Sterling K. Brown) over the proper way to handle treatment for their mother Rebecca, (Mandy Moore), who has Alzheimer’s disease. But it was also about the animosity that has been brewing since — as Kevin declared at one point during the fight — their parents brought Randall home from the hospital.

This Is Us creator Dan Fogelman, as well as Hartley, Brown, and the other series stars, joined journalists for a Zoom press conference in preparation for the 2-hour season 5 premiere on Tuesday. They discussed the aftermath of the fight, as well as how the show will handle topical issues like the Black Lives Matter movement and the coronavirus pandemic and whether next year’s sixth season really will be the final year for the ratings juggernaut.

Here are some key takeaways.

1. Kevin and Randall Will Be at Odds for a While 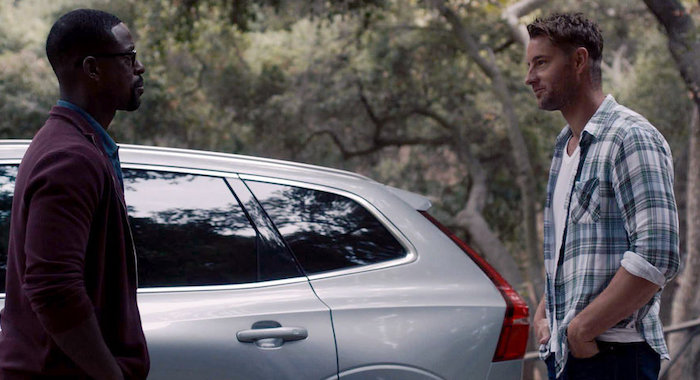 “When we took the fight to that place, it was never intended to be that they make up over the next week or the next episode,” Fogelman said. “That’s a fight that’s been building for 40 years between these two boys, and now men, who grew up in the same household.”

Hartley noted that the fight was “wasn’t screaming, it wasn’t out-of-control, it wasn’t manic. It was a calculated statement that Randall made to Kevin and then Kevin made to Randall.”

“Sometimes when you have fights like that … it takes like an event … to bring people back together,” he said, adding that “we’ll find out throughout the season, but I don’t know how motivated both men are to reconcile.”

A teaser released last week showed Hartley’s Kevin in a face mask as his sister Kate, played by Chrissy Metz, demanded he social distance from her. And the topics of classism and racism have always been part of the story, particularly when it comes to Brown’s Randall and his family. But, largely, Fogeman said, “our choice was always … to be apolitical. We don’t speak of, you know, Democrat or Republican or you-know-who on the show. It’s more about just American life.”

Fogelman added, however, that he’s been working on the first two episodes of this season since February and that “we were making the decision to kind of have COVID as well as Black Lives Matter, and it woven into the show.”

“When I was sitting down and weighing the decision of what we were going to do, just considering where our show lives with, like, this American family that has a lot of different pockets, and a lot of spans time, it felt almost irresponsible not to kind of take on the moment,” he said. “And I think you’ll find when you see the episodes of the show that it very much lives in that same space of the show, where you’re talking about the human experience, and not the political experience.” 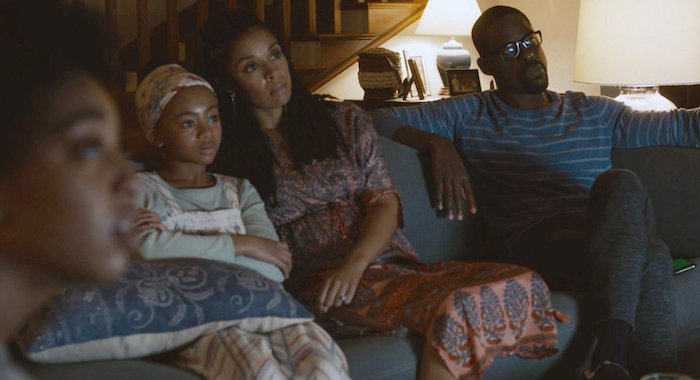 Susan Kelechi Watson, who plays Randall’s wife Beth, says that this will include talking about BLM with the couples’ two daughters and that “as Black as Randall and Beth are, they’re not experts on how to metabolize all that tragedy.”

“I think there’s a way that they deal with it with their kids that is sort of honest and they get to see the parents kind of grapple with it as they’re grappling with it,” she continued, adding that they “have an honest conversation about it. And they’re the type of parents who, I think, invite their kids into that. It’s not something that they would necessarily shield them from, but try to guide them through.”

It also provides a unique moment for Randall, Brown said, because he is a Black person who was raised in a white household.

“It’s such a unique perspective for someone like Randall, who’s always sort of questioning his identity as it is,” Brown says, explaining that he was “never wavering from the fact that he knows that he is Black. But the way in which he was raised, and the conversations that happened in his house, are not necessarily representative of the conversations that he wants to have with his children.”

3. Is This Why NBC Moved Up the Season 5 Premiere Date? 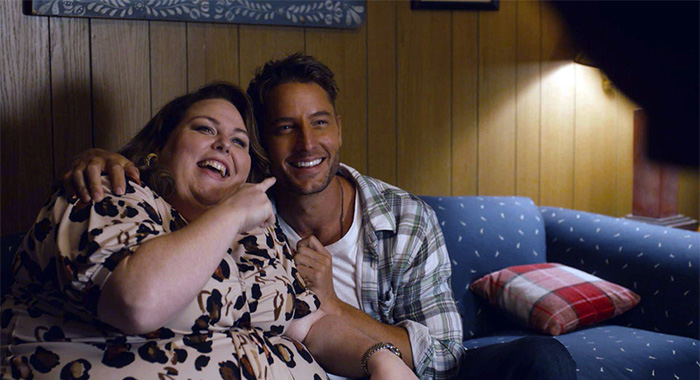 The fifth season of This Is Us was supposed to premiere in November, after the election. But Fogelman said “it was really important to me, and to us, to get these episodes on before the election — not because they’re political, but because I think they’re difficult and then hopeful. And it felt important to us to just put it on TV now with no agenda other than that. But it also created like an intense rush.”

4. The Family Cabin Will Also Be Utilized More This Season 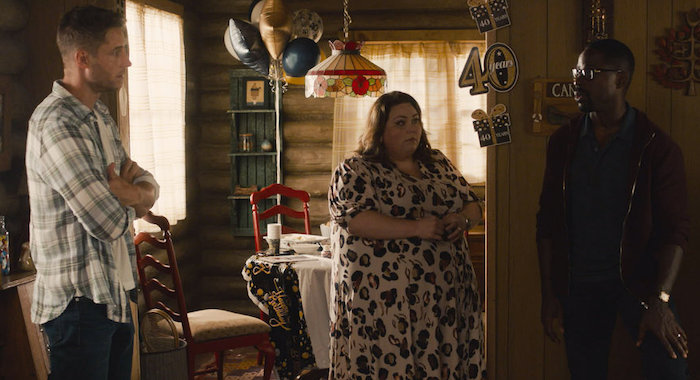 The Pearsons’ cabin has seen the family through a lot of highs and lows. Now, perhaps because of the coronavirus plot, Fogelman said that “we’re spending a lot of time in the family cabin this year, by design.”

5. Moore’s Real-Life Pregnancy Has Not Affected the Show’s Plot and Filming 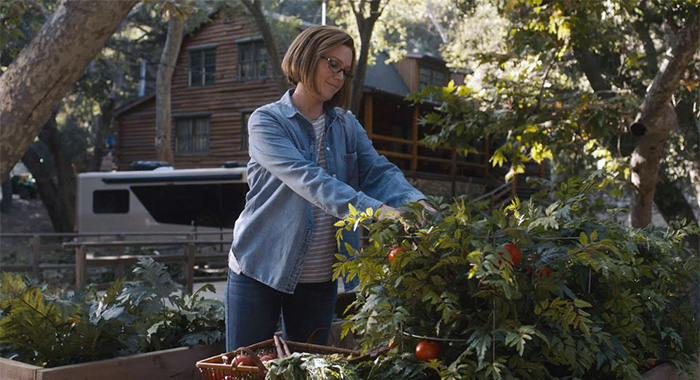 “We haven’t really adjusted our plan,” Fogelman revealed and said that “we are so far ahead in script that we can compensate for things as need be.” But because the show famously flashes in and out of the present time, “there may be a brief period … where you don’t see a lot of old Rebecca on the show because she would have some really complicated explaining to do.”

6. Fogelman Still Has the Same Series End Date in Mind 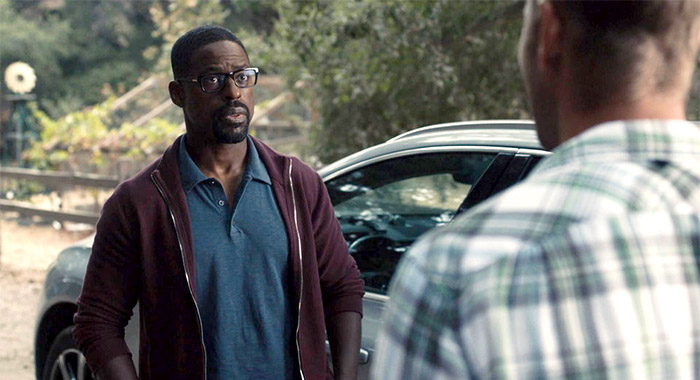 This Is Us has already been renewed for a sixth season. Fogelman was hesitant to address if there were more seasons beyond that, but did say that “our plan is not changed for the show.”

This Is Us season 5 kicks off on NBC with a two-hour premiere, starting at 9 p.m. on Tuesday, October 27