This Friday, the Wheel at long last turns for Amazon’s adaptation of The Wheel of Time. Based on the novels of Robert Jordan, it promises to be the next great fantasy TV saga. It has plenty of magic, beloved characters — and beloved relationships between them – and even the promise of alternate realities. And if you look at the trailers, it definitely feels like it is standing the ground Game of Thrones once did with some of that Witcher-style enthusiasm for magic.

But, then again, The Wheel of Time predates them both (more or less) as Jordan released the first novel, The Eye of the World, in 1990. In the subsequent 11 novels published in his lifetime, he built a universe so sprawling, writer Brandon Sanderson (who took over after the author’s death) needed to break the final novel into three books. 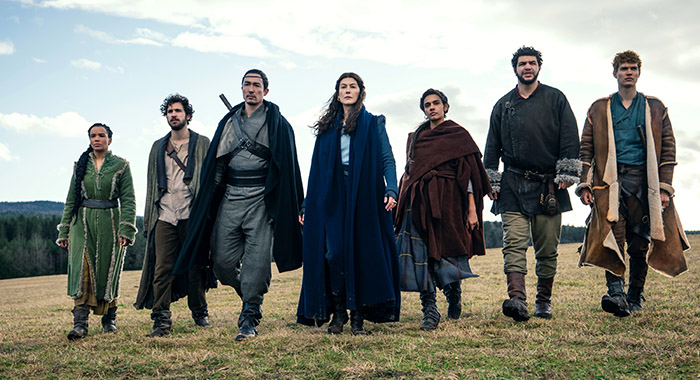 Like Thrones before it, much of the buzz surrounding The Wheel of Time comes from a passionate pre-existing fanbase anxious to see Moiraine (Rosamund Pike), Lan (Daniel Henney), Egwene (Madeleine Madden), Rand (Josha Stradowski), Perrin (Marcus Rutherford), and Mat (Barney Harris) set off on their journey. Also like those Ice and Fire fans, the Wheel faithful look forward to seeing newcomers’ reactions to momentous events as they unfold. Indeed, those newcomers are important to making the series work.

As executive producer Rafe Judkins told Rotten Tomatoes, everyone is “welcome in the world of Wheel of Time too, even if you haven’t read the books.”

“That’s the thing that’s exciting: knowing that there’s something that 90 million people around the world have read and that it’s sitting there and all of this incredible stuff is waiting for you,” he continued. At the same time, he acknowledged many people came to the novel series at “an important time in their lives” and that “obviously that’s a huge burden that I have to bear.

“I will never be able to deliver on exactly what they see and feel in their own mind and heart. But what’s exciting is that hopefully if I can bring the core of what makes people love the books to screen,” he said. With that in mind, he also said the first season (the second is already filming) will feel more like “the whole series of the books” even as it dramatizes events from The Eye of the World. 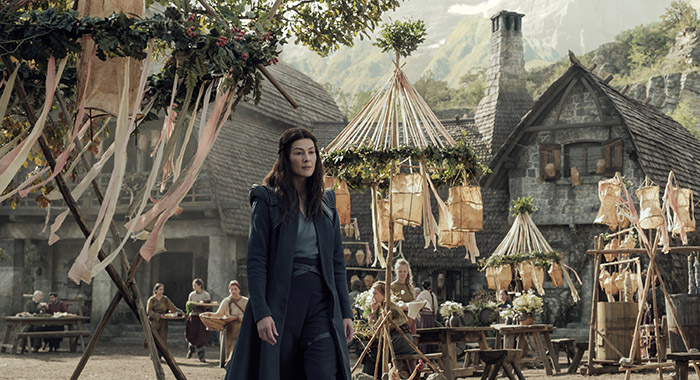 Set in an Medieval-looking world where magic is the purview of the all-female Aes Sedai, the series begins as Moiraine and other members of that order set out to find the Dragon Reborn – the reincarnation of a legendary hero who will either save or destroy the world. Moiraine’s journey leads her to Two Rivers, a peaceful village where five of its young people may be the fulfillment of the prophecy. Of course, she cannot tell which one is truly the Dragon, which complicates matters as they all set out to learn the truth. Also making things difficult: the returning army of an ancient evil bent on recreating the universe to its own dark design and the various political tensions of the realms they must cross.

Starting from Moiraine’s visit to Two Rivers is one of the first departures as The Eye of the World opens with two prologue scenes set much earlier in the series’ history. But when we spoke to Pike, it was a change she felt was appropriate to get to Moiraine and Two Rivers as quickly as possible. “I was speaking to a friend recently who said they didn’t get beyond that either [prologue] because there’s such a lot of lore and mythology,” she said. 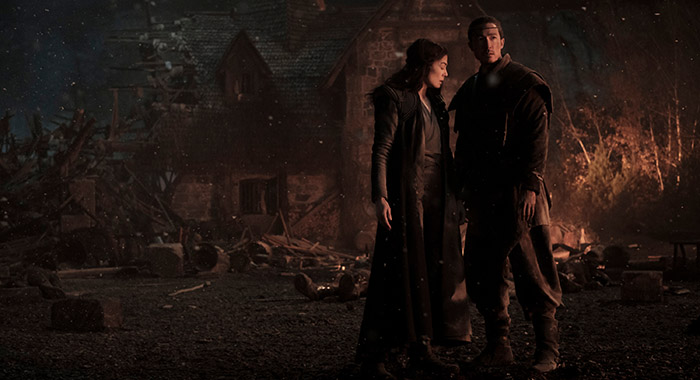 At the same time, a healthy amount of that lore is immediately present as well for those who wish to receive it.

“Anyone who’s a fan of fantasy understands that that’s hugely important to establish a solid fantasy book or series,” Henney said, who looked to the worldbuilding as one of the key attractions to The Wheel of Time both as a novel and television series. “The character development is [also] incredible.”

As viewers will see across the three episodes available on Friday, that initial character development in and near Two Rivers will lead almost immediately into the worldbuilding. Teasing some future events, Pike said “[It] just broadened and broadened and [Jordan’s] imagination gets bigger and bigger. And then, you suddenly get into the machinations of power and intrigue and factions build up and the main group splits. And there’s these forces of good and evil, and you don’t know where you stand with anybody. I think that one of the things that keeps you on your toes is that everybody has many, many layers and many different agendas.”

In the center stands Moiraine, who, as a member of the Aes Sedai, “always speaks the truth, but it may not always be the truth that you think you hear.”

“I was very drawn to this woman of mystery, this woman of tremendous power, but power that is counterbalanced by a kind of stillness,” she continued. “The world of The Wheel of Time is all about balance. I think balance comes into [Jordan’s] characters, too. So she’s obviously someone who can unleash mind-blowingly, staggering displays of power, but then that’s counterbalanced by someone who seems outwardly very calm.” 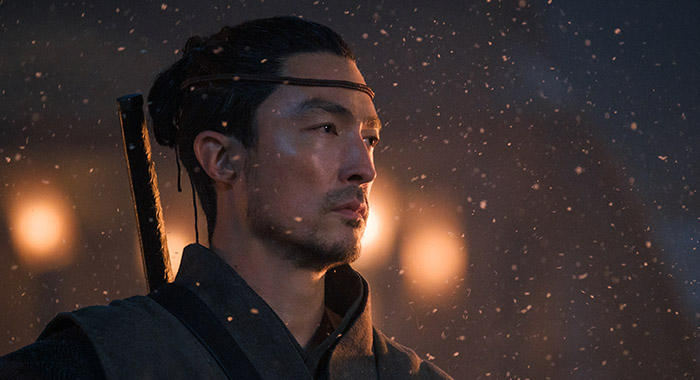 Always at her side is Lan, an orphaned heir of a fallen kingdom who trained to be a Warder — a male protector for a member of the Aes Sedai. “He’s haunted of what his past was,” Denney teased, although he was keen to avoid too many details as discovering elements of Lan’s past is one aspect of the journey viewers will take alongside him, Moiraine, and the Two Rivers crew. As any reader of the novels will tell you, it is a lot with surprising turns and revelations. For the moment, though, viewers new to The Wheel of Time will see him as Moiraine’s devoted guard.

The bond between Moiraine and Lan was another attraction for Pike.

“I’ve never put a relationship between a man and woman on screen like the Aes Sedai–Warder relationship,” she said. “[It] is intimate, fierce, loyal, committed, honorable, and non-sexual, and yet a deeply love thing. And I thought this was really cool. I think everybody’s going to watch season 1 and wish they had a Warder.”

Indeed, a quick glimpse at Twitter will reveal just how many fans are looking forward to seeing Lan and his bonds on screen. Also, Denney teased, “we’re going to see more of his romantic side” in subsequent episodes and seasons. 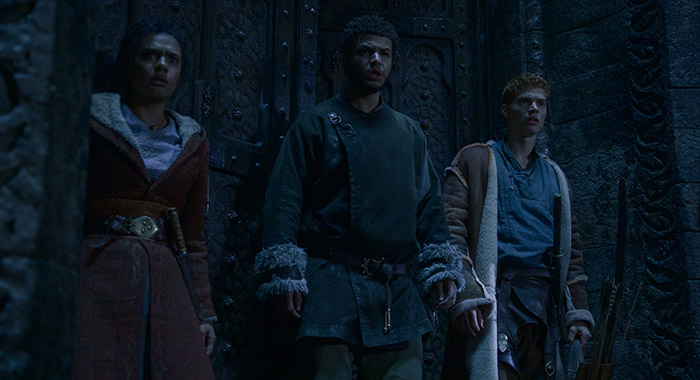 Of course, Moraine and Lan represent just two of the many characters viewers new to Jordan’s world will meet and, it is hoped, bond with. Pike said she’s already received mail from fans discussing just how important these characters can be.

As Pike also mentioned, the show will not shy away from magic, with some of those “staggering displays of power” happening early on. It is a sharp contrast from some earlier fantasy adaptations, which held back a lot of its magical content until viewers were hooked. Judkins said playing into that was a key aspect of adapting the novels.

“This is the world that these books exist in,” he explained, calling its universe’s magic system (known as “channeling” instead of magic) as one of its great world-building achievements; something viewers will get hints of in the first three episodes. “We’re going to try to stay as true to [the rules of channeling] as we can in the show so that we can, hopefully, continue to find those layers of depth.

“And I think it’s cool. So let’s make it cool,” he continued. “Seeing Rosamund chuck fireballs at Trollocs is something I can get behind. I think bringing that element of fun to the magic, but also the beauty and the danger of it, is something that’s really important in the show.” 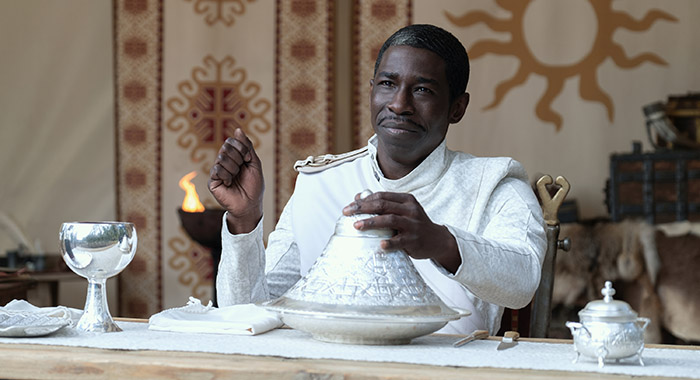 Another important aspect of the show: terminology and pronunciation. With things like Trollocs — the horned and hoofed army of the antagonist – and names like “Egwene” and “Nynaeve,” getting those sounds right are as important as striking the right tone. According to Judkins, a lot of the pronunciations come from Jordan himself via audio recordings.

“A lot of mine were wrong,” he admitted. The production also employed a researcher who “read the books 30 times and has access to all of the audio recordings.” In the end, a guide was produced, although Judkins mentioned some of the sounds will shift on screen depending on the particular accent of a character or actor. “So certain things will sit differently,” he explained. “But everything goes back to how [Jordan] thought it should be.”

Pike added that familiarity with a word also changes the way it gets said.

“If you have a partner or you have children or good friends, but if it’s a name that you say all the time, you say it differently than if it’s a name that’s unfamiliar to you. There’s just a way it comes out,” she explained. “So whenever there’s a character that I’m interacting with closely, I’ll always say that name over and over because it comes out in a different way when it’s very familiar. And the same with any word that is something that your character says a lot. It has to become second nature. It has to become natural.”

Denney added: “There’s still some — like ‘Shadar Logoth’ was one of those that we were still kind of fifty-fifty on.” 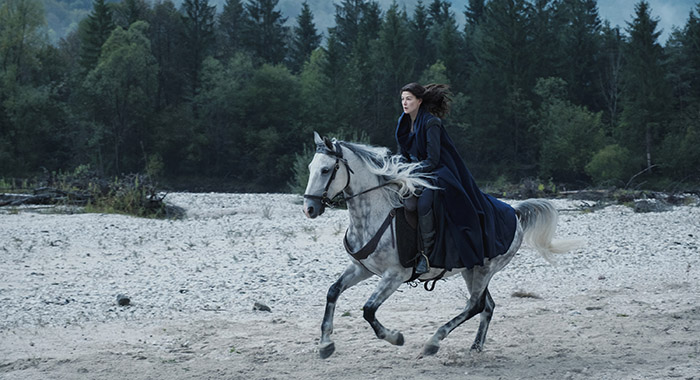 Another aspect Judkins wanted to lean into was the prevalence of songs and poems.

“You see songs a lot in the books, you see recitations of epic poems a lot in the books, it plays a really important role,” he explained.  “So we thought it was important to find a way that we could do it that felt grounded to the show and piece it into the show. I think that we succeeded in doing that. And then it is in that world, like music was a way that you told stories and a way that you talked about things that had happened in the past, or fables that we should be mindful of moving forward. So we try to use it in the same way.”

That respect for the world-building should create a new wave of fans for the series even as established devotees of The Wheel of Time discover a new emerging reality in the transition to television.

82% The Wheel of Time: Season 1 (2021) debuts its first three episodes this Friday on Amazon Video. 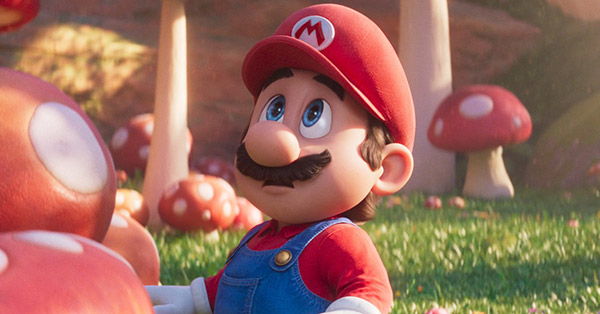