Box Office: The Martian Zooms Back To Number One

Goosebumps and Bridge of Spies round out the top three. 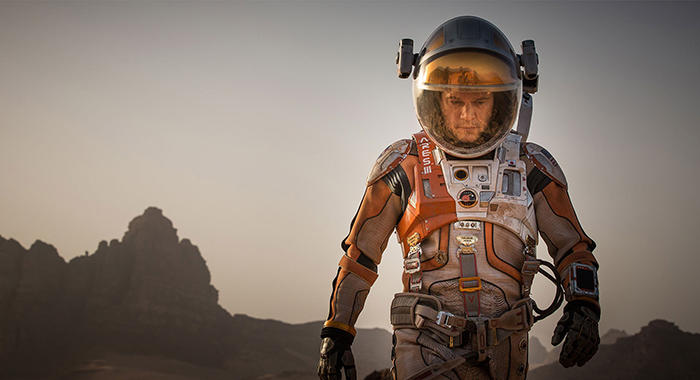 This weekend North American audiences were not impressed with the many new titles that Hollywood had to offer. Five films opened or expanded into nationwide release and all underperformed, a couple even had embarrassingly dismal numbers. Moviegoers stuck to well-liked holdover films which all carried good reviews and enjoyed solid holds. The top three films stayed the same as last weekend, though some shuffling occurred, and no film in wide release managed to reach a $5,000 average.

The Martian was in control once again as Matt Damon’s runaway hit eased just 25 percent in its fourth frame to gross an estimated $15.9M finishing in first place by a slim margin. Fox’s blockbuster has grossed a stellar $166.4M and is on its way to breaking $200M domestic joining Gravity to become the only October releases to ever surpass that mark.

Last week’s top draw Goosebumps fell to second place but still posted a good hold as Halloween approaches. The Sony adventure comedy took in an estimated $15.5M, down 34%, for a new cume of $43.7M. A final in the $80M neighborhood may occur for the $58M production.

Steven Spielberg and Tom Hanks enjoyed a terrific sophomore hold for their latest venture Bridge of Spies which eased only 26 percent to an estimated $11.4M holding steady in the bronze medal position. The Disney release has one more week before Spectre arrives distracting much of its target audience of mature adults. A final in the neighborhood of $70M may result which would still be the lowest ever for Spielberg among movies playing in 2,000+ theaters.

Despite having 96 million Facebook likes, Vin Diesel’s social media promotional machine did little to drive in actual sales for his latest film The Last Witch Hunter which opened in fourth with an estimated $10.8M from 3,082 theaters for a mild $3,512 average. The Lionsgate action-horror title targeted the actor’s large fan base but also showed that outside of the Fast & Furious franchise, his box office pull is questionable. The PG-13 film earned negative reviews and aimed for young men, a demo that doesn’t come out to the multiplex as much anymore, especially for films not associated with an exciting brand. International prospects will be much better.

Hotel Transylvania 2 matched its 2012 predecessor’s total gross this weekend with an estimated $9M in its fifth weekend. Off only 29%, the Adam Sandler-led toon has banked $148.3M – just like part 1 – and may have another $25M or so still to come for Sony.

A once-powerful fright franchise showed its age as Paranormal Activity: The Ghost Dimension, the sixth installment in the series, debuted in sixth place with an estimated $8.2M from a more limited 1,656 locations for a moderate $4,952 average. The first four Paranormal flicks all reached number one in October from 2009 to 2012 while the last pic The Marked Ones, more spinoff than sequel, bowed in second place in January 2014.

Paramount is planning a quicker VOD release than usual for the R-rated Ghost so some theater circuits opted not to play the scary film. Given the quick burn of the last few installments, this one (the first offered in 3D) may end its theatrical run with only about $15M which is about how much it cost to produce. The franchise has had limited activity over the past three years which is an eternity in the horror world and most fan interest in the U.S. has now evaporated. Overseas this weekend, Ghost opened to $18M from 33 markets including several number one debuts in Latin America.

Another new film underperforming was Steve Jobs which went nationwide after two strong weeks of limited play. The acclaimed Universal release grossed an estimated $7.3M from 2,493 sites for a weak $2,915 average. Great reviews and Oscar buzz only went so far with a nationwide audience. With low starpower, finite interest in the Apple guru, and competition for adults from many other choices it became a tough sell to mainstream moviegoers. Cume is $10M and finishing with $30M will be difficult.

Outside of the top ten, two new releases opening in over 2,000 theaters each crashed and burned generating some of the worst results of all-time for wide debuts. The Bill Murray pic Rock The Kasbah bowed to an estimated $1.5M from 2,012 locations for a pathetic $750 average for Open Road. Meanwhile, Universal’s Jem and the Holograms did worse with an estimated $1.3M from 2,413 sites for a disastrous $547 average. Critics and paying audiences gave thumbs in a downward direction to each one.

Among awards hopefuls, Room expanded from four to 23 locations and grossed an estimated $254,000 for a solid $11,043 average for A24. Focus opened its women’s rights drama Suffragette in four houses and took in an estimated $77,000 for a decent $19,250 average from platform play. It expands to 26 theaters next weekend in a roll-out similar to Room‘s.

The top ten films grossed an estimated $90.4M which was down 7 percent from last year when Ouija opened at number one with $19.9M; and off 3 percent from 2013 when Jackass Presents: Bad Grandpa debuted in the top spot with $32.1M.