Lon Chaney's creepy "Man In the Beaver Hat" from London After Midnight was truly terrifying, according to reviews of the long-lost film at the time of its release. 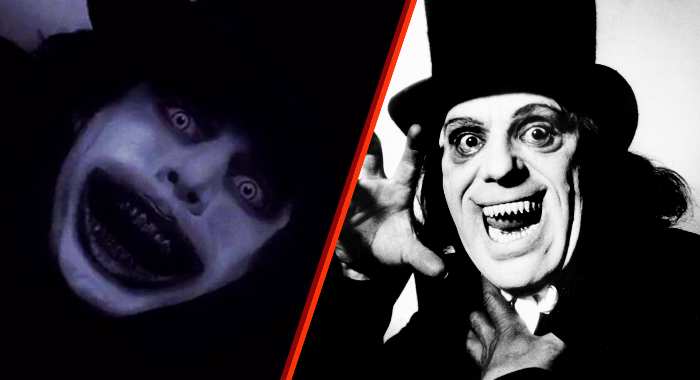 Mr. Babadook – the tall and top-hatted monster from Jennifer Kent’s acclaimed film The Babadook – might be the most iconic horror villain of recent times. (Don’t believe us? Check out the memes… or just leave your house on Halloween evening.) But while the Babadook is a marvel of modern horror, its roots date back to the earliest days of cinema, and to one film in particular: the Lon Chaney-starring London After Midnight. Here, as part of our RT Archives project, we take a look at that film and how its distinctive visuals inspired one of recent horror’s most celebrated works.

To read reviews of director Tod Browning’s 1927 London After Midnight, a murder mystery flavored with ghouls and hypnosis, is to know that it is terrifying. The Film Daily wrote that “Lon Chaney’s latest chill raiser [has] a story certain to disturb the nervous system of the more sensitive picture patrons.” But modern audiences will never know just how nerve-wracking the film is. Although it has been reconstructed by Rick Schmidlin with the help of recovered still photographs, a script, and new score by Robert Israel – you can find details of that effort at TCM – audiences can no longer see London After Midnight in its original form: the only known remaining copy was destroyed in an MGM vault fire in the 1960s. 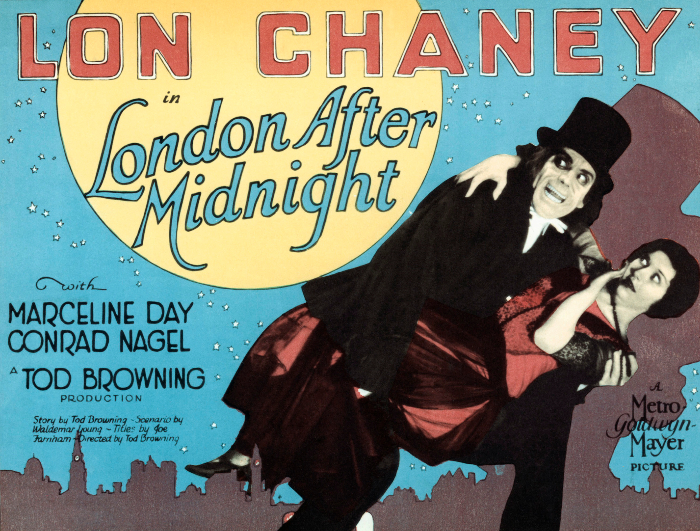 Trawl through contemporary reviews, though, and you see that a major contributor to the film’s overall creepiness was a mysterious character who – spoiler alert! – is later revealed to be Scotland Yard Inspector Professor Edward C. Burke in disguise. Of the limited imagery from the film that remains, it’s this figure, with his bulging eyes, pointed teeth, and distorted grin, that stands out. The Sydney Morning Herald’s April 30, 1928 review addressed the effect of the creature at the time: “The few moments when a squat black figure like a bat, with glaring eyes and enormous teeth, is seen coming down the stairs in company with a woman in grey robes, whose face is terrifying in its corpse-like absence of expression, imprint themselves very strongly on the mind.”

The role was fittingly played by famed character actor Chaney, known as “the man of a thousand faces” due to his ability to apply his own makeup and prosthetics, and distort his body for the many roles that required it. He utilized those skills to deliver memorable performances in The Phantom of the Opera and The Hunchback of Notre Dame, among others. But it was the wide-eyed, grinning Professor Burke that might have been his most singularly disturbing; at the very least, according to a 1928 Photoplay review, the costuming and makeup used “was as gruesome as any [Chaney] had ever worn.” In December of 1927, The Brooklyn Daily Eagle wrote, “Mr. Chaney obligingly applies a figurative bit of ice to the vertebrae by walking in and out of scenes in properly horrifying makeup.” 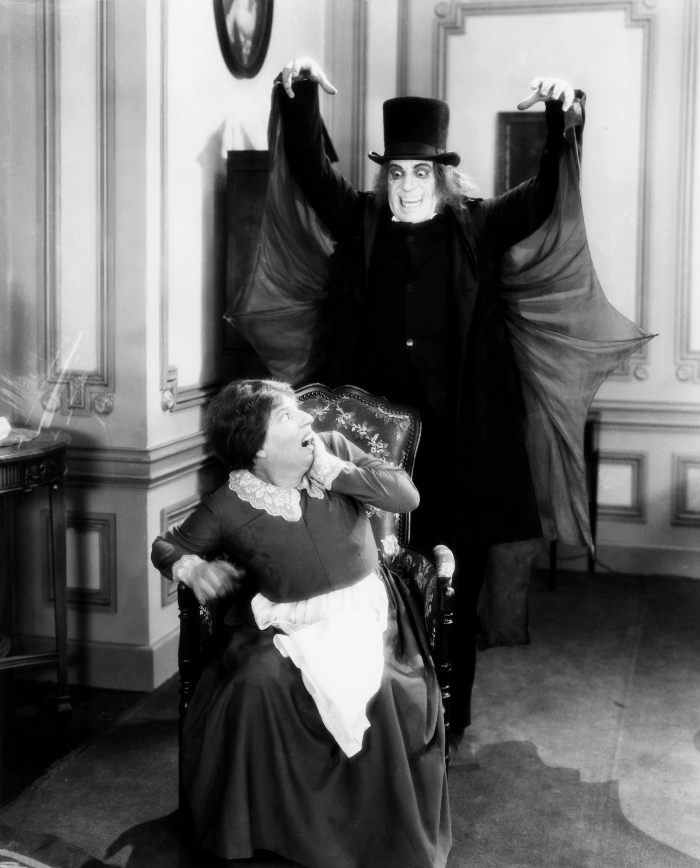 Keen-eyed movie fans immediately saw similarities between “The Man In the Beaver Hat,” as Chaney’s London After Midnight figure came to be known, and Mr. Babadook, the creature from a mysterious pop-up book who enters the home – and/or minds – of a grieving mother and her young son in Kent’s The Babadook. There’s the hat, the black-rimmed eyes, and the exaggerated mouth and teeth. In 2014, Kent told the Mountain Express that the image of Chaney in the 1927 movie “really impressed itself upon me.”

She added in the same interview: “What I loved about that particular image – and you can also see it in the footage we used of [Chaney] in the movie on TV from Phantom of the Opera – is that you can see that it’s a person’s face. It’s just a face that’s been distorted – without CGI obviously – but manipulated so that it looks human, but almost not. And I think that London After Midnight, shot with his face and his mouth pulled apart like that, is really frightening.”

There is a thematic similarity, too, between how both creatures are handled in Browning and Kent’s films. In The Babadook, the creature is more than a terrifying specter who must be vanquished for Essie Davis’s Amelia to move on – he becomes something that the protagonist must learn to make space for in her life. In London After Midnight, Chaney’s mysterious figure is misunderstood as well: He’s ultimately not a villain, and becomes a key part of solving the film’s mystery. 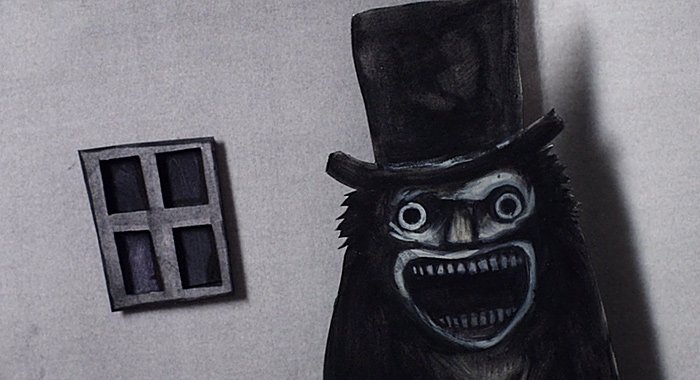 That turn resonates with something Chaney told journalist Ruth Waterbury in the same issue of Photoplay in which London was so well reviewed – and his performance deemed “perfect.” “I’ve tried to show that the lowliest people frequently have the highest ideals,” Chaney said. “In the lower depths when life hasn’t been too pleasant for me I’ve always [had] that gentleness of feeling, that compassion of an under dog for a fellow sufferer.”

London After isn’t Chaney’s only lost film.  Many of the short silent films from his early career are considered lost, like  The Chimney’s Secret, An Elephant On His Hands, Father and the Boys, Almost an Actress, as well as later film The Big City, another collaboration with director Tod Browning from 1928. You can our guide to cinema’s lost films and read reviews of those films here. 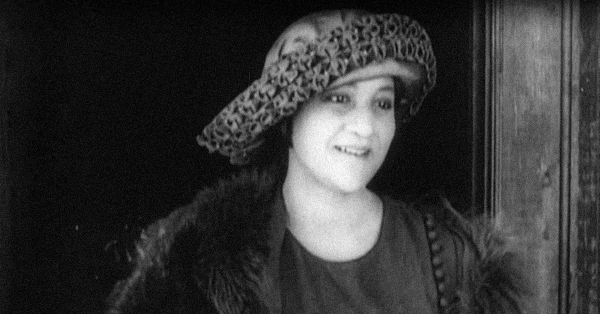 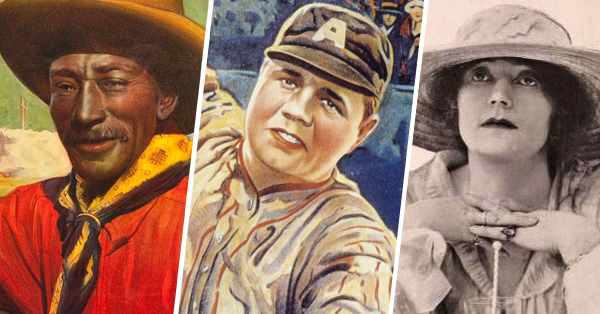 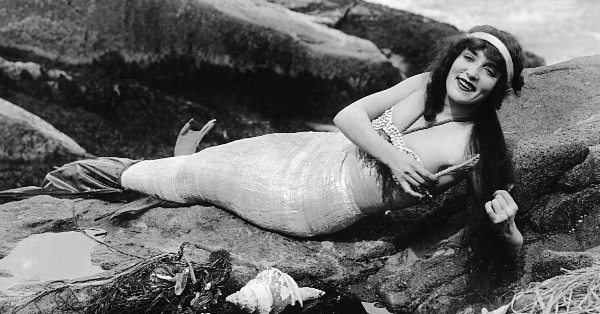