From official trailers for Jordan Peele's Nope and Amazon's LotR: The Rings of Power to new looks at Doctor Strange, Moon Knight, and more. 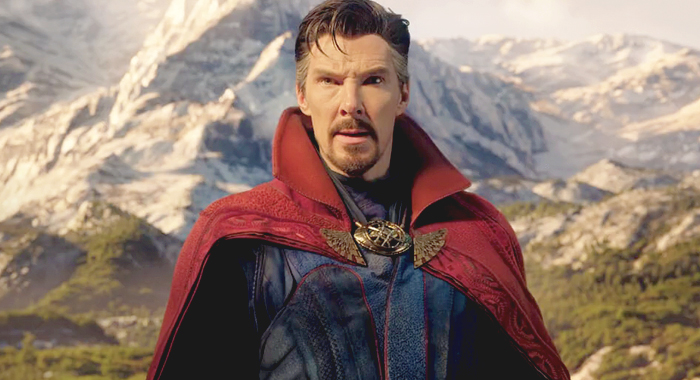 The “Super Bowl Commercial” has become such a phenomenon that companies have begun “airing” their ads online far in advance of the big game. Of course, the major Hollywood studios have followed suit with big trailer drops, so we got to see new previews of some of the most anticipated films — think Jordan Peele’s Nope and the MCU’s Doctor Strange in the Multiverse of Madness — before kickoff. We also got exciting new glimpses of Amazon’s upcoming Lord of the Rings series The Rings of Power and Disney+’s Moon Knight, as well as Super Bowl spots for films like Sonic the Hedgehog 2, Uncharted, and The Lost City. Check out all the fresh trailers, TV spots, and special looks below.

Though it probably wouldn’t technically be considered a “Super Bowl ad,” WB/DC did release a minute-long sizzle reel on Friday that offered glimpses of several of their upcoming projects, beginning with Matt Reeves’ The Batman, which opens on March 4. The most exciting reveals came in quick shots of the Justice Society of America, the superhero team that will be introduced in Black Adam (July 29). While Dwayne Johnson plays the titular character in the film, he will also be joined by Hawkman (Aldis Hodge), Cyclone (Quintessa Swindell), Doctor Fate (Pierce Brosnan), and Atom Smasher (Noah Centineo), all of whom show up here. We also heard the voice of Michael Keaton’s Bruce Wayne in The Flash and saw glimpses of Aquaman and the Lost Kingdom.

In another “Super Bowl ad” that actually dropped days before today, Paramount’s The Lost City dropped a quick-hit 30-second TV spot that was, like a couple others on this list, simply a pared-down version of the longer trailer they released a month ago. In other words, there’s no new footage to be seen, but it offers just enough for casual Super Bowl viewers to get an idea of the film’s story and tone.

Hours before the Super Bowl even took place, Universal sneakily premiered the first trailer for Jordan Peele’s highly anticipated third feature Nope at midnight on Saturday night. While it’s still unclear what exactly is going on, the trailer reveals just enough to let us know that various residents of a rural town in what appears to be the Southwest become witness to some sort of a supernatural event. There are signs of ominous weather, electronic failures, and spooked animals, so it could be an otherworldly presence. As usual with Peele’s films, we’ll just have to see it to find out. Partway through the second quarter, we also got a shorter Super Bowl spot with slightly different footage, focusing more on something ominous in the sky.

“CHOOSE YOUR TEAM,” as the latest TV Spot for Sonic the Hedgehog 2 instructed. We already got a “Big Game Spot” for the film on Friday, but Paramount went ahead and dropped another quick hit showing mostly the same footage but offering a few new action shots of Sonic (voiced by Ben Schwartz) and Tails (Colleen O’Shaughnessey) going head-to-head with Knuckles (Idris Elba).

Sony’s Uncharted releases this coming Friday, but to rally some last-minute support behind their video game adaptation, they dropped a brief TV spot ahead of the Super Bowl in which stars Tom Holland and Mark Wahlberg compare Boston sports fans to fans of Tottenham, Holland’s favorite football club (aka soccer team) back home. The short clip then ends with a few scenes from the upcoming film, including the cargo plane set piece that has been all over their marketing.

Doctor Strange in the Multiverse of Madness (2022)

Shortly before kickoff, Marvel unleashed the latest trailer for Doctor Strange in the Multiverse of Madness, and boy, was it wild. For those who want to go into the film completely cold, we won’t spoil anything here, but suffice it to say that things will get out of hand quickly for the good doctor, and he will need help from old friends and new to survive. The film of course has major implications for the Marvel Cinematic Universe going forward, after the establishment of the Multiverse in previous titles like What If…? and Spider-Man: No Way Home, the latter of which is a direct lead-in to this movie.

Following up on its Doctor Strange trailer shortly after it aired, Marvel also dropped a new look at its upcoming Disney+ series Moon Knight. It was a quick 30-second hit, but we got to see more of Oscar Isaac as Marc Spector, who admits he “can’t tell the difference between my waking life and dreams,” and Ethan Hawke as cult leader Arthur Harrow, who encourages Marc to “embrace” the “chaos” within himself. The spot ends with a few action shots that should inspire even more excitement for Marvel fans.

Universal offered up a new trailer for their upcoming trilogy-capper, Jurassic World Dominion, thought it was essentially just a shortened version of the trailer the studio released a few days ago. We see how dinosaurs have integrated into the wild, we see the reunion of Laura Dern’s Ellie Sattler and Sam Neill’s Alan Grant, and we see the original Jurassic Park trio together with the new Jurassic World gang. Nothing new here, so it seems catered to those who probably missed the original trailer drop.

Universal also released a tense 30-second teaser for the upcoming Michael Bay actioner Ambulance, which stars Jake Gyllenhaal and Yahya Abdul-Mateen II as a pair of adoptive brothers who attempt a bank robbery, botch it, and end up fleeing the authorities in an ambulance carrying the LAPD officer they shot. The clip is mostly footage we’ve seen before, in the longer trailer, with the words “Los Angeles” on screen dissolving until only the L and the A remain and merge into the film’s title.

The Lord of the Rings: The Rings of Power

Brace yourselves, because the Lord of the Rings saga is about to get a new chapter, and we just got our first look at it. First, if you’re curious what the series will be about, you can read for yourself here. The trailer offers us quick looks at several characters and settings of Middle-earth during the Second Age, before the Fellowship ever came together, and a few moments of action, promising a series that looks to carry on the legacy of the popular film series.