We've got tons to look forward to, from The Batman and Thor: Love and Thunder to Scream, Jurassic World Dominion, and Hocus Pocus 2. 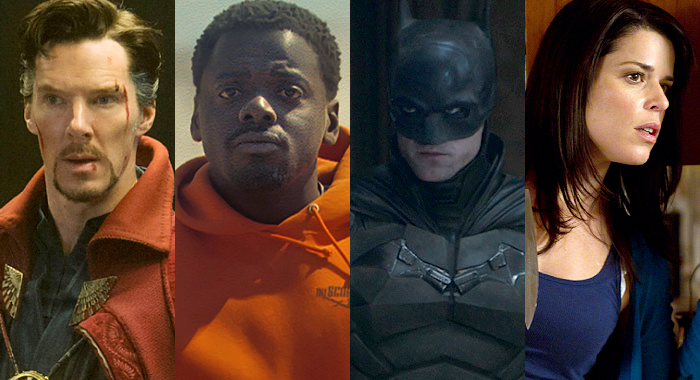 While the coronavirus pandemic continues to have a massive impact on the movie industry, Hollywood continues to press on in 2022. With that in mind, we look ahead to the films we expect to see gracing cineplex marquees in the coming year. And boy, do we have some great titles lined up, with superhero fare like The Batman, Thor: Love and Thunder, and Spider-Man: Across the Spider-Verse (Part One); action and adventure with Uncharted and The Lost City; rousing family films like Sonic the Hedgehog 2 and The Bob’s Burgers Movie; and even some horror, with Scream and Halloween Ends. As more dates are confirmed and trailers are released for all of these 2022 movies, we’ll continue to update this page, so check back often! [Updated 8/24/22]

We last saw the minions wreaking havoc in 1960s England before they met up with a young Gru. Perhaps their next adventure will be their first with him. Whatever shenanigans the yellow ones, voiced by Pierre Coffin, get up to, expect them to be at it again for Minions 3 and Minions 4 and so on: the first Minions movie made more than $1.5 billion globally and helped the Despicable Me franchise become the highest grossing animated franchise of all time.

Marvel’s second film of 2022 is the highly anticipated follow-up to Taika Waititi’s Thor: Ragnarok, which reinvented the character to the delight of critics and audiences alike. Natalie Portman’s Jane Foster will return to the franchise, and it’s been teased that she will wield Thor’s hammer, Mjolnir, at some point. We also know that Tessa Thompson’s Valkyrie will be back, and Thor will meet up with the Guardians of the Galaxy to face Christian Bale’s Gorr the God Butcher. So, you know, good times all around.

After the runaway success of Get Out and Us, Jordan Peele got real busy real fast, but he’s finally getting around to making his third feature. As to be expected, we don’t know much about the film, though its first trailer reveals that it will be set somewhere in the American Southwest and center on a small town whose residents experience a supernatural event in the skies above.

Based on the 2009 novel of the same name, this action thriller stars Ryan Gosling as a CIA mercenary who is forced on the run when he discovers some unsavory things about his agency and a rival agent (played by Chris Evans) is sent after him. Directors Joe and Anthony Russo (Avengers: Infinity War and Endgame) are at the helm, and the impressive supporting cast includes Ana de Armas, Billy Bob Thornton, and Jessica Henwick, among .

This animated film boasts an all-star cast who lend their voices not just to iconic DC Comics characters like Batman (Keanu Reeves), Superman (John Krasinski), and Wonder Woman (Jameela Jamil), but also… their pets, who must rally to save the day when their superpowered owners are kidnapped.

This horror/dark comedy from A24 centers on a group of young friends who gather for a party and play a murder mystery game called “Bodies Bodies Bodies,” only to discover that one of them has been killed, and they must now discover who the real murderer is.

This cheeky, stylish action thriller based on a novel by Japanese writer Kōtarō Isaka follows an assassin (Brad Pitt) trying to give up his life of killing who is tasked with retrieving a mysterious briefcase on, yes, a bullet train full of other assassins looking to do the same. The film is directed by David Leitch (Atomic Blonde, Deadpool 2) and features an all-star cast.

It’s been seven years since George Miller released Mad Max: Fury Road, but he’s finally back with… a romantic fantasy. The story centers around a scholar in Instanbul who encounters a djinn who offers her three wishes in exchange for his freedom, with unexpected consequences.

The first of two high-profile Pinocchio movies debuting in 2022 (the other being Guillermo del Toro’s stop-motion animated film, premiering on Netflix in December) is Disney’s “live-action” remake of their classic animated adaptation of the story of a wooden boy who comes to life and seeks a way to become a real boy. Tom Hanks takes on the role of Geppetto and Cynthia Erivo plays the Blue Fairy in this Disney+ exclusive.

Ti West and A24 released one of 2022’s most critically acclaimed horror films, X, back in March, but it was shot back-to-back with a prequel origin story for one of that film’s characters, namely Pearl. We’ll just leave it at that to avoid spoilers, but feel free to check out the trailer for more context.

Viola Davis headlines this historical drama about the Dahomey Agojie, the only all-female military ever documented. Davis stars as General Nanisca, who takes on a new recruit played by Thuso Mbedu as they struggle to keep their people safe from malevolent outside forces.

Based on the Joyce Carol Oates novel of the same name, this biographical drama directed by Andrew Dominik (The Assassination of Jesse James) offers a fictionalized look at the private life of Marilyn Monroe during the 1950s and 1960s, with Ana de Armas (Blade Runner 2049) taking the lead as the iconic model, singer, and actress.

Bette Midler, Sarah Jessica Parker, and Kathy Najimy reprise their roles as the sinister Sanderson sisters in this sequel to the 1993 Halloween cult favorite. This time around, three young women accidentally bring the witches to modern-day Salem and must figure out how to stop them. The film is being produced exclusively for Disney+.

David O. Rusell’s latest is a ridiculously star-studded affair that takes place in the 1930s and centers on a trio of old friends — Christian Bale, Margot Robbie, and John David Washington — who become prime suspects in a murder case and must work together to discover the truth.

Director David Gordon Green and writers Danny McBride and Scott Teems successfully sequel-booted (is that a word now? reboot-queled, maybe?) the Halloween franchise with 2018’s Halloween, and based on its reception, they decided to go ahead and give us all a full trilogy. That trilogy ends with the appropriately titled Halloween Ends, in which Jamie Lee Curtis’ Laurie Strode will presumably defeat Michael Myers forever.

In what amounts to an In Bruges reunion, writer-director Martin McDonagh has enlisted Colin Farrell and Brendan Gleeson to star in his dark comedy about the conflicts that arise between two friends when one of them suddenly decides to end the friendship.

Dwayne Johnson stars as the all-powerful antihero (and traditionally a nemesis to Zachary Levi‘s Shazam), who is freed from his prison of 5,000 years and, after encountering the Society of America, must decide whether to play nice or be a jerk.

In the vein of something like Kenneth Branagh’s Belfast or even Steven Spielberg’s upcoming The Fabelmans, James Gray takes inspiration from his own childhood growing up in Queens, New York in the 1980s to fashion this period coming-of-age drama.

Releasing smack-dab in the middle of the pandemic, 2020’s Enola Holmes was a surprise hit with critics, and audiences loved it so much that Netflix decided to give it another go. Star Millie Bobby Brown returns in the title role, as Enola takes on her first official case as a detective and stumbles into a conspiracy so big that she turns to big brother Sherlock (Henry Cavill) for help.

We finally got our first look at Wakanda Forever at Comic-Con in 2022, revealing that the film will focus on the titular kingdom attempting to move past the death of its beloved leader (the late Chadwick Boseman’s King T’Challa) and fend off a threat in the form of Namor (Tenoch Huerta), the ruler of an ancient underwater civilization. We also got a few other significant teases in the trailer, but we won’t spoil those here.

This ghoulish dark comedy stars Anya Taylor-Joy and Nicholas Hoult as a married couple who travel to an exclusive island restaurant where a famous chef (Ralph Fiennes) prepares a special menu for his guests. The evening becomes progressively treacherous for everyone as secrets are revealed and violence erupts.

Based on a 2017 non-fiction book, this historical war drama focuses on Jesse Brown, the first Black pilot in the US Navy, and his wingman Tom Hudner, who became two of the Navy’s most celebrated pilots for their heroics during the Korean War.

Steven Spielberg’s latest is a semi-autobiographical — but still fictional — coming-of-age story that charts the adolescent life of a young boy living in post-war Arizona who aspires to become a filmmaker and, after discovering a family secret, learns to cope via his love for the medium.

Just a few months before the COVID-19 pandemic went full-blown around the world, Rian Johnson delivered a crackerjack whodunit in Knives Out and introduced the world to Daniel Craig’s eccentric detective Benoit Blanc. Following in the footsteps of other murder mystery series, Knives Out 2 will see Benoit Blanc investigating an entirely new case with new suspects, this time in Greece.

The classic children’s tale gets a fresh take, thanks to Guillermo del Toro, who has wanted to make this film for quite some time. The musical film will be del Toro’s first stop-motion animated feature, and it will be somewhat darker than Disney’s version of the story, as evidenced by the melancholy first trailer.

Darren Aronofsky’s latest boundary-pushing film is being hailed as a triumphant return for Brendan Fraser, who stars as a severely overweight recluse who seeks redemption from his estranged teenage daughter. Though there has been some controversy regarding the content and themes of the film, virtually everyone so far is singing the praises of Fraser’s performance.

It’s taken almost a decade and a half, but we’re finally getting the long-ago-promised follow-up to James Cameron’s box office ruler, Avatar. Sam Worthington’s Jake Sully and Zoe Saldana’s Neytiri now have a family on Pandora, but when old enemies return, they’re forced to evacuate and find a new home. Kate Winslet, Michelle Yeoh, and Edie Falco are among the new additions to the cast.

Whitney Houston: I Wanna Dance with Somebody (2022)

Naomie Ackie stars as the late Whitney Houston in this biographical drama about the iconic pop star’s life, charting her rise to fame. The film was written by Anthony McCarten, who also wrote Bohemian Rhapsody, which should offer some idea what kind of film it will be.

Antonio Banderas is back as the swashbuckling kitty who, having lived out eight of his nine , reluctantly resigns himself to a domesticated life until Goldilocks and the Three Bears come looking for him, forcing him to take up the sword again.

Speaking of whodunits, Scott Cooper’s (Crazy Heart, Antlers) next film centers on a series of murders at West Point in 1830, where a certain man named Edgar Allan Poe was a young cadet. The fictional story is based on a 2006 novel of the same name and reunites Cooper with his Hostiles star Christian Bale.

Writer-director Damien Chazelle (La La Land) drops a Christmas Day treat for fans of old Hollywood, as his latest centers on the era when the industry transitioned from silent films to talkies. The impressive all-star cast includes people like Brad Pitt, Margot Robbie, Olivia Wilde, Jean Smart, and more playing a variety of both real and fictional characters from Hollywood’s past.