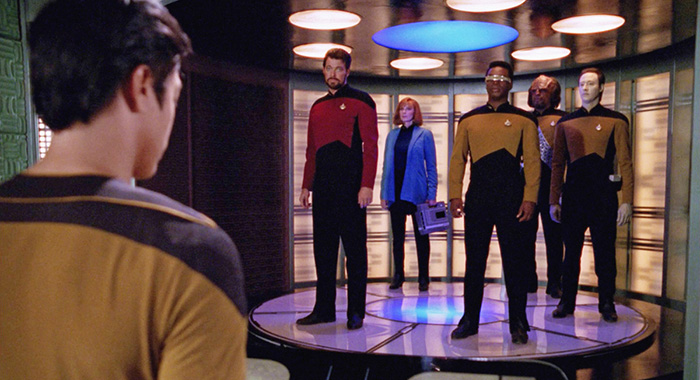 Frakes, fondly known to Trek devotees as Commander William T. Riker of Star Trek: The Next Generation, most recently took the helm of Star Trek: Discovery, directing the first season’s 10th episode, “Despite Yourself,” which debuts Sunday.

While Next Gen both goosed his acting career and gave him his directing start, Frakes went on to direct other TV series, including Trek shows Deep Space Nine and Voyager, as well as Roswell, The Librarians, The Orville, and so many more. He also tackled Trek movies Insurrection and the film franchise entry with the second highest Tomatometer, First Contact, which is Certified Fresh with a 93% score.

We spoke to Frakes about a heartbreaking character death in Sunday’s episode, Quentin Tarantino’s Star Trek movie and the future of Trek cussing, Next Gen cast high jinks, and what it was like to command this new starship adventure. 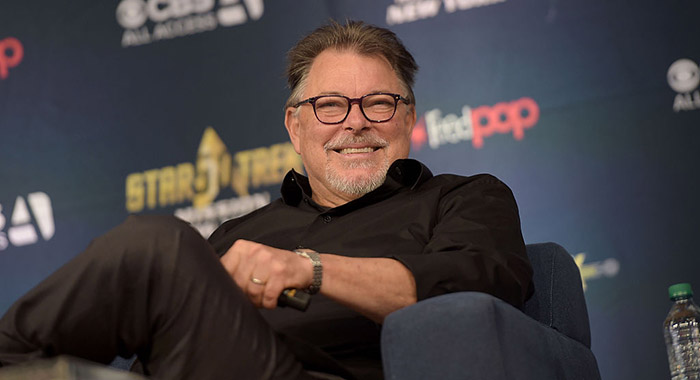 Debbie Day for Rotten Tomatoes: Let’s talk about your episode of Discovery.
Jonathan Frakes: Have you seen it?

RT: I have seen it, and it was very good. I gasped when [spoiler]. I was sitting alone watching it, and I just went, “Aaaah!” I wondered if my neighbor heard me, because it scared the hell out of me.

Frakes: It was a great death. But is it a death?

RT: I think any time the words “temporal anomaly” come into a Star Trek episode, all bets are off.

RT: Correction: quantum anomaly. I think there’s potential for a lot of things to happen.

Frakes: There are equally dramatic moments in this episode. 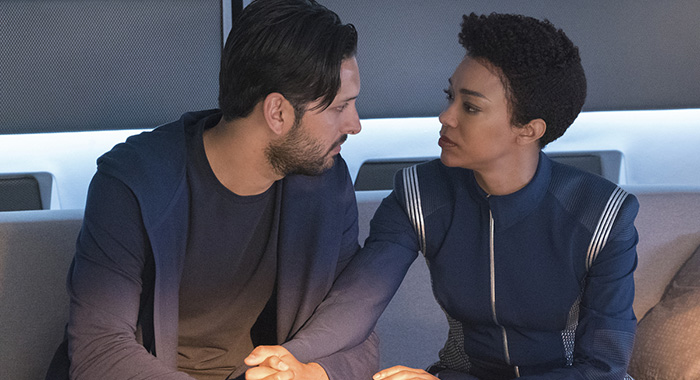 RT: Well, I was going to get to that, because I think what we’re seeing too is an escalation between Michael and Ash’s relationship. Is that correct?

Frakes: I would say that’s a very accurate description. [But] is that really the man she wants to be with?

RT: Yeah, no, not so much — which is disappointing because I like them together. They’re an attractive couple.

Frakes: They’re a great-looking couple. Also, I am so crazy about her: both Michael and Sonequa [Martin-Green].

RT: Yeah? Do tell me about that.

Frakes: She, as the new face of our franchise, of our family if you will, could not have been better chosen. I wished I had Michelle [Yeoh] on my episode too, which I didn’t, but I did get to meet her while I was working there. These women — and Jason [Isaacs], I’ve got to say — are fabulous. It feels so much like being around our [Next Generation] cast in such a positive way. It brought back such great memories. This company is a team, and they love each other and they support each other. They watch each other’s scenes. They go out to dinner together, they hang out together. It’s so familiar to me, from the way we were on Next Gen. It warms my heart.

RT: That’s great. I was actually going to ask you about that, because when you directed Next Generation episodes, you had, I would assume, a certain shorthand between and you the cast because you acted with them as well.

Frakes: They also were fearless about taking the s— out of you too. I mean, they were shameless in the way they treated you. 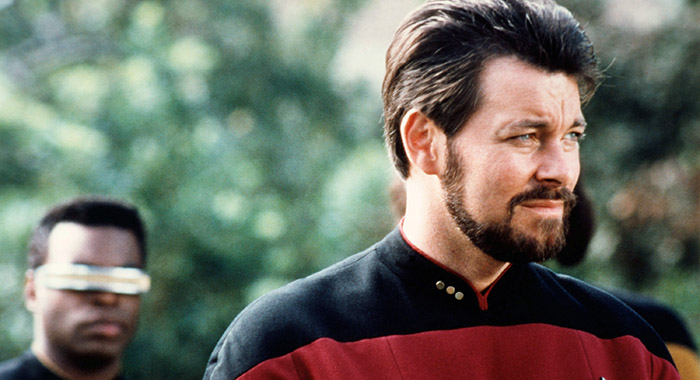 Frakes: As a member of the family. Well, this particular director. We were pretty tough on directors anyway, because we were wild. We were wild, especially on the bridge, and these guys have that same — there’s a great playfulness that comes from being prepared to do the work, so nobody’s doing their homework while they’re there. They’ve done their homework, so they come to play, knowing the notes, if you know what I mean. It really leads to a fabulously creative and playful atmosphere.

We had a good time. Marina [Sirtis] and I, we’d still be doing a show if they’d have us.

RT: Did you think about your character as being in the future for these characters?

Frakes: Yeah, I tried to wrap my ahead around that concept, but the production design and the cinematography and wardrobe — costumes, I mean, are so spectacular on this show. I don’t know. There was a negative reaction from some to the Klingons. I think the Klingons are fabulous on Discovery. 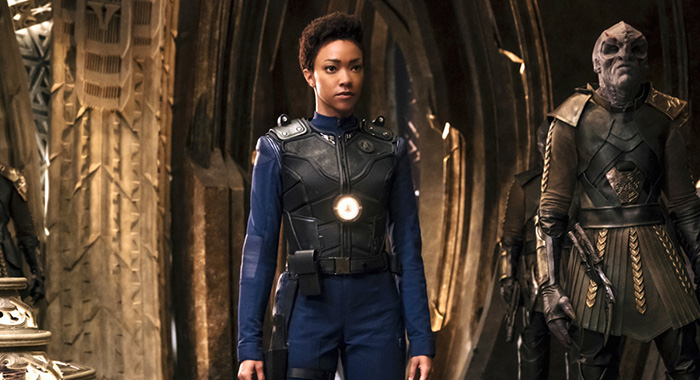 RT: Going from directing Star Trek in the ‘90s to directing Discovery now, could you talk a little bit about how the toys have changed or the tools have changed — toys and tools?

Frakes: Both the toys and the tools, and the show that we’re trying to make. I mean, one of the great advantages of doing Discovery is that it’s a — in terms of time and money — it’s much more of a Game of Thrones than it is a basic cable show, so you have time. The scope of the script is huge. The production design, the sets are spectacular. You’re given time to prepare. You prepare with the cinematographer. I had this wonderful guy named Colin Hoult who was my DP.

You can plan your transitions. We storyboarded that fabulous fight in the turbolift, and you can previsualize with the effects house. It’s really like making a movie. I mean, that’s such a cliché to say, but you’re encouraged to be cinematic. You know, for lack of a better way to describe it, it’s sort of J.J. [Abrams]’ world, in the cinematic bent that he took the franchise in.

RT: The fans benefit, obviously, because of how technology has changed in these many years.

RT: How did you come to direct this episode?

Frakes: It was a gift. Well, you know. You’ve interviewed enough people. You know that when you direct episodic TV, you don’t get to choose your episode unless it’s written for you or unless it’s a real obvious — I did a Castle that Nathan [Fillion] was working at a Star Trek convention in, and it was quite clear to the writers as I was working on the show that this would be a great show, “That one’s written, so let’s put that on the schedule, and Frakes is directing, so that all makes sense.” Then when you’re producing a show, like I do The Librarians, certain episodes — I work very well with Noah, so I like to direct the ones that he’s written.

When you’re coming in as a new director as I was on this show — and I was dying to get on the show — I was blessed that episode 10 happened to be after the first half of the season, it happened to be the cliffhanger to all these wonderful stories that had been set up as the show wound itself through the first nine episodes. The train was on the tracks and running really smoothly when I got there, so I benefited by being there at that time and being there with Sean Cochran’s script, which was great, and having the support of [Discovery showrunners] Gretchen [Berg] and Aaron [Harberts], who I’d worked with on Roswell, and Ted Sullivan, who was down there as well as a producer on the show, and he was a big Trek fan.

There was a lot of positive energy gathered around this episode and people. I mean, without getting too full of myself, they were very curious about what my experience was like as a member of another crew or another family or another Star Trek, so it was fun to share that and it was fun to be part of the new one. 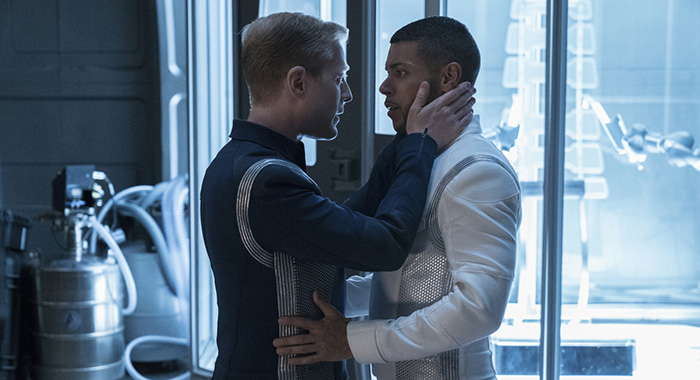 RT: Can you share some of the questions that they asked you and your responses?

My life was changed radically the day I got that job, and so was everyone’s in the cast and so will everyone be in Discovery. I mean, Sonequa was already a star, Jason’s already a star, Michelle was already a star, but most of these other actors are new, young actors who are just starting to build their resume like we were. The only people that anybody knew on our show were Levar Burton, obviously from Roots, and Will Wheaton, ironically, from Stand By Me. Those were the only stars on our show when we started. 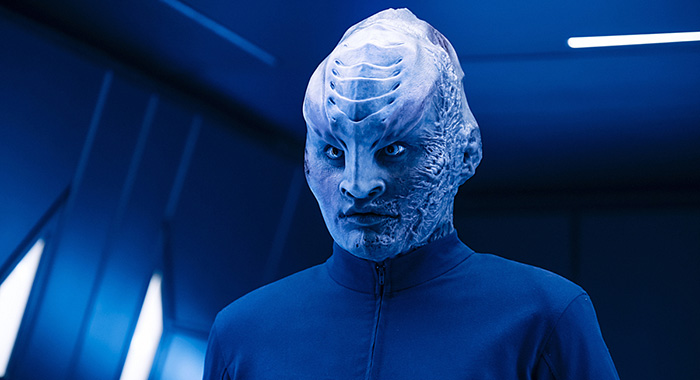 RT: Discovery has Mary Wiseman, who has been such a hit with —

RT: What other TV shows appeal to you these days?

Frakes: I was a huge Fargo fan. This season was not as exciting as last. I just watched three Black Mirrors last night. I’m crazy about this show that shoots in Yorkshire called Happy Valley. I think it’s brilliant. What else do I — oh, I watch a show called Sheffield, which is shot in Scotland, which I also love, which is a murder show. I follow Ray Donovan and I follow Homeland. I somehow have started and restarted Game of Thrones and still haven’t found the time to go back to the beginning. I should go and watch the entire epic. I watched Breaking Bad all the way through a couple of years ago. 24 I watched all the way through a couple of years ago, after the shows had aired. I think Fargo, the first two seasons of Fargo, were the best things going for a long time. 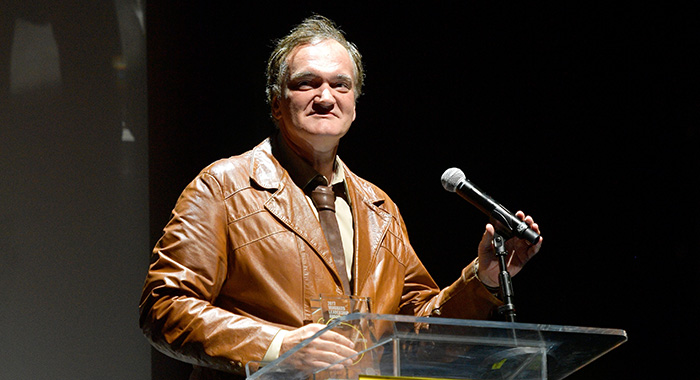 Frakes: Where do you fall on the Quentin Tarantino story?

RT: I’m open to have people experiment and to see what they can do with a thing. What about you? Let me throw that right back at you.

Frakes: I texted with J.J. about it to see what his take was. I wanted to see if I could get the scoop out of him, and he just said it’s going to be wild. I threw it back at him. I’m fascinated. I love the fact that Patrick Stewart played his hand so well and said, “Yeah, I’m available. Count me in.”

RT: When you look at films like Logan and Deadpool, harder is not necessarily bad, you know? We saw some pushback with Discovery dropping the f-bomb, which was a big moment for me as a longtime viewer. I think people who maybe grew up with Star Trek as part of their childhood and have always seen it as a family-oriented property —

Frakes: Yeah, and are sharing it with their family now.

RT: Yeah, and I think it may have taken some of them by surprise to see that kind of profanity.

Frakes: One can only expect more if Quentin’s in charge.

RT: Right. Exactly, but you know, there are films and shows that are made for adults; there are things that kids shouldn’t watch. That’s just how it is. I think there’s unexplored territory in the brand, and I’m fine with seeing it explored.