From Pete Davidson and Awkwafina to Emma Thompson's Prada-level turn in Late Night, these performances are going to be talked about all year.

by Jacqueline Coley | February 4, 2019 | Comments
Another Sundance Film Festival is done and dusted and it’s been unlike any other previous year. With several high dollar acquisitions – Amazon alone spent nearly $50 million on new titles – much of what we saw in Utah will make its way to theaters this year. If you have been following along with our Sundance Scorecard, which shows Tomatometer scores for any Sundance title that got one after 5 reviews, you’ll notice critics were loving Shia LaBeouf’s Honey Boy, Jennifer Kent’s Babadook follow-up The Nightingale, Lulu Wang’s Awkwafina-led dramedy The Farewell, and Mindy Kaling’s Late Night. Only four of the 2018 Sundance films made it to the Oscars this year, but chances are we will be talking about at least one of the actors from the 2019 slate come awards time next year. And if the Academy doesn’t nominate one of our favorites? We might still be talking about it anyway (*cough* Toni Collette was robbed).

Park City is the place for established stars to break from their typecast molds and give us something completely new. Pete Davidson, Armie Hammer, Awkwafina, and Octavia Spencer shook things up at this year’s festival, while veterans like Emma Thompson reminded us of why we love them. These are our favorite performances from Sundance 2019. 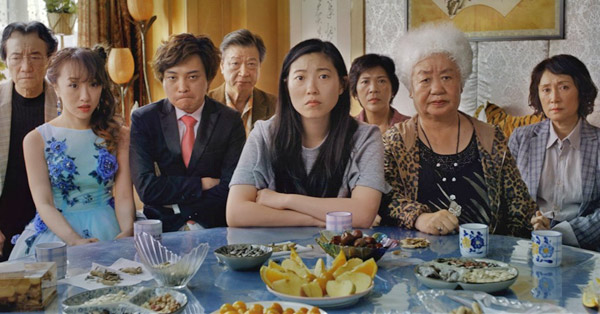 (Photo by Courtesy the Sundance Institute)

In The Farewell, Awkwafina takes her first dramatic turn and although the Crazy Rich Asians star feared she wouldn’t be able cry on cue, her muted performance repeatedly brought us to tears. The premise – a family organizes a fake wedding to gather everyone together following the grandmother’s terminal diagnosis (which she does not know about) – is tailor made for tearjerking dramedy, and Lulu Wang’s feature debut had critics laughing through their sobs. Awkwafina plays the ‘straight man,’ while the rest of the cast provides the laughs: Mizuhara as an trepidatious Japanese bride, Lin as a stern Chinese-American mother, and Zhou as the energetic grandmother oblivious to her family’s trickery. We enjoyed the men of The Farewell, too, but the women – especially Zhou – give the film its humor and heart. 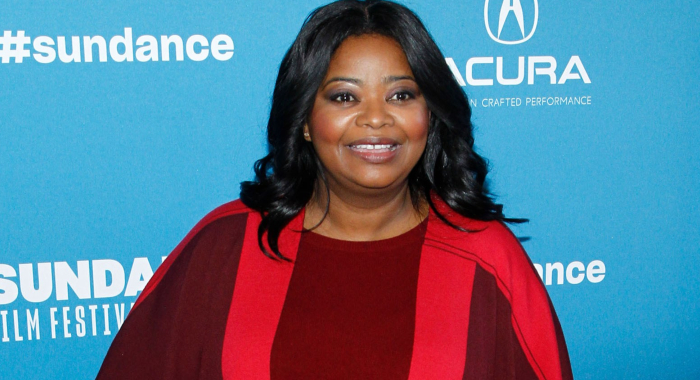 In Luce, a former African child soldier turned model U.S. student is cast in an entirely new light when he submits a disturbing essay for a school project and his teacher, played by Spencer, deputizes herself as the one to discover the truth – by any means necessary. Spencer manifests the weight of cultural expectations in the role of her career. The taut physiological drama, adapted from J.C. Lee’s play, places the weight of African-American ascension upon the shoulders of our eponymous lead and as the woman who chooses to spar with him, Spencer is defiant and vulnerable. She shares scenes with Kelvin Harrison Jr. (as Luce) involving thought-provocative dialogue that pose complex questions about race and expectations, and offers few simplistic answers. Is Spencer’s Miss Wilson a dedicated teacher raising valid concerns after troubling warning signs? Or is she an overbearing self-appointed investigator desperately trying to find evidence to support her pre-determinations? We left Luce unable to say one way or the other, but convinced this was an exceptional addition to an already impressive career for Spencer. 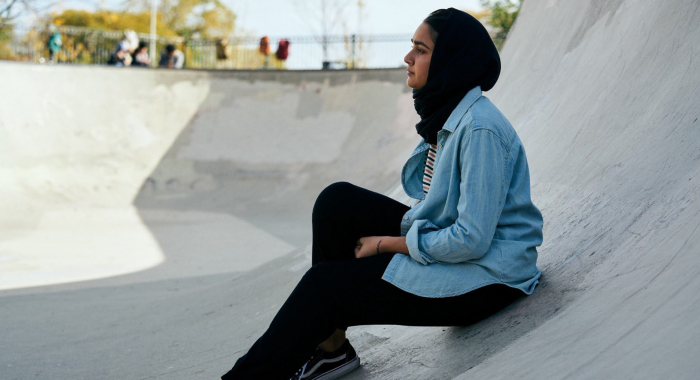 (Photo by Courtesy of Sundance Institute | photo by Parrish Lewis)

After the Blockers premiere in April ’18 at SXSW we expected great things from Geraldine Viswanathan. The hands-down standout from the teen sex comedy, Viswanathan headed to Park City in the title role of Minhal Baig’s debut film Hala, the intimate story of a teenage girl who is struggling to find balance as a Pakistani teen living in America raised in a strict Muslim household. Viswanathan once again shows her comedic chops as the sarcastic first-generation immigrant, but also thrives when placed squarely against her competing ideologies. In the seams of both is where her character eventually finds herself. The film’s portrayal of a teen struggling with her disapproving mother, played against an exploration of sex, art, and religion, is not exactly groundbreaking, but it is refreshing to see it from a Muslim teenager’s perspective. Viswanathan’s acting and Baig’s semi-autobiographical script give life and authenticity to a character we don’t often see represented on screen. 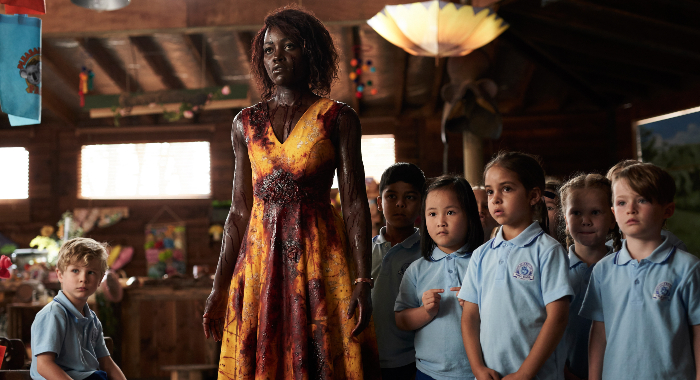 (Photo by Courtesy of Sundance Institute | photo by Ben King)

Between this and Us, Lupita Nyong’o is going all in for horror in 2019. In Little Monsters, she plays a school teacher at an Australian elementary school who is on a field trip when a military accident unleashes a horde of zombies; she and the slacker uncle of one of her students are the only adults who can protect the kids against the brain-eaters. Trapped in a farm-themed amusement park with a wannabe musician and a degenerate children’s television host (Josh Gad), Nyong’o is the emotional anchor and heart of the film. This Aussie Shaun of the Dead fashions Nyong’o as a mix of that film’s Shaun and Walking Dead favorite Michonne’s badassness, and the Black Panther actress shows off some spectacular zombie-slaying and ukulele-playing skills: trust us when we say “Shake It Off” will never sound the same again. 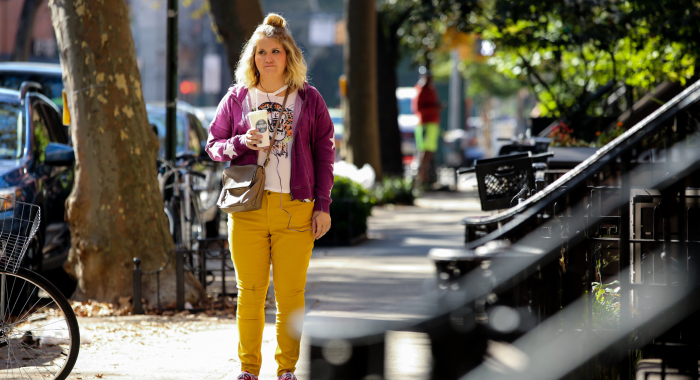 (Photo by Courtesy of Sundance Institute | photo by Jon Pack)

Brittany ran the marathon, but Jillian Bell stole the show. Ever since the first season of Workaholics, we have been cracking up from the comedienne’s antics and broad humor. Bell gives a star-making performance as Brittany, an overweight twentysomething who gets a wake-up call when a bogus doctor’s visit to score Adderall results in warnings about her health and wellbeing. With every mile she runs in preparation for the New York Marathon, we watch Britanny make herself over, and by the end, all of us are ready to cheer her to the finish line. While training for the marathon, she meets Jern, played by Utkarsh Ambudkar, and while we don’t want to give too much away, the verbal sparring between these two provides some of the biggest laughs in the film. Not saying that everyone will run a marathon after watching it, but plenty will want to give it a try. 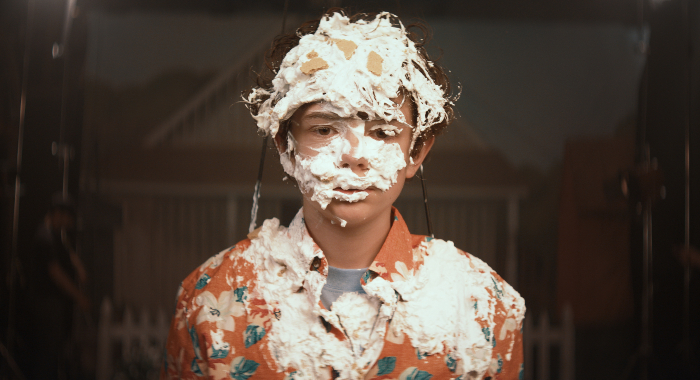 (Photo by Courtesy of Sundance Institute | photo by Natasha Braier)

Noah Jupe has quietly become one of the most acclaimed child actors in Hollywood. At only 13, he has starred in two bona fide hits (A Quiet Place and Wonder) and racked up stellar reviews for his work. Honey Boy is about to take him to the next level. Shia LaBeouf’s semi-autobiographical retelling of his tumultuous childhood has the young Brit playing LaBeouf in his formative years, while Boy Erased actor Lucas Hedges plays the adult version in Alma Har’el’s first narrative feature. Hedges provides the contemporary context, but much of the narrative rests entirely on Jupe’s teenaged shoulders – and he goes toe-to-toe with LaBeouf, who plays a version of his own father. More than a vanity project, Honey Boy is a smart and candid depiction of a former child star’s bad behavior and damaged childhood with an incredibly gifted young performer at its center. 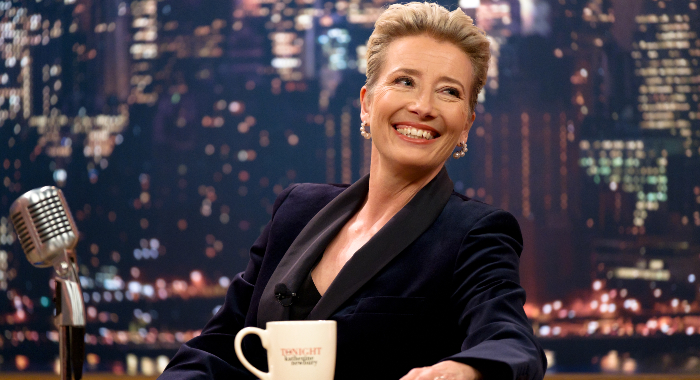 (Photo by Courtesy of Sundance Institute | photo by Emily Aragones)

Dame Emma Thompson as a highbrow late-night talk show host is the kind of genius casting that you didn’t know you needed in your life. Screenwriter and co-star Mindy Kaling said that she wrote Thompson’s part as a piece of fan fiction, and the result is a Dame Emma fangirl’s dream come true. Witty, sarcastic, brilliant – the British thespian here is part Miranda Priestly from The Devil Wears Prada, part David Letterman. Kaling plays the wide-eyed new writer who desperately wants to win her boss’s affection, and Thompson’s constant dismissal of her eternal cheerfulness is side-splittingly funny. More than just an ‘Iron Lady,’ Thompson also shows signs of tenderness behind the derision in this uncynical crowdpleaser. Sold to Amazon for a whopping $13 million, Late Night looks to run The Big Sick’s playbook to similar box office success and maybe some award buzz for our Dame. 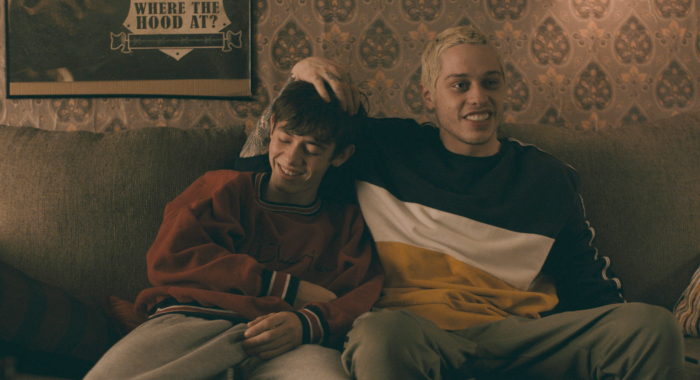 It’s fair to say going into Sundance that we did not think that SNL‘s Pete Davidson would make this list. But in Big Time Adolescence, Davidson plays the worst version of his assumed identity and shows real range. Another tale of arrested development, Big Time Adolescence is about a drug-addled man child – Davidson’s Zeke – who befriends the only person who still thinks he’s cool, his ex-girlfriend’s teenage brother. Picture James Franco’s Daniel from Freaks and Geeks with tattoos, dyed blonde hair, and less charm. The predictable antics ensue, and his young protégé Mo (Griffin Glick) begins to see the cracks in the bravado and realizes that Zeke’s laid-back persona is just a mask for his perpetual f—up status. Davidson is a brilliant comedic actor, and his timing is never off beat in the kind of role that Saturday Night Live players have often used to catapult to superstardom. Charismatic, hilarious, and at times painful to watch, the actor shows what he is capable of doing and we’re intrigued to see what he does next. 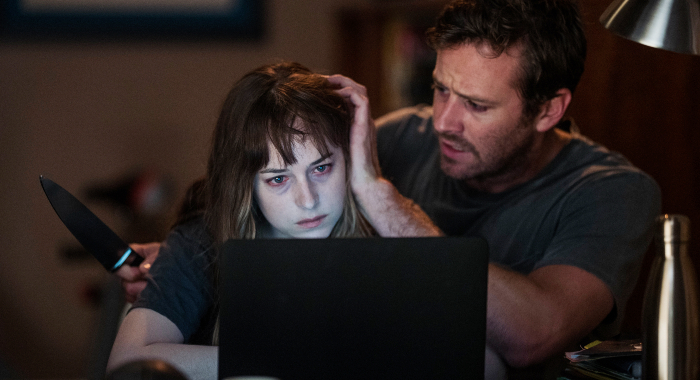 Of all the “big departure” performances at this year’s festival, Armie Hammer’s turn in Wounds was the most dramatic. In Babak Anvari’s follow-up to Under the Shadow, Hammer plays Will, an apathetic alcoholic bartender who picks up a lost cellphone, unlocks it, and gets his life changed forever. In really gnarly ways. Light years away from anything else he’s done, Hammer is a hulking, sweaty, paranoid mess in this genuinely terrifying horror thriller. At 69% on the Tomatometer, reactions to the film have been mixed overall, but praise for Hammer has been universal. His first dip into horror sees the Call Me By Your Name star creeping everyone out and ditching his dreamboat persona for cockroaches and gore.