RT spends a week with Edward, Bella, and Jacob to see what the fuss is all about.

It’s had its share of detractors and naysayers, but Stephenie Meyer’s Twilight Saga has become a bona fide cultural phenomenon, a popular and lucrative franchise that has raked in over $2 billion at the box office and spurred a renewed obsession with vampires and werewolves. Unfortunately for its fans, however, the series will draw to a close this weekend with the release of its final chapter, Breaking Dawn, Part 2. As such, we thought it would be a good time to hunker down and examine what it is, exactly, that makes the series such a hit. To that end, we’ve commissioned two dedicated RT staffers — one fan and one neophyte — to trade observations on The Twilight Saga, and it all begins right here with the first film, Twilight.

Cat: I found myself enjoying this film much more than I expected. At the same time, I wish it had been a better film all around because I like the concept of forbidden love. To begin with, instead of coming off as charmingly awkward, it is almost painful to watch KStew’s interpretation of Bella. Which in turn seems a little far-fetched to have every teenage boy in town find her so enchanting. Also, did anyone else think Bella and Jacob almost look like twins with that long hair Jake’s rockin’? But I digress.

Jeff: I actually found Stewart’s performance to be one of the least problematic things about the setup. Which isn’t to say her Tourette’s-style interpretation of suburban teen behavior didn’t give me fits, but I was initially distracted by other things — like the wagonload of stereotypes the opening act rolls out (hey, look at that — a friendly nerd to show Bella the ropes at her new school), the stilted, awful dialogue, and the annoyingly obvious cinematography. I came into this movie without reading any of the books, but had to review Stephenie Meyer’s “grown-up novel” The Host, so I knew the actors would be facing an uphill battle, and I didn’t begrudge Stewart and Robert Pattinson their issues with the material. They aren’t any good, but neither is the script.

C: When Bella has her first encounter with Edward in science class, the scene comes across as completely laughable. Not only did it feel like a cheesy ’80s hair video, Edward’s look of disgust was incredibly overacted. On the flip side, when it came to Bella’s friends, I found Anna Kendrick’s portrayal of Jessica to be a breath of fresh air in an otherwise lifeless (pun intended) town. She brought a realistic sense to her character creating a great banter that was amusing and spot on.

J: I wanted Kendrick’s character to have her own movie. She seems like an idiot, but at least she smiles once in awhile. And we’re in complete agreement on the unintentionally laughable nature of the movie’s most “meaningful” scenes — from the slo-mo fan shot in the science lab to the couple’s breakthrough moment in the woods when Edward reveals his glitterball face to the baseball game — more on that in a bit — Twilight continually mistakes ponderous for thought-provoking. Teen love is all-consuming, sure. But these kids are either stuttering like nincompoops or waxing would-be poetic with horrible lines like the infamous “And so the lion fell in love with the lamb.”

C: I have to admit there were a few LOL moments which were mainly due to Edward. Pattinson really tried to show the light-hearted side of the Edward that’s written in the books, but in the end I felt disappointed with his rendition; it was forced and overtly unnatural.

J: Pattinson is absolutely flailing in this film, but again, I cut him some slack, because I felt like he was probably just trying to get a bead on how and why a hundred-year-old vampire would fall head over heels in love with a lip-biting sad sack within a few seconds of seeing her, and then risk his clan’s survival just for some cuddling and tree-climbing. There are background characters in sitcoms and soaps that are more believably sketched out than the leads in Twilight.

C: For me, where the film got it right was the portrayal of sexual tension. There was enough push/pull for it to feel believable considering we’re dealing with teenagers. I also felt Bella had a lot more bite to her than I originally recall which gave me a little bit of respect for her character.

J: The tension rang hollow for me because I felt like the movie poured it all on at a moment’s notice. At first, Bella’s interest in Edward seems motivated more by pique than anything else — how dare he not like me? — and then all of a sudden it’s such a full-bore obsession that she’s dry-humping him against a log and not only believing he’s a vampire, but yelling at him that she doesn’t care. Actual line from my notes: “WHAT THE HELL IS WRONG WITH THIS GIRL WHO FALLS IN LOVE WITH A VAMPIRE STALKER.”

C: A highlight to the film was the baseball scene. Since when DO vampires play baseball? Either way, its random shift was pleasant until the bad vampires came and started hissing like cats with the Cullens. I also found the soundtrack to the film to really fit. Catherine Hardwicke seemed to be going for an indie style approach and the music added to that atmosphere. I especially loved the scene (probably my favorite in the film) where Bella and Edward drive by the diner on their way out of town to save her and she gazes upon her friends having a carefree time realizing the life she could have had; what she’s given up for Edward. That split second gave her character more credibility than I felt from her in the whole movie.

J: The baseball game, the cuddling in the woods, and that laugh-out-loud piano interlude were the three segments of the movie that I thought really stood out like a sore thumb — Hardwicke’s direction is really intrusive in these spots, and while the editing and wild overacting is a nice change in some respects from all the anguished whining, they’re still pretty clunky, and they don’t really do anything for the movie. A film this melodramatic needs a light touch, and Twilight never gets it.

C: I really enjoyed the ending, much more than I remember. I initially thought it wrapped up so abruptly with Victoria waiting in the wings; plotting her revenge. This time around, its sudden conclusion seemed to fit. However, can someone please explain why this whole movie was so blue? And I don’t mean in tone.

J: I’ll say that I thought the climactic action sequence wasn’t bad, at least in terms of presenting the fight between Edward and James in a way that made sense and not jumbling up the action with quick cuts and hand-held nonsense. But the rest of it didn’t impress me as much. Bella’s cop father letting her just walk out of the house with a duffel bag and half an explanation was ridiculous, and the final fruition of the book’s heavy-handed sex allegory during the prom scene wasn’t done any favors by the thuddingly flat line readings. I couldn’t wait for Victoria to swoop down and kill everyone.

C: So, how can I say that I like this film when I’ve torn it apart so much? I find the simple nature of teenage lust — sorry, this is not love — to be endearing in a nostalgic way. Instead of the normal blocks in the road when it comes to puppy love, we have vampires, which are way more amusing. However, I don’t think this film will hold up over time, and clearly neither does Hollywood, with the rumors of a reboot already causing chatter.

J: I’m clearly in the minority, given the bazillions of dollars this franchise has generated, but just judging from the first film in the series, I have to say — this isn’t a believable world on any level, and I don’t care about anyone in it. I’m still on board to experience the rest of the films, because I’m a masochist, but I don’t think Meyer is a skilled storyteller; she has to rely on her books’ timeless themes to get by, and here, they’re smothered by her wooden dialogue and poorly sketched characters. Here’s hoping the rest of the series manages to transcend those flaws. 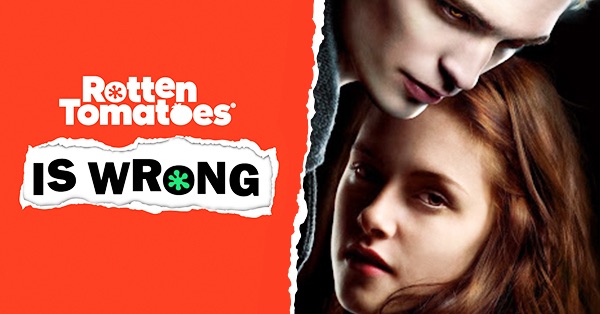 “Rotten Tomatoes Is Wrong” About… Twilight