Cobra Kai Deserves an Emmy, and So Do These 8 Other Shows

From feel-good family fare that tackles serious issues (Jane the Virgin) to super-smart legal dramas (The Good Fight) and everything in between, here are eight top-notch TV shows that deserve recognition from the Television Academy. 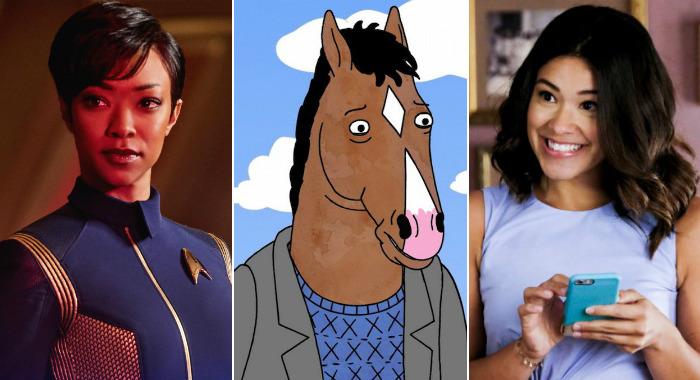 (Photo by CBS All Access/Netflix/The CW)

The long of it: In 2017 alone, 487 scripted original series aired on television or streaming services.That’s a 69% increase from 2012 to 2017, according to tracking done by FX Networks Research. At the rate new TV is being made, 2018 should out-pace every other year with more than 500 original series airing.

The short of it: There’s a lot of TV. And though some of it is clutter, there is also more outstanding television being made than ever before.

As the Television Academy gears up to name the nominees for the 2018 Emmy Awards, recognizing excellence in an ever-more-populated field, there’s a heck of a lot more excellence out there than there ever was.

That’s why it seems like your Netflix queue is ever-growing, and it’s also why, come July 12, you should not be surprised if your favorite TV show doesn’t get a nod. There’s simply too much good TV out there to recognize it all. There are plenty of TV staples that will get recognized when the nominations are revealed (ahem, Game of Thrones), but Rotten Tomatoes’ TV team humbly suggests voters (and non-voters alike) also take a look at these exceptional, new, and heretofore overlooked-by-the-Emmys titles. And while some of the actors in these series may get a nod for their work, the series themselves probably won’t get nominated, but that doesn’t mean they’re any less deserving.

Who Stars In It: Tyler Alvarez, Griffin Gluck, Jimmy Tatro

What’s It’s About: A mockumentary in the style of docuseries like Making a Murderer, the show sees Peter Maldonado (Alvarez) trying to solve a case of vandalism in the teacher’s parking lot. The school expelled Dylan Maxwell (Tatro) for drawing penises on the cars, but Peter thinks Dylan’s been framed.

Why It Deserves an Emmy: First of all, just making a mockumentary with the gravitas of Making a Murderer over such an immature act is hilarious. But just like Dylan’s alleged crime, there’s more under the surface of American Vandal. Creators Dan Perrault and Tony Yacenda have crafted a genuine mystery that keeps you guessing in each of its eight episodes. By the end, you’re truly invested in who drew the dirty pictures and feel emotionally attached to the characters involved. Now that’s some Emmy-worthy dramedy. – Fred Topel

What It’s About: Bojack Horseman (Arnett) was a washed-up sitcom star in Hollywoo, a world of humans and anthropomorphized animals mixed together. He’s managed to get taken seriously as an actor by playing Secretariat in a movie. His agent, the cat Princess Caroline (Sedaris), is trying to start a family while she manages Bojack’s crises. His rival, the dog Mr. Peanutbutter (Tompkins), is in a relationship with his biographer, the human Diane (Brie), and Bojack’s former roommate Todd (Paul) is is exploring his asexuality.

Why It Deserves an Emmy: If it were only a brilliant animated spoof of Hollywood, Bojack Horseman would already be up there with The Simpsons and South Park; however, there’s real drama in the animated series — and using animation, Bojack can tackle stories that live-action never could. The best example is its season 3 episode, “Fish out of Water,” which takes place entirely underwater with no dialogue. Season 4 had a strong contender in “Time’s Arrow,” which delves into the dementia-addled memory of Bojack’s mother (Wendie Malick), who is searching for her beloved Henrietta (whose face is scratched out of all the animation). It’s profound, heartbreaking stuff.

Creator Raphael Bob-Waksberg believes making the characters animals made some of the more somber material palatable. “I think if we were a live-action show, people might feel like this is a little too much, this is a little saccharine or a little too oppressive,” Bob-Waksberg told Rotten Tomatoes. “Because it’s this goofy horse face saying these words, it claws a new way in.” – Fred Topel

What It’s About: This show revisits the main characters of The Karate Kid 30 years later, but from the perspective of high school bully Johnny Lawrence (Zabka). Losing the All Valley Karate tournament sent his life on a downward spiral, so he believes re-opening the old Cobra Kai dojo will give him purpose again. Daniel LaRusso (Macchio) is his nemesis, since karate’s been so good to him, Danielsan still trades off of his karate victory as a local hero and auto-sales tycoon.

Why It Deserves an Emmy: The idea of a Karate Kid reunion seemed at best like nostalgia and at worst like a joke. The fact that Cobra Kai is a genuinely good drama despite those expectations is a victory worthy of Daniel’s crane kick. Zabka and Macchio both get to play heavy drama about falling back into childish patterns. The younger characters tell a powerful Karate Kid story for teens of the social media generation. The bullied can so easily become bullies themselves, and women still have a lot of fight ahead of them in the worlds of sports, school, and love. Daniel’s daughter Samantha (Mouser) and Johnny’s students Miguel (Mariduena) and Aisha (Brown) could easily carry this series once the original Karate Kids retire. – Fred Topel

What It’s About: The best of espionage and science fiction converge in this complicated and well thought-out freshman drama in which Howard Silk, a lowly cog in a quasi-governmental bureaucratic spy machine, discovers his organization guards the gateway to a parallel world.

Why It Deserves an Emmy: The premise of creator Justin Marks’ Starz drama is so complex it’s actually quite simple: J.K. Simmons is Patty Duking it as the mild-mannered government desk warmer Howard Silk and his considerably more Alpha “counterpart” who has recently crossed over from the unknown-to-Howard other dimension to warn that there’s a mole in the operation. A heavy rotation of scenery-chewing supporting cast members (some of whom are also, naturally, playing dual parts) add to this paranoid universe of cover-ups, germ warfare, spy chases, and double agents, which would be all the makings for a must-watch prestige drama if Counterpart were on a broadcast or basic cable channel. – Whitney Friedlander

What It’s About: A continuation of The Good Wife featuring Christine Baranski’s Diane Lockhart, the series follows an on-the-verge-of-retirement Diane as she loses her life savings and goes back to work at a new, all-black law firm.

Why It Deserves an Emmy: The Good Fight feels a lot like The Good Wife in all the best ways. It’s an eclectic ensemble with Baranski at the center and a rotating lineup of delightful guest stars. Season 2 has tackled liberal frustration with the Trump Administration (episodes are named after how many days the Celebrity Apprentice star has been in office) in a funny yet all-too-real way, along with everything from the serious (racially motivated police violence) to the silly (microdosing on mushrooms) with some smartly deployed F-bombs, too. This is streaming, after all. — Jean Bentley

What It’s About: A rom-com about an accidentally artificially inseminated millennial that’s both feminist and funny.

Why It Deserves an Emmy: For all the hoopla surrounding NBC’s This is Us – it’s multi-generational and sometimes super sad! – the thing people seem to be missing most about that show is that it’s frankly not that good once they get past their own empathetic crying. Instead, please consider CW’s Jane the Virgin. Creator Jennie Snyder Urman’s telenovela has all of the above, but it also doesn’t take itself that seriously when handling substantial topics like parental abandonment, moving on after loss, and career reinvention. Just here for the stunt casting and Twitter-friendly cliffhangers? Brooke Shields cameoed this season as a Hollywood A-lister named River Fields and guest star Rosario Dawson’s JR accidentally shot someone in the finale — prompting those of us at home to ponder #JRShotWho?, until next season.  – Whitney Friedlander

What It’s About: Three generations of a Cuban-American family are living together in Los Angeles under one roof: recently divorced military vet single mom Penelope (Machado), Penelope’s old-school mother, Lydia (Moreno), and her tween son and teen daughter, Alex (Ruiz) and Elena (Gomez).

Why It Deserves an Emmy: Roseanne might have gotten the ax, but that doesn’t mean there aren’t any more multi-camera sitcoms deftly tackling the plight of working-class Americans. The re-imagining of Norman Lear’s classic addresses plenty of hot-button political issues (with stellar performances by Moreno, Gomez, and Machado, in particular), but, more importantly, it’s a show about a family that truly loves each other. Isn’t heart what 2018 needs most of all? — Jean Bentley

What It’s About: The Star Trek universe returns to TV in a prequel to the Original Series. Martin-Green plays disgraced Starfleet officer Michael Burnham, the adopted sister to franchise favorite character Spock.

Why It Deserves an Emmy: With outstanding performances by a talented ensemble cast, singling out any one of them with an Emmy nod may seem as daunting as facing down a Klingon Bird-of-Prey in an away shuttle. The series, however, takes its drama seriously, enveloping viewers in a believably treacherous world that pays homage to earlier Star Trek TV efforts, while surpassing them with film franchise–quality effects and standout performance by Isaacs as the troubled Captain Gabriel Lorca. — Debbie Day

What It’s About: A fictionalized account of a Royal Navy voyage to the Arctic in the 1840s offers a supernatural explanation for the disappearance of Captain Sir John Franklin’s lost expedition to find the Northwest Passage.