5 Biggest Moments of Orange Is the New Black Season 5 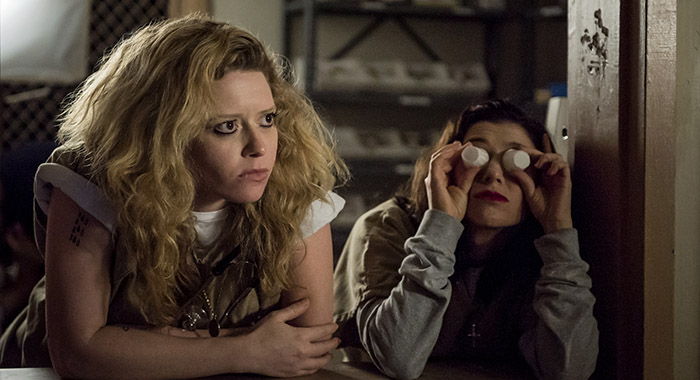 Orange Is the New Black dropped its fifth season Friday, June 9, and fans immediately descended upon it like a pack of wild dogs. And who can blame them? Season 4 left off with a cliffhanger of an impending inmate riot and details about the fifth season revealed it would take place during the inmates’ three-day standoff at Litchfield. It doesn’t get much more intense than that.

So it’s unsurprising that the fifth season was rife with incredible moments — funny moments, scary moments — and some of the best acting the show has seen to date. Here are the five moments fans were buzzing about the most.

Warning: Spoilers ahead for the entire fifth season of Orange Is the New Black. 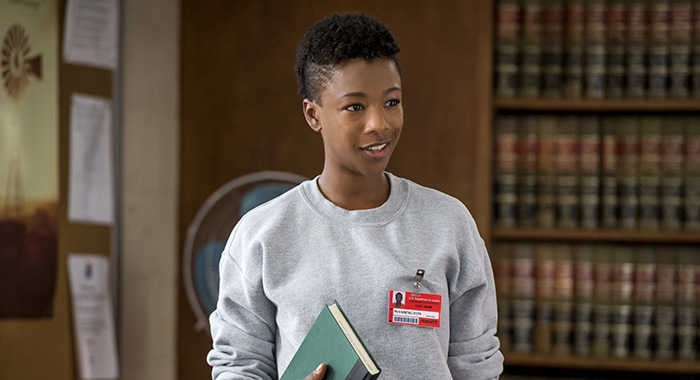 Poussey’s (Samira Wiley) death at the end of season 4 is what catapulted the inmates into the season 5 action, so naturally her presence is all over the new season — though she only appears in a brief scene during Taystee’s (Danielle Brooks) flashback episode.

But whether it was an impromptu dining hall memorial, the most permanent hallway library memorial or Taystee’s flashback, fans were here for anything Poussey-related.

I SCREAMED WHEN I SAW POUSSEY IN SEASON 5 #oitnb pic.twitter.com/1oUx3nIplu

When Poussey comes back in a flashback #OITNB5 #OITNB pic.twitter.com/UsP5bO2s7r

Footage of me watching the scene where Poussey and Taystee first met #oitnb pic.twitter.com/gFxRDB786e 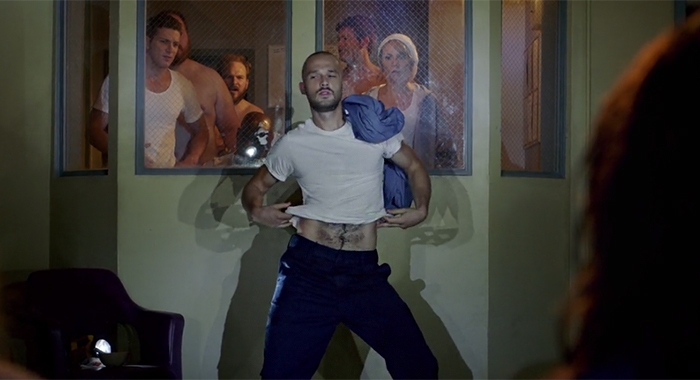 While most of OITNB season 5 was drama filled and action packed, there was still plenty of levity. One of the funny scenes fans liked the most was the guards being made to perform a talent show for the inmates, particularly CO Stratman (Evan Hall) taking it allll off for the ladies. Hall’s commitment to the strip tease was impressive indeed.

I think CO Stratman is my favourite character in OITNB. pic.twitter.com/4z75zxDfv2

YOOOO I hate the guards on oitnb but CO stratman is so fine pic.twitter.com/VVaDHsVOCH

CO Stratman in the Litchfield's Got Talent ep of #OITNB… ?Woof!!!! pic.twitter.com/8bGli4TFdZ 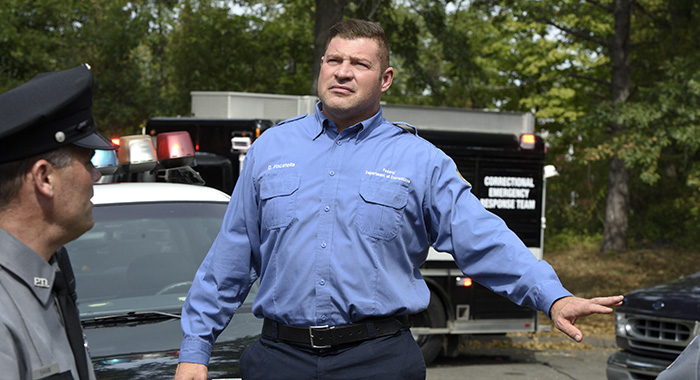 Arguably the most insidious character of seasons 4 and 5 (and maybe the entire series) is CO Piscatella (Brad William Henke), because his attitude toward and treatment of the inmates sets the tone for all the guards and makes life at Litchfield hell.

In episode 10, viewers finally learn the story behind Piscatella and the inmate he killed in max — but it’s really a case of too little, too late at this point.

Y'all really showing me Piscatella's little love story as if I cared about him #oitnb pic.twitter.com/2Ns4QcuN3X

Me waiting for Piscatella to die #OITNB pic.twitter.com/SM1sWRNYXZ

Congrats to @bwhenke for his acting as Piscatella cause I've never hated a character so much since Dolores Umbridge in Harry Potter #OITNB pic.twitter.com/mCdVufwGx1

Piscatella’s stalking and kidnapping of Red (Kate Mulgrew) and her prison friends is one of season’s scarier plotlines, but it definitely made for some good social media memes.

Piscatella is in the damn prison. I am rocking back and forth. I am stressed. #OITNB pic.twitter.com/jUWB02ZTZb 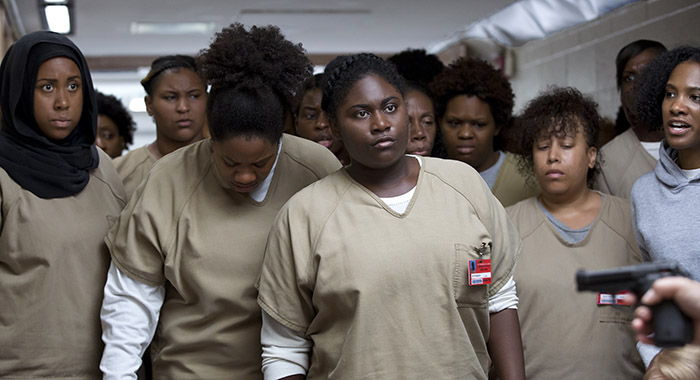 OITNB may have started out as a show about Piper Chapman (Taylor Schilling), but season 5 was Taystee’s show and actress Brooks handled the heavy material with aplomb.

Fans especially praised her speech to the media in episode 6, but her work throughout the season was stellar. One thing fans all seem to agree on is that if she isn’t nominated for some awards for this season, it will be the ultimate snub.

.@thedanieb SIS, what do we gotta do to start your campaign for an Emmy nom, NOW. You outdid yourself this season. #OITNB pic.twitter.com/o7o3YUlTTt

This scene is so powerful! It reflects the current state of the society so much #OITNB pic.twitter.com/wj8G7cGuHe

Between this season of OITNB and The Color Purple, I am now convinced Danielle Brooks is one of the greatest actors working today

If Danielle Brooks doesn't get at least nominated for all the awards for this scene, something is wrong. #OITNB pic.twitter.com/MpQnN8V4pR

give danielle brooks all the awards for her A+ acting this season of #oitnb pic.twitter.com/iL8WnrdP95 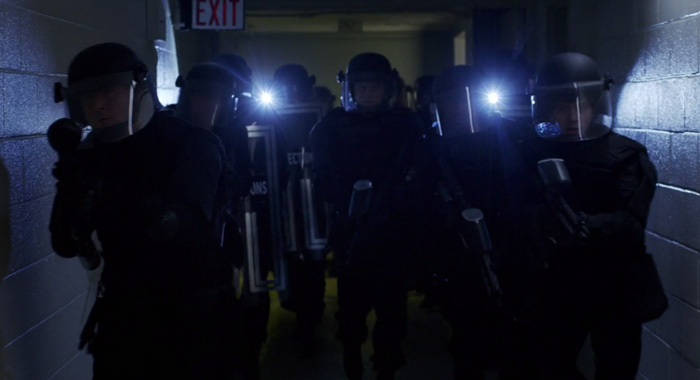 The season ended on a harrowing episode where New York SWAT secured the prison and led every inmate out in handcuffs to await their fate — except the women making a stand in Frieda’s (Dale Soules) bunker in the prison’s defunct swimming pool. Fans were blown away by both the powerful scene of the women taking hands to stare down the security team and also the heartbreak upon learning the inmates are going to be separated and shipped off to various facilities.

These scenes got me so emotional #OITNB pic.twitter.com/US4hWLc4Jw

The ending of OITNB season 5 has me like pic.twitter.com/53nK5yE1hN

When the girls are standing strong while "To Build a Home" is destroying you emotionally… #OITNB pic.twitter.com/pkWlPFuozw

This single scene deserves all the awards ?? #OITNB pic.twitter.com/NuB8Ntrcuc

What this means for season 6 is anybody’s guess, but as is the case with any good binge-watch — once it’s over, everyone freaks out about having to wait a whole year for more episodes.

Me after finishing season 5. Now I have to wait another entire year for the next one! #OITNB pic.twitter.com/39rCvLj1R9

How I feel after the #oitnb finale knowing I have to wait a whole year to see what happened pic.twitter.com/wmEUE2InFM

Orange Is the New Black is now streaming on Netflix.