Featuring the same energy and self-love ethos that defined the original, a next-gen Fab Five is unleashed on the nation.

Have you heard the T? The Fab Five are back! Carson Kressley and his fabulous Queer Eye crew hung up their sheers and skinny jeans in 2007, but the formula they made famous in the early aughts is coming back in a big way to Netflix.

The newly revamped Queer Eye quickly taps into the same energy and self-love ethos that made the original seasons such a sensation. Plus, a little timely social commentary doesn’t hurt, either. This new incarnation is set exclusively in Atlanta, Georgia, and its surrounding suburbs, purportedly to connect the Fab Five with our nation’s more conservative clientele. The season is, after all, about moving from tolerance to “fighting for acceptance.”

Rotten Tomatoes caught up with showrunner David Collins and the new cast, which is made up of Bobby Berk (interior design), Karamo Brown (culture), Antoni Porowski (food and wine), Jonathan Van Ness (grooming), and Tan France (fashion). The guys told us why now’s the time for an all-new Queer Eye, how the series allows them to be themselves loudly and proudly, and how it differs from the original Bravo series — for starters, VanNess said, “[We’re] ripping out some of those ideas and starting fresh and checking in with where we are as a community now.”

1. The new Fab Five knows they have big, stylish shoes to fill. 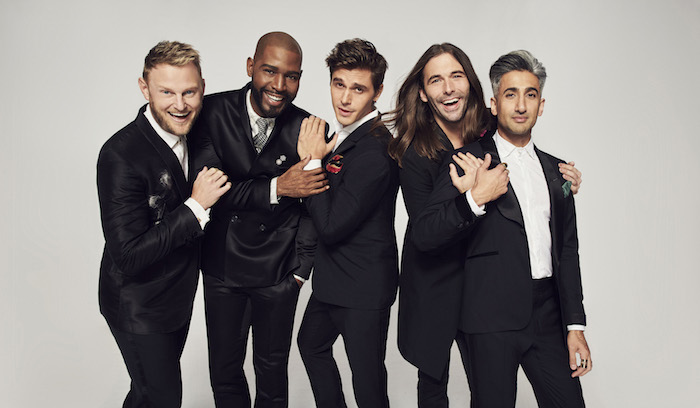 When the original Queer Eye debuted on Bravo in 2003, it marked the first time that real-life queer culture was brought into living rooms nationwide without being a series exclusively catered to the LGBTQ niche. These guys were on Oprah! It’s a fondness and respect — and a pair of big shoes — that the new Fab Five carry with them today.

“My memories of it is just being so happy to see real gay people represented on television and real gay role models,” Berk said. “There were gay shows. There was Queer as Folk, there was Will & Grace, but it was mostly straight actors playing gay people, and the Fab Five were the first true gay guys out there showing us that you can have a successful life, you can be out, you can be proud. [They] gave us real true models to look up to and later become.”

2. This Fab Five is diverse in ways we haven’t seen before. 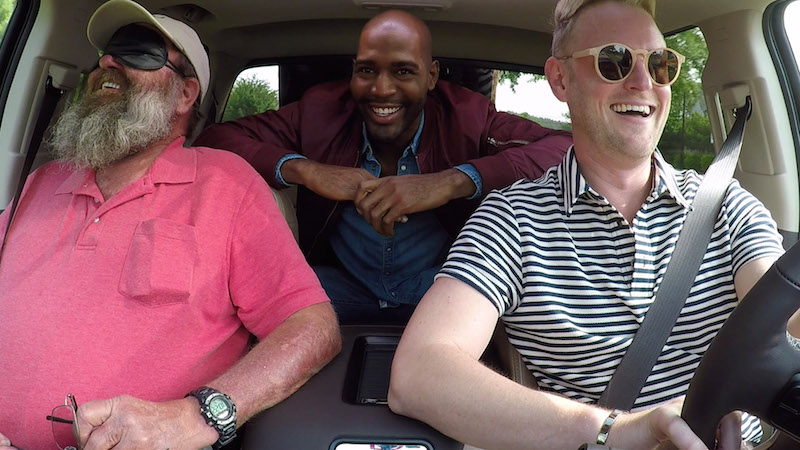 It should be noted here that comparisons between the two casts are not to pit them against each other.

“There’s nothing wrong with the first version of the show, that’s just where we were,” Porowski said.

“And it was necessary to get where we are today,” Brown said.

Van Ness capped it off: “It’s just a little bit different now.” (Can you tell these guys finish each others’ sentences?)

It’s an important distinction to make. But with onscreen diversity playing such a massive part in the cultural conversation today, it was important for this cast to reflect the world in which we live. France, who’s of Pakistani descent, sees it as an opportunity for Queer Eye to resonate with even more audiences around the globe than they did in the past.

“That’s something that I think is really important, and I think it was a great move on Netflix’s part,” he said. “They wanted to make it a much more diverse cast. This is a major global show — this isn’t just for America anymore. It was great that they were able to capture the spirit of America in the first year, but now they really do capture the spirit of the world. We have people from all over and we actually do talk about political issues. We talk about real cultural issues that weren’t talked about in the original show.”

3. And that diversity goes beyond race. 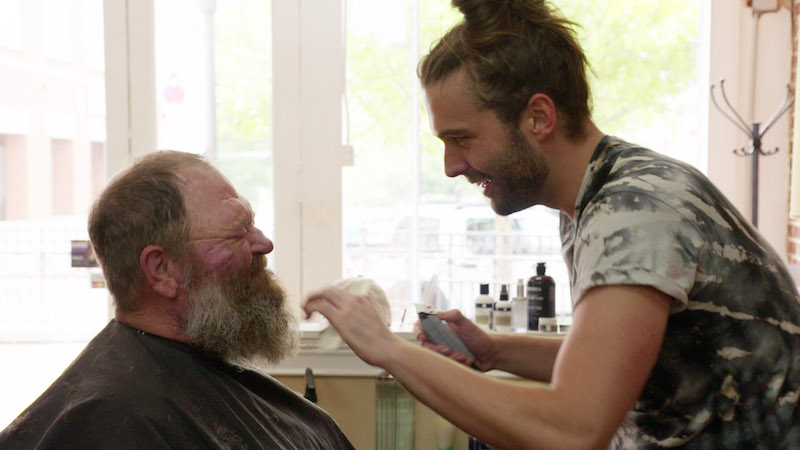 Especially when it comes to LGBTQ representation on TV, things can get, in Brown’s words, a little “cookie-cutter.” This series takes a stab at breaking that mold by showcasing different body types and personality types, in-grown hairs, and all.

VanNess, for instance, said he would rather forget “the moment when I decided I was going to wax my torso for the next two years and had cystic acne all over. I thought that as a gay man, I was supposed to be hairless, and I learned that from what metrosexuality meant. Part of my relationship with the grooming aspect with Queer Eye [was] I kinda wanted to tear that down.”

4. Self-love informs the Fab Five’s rapport with their straight clientele, too. 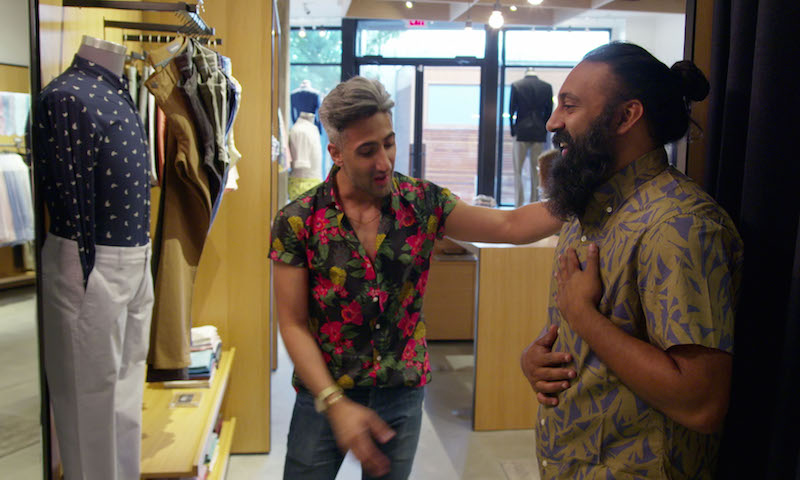 Just like VanNess learned to love his more hirsute nature, it’s evident that the crew’s intent here is to build up rather than tear down those who join them episode to episode. There’s no single secret to personal health and beauty, and these men are not going to be forced into a box. The Fab Five take the time to learn about their wants and needs and then go from there.

“We are coming at it like however you are, that is you,” Berk added. “We’re just gonna show you how to be a little bit better. We’re not gonna make you over. If you’re hairy, great! If you have a beard, great! Let’s teach you how to moisturize it.”

Collins also weighed in on the cast’s rapport with their Georgian guests, saying that they were never mean spirited when playfully throwing shade.

“We do come in all shapes and sizes, so there is no shame in the game. It’s about lifting us up. Confidence, indeed, breeds success,” Collins said.

5. Expect to see a new side of the Fab Five this go-round. 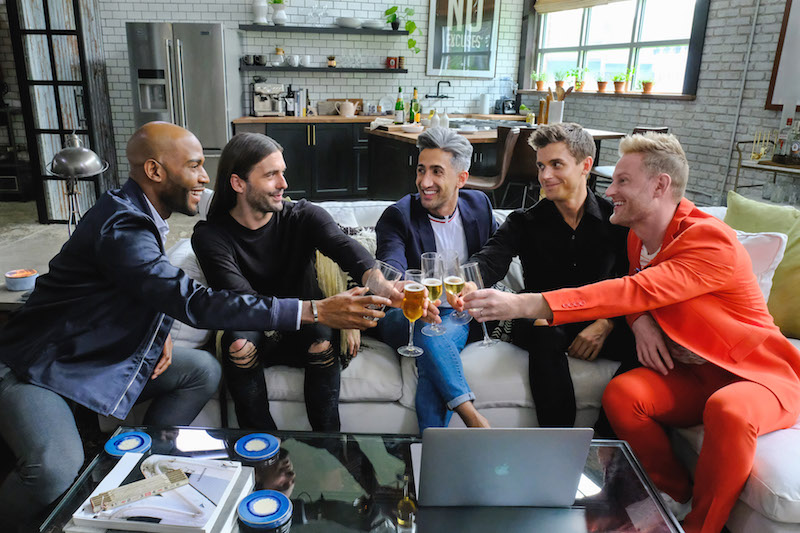 We’re told that with this new Queer Eye, audiences will be treated to a more intimate look at the cast members’ personal lives — less gay caricature and more human being. Getting down to that personal level doesn’t just allow audiences to connect with them more, but for the men that they’re making over to relate and empathize with them and vice versa.

“This time around you learn more about us,” said Brown, who is a single father of two children. Others in the cast are married or in long-term relationships. “We are showing you such diversity of who we are, and I think that’s the breadth of our community. No longer are we trying to say everyone is this cookie-cutter shape that looks the same, that acts the same. We are very diverse, we have different viewpoints, different wants in life, different needs in life that are very similar to our straight counterparts.

“And I think that’s the beauty of what we do with this show,” Brown continued. “We connect on a level that maybe the first show didn’t, because if I’m talking to a dad, I can understand why you’re feeling like you’re not that great with your kids [or] why you feel overwhelmed. [Or] Tan and Bobby can talk about the problems they’re having in their relationship because their married relationship is just like any other married relationship. We do such a great job at representing the community as a whole, but also making it accessible to people who are not used to our community.”

6. The original guys have met the new guys — and given their seal of approval!

“We’ve all been together. It’s been amazing,” Collins said of his recent lunch date with his original cast and his new one. “The original guys couldn’t be more supportive and loving it. Who knows, maybe they’ll be a part of the show someday in a big cast. I don’t know, but, for them, they realize that it’s a new generation and a new opportunity for new voices to tell their story and their truth. And the cool part is that I think Carson, of all [of them], really realized the change that’s happened since 2003 and the opportunity for these guys to be new faces and tell their stories in a different way than Carson, Thom, Kyan, Jai, and Ted did.”