Paying respect to the Queen of Soul who left her mark on cinema. 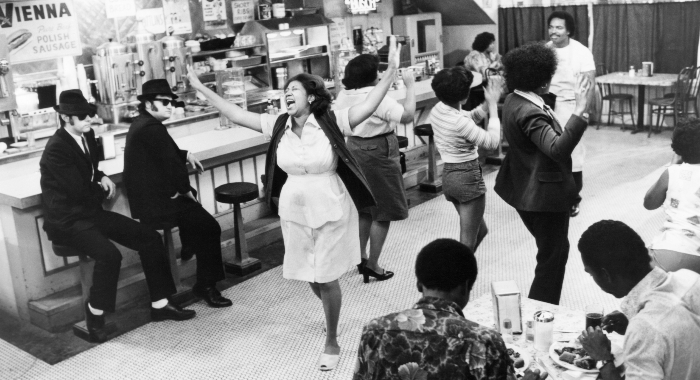 The Queen of Soul is gone, but not forgotten. Aretha Franklin leaves behind a tremendous legacy, which stretches beyond her storied albums and live performances to a slew of unforgettable movie soundtrack moments. Franklin’s songs can be heard in so many movies – and always to their benefit. Below are 11 memorable movie scenes that simply wouldn’t be the same without that voice.

The Scene: Bridget gives Daniel exactly what he deserves.

It’s hard to believe that the hook “R-E-S-P-E-C-T” wasn’t written specifically so that rom-com heroines could deliver a stinger to some bad-boy who’s been playing them, turn around, and have a killer tune to exit on. That’s exactly how the song is used in this scene towards the end of Bridget Jones’ Diary, in which Bridget (Renee Zellweger) finally gives Daniel (Hugh Grant) what’s coming to him. The office workers applaud, and so do we. [Note: The song kicks in right at the end of the clip above – you can see an unauthorized version here.]

The Scene: Barry attempts to sell a number of essential records to a customer.

Top five most memorable songs in High Fidelity – go. “Rock Steady” isn’t one of them? That makes sense, as it’s heard for just a few moments in the record store as Barry (Jack Black) does his magic, selling albums to an easy mark. What it is, what it is, what it is is just a great old classic tune mixed in ahead of something modern like The Beta Band. But every song choice in the movie is memorable; you really can’t ignore High Fidelity when compiling a list of top 10 songs of anything, really.

The Scene: Forrest and Bubba arrive in Vietnam and meet Lt. Dan.

Making up for its absence in Platoon – despite being on that film’s soundtrack! – “Respect” could have just been one part of a medley of token Vietnam War movie tunes in Forrest Gump. But it’s used effectively, and pointedly: it’s respect that Lt. Dan expects from his goofy new grunts, and respect that he will receive. [Check out an unauthorized clip of the scene here.]

The Scene: The team dances in celebration following their first “black box” heist.

The Song: “Chain of Fools”

Another dance sequence, and again it’s set to “Chain of Fools” – because the main team of security specialists here is a bunch of fools, you see? Well, David Strathairn’s Whistler and River Phoenix’s Carl sure move like fools as they and Dan Aykroyd’s Mother and Sidney Poitier’s Crease all get their chance to cut a rug with Liz (Mary McDonnell). Also, they’re happy fools at the time, unaware of just how serious the MacGuffin is that’s now in their possession. [You can find an unauthorized clip of the scene here.]

The Scene: Roberta follows Susan into a vintage clothing shop and buys her secondhand jacket left behind.

Any number of golden oldies could have been used in this scene set inside a vintage clothing store. Why go with a track as familiar as Franklin’s “Respect”? Maybe it’s a random selection, or maybe it’s there to deliberately emphasize the vintage, dated atmosphere of the place. Or maybe it represents the respect the characters give each other in the scene. Whatever it was, we can’t get the scene – or the song – out of our heads.

The Scene: Harold’s wife, Sarah, arranges for him to sleep with Meg, in order to impregnate her, while other couples also make love on their last night at the country house. It’s… complicated.

Song: “(You Make Me Feel Like) A Natural Woman”

While most of the tunes on the The Big Chill soundtrack seem like random nostalgia-fueled oldies, Franklin’s soaring coming-alive song is used very literally, and effectively, here: it highlights Meg’s being made to “feel like a natural woman” in finally trying to conceive a baby. It would be a much weirder scene, given the approved adultery involved, were it not for the soul of Franklin’s vocals. (Seriously, watch it on mute.)

The Scene: Henry narrates his relationship with his mistress Janice as she shows her girlfriends around her new apartment and he beats up her boss.

Martin Scorsese is very deliberate with his soundtrack choices, and “Baby, I Love You” is so, so apt for a montage devoted to a part-time lover. Franklin sings desperate lyrics to a potentially temporary or unrequited beau, one that she says she loves without a doubt.

The Scene: The archangel Michael dances around a bar, luring all the women in the place with his cookie scent.

The Song: “Chain of Fools”

Who doesn’t love a John Travolta dance number, just for the heck of it? And this might be his wildest ever, paired beautifully with a song about fools. Of course an archangel would choose a song that basically parodies a gospel tune and is sung by a goddess such as Franklin – he does seem to pray or bow to her at the song’s start – to magically play on the jukebox.

The Scene: Creepy ex-con Max Cady calls up the teenaged Danielle pretending to be her drama teacher.

The Song: “Do Right Woman, Do Right Man”

Trust in Max Cady, because he’s the “do right man.” No, no, no, he’s most certainly the do-wrong man. In Scorsese’s Cape Fear remake, Robert De Niro’s ultimate harasser turns a feminist tune by Franklin, with lyrics about how men need to respect women, into a sleazy tool for the seduction of a little girl. [Check out an unauthorized clip of the scene here.]

The Scene: Grown-up Chiron (a.k.a. “Black”) enters the diner where Kevin works.

The Song: “One Step Ahead”

This tune about the anticipation of potential heartbreak actually plays twice in Barry Jenkins’ Best Picture winner. We first hear “One Step Ahead” when Chiron is younger and enters his home to the heartbreaking realization that his mother is a junkie. When we hear the song again, as the grown Chiron enters a place that might also bring heartbreak, the hues are more hopeful, but the sense of uncertainty remains.

The Scene: The diner-waitress wife of Matt “Guitar” Murphy does not approve of hubs going off with the Blues Brothers.

You better think (think!) about what a perfect scene this is. As Mrs. Murphy, Franklin made her movie debut performing her own hit song, which she had co-written with her then real-life husband. A feminist anthem, “Think” is used for a musical number in which a woman tells her man to consider what will happen if he hits the road. “You better think about the consequences of your actions,” she says to her onscreen guitarist hubby, kicking off the iconic diner sequence. Franklin would later return as Mrs. Murphy in the sequel Blues Brothers 2000 to perform “Respect” for a similar number, this time set in a car dealership.