Will Ferrell and Jon Favreau reveal how they conjured Christmas magic, why the movie endures, and which Elf moment brought Ferrell to tears.

Watch: Jon Favreau and will Farrell on the making of Elf above.

In 2019, Rotten Tomatoes will turn 21, and to mark the occasion we’re celebrating the 21 Most Memorable Moments from the movies over the last 21 years. In a special video series launching next year, we will speak to the actors and filmmakers who made those moments happen, revealing behind-the-scenes details of how they came to be and diving deep into why they’ve stuck with us for so long. Once we’ve announced all 21, it will be up to you, the fans, to vote for which is the most memorable moment of all. As a special preview of the series, we’re dropping our first ‘21 Most Memorable Moments’ video right now: Will Ferrell and Jon Favreau take us behind the scenes of Elf.

Fifteen years after its release, Elf is a bona fide Christmas classic – arguably the only Christmas movie released in the last 20 years to truly deserve that title. Don’t believe us? Turn on your TV this month. Or take a look at a T-shirt rack this week and marvel at the number Elf-inspired memes plastering the seasonal tees.

A Christmas classic is exactly what director Jon Favreau, who initially came on board the project for rewrites, wanted to make. Inspired by Rankin Bass Christmas specials, as well as the joy and energy emanating from his fresh out-of-SNL star, Favreau hit the streets of New York City – less than two years after 9/11 – to craft a long-lasting piece of seasonal joy from the simple tale of an Elf named Buddy and his journey to the big smoke to find his dad.

“My pitch was to make it feel like Buddy was a human that grew up in a ’60s Christmas special.”

Jon Favreau: “I was actually hired on to do rewrites. There was an original script that was quite different in tone. It was a much harder comedy. My pitch when I was hired to write was to make it feel like Buddy was a human that grew up in a ’60s Christmas special. And I brought it down from a harder PG-13 to a PG film. The innocence was something that I really wanted to lean into as I worked on it. He was always an innocent character, but he was a bit more of a foil to the action and to the comedy. I tried to strike a balance that was a bit sweeter.” 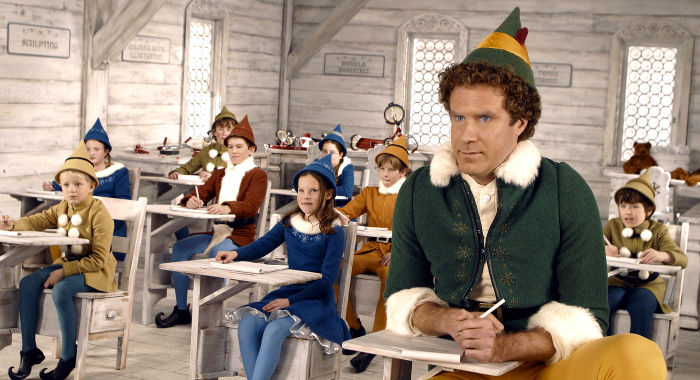 “There’s this impression where, when you leave a show like SNL, you just have all these things lined up – and I really didn’t.”

Will Ferrell: “I [had] left Saturday Night Live. I think there’s always this impression where, when you leave a show like that, you just have all these things lined up – and I really didn’t. I had Old School, that was finished, but they were holding onto it. They weren’t releasing it quite yet, which is usually not a good sign. And then I had this script about a guy playing an elf…a human being raised by elves. And that was really all that was percolating. [But] this idea that a human is raised by elves at the North Pole, it just felt like something you’d never seen before. A classic fish-out-of-water story.”

“We shot a lot of that stuff independent-film–style with a van and a camera.”

Favreau: “Instead of hiring a lot of extras, we shot a lot of that stuff [Buddy on the streets of New York] independent-film–style with a van and a camera. Went out there and then we got people to sign releases. Of course, Will has really good comedic concentration so he was able to stay in character the whole time, and we used what worked. He’s really the key to the whole thing. He’s got such a wonderful energy and presence, and just him wearing that outfit was so inherently funny anyway because of his size.” 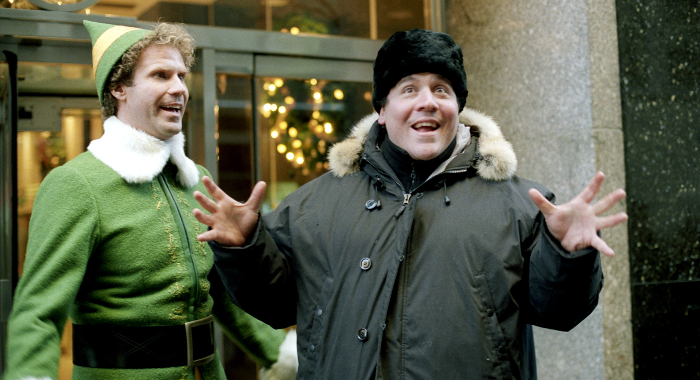 “I was running around the streets of New York in yellow tights thinking to myself, Boy, I do hope this works.”

Ferrell: “I was kind of known at Saturday Night Live for – yes, for sketches like the [Spartan] Cheerleaders and things like that – but also for a lot of really edgy stuff. For every grandmother that came up to me and said, ‘I love this,’ I had the rowdy frat guy who was citing something he liked from the show. So here I was running around the streets of New York in yellow tights thinking to myself, Boy, I do hope this works, for a number of reasons. But this could easily be my last movie.”

Picking one moment from Elf was nearly impossible. Would you go with the scene in which Buddy tells the Gimbel’s mall Santa, “You sit on a throne of lies”? (We almost did.) Perhaps his syrup-and-spaghetti feast? (The look on James Caan’s face: Priceless.) We landed on the moment when Buddy hears that Santa will be arriving at Gimbel’s and just about explodes with excitement. Perhaps no other moment in the film better captures Buddy’s infectious joy and innocence.

“We originally hoped to shoot in Macy’s…the one stipulation was that we could not say that there was a fake Santa in Macy’s.”

Favreau: “We’d originally hoped to shoot in Macy’s. And Macy’s was actually really open to the idea of us shooting there, and even saying that maybe we could participate in the parade. However, the one stipulation was that we could not say that there was a fake Santa in Macy’s. So that’s part of their brand and people go to their Santaland every year, and they didn’t wanna blow it for young kids. Which I get. So, we kept thinking about, what could it be? [When] I grew up there was always Macy’s and Gimbel’s. Of course, Gimbel’s is featured in Miracle on 34th Street, so it’s a bit of an Easter egg for Christmas movie fans.” 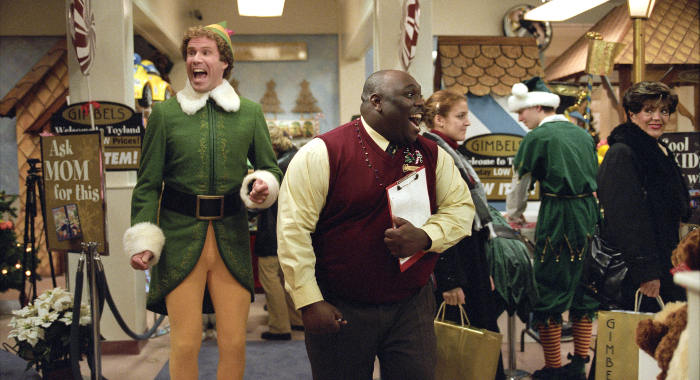 “I know that the first couple takes really took people by surprise, that I would go that big with it.”

Favreau: “I remember the scene in Gimbel’s where Faizon Love makes the announcement that Santa is coming, and he just screams, ‘Santa!’. [Will] just loves to commit. He really knows where the laugh is in the scene. And then the reaction of [Faizon] being the manager, looking, thinking his employee is screaming in his face, is probably one of my favorite moments of the movie.”

Ferrell: “That kind of exclamation of ‘Santa!’ and screaming it, that was just my articulation of Buddy literally taking that piece of news [that Santa is coming] at face value and [thinking] what would be his literal reaction. A man without a country in this strange land finally getting to see someone he knows really well – it would just be the most jubilant reaction ever. I know that the first couple takes really took people by surprise, that I would go that big with it. And all of that, ‘Santa, I know him,’ all of that playing around we did, that was all improvised there.” 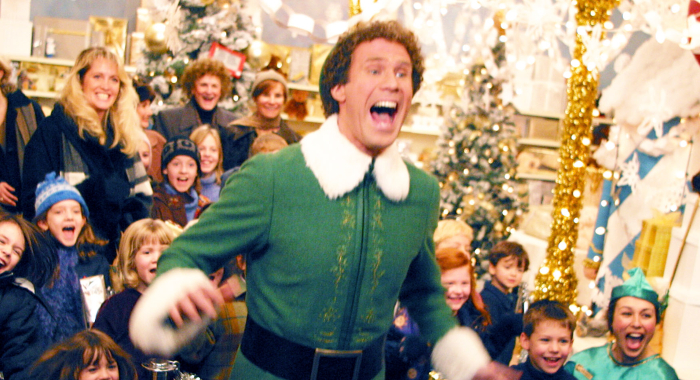 “My biggest job on that film was to sort through all the various takes.”

Favreau: “Will just did lots of different choices for lots of different moments. My biggest job on that film, along with the editor Dan Lebental, was to just sort through all the various takes. We didn’t have a lot of time, it wasn’t a big-budget movie. But there was always room to play and to have fun and try different alts. And then [we had to] string all of the great different performances or improvisations together into a cohesive performance that served the story, while still taking full advantage of all the laughs that he was able to find.”

Ferrell: “It’s funny. James Caan, we were at the premiere, and I took this as a great compliment…he was like, ‘Great job. I thought you were too over the top the whole time.’”

The Impact: A Seasonal Favorite

Go online and you can buy Elf snow globes. And Elf jack-in-the-boxes. And Elf costumes, of course. And many, many Elf storybooks. Meanwhile, Elf: The Musical, which opened on Broadway in 2010 in a testament to just how popular the film had become, is still touring the country. Elf, it’s fair to say, has become a pretty big deal since it premiered in 2003. But you don’t need merchandise and musicals to tell you that – just ask a friend. Or go up to Will Ferrell or Jon Favreau on the street and ask them how frequently people go up to them on the street to talk about the movie? You probably won’t be the first to do so that day. The duo set out to create a seasonal hit with legs, and they hit their mark.

“I can’t let everyone see me cry here at my own movie.”

Ferrell: “[At the L.A. premiere] I knew it was working at that moment where Buddy is in the back of the sleigh and everyone’s singing in Central Park and there’s enough Christmas spirit to get it lifted off, and he’s waving goodbye. I’m like, Oh, I can’t let everyone see me cry here at my own movie. I was like, Oh gosh, this is working on a level that I didn’t anticipate, and that was pretty cool. I remember getting a call from Nora Ephron, because we were just starting the sit down to get to do Bewitched. And during that opening weekend, she was like, ‘You really should enjoy this because this doesn’t happen a lot, where you have a movie that everyone is talking about.’ And she’s like, ‘I hope you enjoy it. Just really.’ So I remember her words, I was like, ‘OK, yeah. You’re right. This is crazy.'” 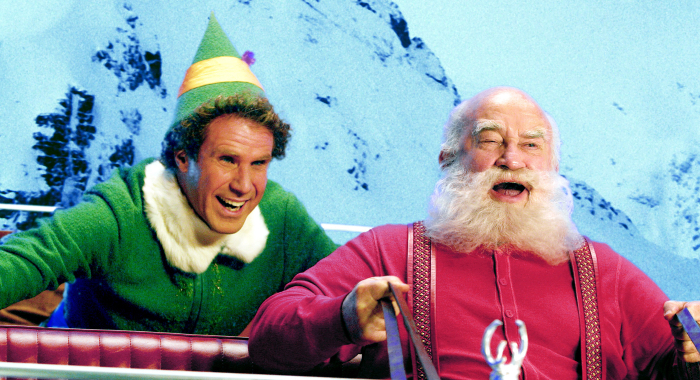 “It wasn’t too long after 9/11, it was filmed in New York, I think it brought some nice energy to us at a challenging time.”

Favreau: “When it came out what we really wanted a movie like that. It wasn’t too long after 9/11, it was filmed in New York, I think it brought some nice energy to us at a time when – if you think back that far – it was a really challenging time and it was nice to bring a nice breath of innocence to the world and especially to the city at that time. I’m really proud of it. If it’s ever in a theater or playing on television, I love to check in on it. And I can tell through social media that it’s something that people have made a tradition of. I’ll see pictures online of people saying, ‘Hey I’m introducing my son or my daughter to this movie for the first time.’ And they’ll post a picture of Elf on television and there’s a little three-year-old sitting there looking up at the screen. And that really makes me happy and it’s the best part of the job.”

Elf was released on November 7, 2003. Buy or rent it at FandangNOW. 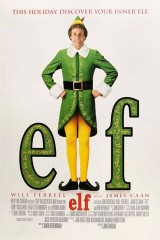 #1
Adjusted Score: 91404%
Critics Consensus: A movie full of Yuletide cheer, Elf is a spirited, good-natured family comedy, and it benefits greatly from Will Ferrell's funny and charming performance as one of Santa's biggest helpers.
Synopsis: Buddy (Will Ferrell) was accidentally transported to the North Pole as a toddler and raised to adulthood among Santa's elves.... [More]
Starring: Will Ferrell, James Caan, Bob Newhart, Edward Asner
Directed By: Jon Favreau