Mindhunter Stars on Diving Too Deep Into Serial Killer Psychology, Hopes for Season 2

None of the stars of Mindhunter really had much knowledge of serial killers before signing on for the Netflix series, which follows a pair of FBI agents who delve into the psychology of serial murderers. The series, from Gone Girl and Zodiac filmmaker David Fincher and released earlier this month, is set in the late ’70s and chronicles the early years of the FBI’s Behavioral Science Unit.

Holt McCallany, who plays FBI behavioral science specialist Bill Tench, told a gathering of journalists this week that his main touchstone in preparing for his role was simply living in New York City at the time of the Son of Sam murders.

“I did have a recollection of the way that the hysteria gripped New York, and people were afraid to be sitting in their cars and stuff like that,” he said, but he mainly learned about the real-life murderers profiled on the show after he began filming Mindhunter.

Posted by MINDHUNTER on Saturday, October 14, 2017

“There is an endless amount of research to do, because volumes have been written about these guys. You start talking about Charles Manson and the Tate-Labianca killings and stuff like this — there’s so much research to do,” McCallany said.

“So for me, I found it one of the most challenging things, because you want to understand who Ed Kemper was,” McCallany continued. “He was the Co-Ed Killer. What did he do? He killed these girls in Santa Cruz. What is his background? That he killed his grandparents. And then you are on to Jerry Brudos and then you are on to Richard Speck and you’re on to Monte Rissell. Each one of them are fascinating characters, but you have to familiarize yourself with all of them and so it was a challenge.” 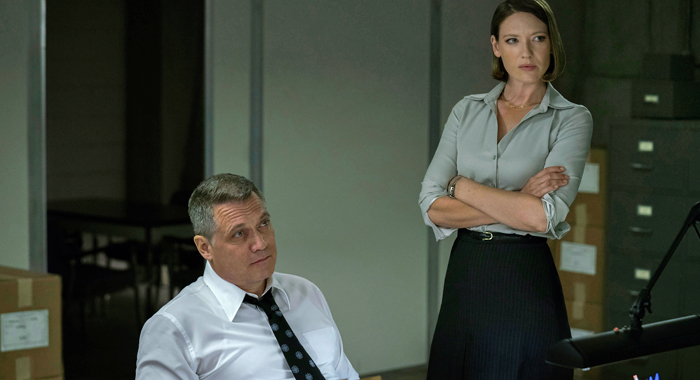 Then again, there’s a fine line between researching for a role and spiraling into a dark place. Anna Torv, who plays Dr. Wendy Carr, said she had to force herself to stop at a certain point.

“I read a heap in the beginning and then I just went, ‘I’m not going to do this anymore.’ I was scared, legitimately,” Torv said. “I just shut the books and I went, now I’m going to look into the personality disorders, and I’m going start looking at sociopathy and psychopathy and not the real stuff.”

I can't let these guys rub off on me.

Mindhunter is based on the book Mind Hunter: Inside the FBI’s Elite Serial Crime Unit by John E. Douglas, one of the first criminal profilers and the inspiration for Jonathan Groff’s Holden Ford. Douglas helped Groff and McCallany prepare for their roles, and even sent them a nice note after the show’s debut.

“He loves the show, and I think he’s very grateful to David [Fincher] for doing it,” McCallany says. “He’s a very gracious guy. He’s a very prolific writer; he’s written 15 books. He’s got an encyclopedia of knowledge of the subject. He’s got more experience than anybody in the world. He’s kind of the legendary FBI agent criminal profiler. He’s just always very forthcoming, getting it right to me, asking me questions, ‘Anything I can do to be helpful. If I can tell you about cases, or tell you about terminology, or just procedural etiquette or whatever it may be.’ He’s a good guy, he’s been a good resource for us.”

Toward the end of the season, Ford, Tench, and Carr begin to crack under pressure as they began to solve cases. And while it was hard for the actors on set, Groff says he knows their experience doesn’t even compare to the struggles real-life profilers face.

“John Douglas talks a lot in his book about the emotional and physical toll that it had meeting with the serial killers and the victims and the victims’ families. We’re fictionalizing their stories, but I can’t even imagine what that’s actually like to be on the ground experiencing that in real life,” he says. “We’re actors playing parts and the serial killers are actors playing parts and there’s craft service around the corner, and Gigi behind the couch, ready to touch you up between takes. So, it’s a little bit of a different scenario.” 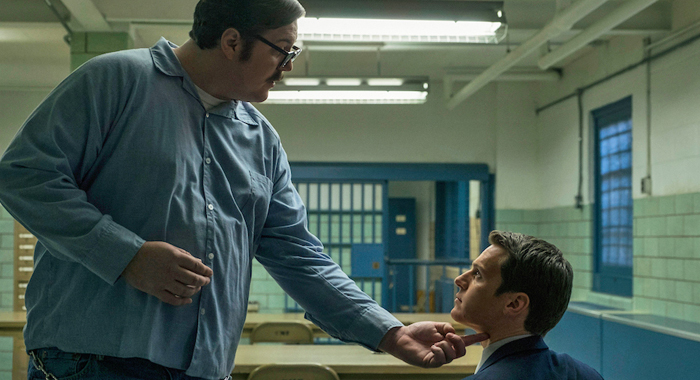 While Netflix has yet to officially greenlight a second season of the series, Groff is excited about the possibilities of what it will explore.

“I think about The Crown, how everything in The Crown already happened, and it’s historical fiction,” he says. “You can read the Mindhunter book and John Douglas’ books. Granted our characters are based on real people, so the personal lives are different. But the cases and everything that we do is real. So, it’s interesting to me how intriguing David makes these cases that you could go so easily to Wikipedia and read about exactly what happened and how it all went down. But you kind of want to see the David Fincher version of how it all went down, instead of just reading Wikipedia. …I mean, I would watch it for what his point of view on all of it, which I don’t know what that would be.”

What happens to these men is normal, but the way they process it is not.

Posted by MINDHUNTER on Wednesday, October 18, 2017

Plus, there’s plenty to explore with Ford’s major meltdown.

“I think one of the great things about the show, and sort of the balls that it takes to really be a writer in television is that to really end on something where it’s hard to imagine where you pick up and go from there,” he says. “A lot of people I think like to create safer narratives where it makes more logical sense that you would end something here, but to kind of blow it all up in the way that they did at the end of the show I think is really ballsy. I’ll be so excited and interested … to see how they pick up the pieces and move forward.”

Mindhunter is available to stream on Netflix now.