Men In Black Reboots As A Trilogy Without Will Smith, Sicario Gets a Sequel, and More Movie News

New roles for Benedict Cumberbatch and Jake Gyllenhaal, Emma Stone and Kate Winslet, an action movie about George Washington, and more Ghostbusters sign on for the reboot.

This week’s Ketchup covers ten stories from the arena of film development news. Included in the mix this week are headlines for such movies as the Ghostbusters reboot, The Girl on the Train, and Sicario 2; and new roles for Benedict Cumberbatch and Jake Gyllenhaal. 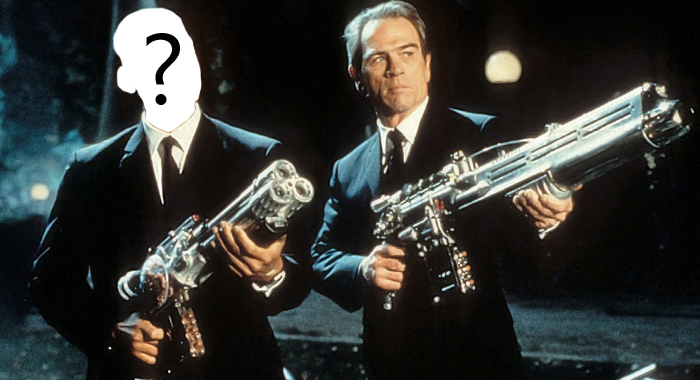 Often times, stories about film development as you read them in columns like this one get their start as fully fleshed out stories in trades like Variety, or these days, on blogs like Deadline. There are other situations, however, where the “story” itself can be expressed in very few words, and then from there, writers can (and do) feel free to extrapolate and speculate at great length. Such was arguably the case this week when an interview with producers (and spouses) Walter Parkes and Laurie MacDonald ended with two brief statements about the future of Men in Black. Those ten words tell us that Will Smith is likely done (at least as the star) with his biggest franchise, and that Men in Black will be rebooted as a new trilogy of movies. This update also doesn’t conflict with the news earlier this year that Sony Pictures is considering connecting two of their franchises with the third Jonah Hill/Channing Tatum movie that we could just call 23 Jump Street.  (Though it doesn’t actually go all the way and confirm that those plans will indeed happen; that probably would have required at least three more words.)

In July, we first heard that next year’s reboot of Ghostbusters (7/15/16) would feature an appearance by one of the stars of the original film, when Dan Aykroyd confirmed that he had filmed a scene with Kristen Wiig.  Then, about a month later, Bill Murray also confirmed that he had filmed a “cameo” appearance in the reboot. Neither Aykroyd nor Murray are playing their original characters (Ray Stantz and Peter Venkman), and indeed, Dan Aykroyd was reportedly cast as a skeptic of the paranormal. This week, two more casting stories doubled the number of original stars returning, starting with the news that Ernie Hudson had also filmed at least one scene (on what was also the last day of principal photography). Hudson’s participation might be the most surprising, since he created something of an online stir several months ago, with the question, “If it has nothing to do with the other two movies, and it’s all female, then why are you calling it Ghostbusters?” Annie Potts, who played the Ghostbusters’ receptionist Janice, also was seen in Boston for filming recently.  Finally, director Paul Feig took to Twitter this morning to announce that Sigourney Weaver has also agreed to be in the reboot. With the passing in 2014 of Harold Ramis, that now leaves only Rick Moranis (who played Louis) as the one of the original seven stars who hasn’t yet been mentioned as appearing in the Ghostbusters reboot.

2. SICARIO ALREADY GETTING A SEQUEL, A WEEK BEFORE WIDE RELEASE

The drug war movie Sicario has only been in limited release a week, and won’t get its wide release until October 2nd. The film has had, however, a high per-screen box office average (the year’s highest to date), and is already being discussed by pundits as a strong contender in this year’s awards season. Perhaps for these reasons, Lionsgate has already begun development on a Sicario sequel, having hired the film’s screenwriter to start work. As explained in the linked article (which may reveal or suggest spoilers, be warned), the focus of the second movie will be on Benicio Del Toro’s “mysterious hitman” character. It is not yet known if director Denis Villeneuve (Prisoners, Enemy) would return for the Sicario sequel.

3. CUMBERBATCH AND GYLLENHAAL TO WAGE THE CURRENT WAR

In the 72 years since his death, something of a cult of personality has built up around the legacy of inventor Nicola Tesla. A frequent target of Tesla’s acolytes is American inventor (and former Tesla employer) Thomas Alva Edison, with much of that debate stemming from the late 19th century competition over which system would be used in widespread transmission of electricity. Tesla, however, actually sold his patent to an entrepeneur named George Westinghouse, so the “The War of Currents” was actually waged between Edison and Westinghouse, not Tesla himself. That little history lesson is important to explain this week’s news that Benedict Cumberbatch and Jake Gyllenhaal have been cast by the Weinstein Company in The Current War. Cumberbatch will play Thomas Edison, and Gyllenhaal will play George Westinghouse. The Current War will be directed by Alfonso Gomez-Rejon, whose first two films as director were last year’s remake of The Town That Dreaded Sundown, and this year’s Me and Earl and the Dying Girl. George Westinghouse was something of a “portly” gentleman, and it’s not yet known if Jake Gyllenhaal will be bulking up on a diet of carbs to match Westinghouse’s look (it might just be easier to sport Westinghouse’s awesome ‘stache).

4. CAPTAIN AMERICA AND THE JOKER BOARD THE GIRL ON THE TRAIN

Captain America and the Joker may come from opposite sides of the DC/Marvel superhero movie competition, but this week, the two actors playing those characters — Chris Evans and Jared Leto — joined the same movie in similar roles.  Now that the three female leads in the adaptation of the popular novel The Girl on the Train are cast, the production is moving on to two husband characters. If their deals come through, Chris Evans would play the husband of the character played by Rebecca Ferguson (Mission: Impossible – Rogue Nation), and the ex-husband of Emily Blunt’s title character. Likewise, Jared Leto would play the husband of the character played by Haley Bennett (The Equalizer). The Girl on the Train will be directed by Tate Taylor (The Help, Get On Up) for DreamWorks Pictures.

5. IS EMMA STONE OR KATE WINSLET THE FAVOURITE?

Although it does not yet have a release date in the States, Greek director Yorgos Lanthimos’ English language debut, The Lobster, has been a hit on the international festival circuit, most notably winning the Jury Prize at this year’s Cannes Film Festival. This week, even as the US waits to actually see The Lobster, Lanthimos’ next film already started casting up. Kate Winslet, Emma Stone, and Olivia Colman (TV’s Broadchurch) are all in talks to costar in Yorgos Lanthimos’ next film, The Favourite. The premise is described as following the “political machinations behind the scenes during the reign of Queen Anne, the last monarch of the House of Stuarts” during the years 1702 to 1707. If the deals go through, Olivia Colman would play Queen Anne, Winslet would play a close confidante of the Queen, and Stone would play a distant, poor cousin of Winslet’s character who gains a court position serving the Queen.

The idea of a movie based on the 1973 “Battle of the Sexes” tennis matches between male player Bobby Riggs and female player Billie Jean King has been bouncing around Hollywood for several years now. In that time, the delay has allowed three different projects to emerge and compete to be the one that beats the other two to actual production and eventual release. Two of them are a HBO/Playtone movie called Proof (starring Elizabeth Banks and Paul Giamatti) and another called Match Maker, which has Will Ferrell attached to play Bobby Riggs. The project that appears it may be getting closest to happening is Fox Searchlight’s Battle of the Sexes. Steve Carell has long been attached to star as Bobby Riggs, but Emma Stone recently departed from starring as Billy Jean King.  That casting conundrum was solved this week with the news that Brie Larson (Short Term 12, Trainwreck) is now in talks to replace Emma Stone. If the deal works out, Battle of the Sexes will be directed by the team of Jonathan Dayton and Valerie Faris, who are best known for the indie comedy hits Little Miss Sunshine and Ruby Sparks.

7. RACHEL WEISZ TO STAR AS MY COUSIN RACHEL

It’s obviously more common for actors and actresses with common names like “John” or “Tom” or “Jennifer,” but for most, it’s rare that they land a role where the character has the same name they do. (Although sometimes the character name is chosen based on the name of the actor playing them.)  In the case of Rachel Weisz, who knows, perhaps she’s always dreamed of starring in a movie based on Daphne Du Maurier’s classic 1951 novel My Cousin Rachel. Well, if that were true, she would be in luck, because she is now in talks with Fox Searchlight to play the title character in a new adaptation of My Cousin Rachel. The novel was first adapted as a 1952 film starring Olivia de Havilland and Richard Burton. This new adaptation will be directed by Roger Michell (Le Week-End, Notting Hill, Hyde Park on the Hudson). Rachel Weisz’ Rachel is a woman suspected of murdering a cousin by one of her other cousins. There sure is a lot of double wordplay in this story.

8. GEORGE WASHINGTON GETS ACTION MOVIE TREATMENT IN THE VIRGINIAN

Although Hollywood does experiment with the era every once in a while (Last of the Mohicans, The Patriot), 18th century America is represented a lot less in modern movies than, say, the 19th century. You might think such movies would be much more common, considering that the late 1700s is the setting of the Revolutionary War, and the founding of the United States. This week brought news of at least one new movie attempting to correct that oversight. In a mid-six-figures deal, New Line Cinema has acquired the rights to a script called The Virginian about George Washington when he was a young colonial soldier. The Virginian is described as an action thriller about how a “down-and-out, young George Washington — desperate to join the British Army — accepts a dangerous mission to conquer a French fort and save the American colonies.” New Line’s acquisition of The Virginian may spark a race to production with another George Washington movie called The General, which is reportedly more of a traditional biopic about Washington’s later life. The Virginian was written by Michael Gunn, who has worked as a story editor on Aaron Sorkin’s HBO series, The Newsroom.

9. JORDAN PEELE TO DIRECT HORROR COMEDY GET OUT

In his 1983 stand up comedy film Delirious, Eddie Murphy riffed on The Amityville Horror, mocking the spooky whisper “GET OUT!” as something that would make him leave any house (NSFW clip here), regardless of how nice it was (“too bad we can’t stay, baby!”).  Thirty years later, that refrain is now being used as the title of a horror comedy  to be written and directed by Jordan Peele, best known as one half of the comedy duo Key & Peele, along with Keegan-Michael Key, who will costar with Peele in the comedy Keanu (4/22/16). Get Out is about “a young African-American man who visits his Caucasian girlfriend’s family estate.” Jordan Peele is writing and will make his feature film directorial debut, but is not expected to star as the lead character (though he may take a supporting role). Get Out will be produced by Blumhouse Productions, the company behind such horror films as Insidious, the Paranormal Activity franchise, and next year’s Amityville: The Awakening.

Rotten Ideas of The Week

All three of the movies opening in wide release this week might have Rotten Tomatometer scores, but here in the Weekly Ketchup, we’re pleased to announce… no major “Rotten Idea” stories this week!