The Long, Strange Trip of Marvel’s Inhumans — From Guest Spots to Headlining

How Black Bolt, Medusa, Lockjaw, and more came to be the super-powered central figures now appearing in the ABC live-action series, despite rarely starring in their own comic book. 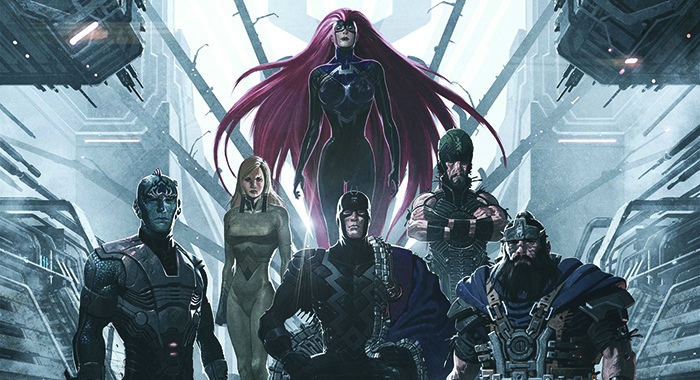 For decades, Marvel’s Inhumans were guest characters — a nice spice in the ongoing storylines of other titles like the Fantastic Four or the Avengers. But their constant presence as guest characters left an impression on casual and hardcore Marvel fans alike. In fact, casual fans would be surprised to learn that it is only in the last decade that the characters have enjoyed a dedicated group of comic books under their own name. How did this happen? And how does it inform new ABC series Marvel’s Inhumans? Let’s take a look. 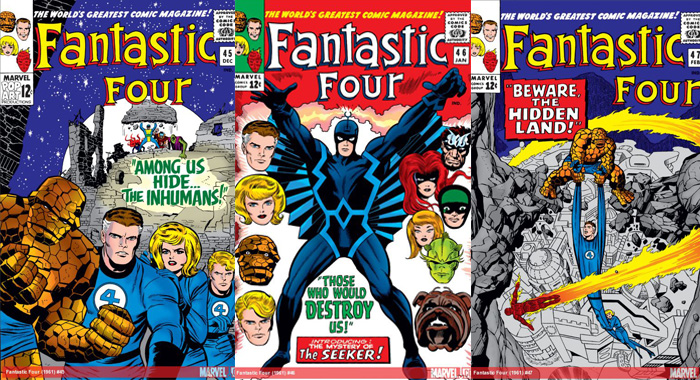 Though Medusa was introduced a year earlier as part of the villainous Frightful Four – and Gorgon made a teasing debut in issue #44 — the Inhumans’ proper debut was during the seismic 25-issue run of The Fantastic Four, which also saw the debut of characters like Galactus, The Silver Surfer, and Black Panther. But in this first story, we get so many key details of the Inhumans and their royal family: Black Bolt (played by Anson Mount in the series) as a mute leader, Maximus (Iwan Rheon on the show) as his frustrated and powerless brother, and the Inhumans’ exile from Attilan. That last element plays directly into the premise of the ABC television series, which, despite a dismal 4% Tomatometer score, remains a top TV page on Rotten Tomatoes and was No. 2 on the list of most anticipated new series in our 2017 Fall TV Survey.

As with the other concepts and characters Jack Kirby and Stan Lee introduced at the time, they are dynamite. Kirby’s art extends them so much power. Their abilities are varied and interesting to look at. It’s everything you want a debut to be, even if you have no intention to spin the characters into their own title. And, as it happens, Lee had no intention to do so. Instead, the characters were fleshed out during an ongoing backup feature in Thor from 1967 to 1968, detailing much of Attilan society, their relationship to the alien Kree race, and their use of Terrigen Mist to reveal Inhumans’ powers.

And it is their status as a divergent human culture more than Terrigen that separates them from Marvel’s mutant family. But that distinct concept served Agents of S.H.I.E.L.D. well and drives part of the conflict on Inhumans. In fact, Maxmius makes a very convincing speech about both aspects of Inhuman society presenting increasing threats to Attilan in the early minutes of the pilot episode. 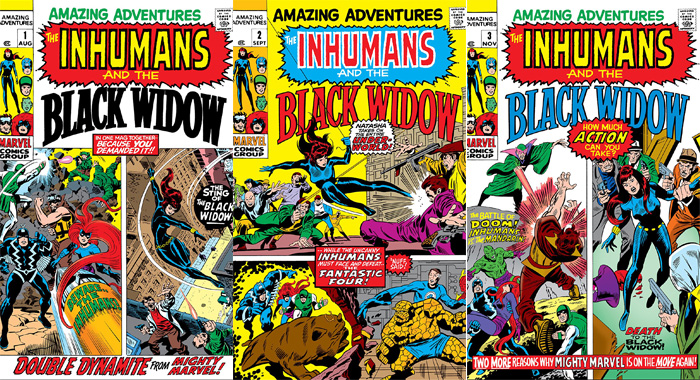 After their run in Thor – and a fight with the Silver Surfer — Kirby returned to the characters in the pages of 1970’s Amazing Adventures. He would move on after six issues, while the Inhumans themselves left after the tenth. They finally received their own self-titled series in 1975 thanks to writer Doug Moench. This survived for two years, but only released 12 issues. The characters scattered into various guest spots in other books until 1988, when Marvel published an Inhumans graphic novel by Ann Nocenti and Bret Blevins. She would take royal family members Gorgon and Karnak with her to Daredevil, where they became supporting castmembers for a year in 1989. Sadly, it would be another 10 years before either character would be part of an Inhumans title. 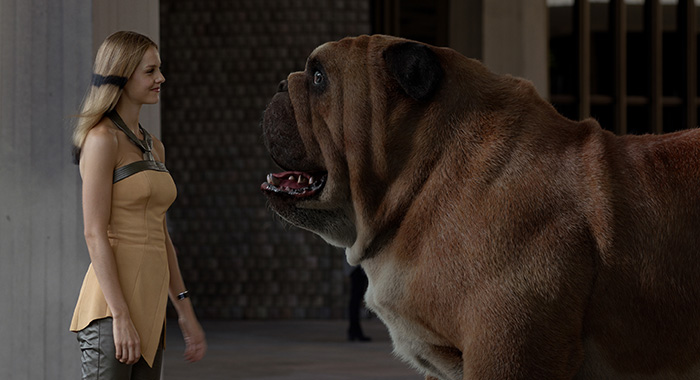 Besides Gorgon and Karnak setting up shop in Hell’s Kitchen, a number of other Inhumans became fixtures in other titles. Medusa, as stated above, was a member of the Frightful Four — a group of villains opposed to the Fantastic Four – in the year prior to the Inhumans’ introduction. As it was eventually explained, Maximus’ first coup attempt left her with amnesia and easily susceptible to the suggestion of The Wizard, leader of the Frightful Four. Following the initial adventure, she continued to wander the Earth; eventually joining the Fantastic Four when Sue Storm took a leave of absence. She joined Black Bolt as Queen of Attilan in Fantastic Four #83. Medusa (Serinda Swan) has the most success acclimating to Earth in the TV series’ pilot episodes, a tribute to her days as a comic-book adventurer. Whether or not this means she may turn to a life of crime is anyone’s guess.

Medusa’s sister Crystal would also continue to be a member of the Fantastic Four supporting cast. Sometimes as a love interest for Johnny Storm, and other times as a competent member of the group’s extended network. Crystal was also the first Inhuman to join the team proper during Sue’s first maternity leave. From the mid-1970s to 1990, Crystal was associated with the X-Men and Avengers titles via her troubled marriage to Quicksilver, the formerly villainous mutant who appeared in both an X-Men film (Days of Future Past) and an Avengers film (Age of Ultron) in the same summer. Crystal would eventually become an Avenger herself in 1991 only to return to Attilan by the century’s end. Curious, then, that she would be the only member of the family not to escape to Earth in the television series. Maybe she’ll show up on Agents of S.H.I.E.L.D. one day to collect another team affiliation.

Inhuman characters continue to find their way into other titles, like teleporting dog Lockjaw’s recurring role in the recent Ms. Marvel title. 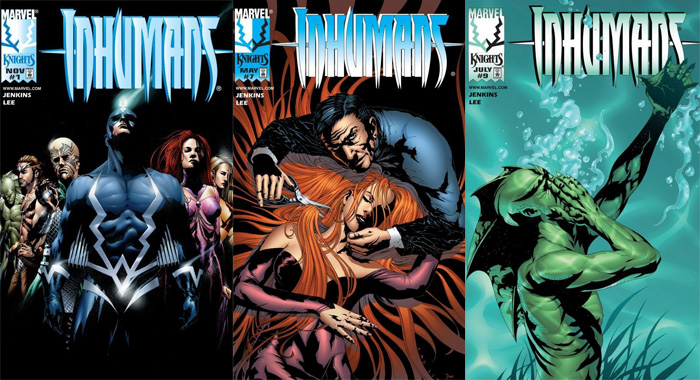 After all those years of wandering, the Inhumans were redefined by writer Paul Jenkins and artist Jae Lee in 1998. The 12-issue Inhumans miniseries – noted in publication history as the third volume of the Inhumans series – took a serious look at the characters and their family dynamics. Black Bolt wore the crown upon a heavy brow and ached to speak. Maximus’ frustrations were given relatable elements, making his concerns not so easily dismissed as mere villainy. Lee’s art also gave the characters a fresh visual perspective, earning the title top industry awards. It also, in its way, is the major source material in the ABC television series. If not in execution — fingers are pointing at showrunner Scott Buck, who was also responsible for Netflix disappointment Marvel’s Iron Fist, which managed only a 17% Tomatometer score — then certainly in concept as it presents similar political and familial conflicts. There are departures, of course. Karnak, for example, is presented as a much less genial individual in that story than he is in the early moments of the Inhumans television series as played by Ken Leung.

In 2000, writers Carlos Pacheco and Rafael Marín and artist José Ladrönn would begin a fourth volume of Inhumans. This one was shifted away from the Royal Family and focused on new Inhumans characters; a tactic resembling the concepts use on Agents of S.H.I.E.L.D. 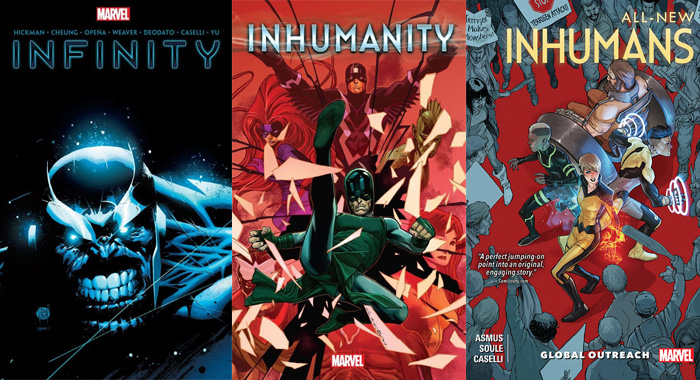 The characters continued to appear in other titles and major event story lines until 2013, when they took center stage in two consecutive event stories, Infinity and Inhumanity. The first, written by Jonathan Hickman, saw Black Bolt confront unreasonable demands from Thanos. In lieu of giving in, Black Bolt evacuated Attilan and destroyed it. The resulting destruction activated Maximus’s Terrigenesis Bomb, unleashing Terrigen Mist upon the Earth and revealing thousands of new Inhumans.

In Inhumanity, written by Matt Fraction and Charles Soule, the remaining members of the royal family faced trying to help the so-called “NuHumans” deal with their newfound power and facing the fallout from their existence becoming known to the world. In the wake of Inhumanity, two titles began in order to keep some sense of things. Uncanny Inhumans continued the tale of the royal family, while All-New Inhumans focused on newer characters born out of the Terrigen Bomb and their uneasy lives across the planet.

If the Terrigenesis Bomb and resulting Inhumans resemble Marvel’s Merry Mutants to you, that’s no accident. As Marvel found itself as a film rival to 20th Century Fox and its X-Men franchise in the 21st century, there was an attempt to position the Inhumans as a replacement concept in the Marvel Cinematic Universe. While still telling their own stories, Infinity, Inhumanity, and the subsequent titles were also incubators for new film-ready characters, some of whom ultimately appeared on Agents of S.H.I.E.L.D. 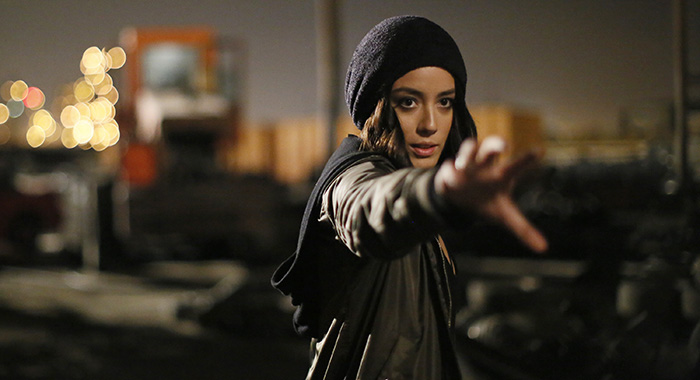 At that moment, though, the intent was to save the royal family for a feature film and, perhaps, establish the Inhumans as the MCU equivalent of the X-Men. The attempt was somewhat successful on S.H.I.E.L.D. with Daisy Johnson (Chloe Bennet) revealed as an Inhuman in the show’s second season. The series also portrayed the group as hunted and persecuted like Fox’s mutants.

But now the royal family is, at long last, joining the fray. While Inhumans acknowledges the situation on Earth after the second season of S.H.I.E.L.D., it still has a lot of its world-building to do. The situation between these cousins is complex and it seems Black Bolt and Medusa will have to fix their own house before they can wander any further into the MCU. Of course, if their comic book counterparts are any indication, they’ll be wandering for a long time — even if they have to return to their guest character status again.

Marvel’s Inhumans premieres on ABC on Friday, September 29 at 8 p.m.; the comic book and graphic novel titles mentioned here are available for purchase through the Marvel Digital Comics Shop.