Marvel Stars and Other Celebs React To Stan Lee's Death

The comic-book titan's death inspired an outpouring of grief – and celebrations of his legacy – on social media from Robert Downey Jr., Hugh Jackman, Ryan Reynolds and more.

Few people have shaped modern moviegoing and TV-watching quite so much as Marvel’s Stan Lee. The characters he created and co-created – web-slingers, cocky men in iron suits, mutants on a mission – have propelled some of the biggest films, series, and franchises of our time. So it was no surprise that the news of Lee’s death spread quickly on social media on Monday, and some of the world’s biggest stars – many of whom had their biggest roles playing heroes he created – paid tribute to the comic-book titan. Among them are MCU and Marvel stars like Hugh Jackman, Letitia Wright, and Robert Downey Jr. Here are some of the most moving star reactions to Stan Lee’s death.

No one has had more of an impact on my career and everything we do at Marvel Studios than Stan Lee. Stan leaves an extraordinary legacy that will outlive us all. Our thoughts are with his daughter, his family, and his millions of fans. #ThankYouStan #Excelsior!

I owe it all to you,,, Rest In Peace Stan… #MCU #Excelsior #legend #rip #stanlee #TeamStark

There will never be another Stan Lee. For decades he provided both young and old with adventure, escape, comfort, confidence, inspiration, strength, friendship and joy. He exuded love and kindness and will leave an indelible mark on so, so, so many lives. Excelsior!!

Thanks for everything, Stan.

Thank you great legend. You will be missed. I wouldn’t be here without you. ❤️??❤️

Overwhelmed with love and gratitude for the late, great hero, Stan Lee. Rest In Paradise. Thank you for your imagination, creativity, tenacity, inspiration and love!!! https://t.co/4WqHCtDXE1

We’ve lost a creative genius. Stan Lee was a pioneering force in the superhero universe. I’m proud to have been a small part of his legacy and …. to have helped bring one of his characters to life. #StanLee #Wolverine pic.twitter.com/iOdefi7iYz

Thank you for filling our childhoods with such joy. You will be dearly, dearly missed… pic.twitter.com/Qt2sZqaNlc

How many millions of us are indebted to this guy, none more so than me. The father of Marvel has made so many people so incredibly happy. What a life and what a thing to have achieved. Rest in peace Stan

Stan Lee, RIP. Thanks for inspiring so many of us to pick up a pen or pencil and put your dreams onto paper. Excelsior! pic.twitter.com/L33eTjUQdI

Stan…more than a master of stories, you always seemed like a master of living. I will look to you for inspiration for the rest of my life. You live on. xoxo Your Wasp
.
#liveon #StanLee pic.twitter.com/JRA2aRM3bG

With the greatest of respect ❤️

“You know, I guess one person can make a difference” pic.twitter.com/aaY6RALtNz

Today we lost one of the greats. @TheRealStanLee, you were a inspiration and superhero to us all. Thank you for contributing so much- and giving us all something to aspire to! ?
#ripstanlee pic.twitter.com/GzFhwgU0WA

Stan Lee created a universe where, if a character was beloved enough, they could never really die.

Thanks for so much of my life. You’ll never not be in it.

Thank you @TheRealStanLee for the escape from this world & great joy inhabiting the ones you created!! You made so many believe in the good, the heroic, the villainous, the exciting, most of all, you were giving & gracious to us all. RIP

RIP #StanLee – thank you for sharing your incredible vision with us. We are eternally grateful to you and would not be the same without it. I am so honored to have played a part in your world, and will forever look back on the opportunity with love. #XMen #Storm pic.twitter.com/pKfxHMUKmP

You were a man before your time… now it feels like you are gone before your time. RIP Stan the Man… thanks for the laughs and words of support. It’s a honor to live in your universe! #MarvelKnight pic.twitter.com/1TXdPqUB3x

Thanks for everything Stan Lee! What a life, so well lived. I consider myself extraordinarily lucky to have gotten to meet you and to have played in the world you created.
?♥️ pic.twitter.com/ryUjG7PL8D

Sad, sad day. Rest In Power, Uncle Stan. You have made the world a better place through the power of modern mythology and your love of this messy business of being human… pic.twitter.com/x6yZ6ClNSX

Stan Lee was as extraordinary as the characters he created. A super hero in his own right to Marvel fans around the world, Stan had the power to inspire, to entertain, and to connect. The scale of his imagination was only exceeded by the size of his heart. .@TheRealStanLee pic.twitter.com/u2Dux0oGLu 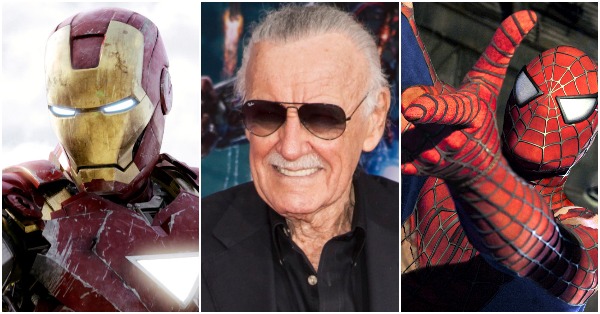