As he pushed his characters from page to screen – and perfected the art of the creator cameo – Stan Lee shifted the foundations of Hollywood. 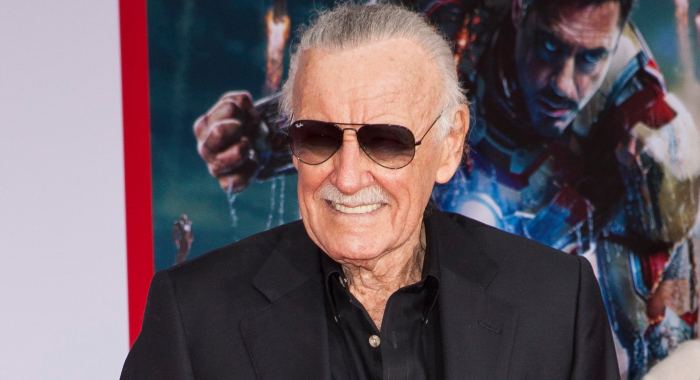 As the story often goes, Stan Lee, who passed away early Monday morning, was tired of working at Martin Goodman’s comic book company. His wife, Joan, suggested he pitch one last title and do it the way he felt a comic story should be told. Alongside genius co-creator Jack Kirby, his “last” comic book was The Fantastic Four, which lead to an ongoing series of new titles and ushered in the Marvel Age of comics.

But Lee, who always hoped to leave comics behind to write the Great American Novel, also had bigger ambitious for characters he co-created, including The Fantastic Four, Thor, Black Panther, and The X-Men. Early on, he saw that they had the potential to transfer to other media. Here’s just a few way he helped comic books in transitioning to film and television.

He Worked On The 1960s Marvel Super Heroes Cartoon

While still writing titles and acting as an editor and art director for Marvel in 1966, Lee also worked on Grantray-Lawrence Animation’s The Marvel Super Heroes animated series. While Goodman negotiated the deal with Grantray-Lawrence and the company chose which Marvel characters would be featured, Lee nonetheless worked on the series, helping to reform stories written by him and people like Kirby, Spider-Man co-creator Steve Ditko, and others.

The series focused on Captain America, The Incredible Hulk, Iron Man, Thor, and Namor. Each starred in their own sub-series ripped from the pages of Marvel’s recent comic books. The animation generally consisted of photocopied images pulled directly from recent issues of the various characters’ comics — or even early issues of The Avengers — with the images manipulated to create the illusion of animation and limited lip-sync. But despite its technical limitations, the series expanded Marvel’s reach into homes all over the country, creating life-long fans thanks to memorable theme songs for Thor, Captain America, and Iron Man. In interviews, Lee would admit he did not write the lyrics, but always wished he could claim those catchy tunes for himself.

While not directly involved in the 1967 Hanna-Barbera Fantastic Four animated series, Lee’s influence could still be felt thanks to the story material adapted by the producers. Episodes featured key villains like The Mole Man and Galactus, while Dr. Doom’s origin received an episode-long origin story. The Skrulls and the Silver Surfer also made appearances and many of the stories were based on the early Lee and Kirby issues of Fantastic Four even as they were redesigned by Hanna-Barbera and comics legend Alex Toth.

The series also led to the X-Men’s first television appearance when The Marvel Super Heroes adapted Fantastic Four #6, but substituted the Merry Mutants — referred to as “the Allies for Peace” — in for the FF, whose rights were already in the hands of Hanna-Barbera. Nowadays, rights confusion over characters is a well-known issue in the world of comics-to-screen adaptations, but this may be the first instance of comic-book characters disappearing from a television adaptation of one of their own stories.

The 1970s: The Incredible Hulk, Spider-Man, and Dr. Strange Come to TV

In 1972, Lee became the publisher of Marvel Comics and largely left writing and creating to a new generation of writers, artists, and editors. And while he continued to have a hand in some creative aspects of the business – like the daily Spider-Man comic strip – Lee found himself shepherding the Marvel heroes through Hollywood as the characters began to emerge in the uncharted realm of live action. Before long, CBS debuted The Incredible Hulk. 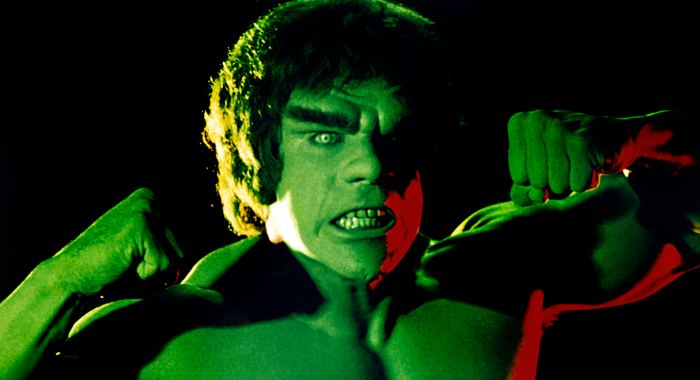 The 1977 series, starring Bill Bixby as Dr. David Bruce Banner, was developed by Kenneth Johnson and followed the format of ABC’s hit series The Fugitive. Each week, Banner would move into a new town and involve himself in local affairs until the Hulk explosively assisted Banner’s new friends. Sadly, word of the creature’s appearance would reach an investigative reporter hunting the Hulk, forcing Banner to look for peace somewhere else. The Incredible Hulk ran for five seasons.

At nearly the same time, Lee sold CBS the rights to make a live-action version of The Amazing Spider-Man. Populating his world with new characters – J. Jonah Jameson was the only carryover in the regular cast – the show was not as successful as The Incredible Hulk, leading CBS to air it in a strange, inconsistent schedule. The two produced seasons amounted to only 13 episodes before the network pulled the plug.

Nonetheless, the network soldiered on with a Dr. Strange pilot and two Captain America TV movies staring Reb Brown. Soon, Lee found himself spending more time in Los Angeles than in New York. In 1981, he and his wife finally moved to Los Angeles intent on making Marvel Productions a mover and shaker in film and television. Successes would include Marvel’s work on The Transformers and G.I. Joe. But after a handful of Incredible Hulk TV movies in the 1980s, television shows based on Marvel characters were few and far between. While Marvel regained a foothold in children’s animation through the 1990s, it would not be until 2013’s Agents of S.H.I.E.L.D. that a Marvel live-action series would be a success.

Lee’s Characters Come to Dominate the Box Office, The MCU Is Born

Meanwhile, on film, characters co-created by Lee grew to be a box office force in the early part of the 21st century. It all begins with 2000’s X-Men, which featured Lee and Kirby characters like Cyclops, Professor X, Magneto, and Jean Grey. Soon after, Lee and Ditko’s Spider-Man would star in his own film courtesy of director Sam Raimi. 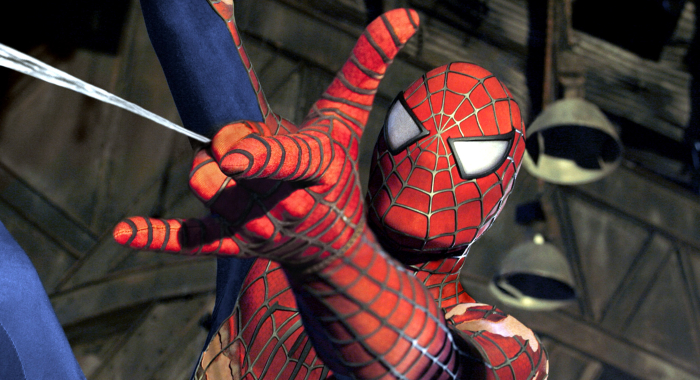 But behind the scenes, Marvel was becoming less satisfied with their financial participation in films produced by 20th Century Fox and Sony. These films, based on the company’s most popular characters, inspired many of Marvel’s executives to try their hand at producing films on their own. With the X-Men, The Fantastic Four, Spider-Man, Blade, Daredevil, and a few others unavailable, the newly formed Marvel Studios looked closer at Lee and Kirby characters like Iron Man and Thor for inspiration.

They also identified another key aspect of Lee’s writing to create a unique momentum with their films. From The Fantastic Four on, the Marvel Comics Universe was a (mostly) cohesive world. Most of the new superheroes Lee and Kirby created were based in New York and crossed over into each other’s titles. The concept may have been borrowed from DC Comics’ Golden Age Justice Society of America, but Lee, Kirby, Ditko, and others made their world feel alive and dynamic with the Fantastic Four guest starring in The Amazing Spider-Man and vice-versa. Soon enough, Iron Man, Thor, the Hulk, Ant-Man. and the Wasp would form their own super team and revive Captain America to join their crew.

Many years later, Marvel Studios would choose to adopt that crossover energy and lead to an Avengers of their own. As in comics, the pieces were always there to make it happen on film, but Lee’s efforts helped to point the way.

And, of course, Stan Lee will leave a mark behind thanks to his penchant for making brief appearances in Marvel movies. It began innocuously enough in the 1989 TV movie The Trial of the Incredible Hulk and in some of the animated series, but that foundation led to his on-screen appearance in X-Men. He also appeared as a mail man in the first Fantastic Four film, receiving speaking lines. With his iconic look and distinctive voice, he would appear in all of the Marvel Studios films, as well as projects featuring characters he did not create, like Deadpool, and even make a cameo appearance in Teen Titans GO! to the Movies, poking fun at his hat-tip presence in comic book movies. 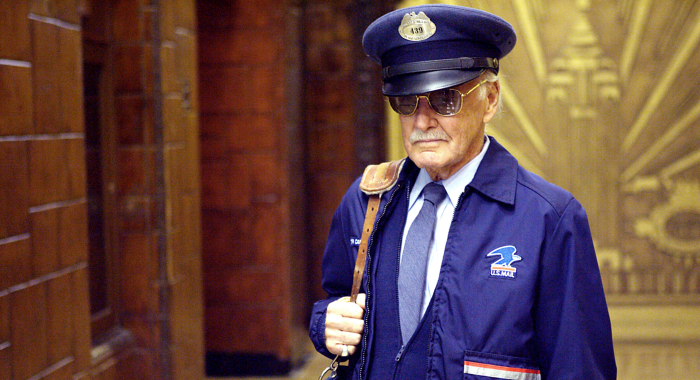 He also played himself in Kevin Smith’s 1995 film Mallrats, in which he gave main character Brodie (Jason Lee) some sage wisdom even as Brodie kept asking him about the Hulk’s junk.

If nothing else, Lee was always a sport on film, playing strip club MCs, bus drivers, and concerned citizens helping people out of harm’s way. He got in the characters’ ways sometimes, or even reminded them that one person can make a difference. As with the universe-building he indulged in during the 1960s, the notion of creator cameos predated Lee’s Incredible Hulk appearance, but he and the directors of each project gave it a unique spin each time. And when the first Marvel film unspools without a cameo from Stan the Man, his absence will be felt.