How Godless Helps Revive the Western, According to Its Stars 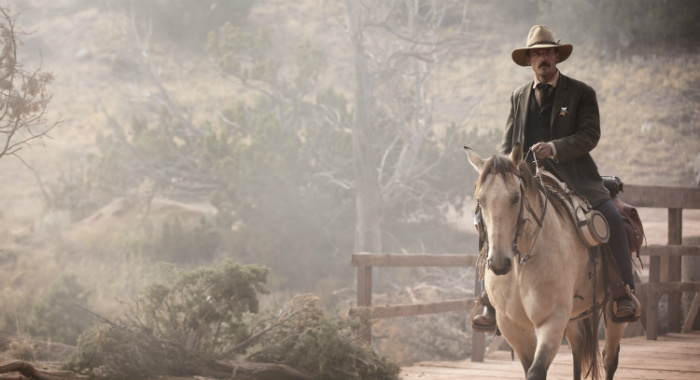 Scoot McNairy grew up watching Westerns — so when he read the script for the movie that eventually became the Netflix miniseries Godless, he was thrilled at the prospect of living out a childhood fantasy.

“The Man From Snowy River; Silverado; The Good, the Bad, and the Ugly — me and my family had a farm outside of town in Paris, Texas, so we spent a lot of your summers up there and holidays … just [watching] old VHS Westerns,” McNairy, who plays sheriff Bill McNue, told Rotten Tomatoes recently. “We only had maybe 20 of them underneath the TV, so we obviously watched the same ones over and over and over.”

Godless, however, is different from those films he watched as a kid.

“I think the Westerns back then were probably a little bit more polished, a little bit safer,” McNairy said. “And I just think that sort of, the medium of entertainment or television or storytelling has broadened in regards to making things a little bit more real or showing things that society or people or the viewers aren’t necessarily ready for … I definitely think that this is a lot more grittier of a Western than some of the John Waynes and polished-off stuff.”

Like McNairy, star Jeff Daniels was wondering how the feature film script he read would turn into a series (he was originally interested in the project 15 years ago in the role that eventually went to the younger actor). But once he read the episodes, he knew the project was special. 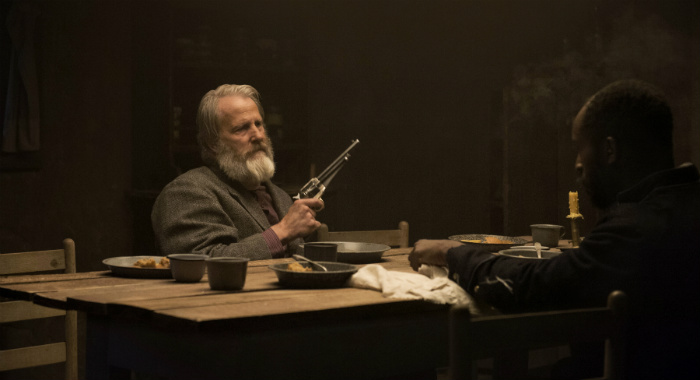 “You go through every script and you stop every 10 pages and you go, what happens next? Guess five things. And if it’s well written, what happens isn’t one of those things. And [creator Scott Frank] is really good at that. So now you’ve got this town inhabited by primarily just women, because of whatever, the mining accident and all that, and you’ve never seen this before. Right? Certainly not in a Western,” Daniels said. “Let’s write towards something no one’s ever seen before. That’s what makes it. It’s just good writing.”

Godless takes place in the 1880s in the rundown mining town of La Belle, New Mexico, a town inhabited nearly entirely by women after a mining accident kills most of the town’s male population. Jack O’Connell plays Roy Goode, a man on the run from his outlaw boss, Frank Griffin (Daniels), and winds up in widow Mary Fletcher’s (Michelle Dockery) La Belle barn. McNairy plays Mary’s widowed brother, Sheriff Bill McNue, and Merritt Wever stands out as a La Belle resident who tries to unite the women of the town so they can support each other and themselves.

“It’s a more realistic version of a Western,” McNairy said. “The women back then did all the work. The men, they would go to the mines and they would go and obviously hunt and whatnot, but it was really the women who were the foundation of these towns, raising kids, and cooking the food, doing all these things that are obviously in this world view, ‘being in the kitchen.’ But without that at that time during these harsh environments of the Wild West in the 1880s, if you didn’t have these women around, I don’t know that the people of the town could thrive.” 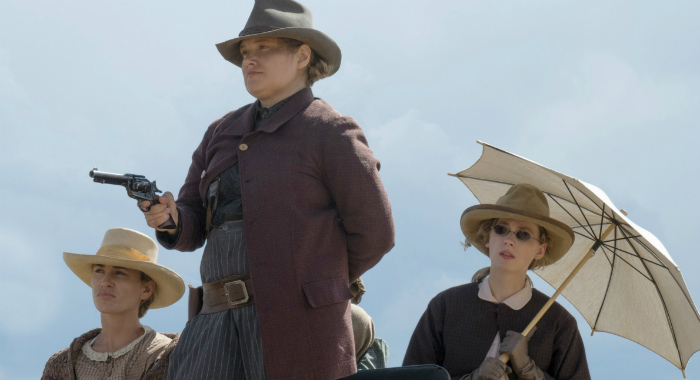 Added Wever, “And the idea that the women in these towns weren’t tough to begin with? I think they were all pretty tough.”

The filming of the series was also literally tough — the locations were remote, and the actors filmed scenes from hours’ worth of material completely out of order over the course of the shoot. That means it was difficult to maintain a through-line for where her character was at any given point in her development.

“Understandable — because I don’t know how you would get the cast even together in the room on the same date for a read-through — but I had a hard time navigating my way through where Mary Agnes was on what day and at what point in the story because of that,” Wever said. “And I told Scott I’d never left a part before wishing that I had another stab at it so badly. I always feel like that, but never like this, where I got to the end and sometimes I would realize something from doing one scene in episode 2 that we’re shooting month three that would inform the whole rest of the piece that I just did.” 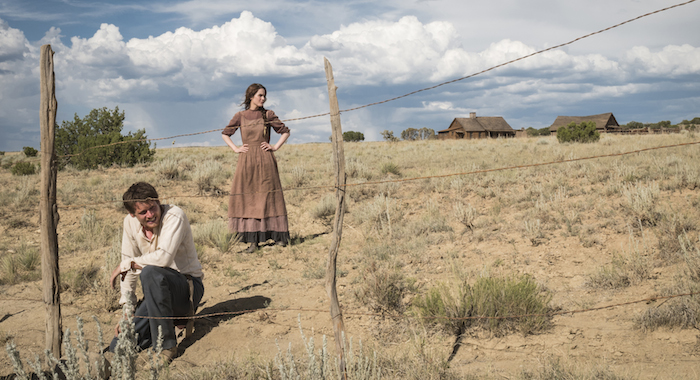 While the show is called Godless and Daniels plays a ruthless killer, his character is also a religious, church-going, scripture-quoting man. Daniels said he thinks religion is his character’s way of coping with the dysfunction in his life.

“He was stolen by a guy and taken away and raised by this guy who was brutal. He’s completely in need of a team of shrinks, which they didn’t have in the 1880s. So, his only therapy, I think, was the Bible. He’d put a bullet in a guy’s head and then quote the Bible,” he said. “I never played it as any kind of conscious, ‘And now I’m going to cleanse myself.’ It’s just, out of desperation, he would start to hang on to the good while he did the bad. And then, cause that’s the way life is. I didn’t make sense of it. I wanted to be as confused about it as he was. So, every time he’s quoting the Bible, he’s absolutely talking to God.”