The Invisible Man and Handmaid's Tale star shares how a herniated disc helped her embody one of the 20th century's greatest writers.

In Josephine Decker’s bitingly dark Shirley, Invisible Man star Elisabeth Moss plays novelist Shirley Jackson, most famous for The Haunting of Hill House and a notorious New Yorker story that made her, at one stage, the most reviled writer in America. Moss is earning major acclaim for her performance in the Sundance breakout – and some early awards buzz. With the movie now available to stream, Moss sat down with Rotten Tomatoes to talk about her approach to playing a version of Jackson that was true to her essence, but which allowed room for her own interpretation. And it all started with a herniated disc. 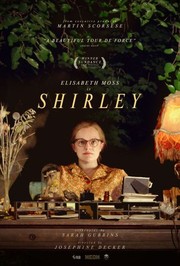 #1
Adjusted Score: 97.598%
Critics Consensus: Elevated by outstanding work from Elisabeth Moss, Shirley pays tribute to its subject's pioneering legacy with a biopic that ignores the commonly accepted boundaries of the form.
Synopsis: Renowned horror writer Shirley Jackson is on the precipice of writing her masterpiece when the arrival of newlyweds upends her... [More]
Starring: Elisabeth Moss, Michael Stuhlbarg, Odessa Young, Logan Lerman
Directed By: Josephine Decker