In a cult franchise of dubious quality, this bizarrely plotted detour is the worst entry. 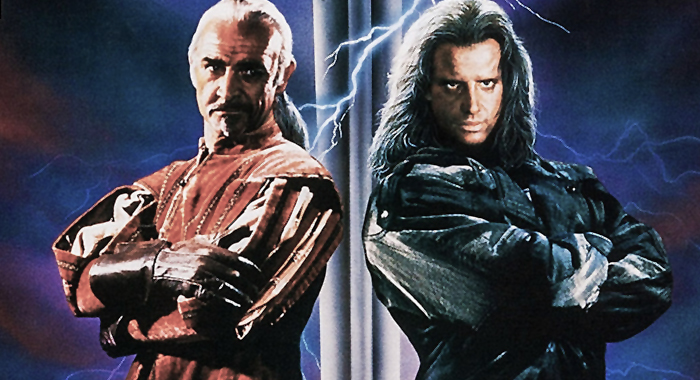 The unfathomably awful 1991 flop Highlander 2: The Quickening holds a place high in the pantheon of embarrassingly misguided, wildly opportunistic sequels. It is reviled with an uncommon fury by critics and audiences alike, but director Russell Mulcahy and the cast have spoken out extensively against it as well.

Roger Ebert eloquently captured the essence of the horror and mortification with which the film was received when he wrote in his half-star review, “Highlander II: The Quickening is the most hilariously incomprehensible movie I’ve seen in many a long day — a movie almost awesome in its badness. Wherever science fiction fans gather, in decades and generations to come, this film will be remembered in hushed tones as one of the immortal low points of the genre.”

Ebert’s words proved prophetic. The movie has become a cult and camp classic of the “so bad it’s good” and “can you believe this?” variety, and while plenty of movies get middling to negative reviews, few turkeys have earned the simultaneously impressive and damning “zero” rating on Rotten Tomatoes quite as flamboyantly or deservedly as Highlander 2: The Quickening did.

According to legend, Mulcahy walked out in disgust just 15 minutes into the movie’s premiere. He reportedly wanted to take his name off the film and have it replaced with the industry-mandated pseudonym “Alan Smithee” but was contractually forbidden to do so. Stars Michael Ironside, Christopher Lambert, and Sean Connery also added to the worldwide chorus of jeers that greeted the movie by publicly criticizing it and what appeared to be a surreal and deeply unpleasant experience filming it in a corruption-plagued Argentina. 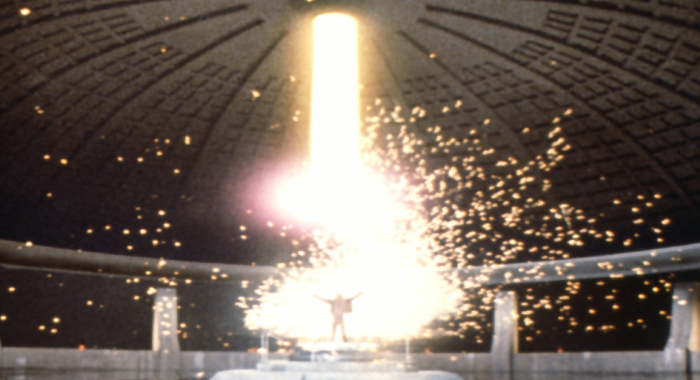 Years later, Mulcahy released his own edit of the film on home video as “The Renegade Version.” The Renegade Version falls somewhere between a corrective for the original and a public apology for being associated with a motion picture so staggeringly incomprehensible. It has to make more sense than the theatrical cut, if only because it would seem impossible for it to make any less sense.

Though also a flop upon its theatrical release, the original 1986 Highlander attracted a sizable, loyal cult enamored with its fantastical mythology regarding Connor McLeod (Lambert) — a 16th century Scottish Highlander who discovers that he belongs to a race of immortals who can only be killed by decapitation — and his adventures throughout the centuries, ending with an epic, high-stakes battle in mid-1980s New York against villain Kurgan (Clancy Brown).

The screenwriters of Highlander 2 puzzlingly decided to discard much of the mythology that made the first film such a cult favorite by making the Immortals aliens from the planet Zeist who battle on a dystopian Earth of 2024, perpetually shrouded in darkness thanks to a series of environmental disasters. The narrative shift was tantamount to making a Star Wars sequel in which all the characters are 1950s California teens, except for Luke Skywalker, who is a World War I pilot for some reason, and then expecting audiences who adored George Lucas’ original to simply roll with the changes.

Highlander 2: The Quickening is so perversely, masochistically intent on ruining everything fans loved about the first movie that it’s surprising that they didn’t alter the beloved catchphrase from “There can be only one” to “There can be anywhere from seven to the low thousands, depending on the month and the location,” or that they didn’t re-cast Sean Connery’s pivotal role as fan favorite Ramirez with Frank Stallone. 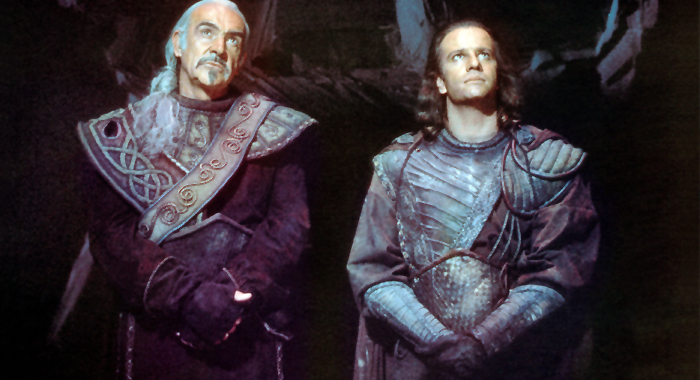 Highlander 2: The Quickening wastes no time establishing that it will be a much different, much more convoluted, and infinitely worse movie than its predecessor with an opening crawl (what is it about terrible movies and opening crawls?) asserting that, unlike Highlander, this sequel takes place in a grim, dystopian 2024.

Ah, but The Quickening doesn’t just unexpectedly take place in the future. It also takes place in outer space, as we learn when a decrepit, doddering old Connor flashes back to his time on his home planet of Zeist, where his friend and mentor Ramirez (Connery reportedly made $3.5 million for just nine days of work) taps him for a dangerous mission against evil space tyrant General Katana (Ironside).

To punish Connor and Ramirez for the attempted insurrection, they’re sent to Earth, where Connor, having helped save Earth from further destruction by building an artificial ozone layer that protects the planet at the cost of perpetual darkness, drunkenly waits to die a lonely natural death. The film’s heavy-handed environmental message has aged about as well Captain Planet’s blue mullet.

Once Highlander 2 makes a bad decision, though, it sticks with it. Lambert isn’t imprisoned in comically unconvincing “old man” make up for just a scene or two; he spends upwards of a half hour Mr. Magoo-ing it up as a ridiculous caricature of an old codger. He isn’t like the title character in Logan, a proud warrior at the bleary end of a hard and complicated life. He’s more like Hans Moleman from The Simpsons, a ridiculous cartoon with a feeble croak of a voice that suggests his lungs and vocal chords consist primarily of lint and dust. 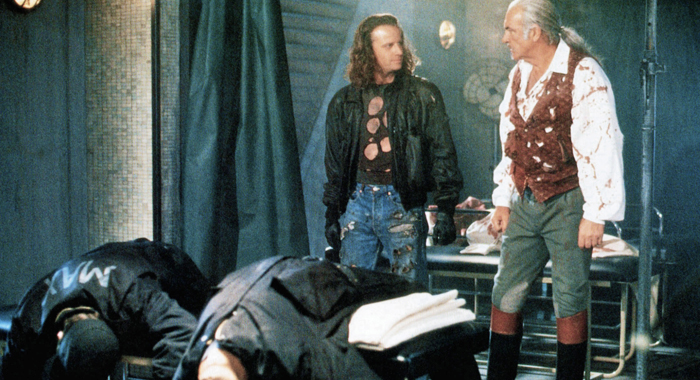 General Katana nevertheless dispatches a pair of henchmen, Corda and Reno — who look like steam-punk porcupine men whose mutant DNA was crossed with that of character actor Bud Cort — to Earth to kill Connor, but the comically unthreatening old man gets his groove back. When he destroys the two goons, he not only brings back his radiant youth and luscious mane of Fabio-worthy hair via the titular Quickening; he brings Ramirez back from the dead as well.

Once Ramirez returns, the film becomes a wacky fish-out-of-water comedy, with Sean Connery mugging up a storm as a Scottish, space alien Crocodile Dundee amazed at the wonders of the 21st century. Michael Ironside’s space tyrant becomes the world’s most murderous tourist, most notably in a notorious set piece in which he thrill-kills future New Yorkers by hijacking a subway train and taking it on a high-speed joyride through a wall. Connor, meanwhile, romances sexy terrorist Louise Marcus (Virginia Madsen), who is fighting a righteous crusade against The Shield, a sinister corporation led by David Blake (John C. McGinley) that has come to hold power over the artificial electromagnetic field Connor helped create to protect the earth from the sun.

Acting as an audience surrogate, Louise tries to make sense of the incomprehensible gobbledygook that constitutes the film’s plot and impenetrable, needlessly complicated mythology. At one point, she says to Connor, “Okay, now let me just see if I can get this straight. You’re mortal there, but you’re immortal here until you kill all the guys from there who’ve come here, and then you’re mortal here, unless you go back there, or some guys from there come here, in which case you become immortal here… again.” 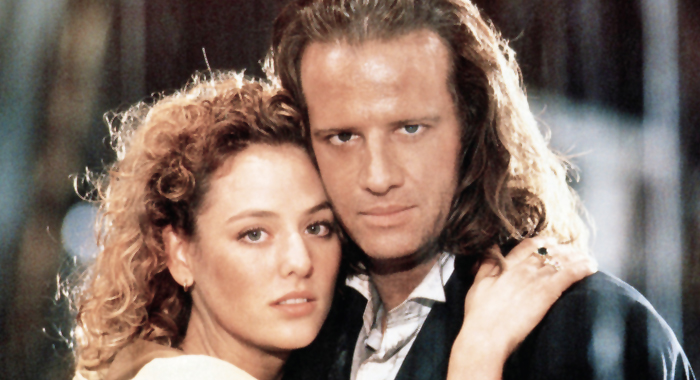 Connor chuckles and replies that she’s right, but the film is somehow even less coherent and more confusing than Madsen’s words suggest. Even the movie’s own characters don’t seem to know what’s going on from scene to scene or moment to moment.

Highlander 2: The Quickening’s jarring shifts in tone, genre, and style are epitomized by its choice to make its two main villains a demented general from outer space who looks and acts like a psychotic Renaissance Faire Ozzy Osborne and the aforementioned David Blake, an oily executive in an expensive suit who’s essentially a junior league Gordon Gekko with questionable judgment.

This partnership of convenience ends, inevitably, when one partner grabs the other by their genitalia, crushes them in his hand, and hurls him by his crotch out of a window to a violent death. It’s almost as if you can’t trust warlords from outer space, and should be wary of forming alliances with them, no matter how evil or ambitious you might be yourself.

It’s easy to see why Ebert predicted perverse cult glory for Highlander 2: The Quickening even as he eviscerated it in his review. Like the similarly reviled Star Wars Holiday Special, The Quickening takes a beloved franchise in such a bizarre, off-brand direction that it’s hard to believe it exists, let alone that it’s an official — albeit deeply regretted — part of a venerable pop-culture institution’s checkered legacy. 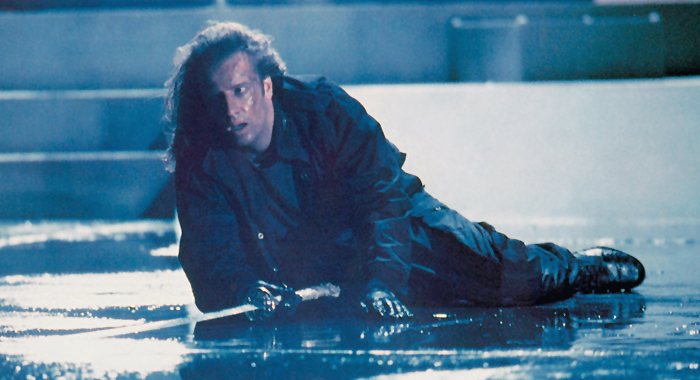 What do you do next when you make a mistake as egregious as Highlander 2: The Quickening? If you’re the folks behind the Highlander franchise, you pretend the movie never happened, erase it from the mythology, and move on. It’s a testament to how much people loved the characters and story of the original film that Highlander became a big multi-media franchise despite Highlander 2.

The story of the Immortals would continue not just in theatrically released sequels like 1993’s Highlander III: The Sorcerer and 2000’s Highlander: Endgame, but also in novels, comic books, multiple television adaptations, card games, and a 2007 Japanese anime film. A remake, perhaps unsurprisingly, has been in development hell for much of this decade, attracting, at various points, talent like Ryan Reynolds and Dave Bautista and filmmakers like Justin Lin, John Wick’s Chad Stahelski, and 28 Weeks Later’s Juan Carlos Fresnadillo.

Mulcahy, meanwhile, did his part to offer the world a variant of this story that made at least a tiny bit of sense with the film’s Renegade Version, which did away with the exceedingly fan-unfriendly conceit that the Immortals were aliens.

If a film series can survive a boondoggle on the order of Highlander 2: The Quickening to produce more movies, TV shows, a possible big-budget reboot, and other ancillary projects, then perhaps it truly is immortal and cannot be destroyed.

Nathan Rabin is the author of six books and the proprietor of Nathan Rabin’s Happy Place.
Follow Nathan on Twitter: @NathanRabin