Hear Us Out: Red Eye Is One of Wes Craven's Best Works, And We Should Not Forget It

The taut and terrifying thriller marked a return to form for the master of horror and saw him at the peak – or at least the cruising altitude – of his formidable powers.

After a run of Rotten disappointments in the early 2000s, horror maestro Wes Craven released airplane thriller Red Eye in 2005. It was acclaimed as a smarter-than-average, skillfully made terrorist thriller at the time – a two-hander about two strangers who meet on a plane, one a dedicated hotel employee, the other a sinister suit with a secret and a terrifying mission – and would be the late director’s final Certified Fresh film. And yet the movie has been largely forgotten by many, and is rarely mentioned among Craven’s best works. It’s easy to see why: The director is synonymous with Freddie, and Ghostface, and violent ’70s and ’80s terrors; Red Eye was in many ways a conventional thriller, well done if slight, bearing little of Craven’s trademarks — at least on the surface. Look closer and the movie has the director’s bloody fingerprints all over it, from his ability to expertly read and reflect a nation’s current fears to his fine work with young, on-the-verge actors. And yes, he even gives us a great Craven crescendo.

So, hear us out: It’s time we remember Red Eye for what it is – one of the master of suspense’s best works. Here’s why.

It Marked A Triumphant Comeback For the Legendary Director 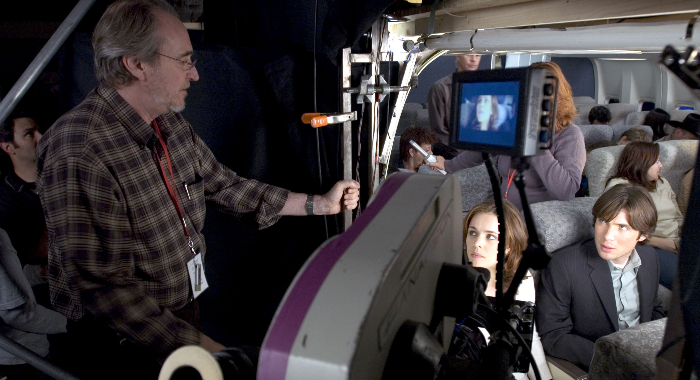 Horror fans rightly revere Wes Craven as a legend, a master of horror, the man who gave us iconic and genre-defining works like A Nightmare on Elm Street, Scream, and The Hills Have Eyes. If there was a Mount Rushmore for scary movie guys, his face would be on it. But in a 40-year career there are always going to be misses among the hits, and Wes Craven’s filmography is about as bumpy as a desert road trip in a Wes Craven movie. (Remember Vampire In Brooklyn? Or My Soul to Take? Or The Hills Have Eyes 2? We do.)

The director hit a particularly rough stretch of road following the success of Scream 2 and 1999’s kinda-sorta-well-received play at Oscar glory, Music of the Heart, an earnest inspirational-teacher drama starring Meryl Streep. In 2000, he released Scream 3, the first and only Rotten entry in that franchise, and followed that up with Cursed, a so-bad-it’s-actually-fabulous-in-retrospect attempt by Craven and Scream writer Kevin Williamson to revive the werewolf genre… by making a Scream rip-off with snouts. (Production was a complete mess on the project, largely thanks to interference from the Weinsteins, and it shows.)

By 2005, the only way for Craven was up, and – cue airplane metaphor – Red Eye allowed him to soar. Liberated from studio interference and overwhelming expectations – he wasn’t being asked to close out a beloved trilogy or kickstart another subgenre renaissance – Craven brought his formidable talent for suspense to a smart and self-contained script by Carl Ellsworth, and showed his often too-unsung ability to bring the best out of young actors. Critically lauded as one of the tightest, most nerve-racking thrillers to come along in years, Red Eye was a reminder that the master still had a knack for terror – no matter the altitude. 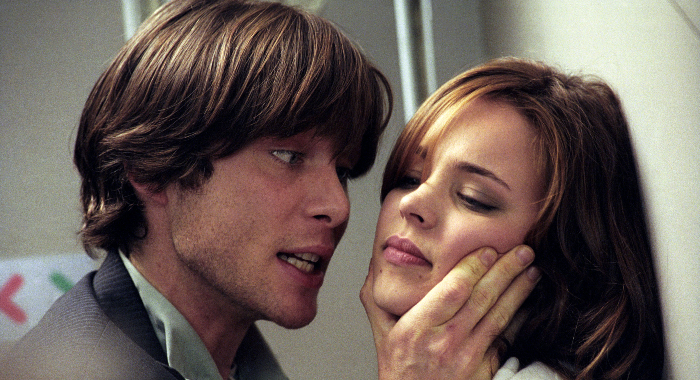 It’s a testament to Cillian Murphy’s skill as an actor that we don’t dismiss him – or the film, really – the instant we learn his villainous character’s name is “Jackson Rippner.” Murphy, whose 2005 would include his entrée into the mainstream playing Scarecrow in Batman Begins, is all alluring mystery as he flirts in the check-in line and over drinks at an airport bar, and when the script turns, he makes a seamless transition to pure menace. But the movie ultimately belongs to this two-hander’s other hand, Rachel McAdams, fresh off of The Notebook, showing the same steeliness and pluck audiences loved in that film as she tangles with an altogether different kind of male pursuer. Like Rippner, her Lisa undergoes a transformation as the plane races towards Miami: From exhausted daughter allowing herself a little fun to terrified prey, and, ultimately, resourceful final girl, and McAdams delivers on every note. By the time the film devolves to a Scream-a-like in its house-bound finale – or ascends to it, depending on your tastes – you find yourself rooting for her just as you would a bloodied, bruised, but still-standing Sidney Prescott or Nancy Thompson. 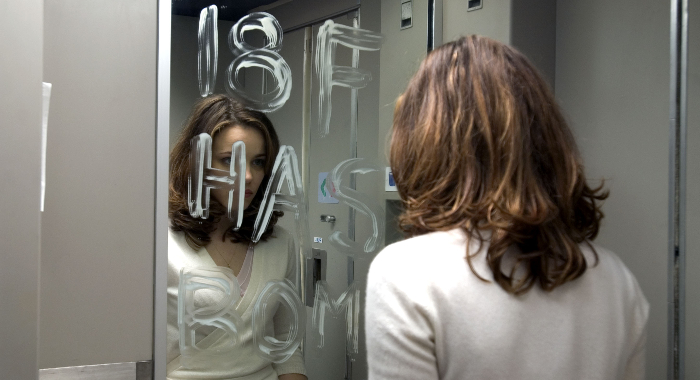 Craven was an expert when it came to perfectly encapsulating an era’s fears, and Red Eye is no exception. Flying in the years after 9/11 was a source of serious anxiety for many Americans onto whose brains the images of that tragic day were still freshly etched. That anxiety was stoked throughout the 2000s by reports of unsuccessful terrorist attempts – Richard Reid’s failed shoe-bombing among the earliest – involving commercial flights and airports. The palpable national fear around air travel led to many things: The time-consuming security measures we undergo when we fly; some awful racial profiling by passengers and authorities; and, of course, several movies that tried to mine that fear for cinematic thrills.

In 2005, Red Eye did just that, along with the bigger-budget Flightplan, starring Jodie Foster as a mother who wakes up mid-flight to discover her six-year-old daughter has disappeared. (Author side note: On a flight back in 2005 I was awakened mid-flight BY Jodie Foster lightly bumping my shoulder as she took her child to the bathroom!) But Red Eye was the more successful of the two, critically if not commercially, because it hit the nerve harder and more directly. Where Flightplan’s tale was complicated, confused, and conspiracy-focused, Red Eye was born directly from the very simple questions many travelers were sweatily asking themselves as they took their seats: Who am I sitting next to? What if I’m on that flight? Would I fight back – or cower?

The movie also gets the more general horrors of modern-day air travel spot on, with nods to the draconian security process – “Flying’s so much fun these days!” – and one of cinema’s most realistic renderings of coach class. Just watching Lisa squeeze herself down the aisle as other customers sardine themselves into the cabin, over-stuff the overhead, and, in one particularly visceral cutaway, slurp up a box of noodles… I shiver every time. 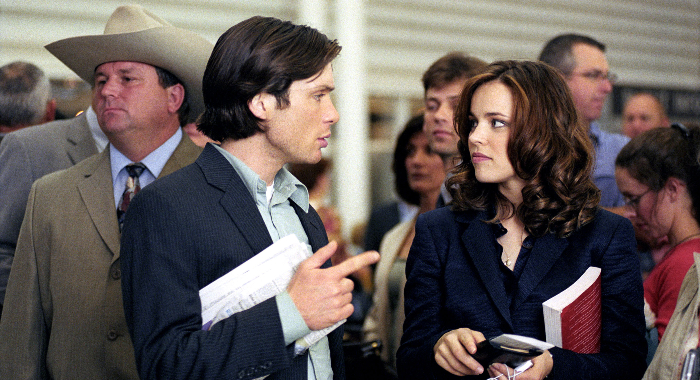 In one sense, Red Eye is a high-octane game of cat-and-mouse between a psychotic terrorist and a resourceful final girl; in another, it’s about two cogs in two different corporate machines trying to satisfy their employers and getting in each others’ way in the process. Because that really is the crux of what the two characters are doing: Lisa, the ever-diligent employee, who’s seen constantly solving problems for her mega hotel and its customers, is willing to risk her own father’s life to try to avoid harm coming to either; Jack is the mid-level manager who’s been given an assignment – get Lisa to change the room – and will stop at nothing to keep a client satisfied. The client just happens to be some sort of terrorist organization.

Jack in particular becomes a kind of maniacal embodiment of make-the-sale-at-any-cost corporate culture – he’s the knife-wielding version of a Wall Street banker in some respects – and at one point leans in to tell Lisa they may not be so different. “I never lied to you, Leese,” he says, as she struggles for air. “Know why? ’Cause it doesn’t serve me. We’re both professionals. We have the will and means to follow through. ’Cause when we don’t, our customers aren’t happy. And when they’re not, we suffer and our lives go to s—.” I swear I’ve read that in a corporate training packet somewhere…

The Ending Is Bonkers, In a Good, Polarizing, and Craven-y Way 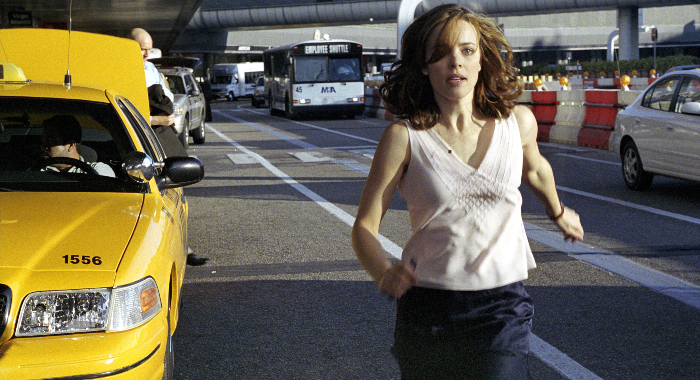 At the time of its release, a number of critics pointed out that the thriller’s finale feels out-of-step with the taut, disciplined film that precedes it; when the plane lands, the intimate suspense Craven built up in the fuselage is traded in for an elaborate chase sequence that takes us through the airport and eventually to Lisa’s father’s house where Rippner grabs a knife and gets all Ghostface on us. There’s hiding behind walls, and creaking doors, and falling while running away, and a pretty great he’s-behind-the-door jump scare. It’s all a bit ridiculous.

Why does it work? Because for all of its incisive mining of post-9/11 fears, its light social commentary, and its tight script, Red Eye has an air of the ridiculous right from the get-go. Everything in the film is heightened to an almost surreal, wink-wink level: Think Jayma Mays’ hilariously frazzled hotel receptionist; Colby from Survivor showing up as a cartoonishly stoic bodyguard; almost every other passenger on the flight rendered as if plucked from an SNL skit; and the overall terrorist plot itself. Just when you think that having a government official moved to a penthouse suite so that it’s easier for terrorists to blow up his room with a surface-to-air missile is straining credulity, said terrorists retrieve their missile by fishing it out of the water with… a few regular fishing rods.

The movie’s climax is only out of step if you weren’t paying attention to the movie itself. It is excessive, and, yes, it has more than just echoes of Craven’s previous work, but it’s also a release; the director eschews a tighter, neater, subtler ending to give the audience what they want, making a meal of the tension he’s built throughout and throwing on a second dessert of slasher fun just because he can.

And Craven can, which is the other exciting thing about this finale. It is tense and scary and delicious. After two public failures, and with his ability to jolt us out of our skin in question, the master gives us 15 minutes of what he does best, reminding us he’s indeed still a master. Just because he can. 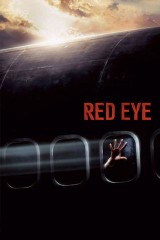