HBO series' Jaime Lannister offers insight on an emotional moment from last week, talks about the prison tattoos he sports in his new film, and answers some fan questions. 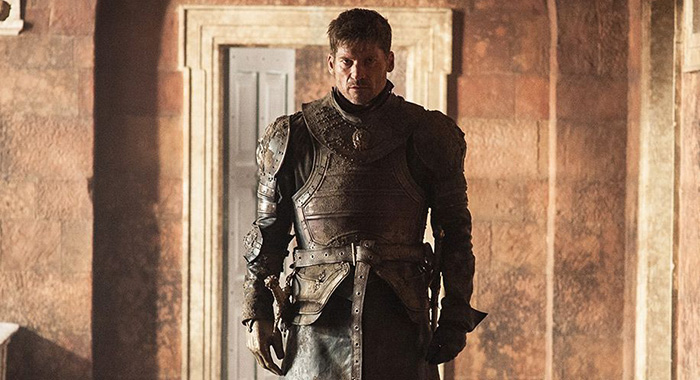 Game of Thrones stunned its Sunday night audience during its “Eastwatch” episode when Queen Cersei Lannister (Lena Headey) divulged to her twin that she was pregnant with their fourth child. The moment was remarkable not just for the twistiness of the revelation, but also for the volumes spoken by Nikolaj Coster-Waldau in an affecting, but understated performance as Jaime Lannister.

“Who will you say is the father?” Jaime asks. “You,” she replies, and, with a few subtle changes of his face, his countenance transforms from initial disbelief to quiet euphoria to anxiety over the potential public reception of that news. After she reminds him of their father’s stance that “the lion does not concern itself with the opinions of the sheep,” she warns him never to betray her again — and, just like that, the connection between the two in this delicate moment snaps.

Coster-Waldau — who has appeared in such Certified Fresh fare as Black Hawk Down, Headhunters, and 1,000 Times Good Night — brings a similar measured emotion to his new role in the film Shot Caller, released Friday. In it, he appears as businessman, husband, and father Jacob Harlon, who lands in jail with violent offenders after a DUI. Jacob transforms into prison gangster “Money” in order to survive and loses every trace of his former self in the process.

Rotten Tomatoes spoke with Coster-Waldau on Thursday about Lannister family values and the politics of prison gangs. 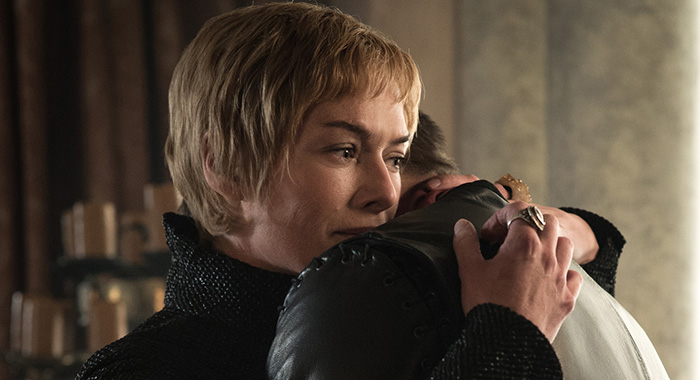 Debbie Day for Rotten Tomatoes: You’ve been doing such great work this entire season of Game of Thrones. You were before, of course, but there’s a subtlety that really presented itself in “Eastwatch” — for instance, when Cersei says she’ll name Jaime as the father. Can you tell me a little bit about how you approach those kinds of moments in the script — like, starting from when you read them.

Nicolaj Coster-Waldau: That moment was — I was very surprised. I kept asking the writers, “Are you sure about this?” I’ve been driving them crazy this season because there are so many questions — in that moment, also the moment with Tyrion, I was like, “What about the things they don’t say? Could I just say some of those things? Like the subtext?” And they were like, “No,” which when I see the scene, it totally makes sense. But it’s also lot to do with what’s not being said. When Cersei drops that bomb, there’s a moment of disbelief, but there’s also that — I think he sees, she seems happy for the first time in years, right?

So he kinda goes, “Holy sh–, this might be real!” And then, it’s been a dream of his for so long. I mean the dream that he had since they were very young teenagers that they could be — the two of them and to be open about it. Imagine that. Imagine you’ve been the father of three children that didn’t know it. Except for Myrcella at the very end, he had one brief second of understanding what it meant to be open about this and then for her to say, “Well, I’m happy that you’re my daddy.” That was one of the happiest moments in his life, and now she’s telling him, “This might happen again.” And obviously it’s a spontaneous response. His emotional response is “No.” It just happens, he doesn’t think about everything else. He just can’t suppress his little moment of joy.

Then she just destroys it by going all dark on him when they embrace and saying, “Don’t ever betray me again,” which kind of brings him back to reality — bit of a crash landing.

But I think it’s one of those things that I’ve always loved about this part and also about the relationship, is that it’s so impossible. But they do what they do, they’ve done what they’ve done, they have been apparently unable to stop. It’s insane. And for some reason on a very basic level, I get it. It’s so easy to be morally shocked about the brother and sister thing, and yes, it’s absolutely horrific — blah, blah, blah. But I mean I can’t use that as an actor. I have to use the idea that I fall for someone who I just should not be together with. This is just the last person I should ever fall in love with. And that I can use.

The irony, of course, is that we have a situation where I think 95 percent of all the audience are rooting for Daenerys and Jon Snow to get together, which is going to be the next incestuous relationship. That’s the beautiful irony, though.

The Violence, Politics, and Prison Tattoos of Shot Caller 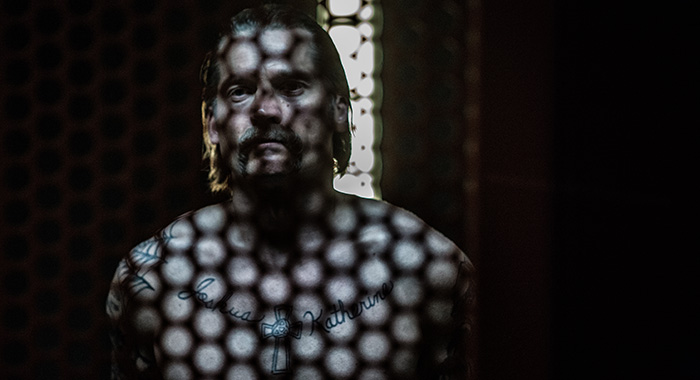 (Photo by Courtesy of Saban Films)

RT: You dirty it up in Shot Caller — it’s like your Monster role. Were you intentionally choosing a role that would distance you from this sort of golden knight that Jaime Lannister is in Game of Thrones?

Coster-Waldau: No, I mean I’ve been doing this for 25 years. And yes, the Lannister thing is a big thing of the last 10 years, but also the last 10 years, I’ve done one or two movies every year. Obviously something as successful as Game of Thrones will cast a long shadow — there’s no question about it. But no, I just read a script, I loved the script, and I loved the character, and I thought it was heartbreaking what happened to him, but I also thought it was really interesting. I could see it would be a great challenge to take on, but, no, I wasn’t looking for something where I could be ugly at all. Obviously the last 10 years I haven’t played any medieval knights — I could probably have done nothing but that if I wanted to, but no.

RT: Is it an awkward time to be playing a white supremacist?

RT: No, come to think of it. No, but I wouldn’t want to give away too much.

Coster-Waldau: I met a lot of people to do research for this movie, because I loved the script and I thought it was amazing. And then I kept saying, “But, listen!” — because, you know, I had never been to prison — and I said, “We want this to be authentic and how realistic is this story?” And then Ric [Roman Waugh], the director told me all about this. I met these guys, inmates, former inmates, correctional officers, and I visited a prison, and it became very clear to me that it was eerily close to reality.

And then I met a guy who was a former shot caller, and he told me his story, and it was — obviously it was different, but it was very close to home: He was 20 when he was put in prison and he was non-violent. He had done really stupid stuff — carjackings, and theft, and a lot of stupid stuff — but he was still a non-violent offender who was put in with hardened criminals, and he had to learn to become, he became very violent. And his journey was very similar to that of Jacob.

And then I asked, because when I met him he still had all his tattoos. All of them were covered up, but you could still see that these were, you know, a lot of the — the iron cross, the swastika, all that nasty sh–. And I asked him about it, I said, “Are you all white supremacists? What’s the story?” And he said, “No, you might find one or two guys who knows anything about the ideology, but this is just a gang. We’re gangsters. This is about money. It’s about control. It’s about power.” And I said, “Well, what about the tattoos?” He said, “The tattoos, that’s war paint. It’s just to make you afraid when you look at me.” And I said, “Well, it certainly works.” Because you just look at all the gangs, they’re all tatted up like crazy, and it’s all about making you fear them. And that absolutely works, right?

RT: Right, I think it works in the film, absolutely. Actually, I think the only time you really see any sort of “white pride” kind of talk is in the prison yard.

Coster-Waldau: It was a complete surprise to me that the gangs originated inside. The gangs in the streets are controlled from inside, even to this day. That’s scary. And of course it’s scary — because we put in non-violent offenders with very violent offenders. That’s a recipe for this to happen.

The fact that America has more people locked up per capita than any other Western country is pretty insane. They’re the most powerful, the wealthiest country in the world. That doesn’t make sense. And it’s just a waste of money. It’s a waste of human resources. There is, I think, a pretty strong bipartisan agreement that prison reform is needed.

RT: Interesting that your perspective is sort of activism for prison reform.

Coster-Waldau: I’m not saying its activism, I’m just saying it’s going to hopefully get some debate going. Let people think about it, because one of those themes shown in the movie is that until it happens to you, nobody really cares about what goes on in prison. I think a lot of people when they see the movie hopefully would be able to go, “You know that could happen to me. It could happen to someone I know: that you had a glass of wine too many, you got behind the wheel of a car, and then a tragedy happened.” It’s not that far-fetched.

Then you would hope that you didn’t end up in complete hell, even though you committed a crime. He committed a crime, and he’s owning it, and he’s willing to serve his time, but of course, he’s not just allowed to serve his time. It’s not like you’re allowed to go in and be locked up and contemplate — you are put in a shark tank. As a society it doesn’t make sense that we waste our resources like that. But again for me, it’s a debate. I’m not an activist here. We’re just storytellers. 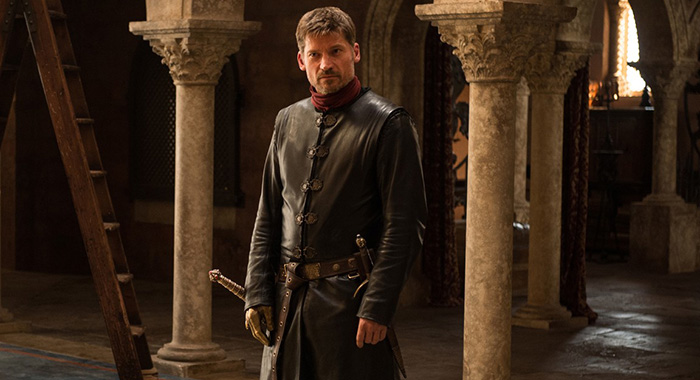 RT: We offered members of our Debate of Thrones Facebook group the chance to ask some questions — is that OK?

RT: One: “Do you hope Jaime will be able to break away from Cersei and become free?”

Coster-Waldau: Pass on that. I can’t answer that: spoiler.

RT: I think that the second one’s a spoiler too: “Do you think Jaime will betray Cersei for his brother?”

RT: “What do you think are some of the best and worst traits your character has had from season 1 to season 7?”

Coster-Waldau: The best and worst traits: In the beginning he used arrogance as a shield, which was really annoying. It’s not a very nice trait. I think his pride is also this way sometimes. He acts before he thinks. That can be both good and bad. I would also say loyalty is also good and bad, because he’s insanely loyal. He’s so loyal, when you go, “How can you stand by this craziness?” But he is. He’s loyal to the family above all. The good things he will do — if you’re on a team, he’ll do anything for you, which is a great thing. And you can trust him 100 percent. That’s a good thing.

RT: One more question if you don’t mind: “Will Bronn get his castle?”

Game of Thrones airs Sundays at 9 p.m. on HBO; Shot Callers is now in theaters.