Disney’s first-ever theatrically released princess-movie sequel, Frozen II, is set to light up the box office ahead of the holidays when it hits theaters November 22. Ahead of the movie’s release, Rotten Tomatoes correspondent Naz Perez sat down with the key returning cast (Kristen Bell, Idina Menzel, Josh Gad, Jonathan Groff) as well as some newcomers to Arendelle (Sterling K. Brown, Evan Rachel Wood) to talk about the movie’s mega new songs and musical numbers, as well as to fantasy-cast the completely inevitable Frozen live-action remake. Plus, we spoke with the duo behind Frozen‘s original music, Kristen Anderson-Lopez and Robert Lopez, about the challenges of getting lightning to strike twice after the phenomenon of “Let It Go.” 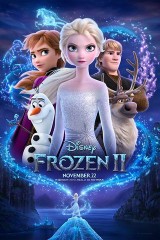 #1
Adjusted Score: 94821%
Critics Consensus: Frozen II can't quite recapture the showstopping feel of its predecessor, but it remains a dazzling adventure into the unknown.
Synopsis: Elsa the Snow Queen has an extraordinary gift -- the power to create ice and snow. But no matter how... [More]
Starring: Kristen Bell, Idina Menzel, Josh Gad, Jonathan Groff
Directed By: Chris Buck, Jennifer Lee