Just another rainy day in London. The mood at a swanky but down-to-earth eatery in the East End is tense. By the window, a young couple have something of a disagreement. She then walks out whilst he sits back in his chair, resigned to his fate. Someone from across the room yells “cut!”

Suddenly the mood livens, the rain stops, the girl walks back in and laughs with her companion and around them a gaggle of technicians get to work, fixing lighting, trailing cables and turning on smoke machines. Welcome to the world of Franklyn. The girl is Eva Green, the boy Sam Riley and the sorcerer who changed the mood in the room with a single word is first-time director Gerald McMorrow.

Rotten Tomatoes has come to his set to find out more about his creation. Intrigued as we’ve been by the premise, we still don’t quite understand it on paper. And as we stand in the East End bar, confusedly trying to put the pieces together for ourselves, he eventually helps us out.

“Franklyn is basically about four intertwining stories, three of which are based in contemporary London and one of which is based in a kind of parallel fantasy environment called Meanwhile City,” he says (and this is where it gets confusing) “Our hero in that strand is this sort-of masked vigilante detective who’s the only atheist in Meanwhile City, played by Ryan Phillippe, who basically runs around trying to extract people from cults, has a big cynicism about the whole thing and hates The Ministry with a vengeance.”

Ryan Phillippe (no, really) as Jonathan Preest in Franklyn

Meanwhile City? The Ministry? “It’s this place which is sort-of run by a shadowy, religious uber-power called The Ministry who has decided, over the centuries, that as long as they can get their population to believe in something – anything – they can control them. People have faiths and religions based on strange things like The Seventh Day Manicurists and Washing Machine Street Preachers. Their doctrines and dogmas are all based on things like washing machine instructions.”

Right. So that’s one of the four strands explained, then. “The other three strands are in contemporary London. Eva Green plays Amelia who’s basically a much damaged, suicidal art student who’s drifting in and out of her video art installations involving cry-for-help suicide attempts. Then you have Sam Riley who plays Milo, and he’s probably much more normal and down-to-earth and he’s basically just been jilted at the altar. That promotes him to suddenly try and search for the purity of his first love. And then the fourth story belongs to Bernard Hill who plays Peter, a church warden in Cambridge who comes down to London to find his homeless son. And all four strands come together at the end.”

Alas, asking McMorrow how they connect, which is really the sticking point for us right now, would spoil the ending, and so we remain confused. “It’s rather intricate piece of plot work, but it’s one of those things; you can’t really say too much. But ultimately, hopefully, it’s one of those things where if I were going to see it, I wouldn’t want to be told ahead of time.” 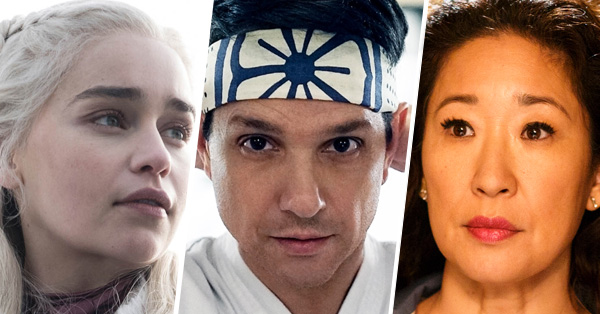 11 TV Shows You Should Binge-Watch This April