5 Things You Need To Know About Peacock's MacGruber Streaming Series

Will Forte's super spy is back after 11 years for another silly spy adventure. The over-the-top action sequences, goofy fart jokes, and unexpected emotion flows in the Peacock series.

MacGruber is back to save the world — whether he likes it, or not.

Will Forte’s juvenile-minded super spy began as a parody of ABC’s MacGyver television series of the 1980s and first appeared on Saturday Night Live in January 2007, in a comedy sketch created by The Lonely Island’s Jorma Taccone. Forte stepped into the titular role with the support of his love interest Casey (Maya Rudolph) and work partner Vickie St. Elmo (Kristin Wiig). Nearly three years after using a paperclip, gum wrapper, and rubber band to bungle one rescue mission after another, the potty-mouthed hero jumped from the sketch comedy realm to the action movie one.

The movie, which was directed by Taccone and written by former SNL writer John Solomon, found MacGruber partnering with Lt. Dixon Piper (Ryan Phillippe) and Wiig’s St. Elmo, his new love interest, to stop the evil Dieter von Cunth (Val Kilmer) from shooting a nuclear warhead directly at the U.S. Capitol. While the movie has garnered cult status over the years, it didn’t achieve the necessary box office returns for a sequel to immediately be greenlit.

It’s been 14 years since the first MacGruber sketch hit the small screen, and he’s about to return in MacGruber — Peacock’s eight-episode sequel series, which will drop in full to the streamer on Thursday, December 16. This time around, MacGruber is plucked from prison — he got put there, in the first place, after all the over-the-top murdering he did in the movie — to go on a suicide mission to stop a terrorist threat and face an ominous villain from his past, in order to keep America safe. Again.

Taccone, Solomon, and Forte have returned as writers, co-showrunners, and executive producers on the series. Taccone and Solomon split directing duties on the project. Phillippe and Wiig will make their triumphant return as Piper and St. Elmo. Laurence Fishburne, Billy Zane, and Sam Elliott will also appear.

Rotten Tomatoes spoke with Forte, Taccone, and Solomon to find out more about the series. Here are five things you need to know about MacGruber.

1. They had over a decade of jokes to work with.

Jorma was quick to admit that the Peacock series was probably the result of them all manifesting the sequel into existence, saying, “We just kept mentioning that it was happening in interviews, and then it becomes real because nobody has time to do any backstory, research on stuff. So we just sort of made it happen by saying that it was happening.”

To push this hard, for this long, to keep the MacGruber story alive, Taccone and team reportedly kept a living Google Doc for over a decade featuring every silly concept and fart joke they thought would fit into the story.

“It was just us running all the ideas that we had wanted to do for a sequel right after the movie came out for the first five minutes after it came out,” Taccone explained. “We thought it was gonna do really well. And then when it didn’t, all these ideas just became sort of like, well … maybe. Maybe. So we just kept adding to this Google Doc for over 10 years. A lot of those ideas ended up in the series. We’re just glad to finally use great jokes and ideas.”

Forte admits there were plenty of ideas that didn’t make the cut, which he hopes will be in a second season if Peacock grants them more episodes. But many of their favorite ideas do indeed play out here.

“We had always intended on having the phrase ‘I did it all for the nookie’ in there,” Forte said. “And we wanted the rule of ‘whoever smelt it dealt it’ to be a major plot point. It’s dumb stuff like that. We would just do this big document and throw whatever on there. And I think a surprisingly high percentage of things actually made it into the series from that.”

2. It’s got an excellent supporting cast… 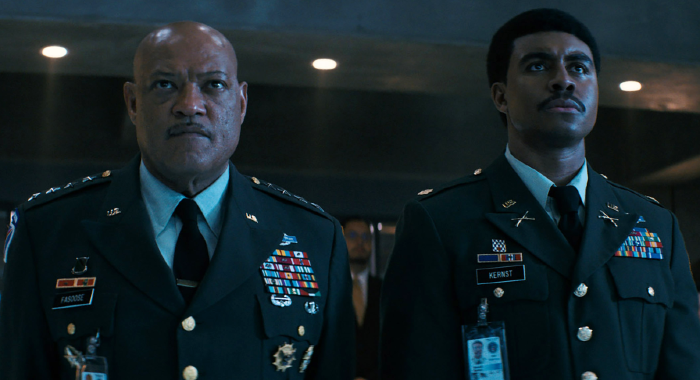 Val Kilmer’s appearance in the original movie gave MacGruber clout. And his performance as the sinister Dieter von Cunth showed off the actor’s silly side while setting the stage for a trend of big-name dramatic actors showing up in MacGruber’s childish world. Laurence Fishburne co-stars as General Barrett Fasoose, an annoying thorn in MacGruber’s side; Billy Zane is Enos Queeth, the show’s big bad; and Sam Elliott lends his gravelly gravitas as Perry, MacGruber’s father.

“I still can’t believe that we got them to do it,” Forte admitted. “It was so exciting going into this and then hearing that those guys were all willing to be in it. It was already super exciting that Kristen and Ryan wanted to come back. It was really an embarrassment of riches.”

3. …and an unexpected emotional backstory at its core. 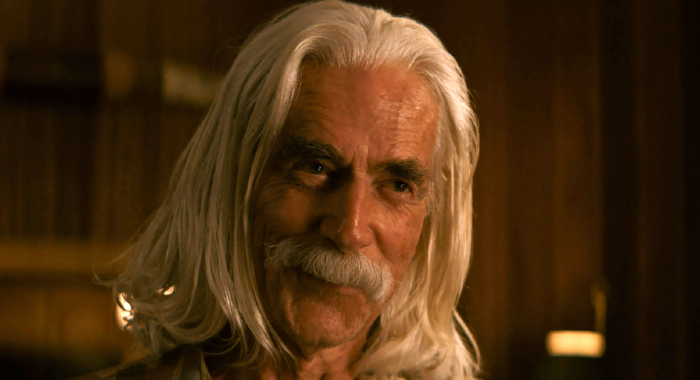 MacGruber will bring the comedy and action scenes, as fans are hoping, but one new detail fans may not expect from the show is the big backstory reveal they’re giving to the mullet-having hero. Necessary? Probably not. But the emotionality in this new adventure will definitely pluck a heartstring or two.

“I would say, all around, it’s heightened with the gore and story, and emotion,” Taccone said. “And then there’s the backstory. I actually watched Fast Nine, recently. It was like, Oh, we’re just getting way too emotional with the backstory that you’ve never heard of. On every level, we wanted it heightened and to be a surprise.”

The backstory in question involves Sam Elliott’s portrayal of MacGruber’s dad, Perry. According to Forte, working with Elliott was a dream come true.

“There’s this over-the-top dramatic scene, which is just a bunch of silly, silly things said super dramatically. Right. And, of course, I come in and I do my side of it. It’s real hammy and with just super overwrought emotion. Then [Sam Elliott] delivers, like an Oscar-caliber, dramatic performance which totally fits in, and it just makes the scene so fun to watch. He is amazing. We all couldn’t believe it. That was the very first scene that he did. He just did this and our jaws dropped.” 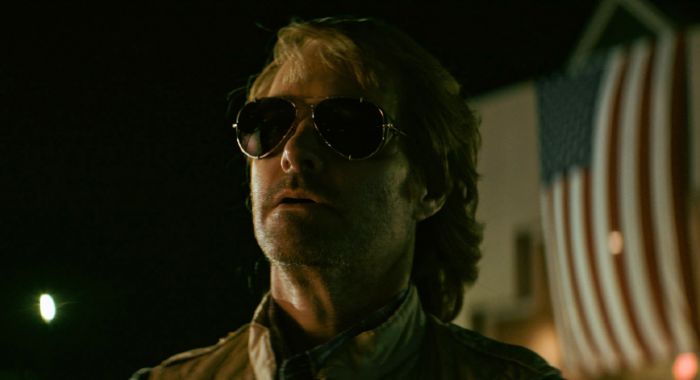 After riffing on MacGyver on SNL, the MacGruber movie helped the core team spread their creative wings and pay homage to other ’80s and ’90s action faves like Die Hard, Lethal Weapon, Commando, and Rambo. As Taccone put it, “these are little nods to the things we loved.”

The cinematic influences will continue in the MacGruber series. Since the story stakes are higher, this time around, Taccone admits they have tapped into some movie homages with a bit more urgency.

“Armageddon was a real influence,” he continued. “Billy Bob’s in the command center that feels very much like our NSA command center. There’s the camera movement and there’s even a clock that was in the background I kept trying to get in shots. I kept being like, There has to be this clock behind Billy Bob! We wanted to change the vibe to have a bit more camera movement and be more like Bruckheimer and Michael Bay. Stuff like that. And, still on a shoestring budget.”

Two other titles that were regularly discussed in the writers room, according to Solomon, were Skyfall, “because, the brooding, you know?” and Fast and the Furious, due to all that pesky family drama. 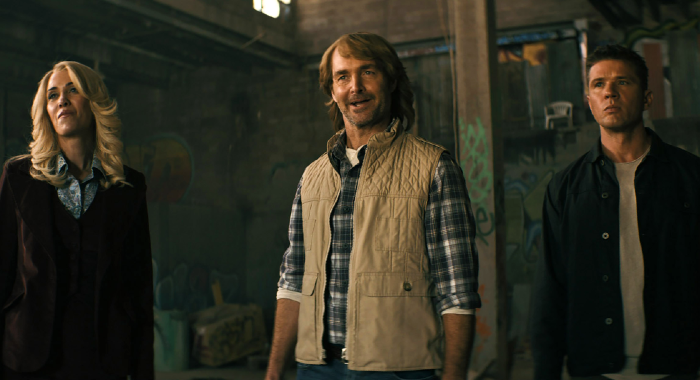 It’s a pretty safe assessment to say that, if given a rating, MacGruber would be clocking in with a hard-R. There’s over-the-top violence and profanity aplenty. But one detail that may come as a surprise to viewers is that there will be a bunch of nudity in the series. And that nakedness will be provided by just one person: Will Forte.

“It’s really funny because there were all these COVID protocols to keep everyone safe,” Forte revealed. “So I’m essentially kind of naked, but with a mask on.”

We’ll have to skip the spoiler-filled reasons when and why Forte is naked in the series and how it relates to the overall story being told. But, it is worth acknowledging Forte’s willingness to push his comfort aside to do what needs to be done. That’s a heroic work ethic, right there.

“For some reason, I’m kind of disconnected from the part of me that realizes then, down the road, that, Oh right, now I got to actually do this. Now I actually have to be naked. You know, it’s my own damn fault. A lot of times, I’ll pitch a lot of these horrible things that I have to do, but you just do whatever everyone thinks is the best thing. There definitely was some discussion. Is it going to be a pain in the butt to pull this off? There were definitely some discussions as to should I be getting clothes on earlier? It just made the most sense — for the story, and for what happens at the end of the episode — that I was just naked throughout.”