The stars and director of the new Shining sequel talk channeling King and Kubrick and the most terrifying moments from the original film.

As the world gets ready to check back into the Overlook Hotel with Stephen King’s Doctor Sleep, Rotten Tomatoes checked in with the stars and director of the Shining sequel for a set of extended interviews. Here, Rotten Tomatoes correspondent Naz Perez talks with Ewan McGregor, who plays the movie’s grown-up Danny Torrance, about channeling Jack Nicholson for the role, and to Rebecca Ferguson about creating an already-iconic horror villain in Rose the Hat. Plus, director Mike Flanagan reveals what it was like to bridge the gap between two heroes, Stephen King and Stanley Kubrick, and newcomer Kyleigh Curran, who plays a young girl seriously gifted with the Shine, opens up about working with McGregor (“Mr. Ewan!”). The cast and director also share their most terrifying moments from The Shining. 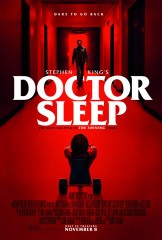