The Duffer brothers lean hard into horror for the new season. Plus, new photos, video teasers so far, castings, episode titles, and more clues about the fourth season of the horror-fantasy hit.

Production on the fourth season of Stranger Things was halted due to the pandemic back in March 2020, like so many other series. Luckily, filming started back up again in late September — which means that we’re going to get more from the Upside Down when the series returns in May.

But what is the new season going to be about, and who’s in it? Read on as we outline everything we know about season 4 of the Netflix hit.

UPDATED 4/12/22: Official season 4 trailer (above) debuts with a first look at the new big bad.

Every ending has a beginning 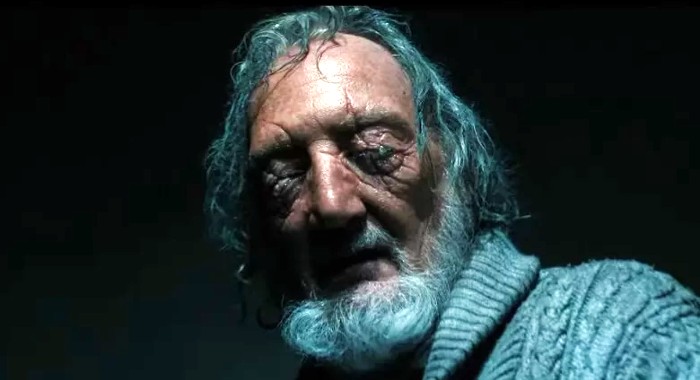 The official season 4 trailer for Stranger Things gives us a closer look at many aspects of the season we’ve already been clued in on. Eleven is living with the Byers in California and struggling to fit in with normal, teenage, high school life; Hopper is alive but being held captive by the Russians who have been conducting their own Upside Down–related experiments; and Robert England is here to add some horror movie gravitas to the scary season as the mysterious (and murderous) Victor Creel.

The new clip adds further fuel to the fire, giving a closer look at those story details while teasing Max’s storyline and introducing a new formidable villain. We see Max at her brother Billy’s tombstone, grieving over his sacrifice at the end of season 3. He was the Upside Down’s spy in Hawkins, so to speak, acting as a pawn to the Mindflayer’s sinister plan of world domination. With him gone, it’s looking like Max may be the new target. Will she gain the powers that Eleven lost? 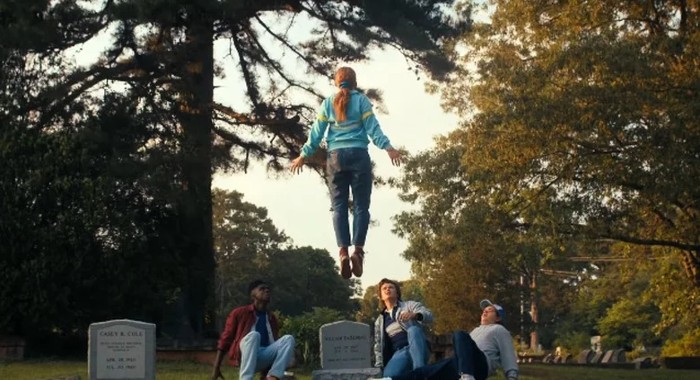 Speaking of, Eleven is powerless but, according to Sam Owens (Paul Reiser), there is a supernatural war coming and she is the key to humanity’s survival — hey, no pressure. As with the other tidbits, images, and trailers released over the past year, this new preview showcases a darker horror vibe to the series. With Journey’s 1983 hit “Separate Ways” playing ominously through the trailer, the biggest reveal is Vicna, the human-like hell-beast that will be at the center of this season’s chaos. His arrival brings an intriguing mix of Lovecraftian terror, ’80s horror (Hellraiser’s Pinhead comes to mind), and a Game of Thrones’ Night King–style aesthetic, to boot. 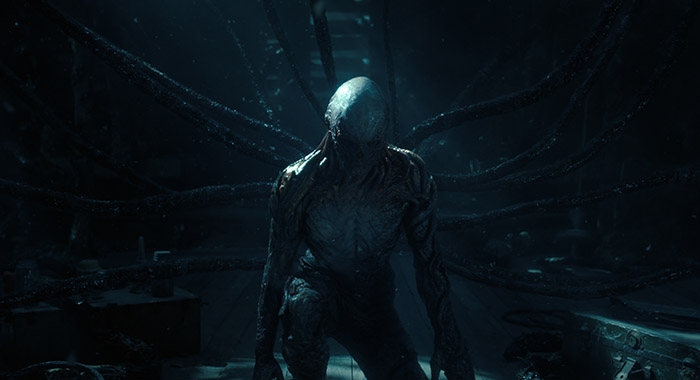 If anything, if previous Stranger Things seasons brought the Amblinesque wonder, season 4 will be delivering all sorts of nightmares.

The clip, which premiered during Netflix’s Stranger Things Day celebration, gives an uncharacteristically sun-drenched look at the usually gloomy-looking series. It’s been some time since Eleven, Will, Jonathan, and Joyce relocated to California. And finally, we’re getting a peek at their new home and the dangers looming on the horizon.

“We will have the best spring break ever,” Eleven’s voice exclaims over a clip of her writing a letter to Mike. But, things don’t look so great. After living in the Sunshine State for 185 days, she explains how well she has acclimated to her new surroundings. If that spitball she gets hit with is any indication, her new high school experience isn’t all sunshine and roses.

Aside from the difficulty in making new friends at school (and her excitement in reuniting with Mike and the gang), the teaser shows off a chaotic cavalcade of series moments: a creepy doll, gunfights, glammed-up roller skating, explosions, ominous men in suits, a covert underground base, a desert car chase, and so much more that promise an exciting new season.

Fans got a creepy new peek into Stranger Things 4 during TUDUM, the Netflix global fan event that took place on Saturday, September 25, 2021. The Duffer Brothers, along with actors Gaten Matarazzo and Joe Keery, welcomed audiences to the Creel House — a new locale that will provide some gruesome scares in the new season. The clip takes us back in time to the 1950s and gives us a look at the seemingly haunted house, as well as a tease at the origin story of Robert Englund’s Victor Creel (more on the casting below).

Flickering lights, dead rabbits, and ultimately, the bodies of Creel’s dead children appear, all set to the tune of “Dream a Little Dream of Me.” Did Creel go mad and murder his family? Or is this the work of the Upside Down? As things jump to the present day (that is, 1986), we find our group of Hawkins heroes, Steve, Dustin, Caleb, and Max — as well as a couple of companions we can’t quite make out — breaking into the rundown structure to look for clues. Is this another portal to the Upside Down? Seems so. With references to both Sherlock Holmes and Ghostbusters, the teaser is filled with an overall mysterious and eerie vibe, punctuated by a the ominous ticking of a rather sinister-looking grandfather clock. Honestly, would you expect anything less?

Season 3, which saw our favorite Hawkins, Indiana residents spend their summer like they spend the other seasons — defeating evil forces from another dimension, raising inter-dimensional beasts, and going to the mall — ended on quite a cliffhanger.

Spoiler alert (though why are you reading this article about season 4 if you didn’t watch season 3?): Although beloved police chief/foster dad Hopper (David Harbour) appeared to die sacrificing himself for the greater good at the end of the third season, Harbour is definitely returning to the series. The official Stranger Things Twitter account posted a video after filming began (way back in the beginning of March B.C. — before coronavirus), and Harbour’s face was the first to pop up (sporting a newly shaved head).

Who won’t be back: Billy, that lovely d-bag who proved his heart was good after all when he sacrificed himself to stop the Mind Flayer that was possessing his body all throughout the third season. Alexi, a.k.a. Hopper’s Russian hostage who was tragically killed, is also not likely to return (though we would not be mad if that Slurpee-lover popped up again somehow).

While it appeared that Hopper was incinerated in the season 3 finale when Joyce (Ryder) closed the gateway to the Upside Down that was hidden in the Russian bunker underneath the Starcourt Mall (with his approval, of course — it was the only way to ensure the safety of Eleven and the town of Hawkins), things might not have gone down the way it seemed. A mid-credits sequence in the finale showed two guards inside a Russian prison taking a prisoner from his cell to feed to a Demogorgon, making sure he was “not the American.”

But after Harbour confirmed his return with a Valentine’s Day video featuring Hopper working on a railroad track in a snowy Russian gulag, series creators Matt and Ross Duffer confirmed that Hopper is the American in question.

“It’s not all good news for our ‘American’; he is imprisoned far from home in the snowy wasteland of Kamchatka, where he will face dangers both human… and other,” the brothers confirmed in a press release. “Meanwhile, back in the states, a new horror is beginning to surface, something long buried, something that connects everything… Season 4 is shaping up to be the biggest and most frightening season yet, and we cannot wait for everyone to see more. In the meantime — pray for the American.”

how it started how it's going pic.twitter.com/ylNmU2sGRu

Back in Hawkins, it appears the kids might be getting back into Dungeons and Dragons, as some of the footage released via the official social media accounts shows dice rolling and Keery carrying a flag for the “Hellfire Club” that includes some 20-sided dice.

Adding to the initial reveal that “The Hellfire Club” is the title of the first episode, Netflix unveiled all nine episode names during 2021’s Stranger Things Day event:

Since originally being released via the official Stranger Things writers’ Twitter account a year ago, the titles of each episode have been given a bit of an overhaul.  Gone are episode names “Tick Tok Mr. Clock,” and “You Snooze You Lose.”

Who Will We Meet? 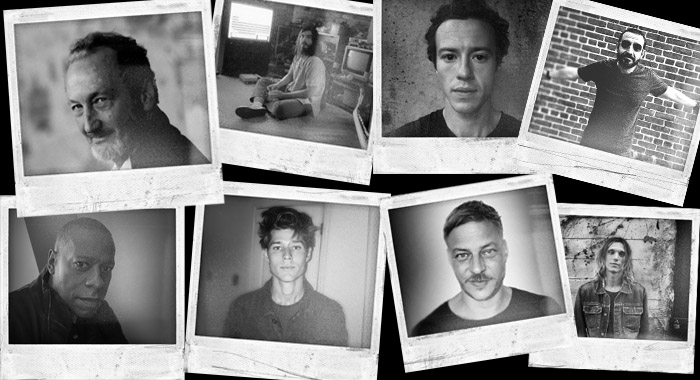 A bunch of new characters are joining the fray, including:

Just How Scary Will Things Get? 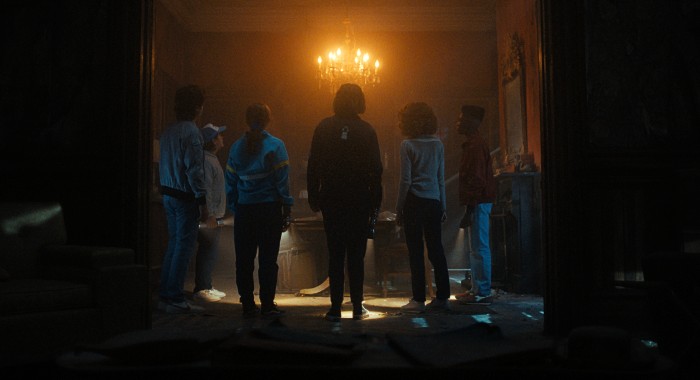 We already know genre icon Robert Englund will appear in the new episodes, lending to the darker, spookier feel of the season. But just how scary will things get? According to Netflix: Tudum, the Duffer Brothers’ upcoming appearance on the streamer’s Present Company With Krista Smith podcast shed light on the new season’s dark tone.

“When we pitched it to Netflix all those years ago, we pitched it as the kids are…The Goonies in E.T.,” revealed Ross. “That’s their storyline. And the adults are in Jaws and Close Encounters and then the teens are in Nightmare on Elm Street or Halloween. But, this year, we don’t have the kids. We can’t do The Goonies anymore. And so, suddenly, we’re leaning much harder into that horror movie territory that we love. It was fun to make that change.”

On Wednesday, March 23, Netflix released a handful of new photos to support the Duffer brother’s statement. 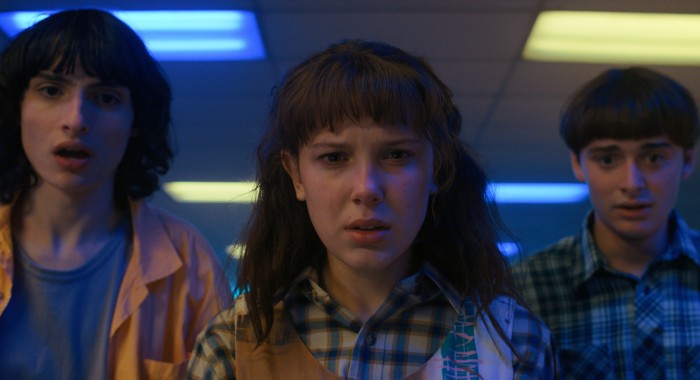 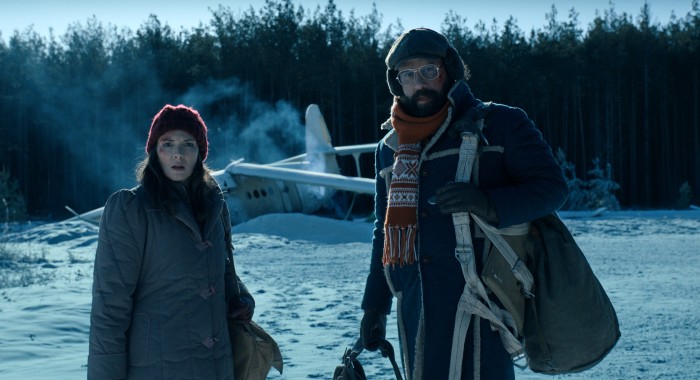 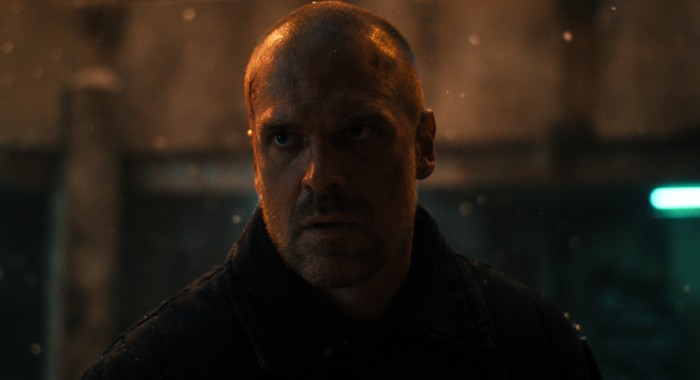 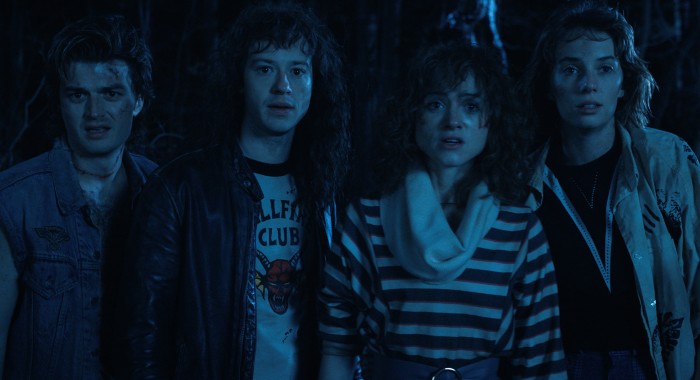 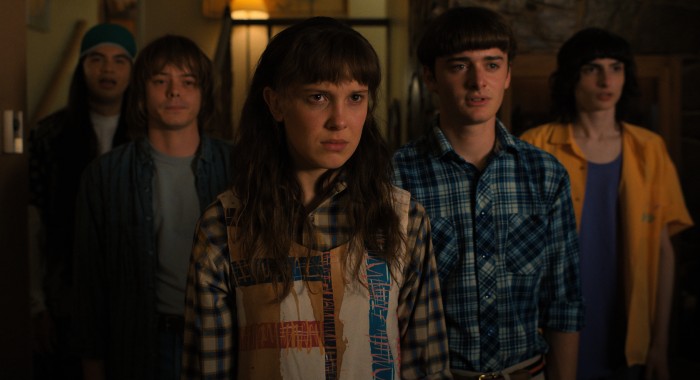 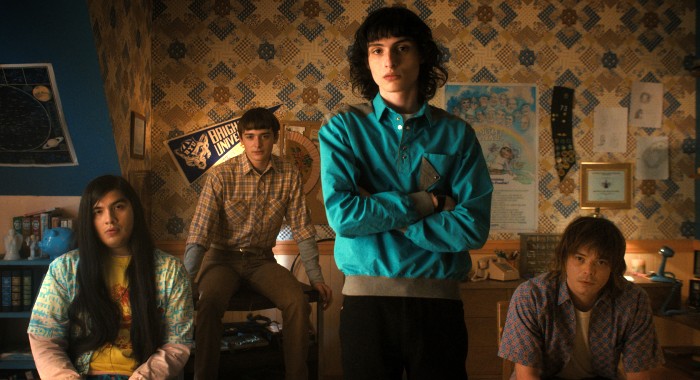 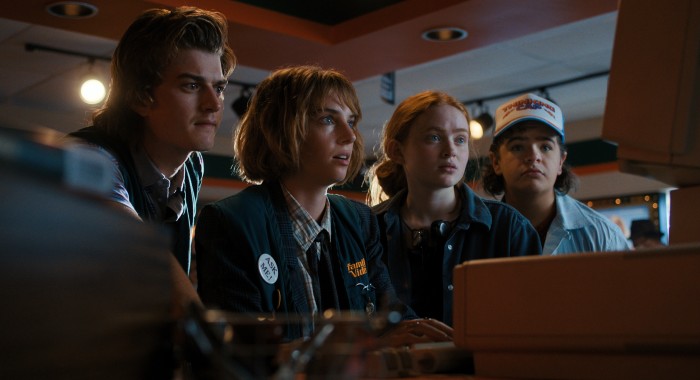 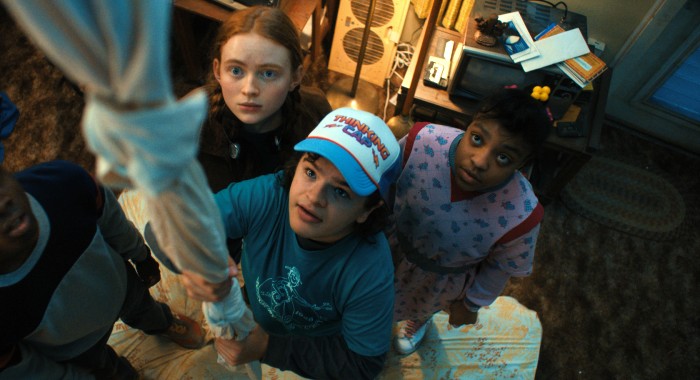 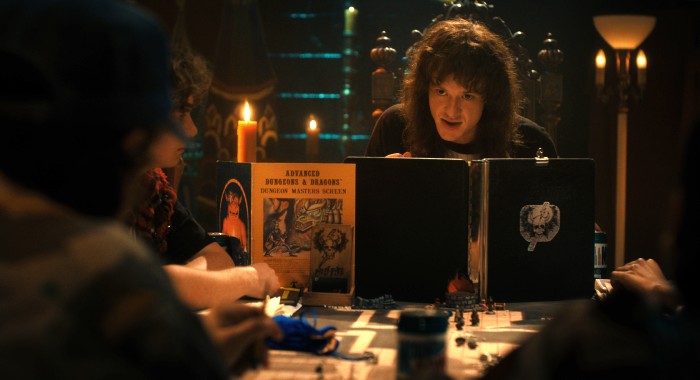 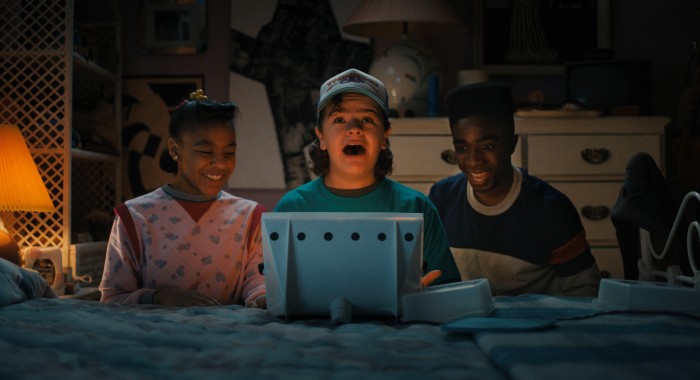 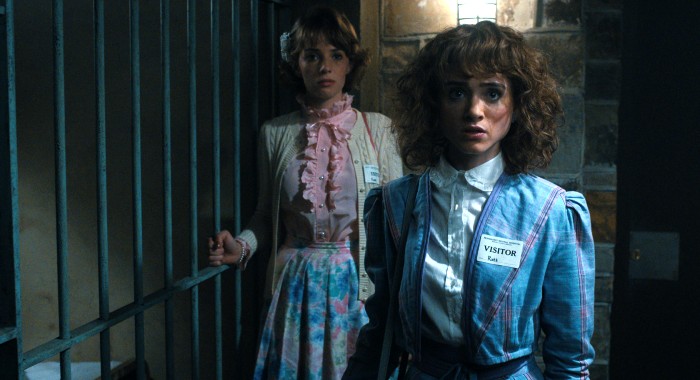 When’s It Coming Back and Will There Be More? 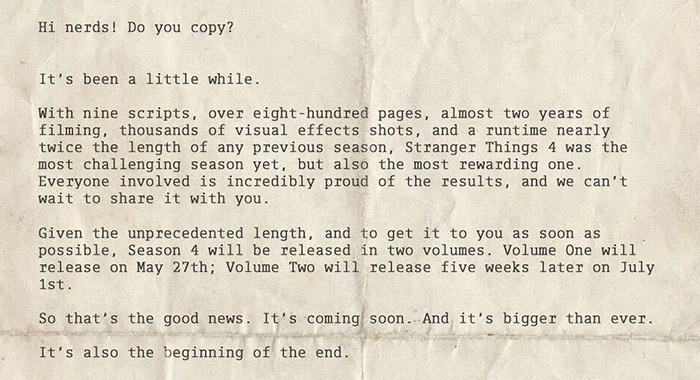 Click image to open full statement in a new tab.

On Thursday, February 17, the Duffers released a statement updating fans on what to expect from season 4, when to expect it to drop, and gave further insight on when this Stranger Things story will end.

The first “volume” of season 4 will arrive on May 27 with the second dropping on July 1, and the series will end with season 5.

“Seven years ago, we planned out the complete story arc for Stranger Things,” the statement reads. “At the time, we predicted the story would last four to five seasons. It proved too large to tell in four, but — as you’ll soon see for yourselves — we are now hurtling towards our finale. Season 4 will be the penultimate season; season 5 will be the last.” 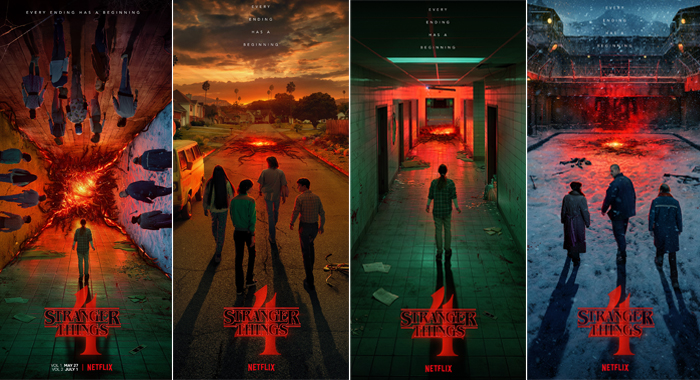 Netflix also released four teaser posters with the announcement. (Open posters larger in a new tab, from left to right above: 1 | 2 | 3 | 4.)

There had been plenty of speculation that the fourth season of Stranger Things would be the last — especially since the young actors definitely don’t look like middle schoolers anymore.

“Season 4 won’t be the end,” Ross Duffer  had told The Hollywood Reporter previously. “We know what the end is, and we know when it is. [The pandemic-induced shut-down] has given us time to look ahead, figure out what is best for the show. Starting to fill that out gave us a better idea of how long we need to tell that story.”

What’s Up With This Eleven Teaser?

Netflix released a new (mysterious, of course) teaser in May 2021 hinting at some previously unrevealed information about season 4.

The minute-long clip focuses on Eleven, featuring what appears to be a flashback of the facility where our favorite superpowered teen was raised. As the clock strikes 3 (you’ll recall we know episode 2 was titled “Tick Tok Mr. Clock”), children play games (including what looks like Demogorgon chess) in a medical/science-type facility. A Magic 8-Ball reads “signs point to yes” and a Plinko game with discs that landed on numbers 4, 7, and 8. A man says, “Good morning, children” as the camera pans to a door with “11” on it — and our Eleven (played by Brown), startled, opens her eyes.

- - will be released on Netflix in two volumes: The first half drops on Friday, May 27, and the second will come five weeks later, on Friday, July 1. 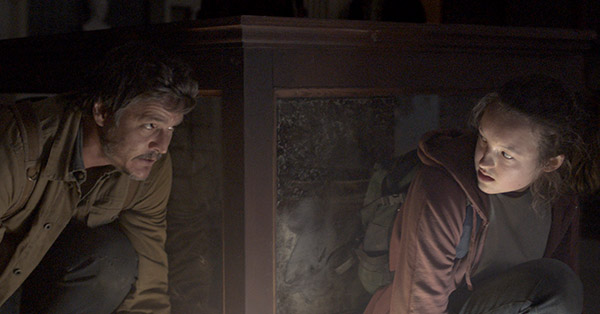