See the full list of the night’s winners here, but the year’s top winners overall were:

Here are five of the biggest surprises and moments from Sunday’s ceremony and what social media observers had to say about the results. 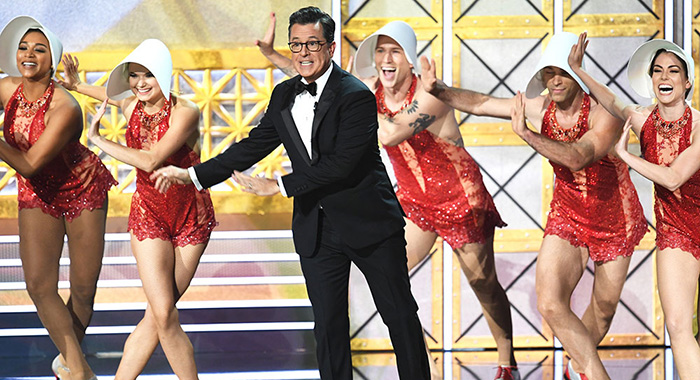 Host Colbert kicked the program off with a cameo-filled musical number (including a verse by Chance the Rapper, who urged viewers to record their shows and be politically active) followed by a similarly themed monologue meant jokes about Hollywood, the TV industry, and yes, politics, including an appearance from a former White House player that caused jaws to drop.

Can I just say Steven Colbert is the best host ever for making that opening Emmy speech.

YES to @chancetherapper 's meta rap in the Emmy's opening number: TV is distraction but what about some action??? #TheEmmys

Can that opening segment win an Emmy? #Emmys

Colbert’s Daily Show background means he never steers clear of politics, and after a politically charged opening musical number and monologue, he brought out a major surprise: former White House spokesperson and SNL subject Sean Spicer. And yes, it was kinda awkward for Melissa McCarthy, who won an Emmy for playing him at the Creative Arts Emmys last weekend.

Sean Spicer coming out on stage to mock himself (and basically Trump) during the Emmys is the greatest moment in TV history?? #EMMY2017

Not only did Glover take home an award for Outstanding Directing For A Comedy Series — the first African-American person ever to do so — for an episode of Atlanta, he also won for Outstanding Lead Actor in a Comedy.

donald glover is one of the most talented people alive #Emmys

DONALD GLOVER IS AN EMMY WINNER! ATLANTA SHOULD WIN ALL THE EMMYS. #Emmys pic.twitter.com/Yqmq6Du4F2

Donald Glover won an Emmy for best directing and best acting tonight and I just can't comprehend how one person is so talented.

I feel like Dave Chappelle handing Donald Glover his Emmy, made his win even more epic #Emmys #BGNEmmys pic.twitter.com/Rv5BiEwm4B

Both Dowd, a first-time winner, and McKinnon, who took home the trophy last year, were so overcome with emotion (and seemed to be in disbelief of their wins) that they were in tears throughout their (still-eloquent) speeches.

Ann Dowd just Won an #Emmy for #HandmaidsTale . Her speech was so tender and authentic , she brought tears to my eyes .congrats Ann and MGM

My favorite actress in the world @anndowd just won a damn Emmy!! Thrilling!!!

This is what a well-deserved exhale looks like. #TwoTimeEmmyWinnerKateMcKinnon pic.twitter.com/e4aiLS1B9J

The Seinfeld star is already a TV icon, but by winning her sixth consecutive Emmy for Veep, Louis-Dreyfus broke the record for most Emmys won by a single actor for one role. (The previous record holder was Candice Bergen for Murphy Brown).

The last time Julia Louis-Dreyfus didn't win an Emmy was in 2011. She is the Lebron James of television.

As a wrap gift for the final season of Veep, Julia Louis-Dreyfus is giving one of her Emmy's to each member of the cast and crew

No one else is ever going to win an Emmy for Comedic Actress as long as Julia Louis-Dreyfus is on television. #Emmys

The Handmaid's Tale was the best show I've watched this year so far, and that includes Patriot, Shameless, Fargo FX, and Better Call Saul.

"Veep"! "Big Little Lies"! "The Handmaid's Tale"! And I just folded the laundry in the dark! So lots of big wins tonight for the ladies!

Adding to the female milestones was Lena Waithe, the first black woman to win for Outstanding Writing for a Comedy Series. Waithe shared the award with Master of None co-writer Aziz Ansari for the episode “Thanksgiving.”