The action star's unique wrestling-centric childhood was perfect subject matter for a comedy series. Plus, Kenan Thompson on balancing SNL with sitcom Kenan, and more from NBC's winter 2021 press day. 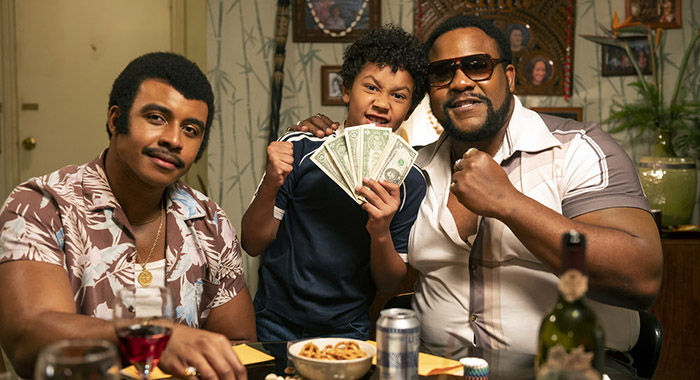 Four different Rocks discussed the new NBC sitcom Young Rock, inspired by the life of wrestler-turned-national treasure movie star Dwayne “The Rock” Johnson in a virtual press conference on Tuesday. The panel for the series was a part of the Television Critics Association winter press tour, the semi-annual event where TV networks present their upcoming series to reporters.

Read on for more about Young Rock, plus details on the two other series NBC introduced on Tuesday, Kenan Thompson sitcom Kenan, and the sci-fi drama Debris.

Young Rock started with a fanny pack. You know the photo — the one of a young, smirking, turtleneck-clad Dwayne Johnson leaning against a wall with his thumb curled under a stylish fanny pack.

“That was the entire pitch,” the actor joked when asked about his inspiration for the series. In reality, though, the show is about his very unique upbringing — and it’s not something he entered into lightly. When he first sat down with executive producers Nahnatchka Khan and Jeff Chiang to discuss the show, it was to ask, “What’s the real reason of why we’re going to do this? How can we create something for audiences that will hopefully entertain them, but also allow them … a bit of takeaway afterwards?”

It was only after they came up with a clear point of view that the show became a reality, Johnson explained.

“We use these terms ‘wild’ and ‘crazy’ — those are great sizzle words we use as we promote this thing. But it was incredibly complicated and incredibly tough growing up, specifically with these timelines in my life of 10 years old, 15, and 18. Universe willing, if we’re lucking enough to come back for another round of this thing, there’s a lot of other things that took place in between,” he said.

Johnson is both executive producer and star of the series, appearing as a future version of himself (a 2032 presidential candidate). The show takes place during four different time periods, with Adrian Groulx starring as 10-year-old Dwayne Johnson, Bradley Constant as a 15-year-old version, and Uli Latukefu as the 18-year-old Rock. Young Rock also portrays of famous early wrestlers, including Andre the Giant, Randy Savage, Iron Sheik, and Junkyard Dog, which is not unexpected, since Johnson grew up wrestling royalty as the son of WWE champ Rocky Johnson, who is played by Joseph Lee Anderson in the series.

“It was truly a love letter to professional wrestling, which is a business that I grew up in and a business that I’ve loved all my life and learned some of my most valuable, while very unorthodox, lessons,” Johnson said. It was a pleasure “to be able to highlight and showcase these men who were, in essence, my superheroes — they didn’t wear capes when I was a little boy.”

But when it premieres on February 16 on NBC, the show will follow a widowed actor–turned–morning show host as he raises his two daughters with the help of his father-in-law (played by Don Johnson) and brother (SNL castmate Chris Redd). The lengthy development of the series, Thompson said, allowed the team time to figure out “how to put a new twist on the ‘uplifting father figure’ kind of show.”

Thompson and Redd are filming the sitcom concurrently with SNL. While cast members previously would have to leave the late-night comedy sketch series or film in the summertime if they wanted to pursue other creative pursuits, the TV world (and specifically the SNL universe) is a little more flexible than it used to be, they said.

“I think we’re living in a different time,” Thompson said. “There was a time when people would leave the show to go into their career. But I’m of a different kind of thinking. I think you can do both as long as you can, then if the departure comes in a natural way then so be it.”

Redd also said he wasn’t thinking of the show as some kind of SNL “exit strategy.” Said the actor, “I just see it as an opportunity to create.”

The title of NBC’s new sci-fi drama Debris, premiering March 1, is literal — each week, two intelligence agents hunt extremely powerful shards of an alien spaceship that bestow fantastical powers on their possessors, from walking through walls to manipulating the weather.

The weekly component will be complemented by a larger mystery — sound familiar? The series comes from former Fringe showrunner and Almost Human creator J.H. Wyman.

“You can have a case of the week, but you can also have meaningful character development and the mythological rollout over the course of at least this first season,” Wyman told reporters in the show’s virtual session.

A CIA agent played by Jonathan Tucker and an MI-6 agent played by Riann Steele are the investigators at the center of the series. The duo work together as a part of the U.S.-U.K. collaborative agency Orbital to recover as many pieces as possible before others can use them for nefarious purposes. And while each new UFO scrap they discover will provide a weekly through-line for the series, it’ll also show the unique capabilities of the alien matter and how it affects the world, Tucker said.