Director Garth Jennings on Son of Rambow: The RT Interview

We catch up with one half of Hammer & Tongs.

Garth Jennings, together with business partner Nick Goldsmith, is part of the successful creative double-act Hammer & Tongs. Beginning, as many feature filmmakers do these days, in the world of music videos, creating memorable short films for the likes of Blur and R.E.M., the pair burst into feature film with about as ambitious a project as one could imagine: Disney’s 2005 big-screen version of Douglas Adams‘ Hitchhikers Guide to the Galaxy.

Four years later and they present their follow-up, on a decidedly more pint-sized scale, Son of Rambow is a tribute to the sort of carefree youth film fans know only too well, as nippers Will and Carter take to the woods after a viewing of First Blood and decide to make their own sequel. A huge hit at Sundance, the film is out now in the UK and will find a release in the US on 2nd May and in Australia on 4th September. RT caught up with Jennings to find out more about the film, and how a certain other movie this year has had its own impact…

When we spoke to you about Hitchhikers three years ago, you were talking about this movie then…

Garth Jennings: Yeah, we were trying to get it made when we started Hitchhikers, and when you get offered a job like that you can’t not do it. Getting a chance to do a big movie that you love so much is the chance of a lifetime so we put this on hold and came back to it.

What was it about this idea that so excited you?

GJ: When Nick and I were first discussing the idea, it was kind-of funny the idea of kids making their own action movie. We all used to do it as kids. But there’s that thing, as well, of thinking back to that age when you have no fear and no concern for the consequences of your actions whether they’re dangerous or stupid or cruel, you know. You just kind-of go for it.

“When you see First Blood way before you’re supposed to be seeing it, you think this is the coolest thing you’ve ever seen.”

There’s a lovely, uplifting feeling about trying to capture that and that’s what we were trying to do, really, with Son of Rambow. Before we’d really worked out the plot we had this mission to make the film that made us feel like we used to do. It was never going to be slavish to reality – it was always going to be a romantic view of that time. Stand By Me has a similar sort of thing where it’s all heightened and they’re dodging big trains and it’s a little fantastical, but it’s got such a lovely feeling about it and even though I didn’t grow up in that period, that coming-of-age story is universal and timeless.

This particular coming-of-age story is also quite special for anyone who discovered film as a kid, because this is what we were doing.

GJ: Most of the fundamental influences come at that age. Whether they’re positive influences or negative ones they come around those formative years and when you see First Blood way before you’re supposed to be seeing it and you live on the edge of a forest you think this is the coolest thing you’ve ever seen. This man has a knife and a stick, he can sew up his own arm, he can do everything including take on 200 guys. I loved it.

GJ: Yeah, and having friends that you can do that with. It’s harder to keep that when you get older – things change, things become more serious, it’s about looking cool and all that sort of stuff. There’s this lovely window before all of that kicks in where you’re really uninhibited and you really can do anything you like. It’s sort-of lovely and you don’t even realise it when you’re going through it. It’s only after that you remember and you go, “That was brilliant.” We did whatever we wanted – eating as much ice cream as we wanted and making as many silly movies as we could.

You haven’t even got to the point where people are saying, “You have to pass this exam and if you don’t pass this exam you won’t work and if you can’t work you’ll be miserable.” You’d have said, “No, I’m going to make things like this for the rest of my life.” What more does there need to be to life, apart from making trenches in the forest and living there for a few days?

Did you get the opportunity to regress while you were making the film?

GJ: Not really, the regressing bit happens while you’re writing because you’re trying to remember what you’d have done in the situations you’re writing, but as soon as you start making it you’re right into, “We’re running out of time people! Let’s get a move on!” There’s no time to stop and soak up how it used to be! 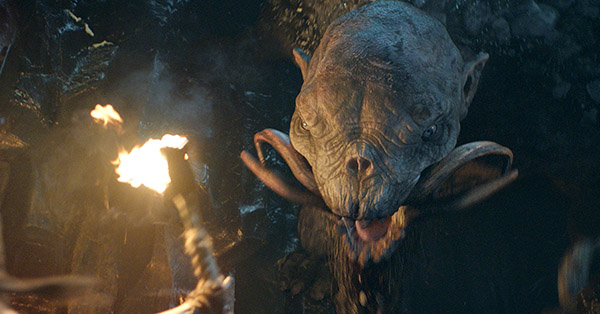