Comic-Con 2020: All the Trailers For Movies and TV Shows

All the first looks and new trailers for movies and TV we can get our hands on, as they drop.

Just like everything else in 2020, Comic-Con was on the verge of being cancelled, but that was before it pivoted to an entirely online, at-home-for-you experience. While you can’t expect the same blitz of raucous Hall H audience reactions and robust cosplay galleries, the panels must go on, along with all the trailer drops. See all the movie and TV trailers from Comic-Con here, updated as they come in!

Searchlight Pictures released the final trailer for Antlers, produced by Guillermo del Toro and directed by Scott Cooper. It offers a glimpse of the Wendigo, the Native American myth that plagues Keri Russell in her small town.

Antlers also shared an inside look at its main creature, the Wendigo. Watch Native American consultants explain the culture and meaning behind the creature, while producer and creature expert Guillermo del Toro chimes in too.

Disney+ released a clip from Phineas and Ferb The Movie: Candace Against the Universe featuring Candace singing “Such a Beautiful Day.” The catchy song, including it’s headbanging metal interlude, is sure to be stuck in your head until the movie comes out.

Phineas and Ferb The Movie: Candace Against the Universe premieres August 28 on Disney+

To coincide with the New Mutants panel at Comic-Con, we got a new teaser trailer showcasing the characters’ individual powers and the horror aesthetic of the film.

Director Josh Boone and stars Maisie Williams, Anya Taylor-Joy, Charlie Heaton, Alice Braga, Blu Hunt, and Henry Zaga were on hand for the New Mutants panel on Thursday, and towards the end, they debuted the first two minutes of the film in a sneak preview clip.

Keanu Reeves and Alex Winter reunite for this third installment in the Bill & Ted series, almost 30 years after Bill & Ted’s Bogus Journey in 1991, as Bill S. Preston, Esq. and Theodore “Ted” Logan are once again visited by a traveler from the future, this time to warn them that they must create a new song to save the world in 78 minutes.

HBO released a clip of their new series Lovercraft Country. In the scene, Michael K. Williams, Jurnee Smollett and Jonathan Majors investigate a darkened chamber. Williams reads the inscription, “Beware all ye who tread the path, ever the tide shall rise.” Ominous words for the new horror drama.

Disney+ released a clip from its National Geographic miniseries The Right Stuff. The Tom Wolfe book about the first astronauts became a movie in 1983. Disney+ will give the story more hours of streaming time. The clip shows Alan Shepard (Jake McDorman) race to the first Mercury Space Program meeting.

Coming this fall to Disney+.

For All Mankind was one of the first original shows Apple TV+ launched in November, along with The Morning Show, See and Dickinson. It takes place in an alternate history where the U.S. lags behind Russia in the space race. The trailer for season two promises more scenes on the moon as U.S. astronauts battle cosmonauts, and more aerial dogfights in Earth’s atmosphere.

For All Mankind season two is coming soon to Apple TV+.

Adult Swim shared an early look at the new season of Rick and Morty, and when we say early, we mean the animation isn’t finished yet. The rough sketches show Morty (Justin Roiland) carrying a bleeding, dying Rick (Roiland). They escape a hostile planet and get a peek at their badass adventures in an alternate universe. In his last moments, Morty gets some news that makes him want to survive, but his landing only makes matters worse.

Fox released the trailer to their cyber-thriller NeXt. John Slattery plays a tech giant who teams up with Cyber Crime Task Force against an artificial intelligence out of control. The A.I. called NeXt is using smart cars, drones and hospital monitors to take out its enemies. It also makes Slattery’s character more than a little paranoid.

NeXt premieres October 6 on Fox.

Season 11 premieres on September 16 on FXX.

Tom Austen and Sydney Lemmon star in this dark fantasy series based on the Marvel comics characters, about a pair of siblings who are the children of a serial killer and “hunt the worst of humanity.” Austen, Lemmon, and co-stars Elizabeth Marvel, Robert Wisdom, Ariana Guerra, and more were on hand during their Comic-Con@Home panel to offer a preview of the upcoming new series.

Season 1 premieres on October 16 on Hulu.

Fear the Walking Dead is set to premiere on AMC on October 11 for its sixth season, and stars Lennie James, Alycia Debnam-Carey, Colman Domingo, and Rubén Blades were among the cast members who participated in the show’s Comic-Con@Home panel on Friday. Together they introduced a new trailer, offering glimpses of what has happened to the main characters after being separated across several settlements at the end of Season 5.

Season 6 premieres on October 11 on AMC.

The panel dedicated to The Walking Dead chose to focus on its upcoming Season 10 finale episode, “A Certain Doom,” with Norman Reedus, Melissa McBride, Jeffrey Dean Morgan, and Lauren Cohan among the cast members who made an appearance to talk about the final battle of the Whisperer War. During the panel, they also previewed the first three and a half minutes of the episode to help drum the anticipation.

The Season 10 finale airs on October 4 on AMC.

The third and final Friday panel from the world of The Walking Dead focused on its latest spinoff series, The Walking Dead: World Beyond, which follows a group of teens who are the first generation of children to be born and raised during the zombie apocalypse. We’ve already gotten a smattering of sneak peeks and teasers for the new show, but we got a new trailer from the panel featuring footage we haven’t seen before.

Season 1 premieres on October 4 on AMC.

The first half of Vikings’ sixth season already premiered back in late 2019, but the second half is set to debut later this year on The History Channel. During Friday’s Comic-Con@Home panel, cast members Michael Hirst, Travis Fimmel, Katheryn Winnick, and more talked about their favorite moments and fan interactions, and then premiered a preview clip from the latter half of the season.

The second half of Season 6 premieres Fall 2020 on The History Channel.

Season 1 premieres on August 16 on HBO.

Amazon Prime’s hit superhero satire returns for a second season on September 4, but they’ve provided a preview clip titled “The Whale” in which we see Billy, Hughie, and co. square off against the Deep and… his whale.

This supernatural comedy series co-written by and starring Simon Pegg and Nick Frost centers on a team of paranormal investigators who become embroiled in a frightening conspiracy as they begin to uncover a string of unusual supernatural phenomena.

This animated comedy series from the Star Trek franchise and aimed at an adult audience follows the support crew of the U.S.S. Cerritos, “one of Starfleet’s least important ships.” Created by Mike McMahan (Solar Opposites), the series features the voices of Tawny Newsome, Jack Quaid (The Boys), and Noël Wells (Master of None), among others.

Guillermo del Toro’s Tales of Arcadia trilogy of Netflix series all take place in the small fictional California town of Arcadia Oaks, where young heroes secretly do battle with supernatural enemies. The final series, which focuses on, well, wizards, follows Colin O’Donoghue’s Douxie and his friends as they time-travel back to the days of Camelot to fight in an apocalyptic battle. Emile Hirsch, Steven Yeun, Clancy Brown, Mark Hamill, and Lena Headey are among the returning voice cast, while Alfred Molina, Stephanie Beatriz, and John Rhys Davies join for the new season.

Gillian Flynn, the best-selling author behind Gone Girl and HBO’s Sharp Objects, brings a new take on the British conspiracy drama series of the same name to Amazon Prime. Jessica Rothe (Happy Death Day), Sasha Lane (American Honey), John Cusack, and Rainn Wilson are among the stars of this thriller that focuses on a group of comic fans who discover their favorite fictional series might not be so fictional after all.

HBO’s fantasy series based on the popular best-selling novels of the same name returns for its second season with new cast members Andrew Scott, Jade Anouka, and Simone Kirby, as Lyra (Dafne Keen) follows Lord Asriel (James McAvoy) to a new world and meets a new friend in an abandoned city. 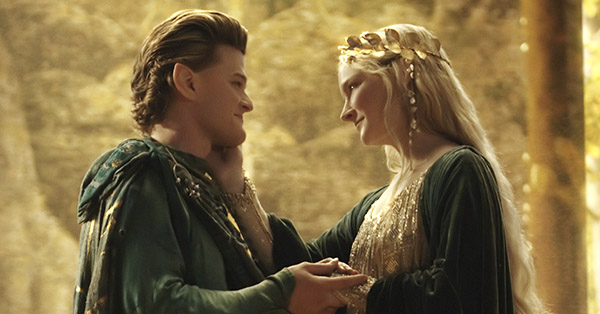