The actress discusses her nearly four–year obsession with Griselda Blanco and her support of the #MeToo and Time's Up movements. 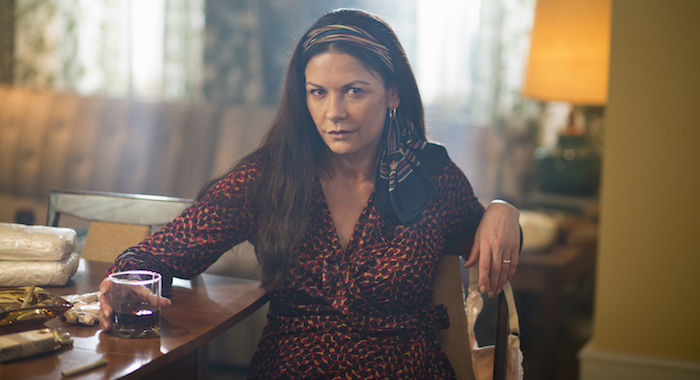 Oscar winner Catherine Zeta-Jones (Chicago) is the latest movie star taking a turn on TV, and the role — as a Colombian drug kingpin in the Lifetime film Cocaine Godmother: The Griselda Blanco Story — finds the actress at her most gritty. Zeta-Jones spoke to Rotten Tomatoes about what attracted her to the role and addressed an interview her husband Michael Douglas gave to Deadline about sexual harassment accusations against him.

Zeta-Jones as Griselda Blanco is the actress like you’ve never seen her before. She first learned of Blanco in the 2006 documentary Cocaine Cowboys. There were only still photographs of Blanco in the documentary, but interviews with others conveyed her legend.

“She was feared, revered,” Zeta-Jones said. “It was fascinating to me that this woman was ruling the roost, running the big boys. She was very powerful in that world. She retained that power for so long when everybody wanted her dead. She dodged life in prison through technical details, and then gets assassinated by her own way of gunning people down with the drive-by.”

As Cocaine Godmother shows, Blanco invented the drive-by shooting with her motorcycle assassins. She also developed ways to hide drugs — in women’s underwear and shoes and false-bottom suitcases — that fans of gangster movies (and the real DEA) take for granted now. 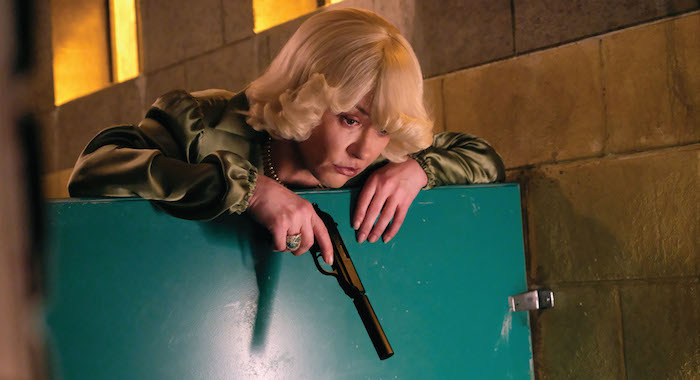 “She was sexy because she was dangerous,” Zeta-Jones said. “These men found her sexy because she was dangerous. You don’t get more dangerous than a Colombian woman running the show in Miami, the birthplace of the Colombian drug cartels. And the fighting between the Colombians and the Cubans; we’re talking about drug dealers against drug dealers, DEA against [cartels]. It was chaos; the Dade Massacre, the drive-bys, the killings, the dismembering. It was like a war zone there, and this was where old people used to go to retire.”

Blanco was not only dangerous for her deadly stranglehold on the drug-smuggling business; she also seemed to tempt fate. She named her son “Michael Corleone” (Dagan Nish), and Zeta-Jones’ research found she had a dog named Hitler too. Hitler did not make it into the movie.

“So there was a sick sense of humor,” Zeta-Jones said. “I’m sure her kids were accessories like a handbag; choose one for each day.” 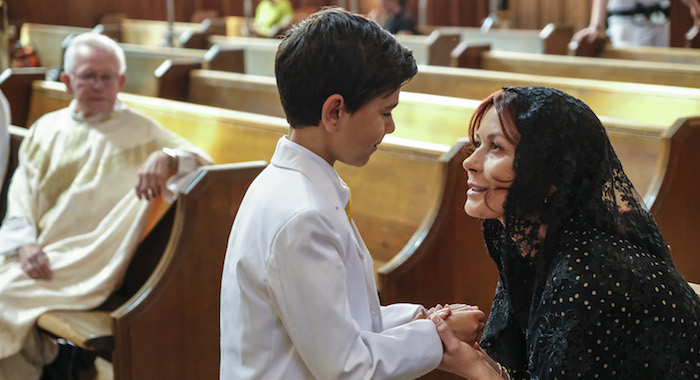 Research uncovered one piece of film of Blanco, and Zeta-Jones could tell she was performing for the cameras.

Cocaine Godmother does not try to justify, sympathize with, or redeem Blanco, nor does Zeta-Jones.

“No, there are no excuses for Griselda,” she said. “There’s no redeeming quality to Griselda. That’s why she’s brilliant to play. All those things about Griselda that I detest, I admire her strength of audacity to be able to succeed that long in a man’s world. She did the false-bottom cases, the hiding [drugs] in the heels of the shoes, creating mules to do the work — pretty girls, models, anything. She was smart. You’ve got to applaud her for that, if anything.” 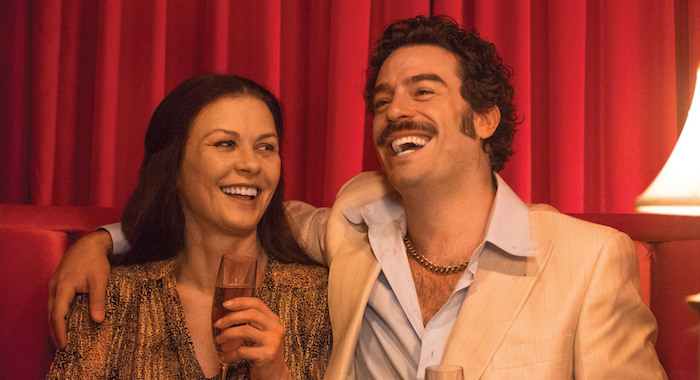 A frequent visitor to Miami, Blanco’s American headquarters, Zeta-Jones often heard the locals talk about Blanco. Now she can call B.S. on a lot of their tall tales, since she’s an expert on the subject.

“I go now to Miami, I talk about Griselda Blanco in a car going somewhere (from the airport or something), everyone [says they] knew somebody who knew or worked for Griselda Blanco,” Zeta-Jones said. “All of a sudden it’s like everyone knew Griselda Blanco. Nobody did. The DEA were trying to track her down for years. She just was so smart. For somebody who never went to school, she could barely read and write, she was able to do that.” 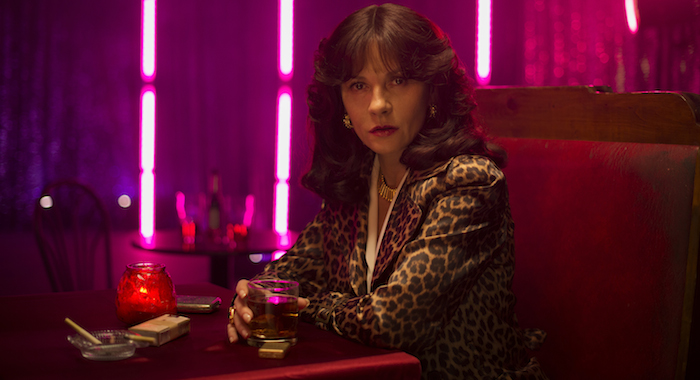 Douglas and Zeta-Jones usually stay out of each other’s performances, but for this one, Douglas knew one personal quality that would be very useful in playing Blanco. He said, “You are at your most terrifying when you do nothing,” Zeta-Jones shared.

“My kids tell me that I have a look that I do which I don’t know [I’m doing], and that’s the serious look,” Zeta-Jones said. “They used to call it the Griselda look while I was shooting Griselda. She always had that look. That was so funny that note with Michael because I genuinely didn’t know, and he was really serious. He wasn’t making a joke of it. I used it in those moments of me going, ‘Oh gosh, what am I going to do here with this? There are so many ways I could go. I could go this way, I could go that way. Why don’t I just do this? I’m going to scare them with nothing.’” 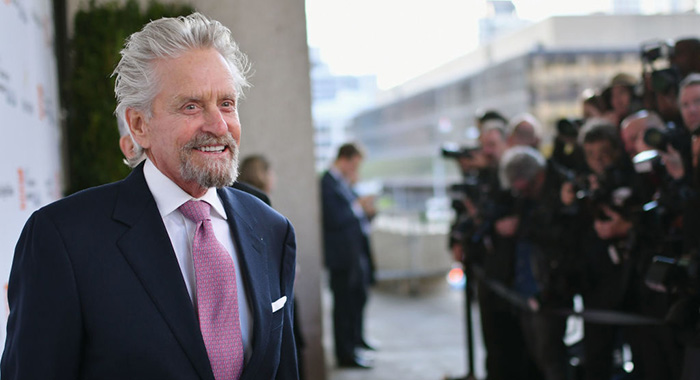 Before Rotten Tomatoes spoke to Zeta-Jones, Douglas gave a interview to Deadline in which he said he “felt the need to get ahead of” sexual harassment accusations by former employee Susan Braudy, a journalist and author,  that have since been published by The Hollywood Reporter.

Douglas’ interview was published only days after Zeta-Jones wore black in support of Time’s Up at the Golden Globes. In this interview, the actress restated her support of #MeToo and Time’s Up and said Douglas’ decision to speak had the desired effect.

“It’s been very positive, extremely positive,” Zeta-Jones said. “Unfortunate that he had to make a statement, but it was essential that he do that. There was no other choice.

“I just want to instill how much we are, and I am, of course, 100 percent behind this movement — it’s been a long time coming — and so is my husband,” she continued. “My husband has a fantastic track record of creative-women empowerment and [with] women in his business: working with them on screen, producing with them, alongside them. His mother was an actress, I’m an actress — [but] not just actresses, women in general. Us as a family, we really want to say how much we support this movement, absolutely.”

Asked if she felt caught between supporting the movement and standing by her family in this situation, Zeta-Jones said she did not. 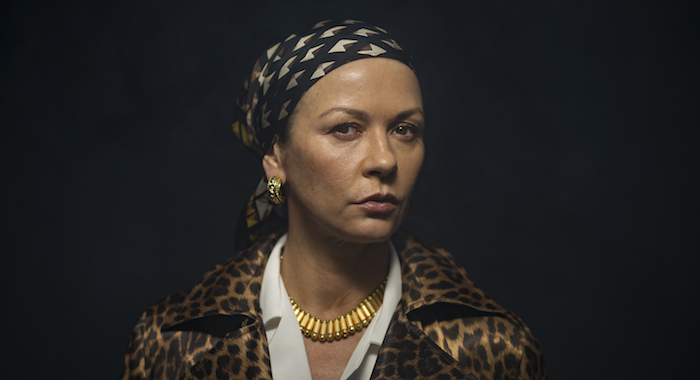 The premiere of Cocaine Godmother will be the end of a three-and-a-half-year journey for Zeta-Jones in developing The Griselda Blanco Story. Even though she wrapped filming on July 4, Blanco has stayed with her, she said.

Zeta-Jones said she expects to feel closure once she shares Griselda Blanco with the world.

“It’s all coming to a glorious natural end,” she said. “Once it airs, it’s out there, and then I can give it away.” 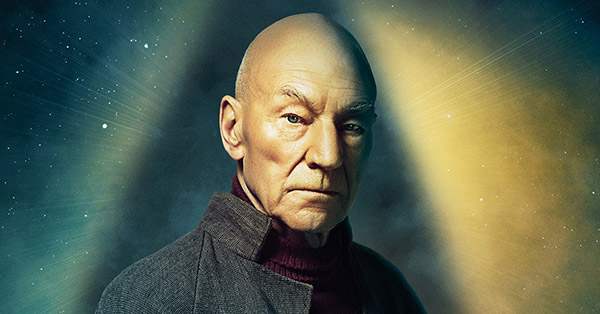 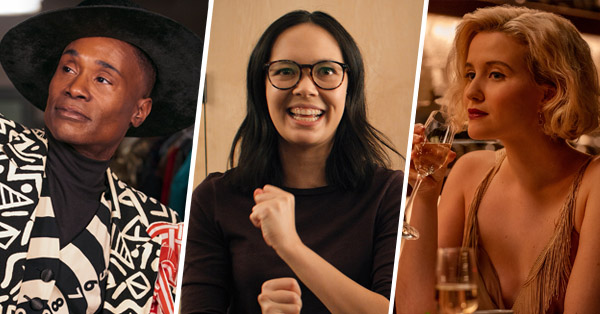