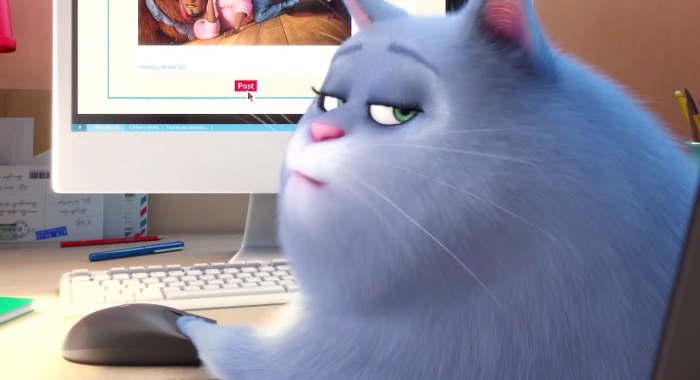 People sure do love pets. Universal clobbered the North American box office with the colossal opening for its new animated comedy The Secret Life of Pets which exceeded industry expectations to capture an estimated $103.2M over the weekend. It was the sixth largest debut of all-time for an animated film, and the best ever for an original toon beating the $90.4M of last summer’s Inside Out.

Led by a stellar voice cast that includes stand-up superstars Louis C.K. and Kevin Hart, the PG-rated smash from Universal averaged a muscular $23,609 from an ultrawide 4,370 theaters. Reviews were upbeat and the opening weekend came in well ahead of the $75.1M of Disney’s original animated animal hit Zootopia from March. Pets also accounted for nearly half of all box office sales for this entire weekend.

Word-of-mouth is good which should lead to a bright road ahead over the summer weeks to come when kids are out of school and need something to do seven days a week. The CinemaScore grade was an encouraging A- and the Friday-to-Saturday dip was only 4%. That compares with the 16% this same weekend last year for the spinoff Minions and the 10% for Inside Out. The studio is projecting a 24% decline on Sunday which is in line with how these films may perform at this time of year.

Universal put a giant marketing push behind Pets hitting up families and non-families alike for months. It reminded audiences that this new offering was from one of the directors of the first two Despicable Me movies which were both runaway successes. The studio went through the entire first half of the year without a single $100M+ grosser, but now finally got one after just a single weekend. And with a $75M budget, Pets will certainly be one of the more profitable films among the year’s biggest titles. Becoming the seventh film this year to break $300M domestic is certainly possible.

Overseas, Pets has grossed over $30M in the U.K. after its third weekend for an international cume of $42.6M from a few markets. 57 more territories are still to open over the next three months and in most places it will release after Ice Age: Collision Course which has already begun its global roll-out with $57.7M to date.

The big-budget adventure film The Legend of Tarzan held up well in its second swing and stayed in the number two spot with an estimated $20.6M. Off a reasonable 47% from the Friday-to-Sunday portion of last week’s holiday opening, the Warner Bros. release has banked a solid $81.4M to date. A healthy domestic final of $140-150M may result. The global total is $135.4M with a handful of major markets still to open including China next week on July 19.

After three weeks on top with muscular numbers, Finding Dory slipped to third place and took a 51% hit thanks to families shifting their attention to some new talking animated creatures. The fish sequel took in an estimated $20.4M to boost its domestic cume to a robust $422.6M making it the highest-grossing film in North America this year soaring past the $406.2M of Disney stablemate Captain America: Civil War.

Dory has also beaten the $415M of Toy Story 3 to become Pixar’s all-time number one champ. The computer animation pioneer will stick with its formula of mid-June sequels with Cars 3 next summer, Toy Story 4 the following year, and The Incredibles 2 in 2019. It has even staked out a June 2020 weekend for an untitled film. Currently, Finding Dory sits at number 16 on the list of all-time domestic blockbusters.

Another $29.7M was captured overseas this weekend for Dory boosting the offshore total to $220.2M and the global gross to $642.8M. Korea opened well to $7.1M marking the best debut ever there for any Pixar film. Many key territories have yet to open including Mexico, Japan, and the U.K. which all launch later this month plus Italy and Germany which bow in September. Finding Dory is still on course to break $1 billion worldwide. Notably, its China gross is at $38.1M after its fourth weekend which is substantially below the mammoth $235.6M that Disney grossed there with Zootopia a couple of months ago.

The raunchy comedy Mike & Dave Need Wedding Dates debuted to moderate results in fourth place with an estimated $16.6M opening weekend from 2,982 locations for a $5,567 average. Fox’s R-rated pic starring Zac Efron and Anna Kendrick earned mixed reviews and played to a young adult crowd. Moviegoers are liking, but not loving the film. The CinemaScore grade was a decent B while audience demos show females leading with 52% and the split being even between those under and over age 25.

Bucking the trend for most sequels this year, The Purge: Election Year has amassed a higher gross after its second weekend than its predecessors. The R-rated thriller fell a sharp 63% in its sophomore frame to an estimated $11.7M pushing its cume to $58.1M. Both previous Purge films were at just under $52M after their second weekends. The low-cost $10M production should reach about $80M by the end of its North American run and spawn another chapter for Universal.

Kevin Hart and Dwayne Johnson crossed the $100M mark with Central Intelligence which grossed an estimated $8.1M, off just 35%, for a $108.3M total for Warner Bros. Still struggling to reach that milestone after its third weekend was Independence Day: Resurgence which fell 54% to an estimated $7.7M for $91.5M to date. Worldwide, IDR is now at $305.8M with 70% coming from international markets.

Steven Spielberg’s fantasy epic The BFG got hammered at the box office tumbling 60% from its disappointing opening weekend. The Disney release grossed an estimated $7.6M and has banked a mere $38.7M to date heading for a final of $55-60M. Among wide releases that play in 1,500+ theaters, that would be the lowest gross of his entire illustrious career and follows the $72.3M of last fall’s Bridge of Spies which also ranked among the lowest ever for his career. BFG failed to find a place in the market this summer with kids flocking to Dory and Pets while older children went for Tarzan.

The shark attack thriller The Shallows followed with an estimated $4.8M, down 45%, for a $45.8M cume for Sony. Salman Khan’s Sultan scored the biggest Bollywood opening of this year and landed in tenth place with an estimated $2.2M from 283 locations for a solid $7,830 average. The cume for Yash Raj since its Wednesday launch is $3.2M.

Among notable summer sequels below the top ten, The Conjuring 2 is about to join the $100M club with $99.4M to date and will cross the triple-century mark worldwide soon with $292M global so far. The horror sequel cost only $40M to produce. X-Men: Apocalypse is closing out its run and sits now at $154.5M after its sixth weekend which is still less than the $157.3M of the first X-Men from the summer of 2000 when tickets cost much less. Captain America: Civil War is now up to $406.2M and should finish just behind the $409M of Iron Man 3, but well ahead of the $259.8M of The Winter Soldier.

Compared to projections, The Secret Life of Pets opened well ahead of my $72M forecast and Mike & Dave Need Wedding Dates debuted close to my $18M prediction.