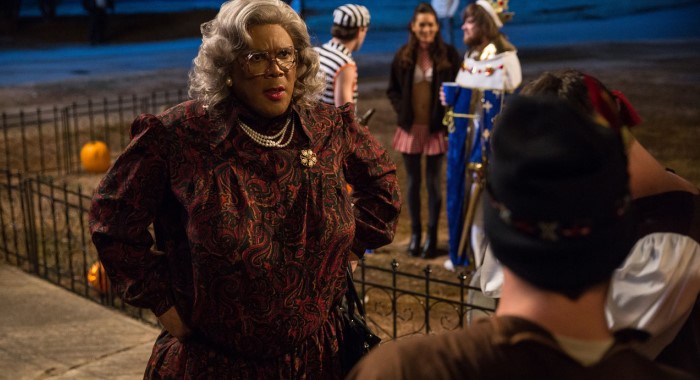 This weekend, the wise old lady defeated the blue collar hero in the latest box office election as the Tyler Perry comedy Boo! A Madea Halloween opened with strength at number one while Tom Cruise’s new action sequel Jack Reacher: Never Go Back did well, but finished in second place. The polls had predicted a tighter race, but when the public showed up at the multiplexes, it was not even close.

After a two-and-a-half-year break from the director’s chair (an eternity in Tyler Perry land), the mogul was back with a commanding performance for Boo!which grossed an estimated $27.6M from 2,260 locations for a muscular $12,212 average. It was Perry’s first number one hit in seven years which for most filmmakers would span three or four films. TP had eight films in between his last and current number one hits. After doing roughly two films per year his grosses eventually settled down and the break was needed to get his fan base excited for his return with new content.

Madea has been Perry’s most popular character but the last one, 2013’s A Madea Christmas, was an underperformer with a $16M debut. The previous two Madea comedies opened to just over $25M a piece so Boo reverted back to drawing out that same size crowd. The PG-13 Halloween comedy from Lionsgate earned a solid A grade from CinemaScore – the fourth Madea flick to get that.

Tom Cruise settled for second place with his action sequel Jack Reacher: Never Go Back which debuted to an estimated $23M from 3,780 sites for a good $6,085 average. The Paramount release improved upon the $15.2M opening weekend of the last film, 2012’s Jack Reacher, which was released in December when films debut softer but enjoy great holiday legs.

Reviews were mixed for the PG-13 entry but paying crowds were satisfied as the CinemaScore grade was a commendable B+. Studio data showed that older men led the way. 57% of the crowd was male and 82% were over 25.

Overseas, Never Go Back launched to $31M and took the number one spot in 20 markets with most debuts beating the last film. China opened day and date with North America grossing $5.6M over three days compared to the two-day $4.8M debut of the first film from February 2013, two months after the domestic release. The first Jack Reacher grossed $218M globally and this $60M-budgeted sequel is likely to reach that mark, if not surpass it. Key markets Germany, Japan, Spain, Korea, Brazil, and Mexico are still to open in November.

In a virtual tie for third place, this year’s only October horror movie Ouija: Origin of Evil opened to an estimated $14.1M from 3,167 locations for a moderate $4,439 average. The Universal sequel was down 29% from the $19.9M bow of its 2014 predecessor which attacked on this very same weekend. Studio data showed that the audience was 57% under 25, 61% non-white, and split evenly between genders. Reviews were quite good but like with many fright sequels, the opening weekend turnout shrank.

Ben Affleck faced direct competition from Tom Cruise but his latest crime drama The Accountant fared well against it dipping a reasonable 43% to an estimated $14M in its sophomore frame. With $47.9M to date, Warner Bros. may reach about $80-85M. Dropping 41% in its third weekend was The Girl on the Train with an estimated $7.3M pushing the total to $58.9M for Universal.

Fox saw a 33% slide for the kidpic Miss Peregrine’s Home for Peculiar Children which collected an estimated $6M boosting the sum to $74.4M. Global rose to $224.4M. The studio saw no luck getting ticket buyers to show up for the Zach Galifianakis comedy Keeping Up with the Joneses which flopped with an estimated $5.6M from 3,022 locations for a weak $1,853 average. Galifianakis also failed to draw up a crowd for his other recent comedy Masterminds which bowed to just $6.5M last month. Studios will have to rethink whether he is leading man material.

In its second weekend, Kevin Hart: What Now? tumbled 65% to an estimated $4.1M giving Universal $19M in ten days. That is down 18% from the ten-day start of Hart’s last standup comedy concert film Let Me Explain from 2013 despite having three times as many theaters this time around. Finishing at about $25M seems likely which will still be a profitable level for the low-cost project.

The toon Storks followed with an estimated $4.1M, off just 28%, for a new cume of $64.7M for Warner Bros. It still has one more week of having kids to itself before Trolls arrives at the beginning of November. Worldwide is $147.8M. Rounding out the top ten was the pricey disaster thriller Deepwater Horizon which fell 43% to an estimated $3.6M putting Lionsgate at $55.3M.

In limited release, the critically acclaimed indie Moonlight generated an explosive launch in platform release selling out shows and grossing an estimated $415,000 from just four theaters for a scorching $103,685 average per site. A24 expands next weekend before going nationwide on the third weekend. The faith-based drama I’m Not Ashamed posted a mild debut with an estimated $900,000 from 505 theaters for a soft $1,782 average.