Mission: Impossible - Rogue Nation and Sinister 2 round out the top three. 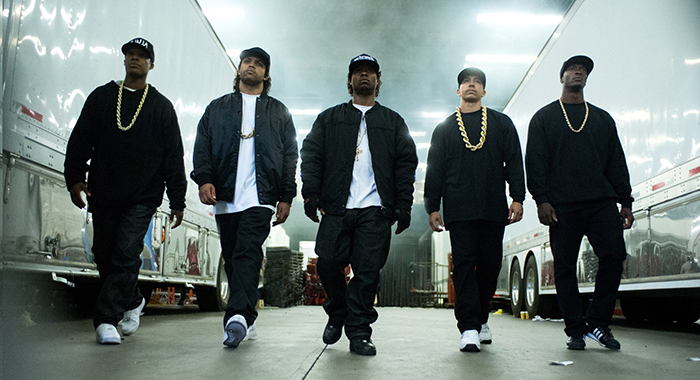 The late-August box office blues kicked in as North American multiplexes witnessed low attendance thanks in part to studios dumping out new releases nationwide that they have no confidence in. Easily holding onto the number one spot was Straight Outta Compton with an estimated $26.8M dropping 56% in the process. By comparison, 2002’s runaway hit 8 Mile fell 62% in its second weekend after a stellar opening.

That was a harsh fall for a non-sequel drama but strong word-of-mouth is still pushing this one to great heights. Universal broke the $100M mark over the weekend with Compton now sitting at $111.5M. A final in the neighborhood of $170M may result for this low-cost $29M production.

Ruling as the top mainstream action movie for the past four weeks, Mission: Impossible – Rogue Nation saw a low 32% slide to an estimated $11.7M boosting Paramount’s cume to $157.8M. Tom Cruise has been in the top two spots for four straight weeks now. The only other film this summer to do that was Jurassic World with five. Add in $280.8M from overseas markets and MI5 has now grossed $438.6M worldwide with China still to come.

New releases were mostly ignored by moviegoers but faring best was the horror sequel Sinister 2 with an estimated $10.6M falling below the $18M of its 2012 predecessor. The R-rated title from Focus averaged a mild $3,844 from 2,766 sites and was panned by critics.

The action offering Hitman: Agent 47 fared poorly with an estimated $8.2M opening from 3,261 locations for a soft $2,515 average. The R-rated Fox release debuted below the $13.2M of 2007’s Hitman which played in 800 fewer theaters. Reviews were dismal.

The stoner action-comedy American Ultra failed to connect with audiences and opened poorly in sixth place with an estimated $5.5M from 2,778 locations for a puny $1,980 average. The Lionsgate release was rejected by critics and did not excite the target audience of young adults. The opening was almost identical to the weak $5.7M bow of 2009’s Adventureland which also starred Jesse Eisenberg and Kristen Stewart.

Minions held up well with kids on their last days before going back to school and grossed an estimated $3.7M, off just 28%. Universal has banked $320M in North America and $989.4M worldwide so far getting ever so close to knocking on that billion dollar door. Having a bit less success was Fantastic Four which saw another tumble – 55% this time – to an estimated $3.7M for a horrible cume of $49.6M. 17 days into its run and the super hero reboot still has not made as much as just the opening weekends of the prior Fantastic pics from 2005 and 2007.

The top ten films grossed an estimated $86M which was down 12% from last year when Guardians of the Galaxy reclaimed number one with $17.2M; but up 3% from 2013 when The Butler stayed in the top spot with $16.5M.