This Week’s Ketchup brings you more headlines from the world of film development news, covering such titles as Clifford the Big Red Dog, Five Nights at Freddy’s, and Predator 5. 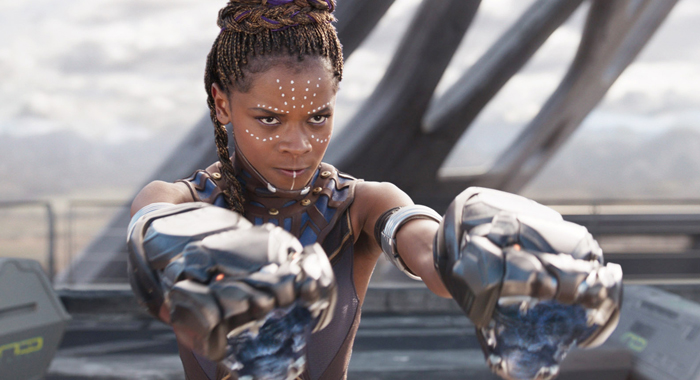 When the world learned in August of the surprising death of Chadwick Boseman due to colon cancer, many people wondered if and how Marvel Studios could proceed with the planned Black Panther sequel. For example, one rumor that circulated over the fall involved the possibility of replacing Boseman as T’Challa, which Marvel confirmed earlier this month they would not do. We can now report that Black Panther II is indeed scheduled to start filming in July, 2021 with the sequel’s emphasis now shifting to T’Challa’s sister Shuri (Letitia Wright), who in the comics did take the title of Black Panther in 2005 when T’Challa was seriously injured. Director Ryan Coogler (Creed, Black Panther) will return for Black Panther II, as are Black Panther stars Angela Bassett, Lupita Nyong’o, Winston Duke, and, obviously, Letitia Wright. The first new cast member to be announced is Tenoch Huerta (Netflix’s Narcos: Mexico) as one of the film’s antagonists, but we don’t yet know anything about who that might be. Black Panther II is currently scheduled for release on May 6, 2022, but during the COVID-19 pandemic, that date (like all release dates) could be subject to change.

Many shows were not able to air as usual this fall because of the COVID-19 pandemic, but one series that did recently premiere a new season was Netflix’s The Crown. Season 4 of The Crown (Certified Fresh at 97%), which premiered on Netflix on November 15, 2020, focuses on the 1980s and the character arcs of two very different women: Prime Minister Margaret Thatcher and Lady Diana Spencer, the future Diana, Princess of Wales, as played by relative newcomer Emma Corrin. We will soon see another actress’ depiction of Princess Di, as Kristen Stewart is now preparing for her starring role in Spencer, which will start filming in early 2021. Talking about the film this week, Stewart confirmed that she has indeed watched season 4 of The Crown, saying, “Luckily, there’s no overlap time-wise, and also historically, and tonally, they’re very different, so I’m really cool with it.” Rather than being a true biopic, Spencer will focus on one of Princess Diana’s “final Christmas holidays with the House of Windsor in their legendary Sandringham estate.” The Spencer screenplay was written by screenwriter Steven Knight (Eastern Promises, Allied, Locke), and the director will be Pablo Larrain, who previously directed the similar film Jackie (Certified Fresh at 87%), starring Natalie Portman as First Lady Jacqueline Kennedy; Portman went on to be nominated for the Best Actress Oscar that year. Kristen Stewart’s latest film, the Christmas-themed rom-com Happiest Season (Certified Fresh at 90%) premiered on Hulu Wednesday, November 25, 2020.

For a while now, Nicolas Cage’s filmography has run the gamut from high profile Marvel movies (Spider-Man: Into the Spider-Verse) to movies that even Nicolas Cage doesn’t remember starring in (we won’t name names). One project, however, that has attracted a lot of attention since its first announcement is The Unbearable Weight of Massive Talent, a dark comedy in which Cage will star as himself. The premise involves a wealthy Nicolas Cage superfan (Pedro Pascal of The Mandalorian and Game of Thrones) who hires Cage to perform highlights of his various movies at a point when Cage is particularly hard up for money. In addition to Pascal, Tiffany Haddish, and Sharon Horgan, the latest star to join The Unbearable Weight of Massive Talent is Neil Patrick Harris, as Cage’s agent. The casting of Neil Patrick Harris is particularly “on point” as Harris also has experience playing a comedic version of himself, namely in the three Harold and Kumar movies.

3. TIFFANY HADDISH TO STAR IN SPINOFF JUMP STREET: NOW FOR HER PLEASURE

Nearly two years ago, the news broke that Tiffany Haddish and Awkwafina were in talks to star in a new 21 Jump Street movie, taking over where Jonah Hill and Channing Tatum left off in 22 Jump Street (Certified Fresh at 85%). Late 2018, however, seems a lot longer ago than a mere two years, thanks to “2020… everything,” so some may have thought that story was no longer active. That may be why the buried news recently that Haddish is now attached to star in a movie called 21 Jump Street: Now For Her Pleasure was as big of a story as it was. With Haddish confirmed, the news now might be that Awkwafina appears to no longer be involved, so the next question would be which actress might take that role instead. The reason 21 Jump Street: Now for Her Pleasure made the news is that its screenwriters, the sister team of Wendy Molyneux and Lizzie Molyneux-Loeglin (of TV’s Bob’s Burgers) also recently signed with Marvel Studios to adapt the probably-R-rated sequel Deadpool 3, starring Ryan Reynolds.

In 2017, Universal Pictures’ plans for the Dark Universe Cinematic Universe fell apart following the disappointing returns for what would’ve been the first in the franchise, Tom Cruise’s The Mummy (Rotten at 16%). In the three years since, however, Universal has stayed both busy and productive with attempts to revive their Classic Universal Monsters in other ways, starting earlier this year with the reboot of The Invisible Man (Certified Fresh at 91%). The latest project comes to us at a particularly well-timed point, because it’s the same week that we found out that Tiffany Haddish is still attached to star in 21 Jump Street: Now for Her Pleasure. One of the 21 Jump Street stars, Channing Tatum, is reuniting with the directing team of Phil Lord and Chris Miller (who helmed the Jump Street movies) for a “modern-day tongue-in-cheek thriller inspired by Universal’s classic monster legacy,” to be written by screenwriter Reid Carolin (Magic Mike, Magic Mike XXL), who also came up with the project’s original idea. That’s the end of what we know right now about this comedic thriller’s concept, but this writer can’t help but remember what comedic franchise was also involved in interconnecting the various Universal Monsters back in the 1940s and 1950s: Abbott and Costello. Starting in 1948 with Abbot and Costello Meet Frankenstein, the comedy team had several adventures that included Abbott and Costello Meet the Invisible Man, Abbott and Costello Meet Dr. Jekyll and Mr. Hyde, and Abbott and Costello Meet the Mummy. Could Channing Tatum be “Abbott” in a new take on those movies? Just a theory.

5. 10 CLOVERFIELD LANE DIRECTOR ON THE HUNT FOR PREDATOR 5

Following the first Predator in 1987 and the sequel Predator 2 in 1990, there was a 20 year gap before there was another standalone Predator movie (not counting the crossovers with Alien) in 2010 with Predators (Fresh at 64%), and then another eight years before the fourth film, 2018’s The Predator (Rotten at 33%). For as ubiquitous as Predator seems in pop culture, those four movies combined only add up to a four movie global box office take of $443 million (from a combined budget of $178 million). And yet, Hollywood keeps trying to make Predator happen. 20th Century Studios (the new version of 20th Century Fox, post-Disney acquisition) is now developing a fifth standalone Predator movie to be directed by Dan Trachtenberg (10 Cloverfield Lane, Certified Fresh at 90%), working from a screenplay by Jack Ryan producer Patrick Aison. No other details are known about what Trachtenberg has planned for the fifth Predator movie.

Back in 2018, the news broke that director Chris Columbus (Home Alone, Harry Potter and the Sorcerer’s Stone) had signed on to write, direct and produce an adaptation of the popular horror video game franchise Five Nights at Freddy’s, about a spooky Chuck E. Cheese-style restaurant. Given that amount of time (and everything else that’s happened in 2020), one might have thought that the Five Nights at Freddy’s movie had long since fallen apart, but this week, the creator of the game franchise, Scott Cawthon gave an update to state quite the opposite. According to Cawthon, Chris Columbus has finished the screenplay adaptation and plans to start to filming for Blumhouse Productions in the spring of 2021. Cawthon also revealed a few of the different premises that were considered, including the one that appears to be moving forward (though one has to wonder why the movie can’t just be a direct adaptation of the video games themselves).