As the cult classic turns 50 years old today, we look back at some of the most memorable films it inspired. 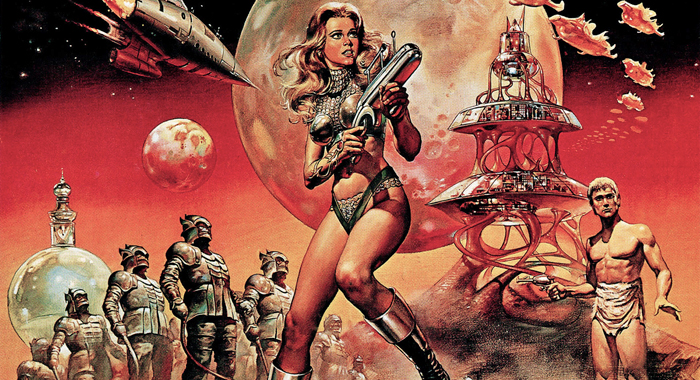 Roger Vadim’s trippy science fiction comedy Barbarella opened on October 10, 1968. For decades, rumors have swirled of a sequel, remake, or TV adaptation of the Aquarius-era stoner film about a stunning young woman who sleeps her way through the galaxy. In the aughts, Robert Rodriguez was attached to a remake that would have starred his then-girlfriend and muse, Rose McGowan. That never materialized, nor did a proposed TV adaptation whose pilot was to be directed by Nicolas Wending-Refn.

Despite its cult fame, Vadim’s 1968 mind-bender has never been followed by a sequel or a remake. But it has nevertheless proven extremely influential, and its DNA can be found in plenty of hits, flops, and obscurities, many of them also based on comic books and featuring badass female protagonists. Barbarella’s not particularly successful combination of kitschy, over-the-top camp comedy, social satire, and stoner spectacle provided just as much a template for the films that followed it as the voyeuristic sexuality for which it became famous. It has inspired some riotous cult classics, but also a lot of sexy science fiction satires that, like Barbarella itself, aren’t particularly sexy, funny, or satirical. 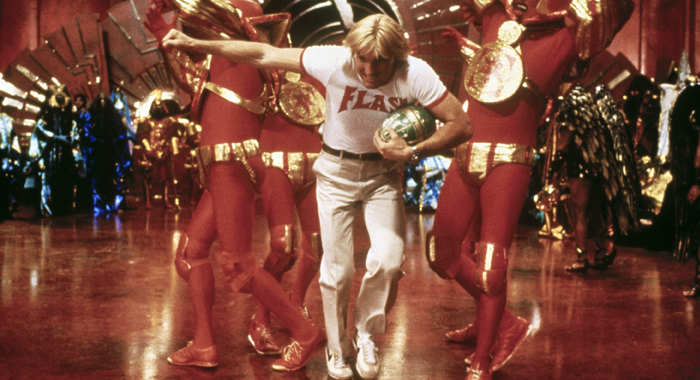 If Mike Hodges’ Flash Gordon feels an awful lot like Barbarella, that’s because they were conceived from similar blueprints. Both are big-budget, kaleidoscopic science fiction epics produced by Italian super-producer Dino DeLaurentis and overflowing with tawdry sensuality, eye-popping special effects, and enough trippy spectacle to satisfy the most demanding stoner.

DeLaurentis clearly conceived of Flash Gordon as the next Star Wars — the comic strip was a big influence on George Lucas’ deathless space opera. But despite its echoes of Star Wars, Flash Gordon owes just as much, if not more, to Barbarella’s combination of BDSM-infused naughtiness and incongruous, child-like innocence.

Flash Gordon replaced the free love sexuality of Barbarella with the sweaty, stimulant-fueled sensuality of disco at its most brazenly sensual, with equally explosive and unforgettable results. 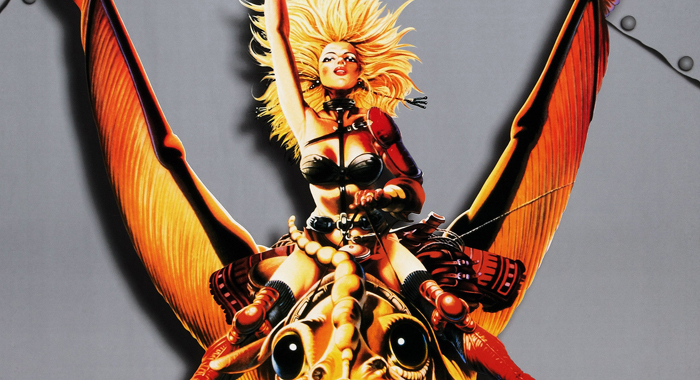 Few of Barbarella’s far-flung offspring can match the movie’s pedigree for hipness. The exception is the cult 1981 Canadian animated film Heavy Metal, which is funnier and more genuinely satirical as well, if every bit as juvenile. It was produced by Ivan Reitman, co-written by Len Blum and Daniel Goldberg (writers of Reitman-directed hits Meatballs and Stripes) and featured a voice cast that included much of SCTV’s beloved crew (John Candy, Harold Ramis, Joe Flaherty, Eugene Levy), as well as John Vernon and Richard Romanus. Throw in a primo rock soundtrack featuring Cheap Trick, Devo, Black Sabbath, and Donald Fagen and you have an instant cult classic irresistible to the blacklight-and-bong-in-the-closet crowd.

The much-loved adaptation of the popular science fiction and fantasy magazine of the same name is a mind-bending, time-hopping anthology film united by a glowing green orb of PURE EVIL that reappears throughout pulpy vignettes and an adolescent boy’s unending fascination with the naked female form at its most cartoonishly buxom. 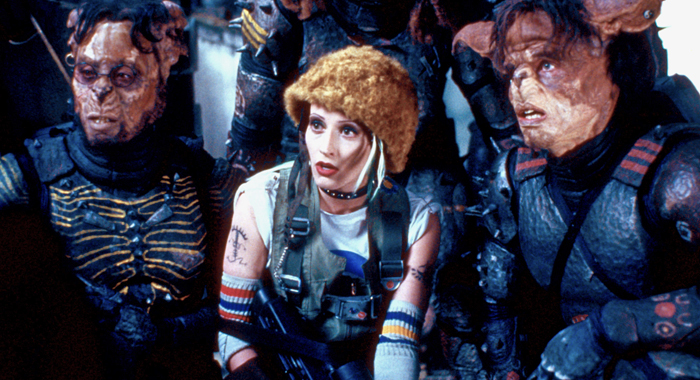 It seems like every generation has a Barbarella of its own that reflects the changing fashions and mores of the times that produced them and irrevocably shaped them. Barbarella was a happening, groovy be-in of a movie that could only have happened in the late 1960s, Flash Gordon gave the sexed-up outer space shenanigans a disco feel, and 1995’s Tank Girl, yet another zeitgeist-chasing adaptation of a cult comic book about a plucky, kick-ass heroine of the future, gave this material a Riot Girl update. The sensuality of Rachel Talalay’s campy cult flick was smartass, sarcastic, androgynous, and gender-bending in sharp contrast to the soft, doe-like femininity of Jane Fonda.

Tank Girl takes place in a grim, dystopian, drought-ravaged future where the malevolent forces that control the limited water supply hold supreme power. They’re opposed by free-thinking punks like the title character (Lori Petty) and her friends, who occupy a gross world overflowing with sexual deviants, most notably a pedophile named Rat Face (Iggy Pop), who is as ugly on the outside as he is on the inside.

Squeamish studio executives toned down the sexuality of the comic strip and earlier versions of the script that dealt much more extensively with the romantic and sexual relationship between Tank Girl and Booga (Jeff Kober), a mutated human-kangaroo super-soldier hybrid. Rumor has it there was even a fabled shot of a naked kangaroo penis that was excised from the final version, but plenty of kinkiness and sexual suggestiveness made it into the film all the same. Besides, even in a punk-rock, post-Barbarella world, nobody needs to see a naked kangaroo penis. 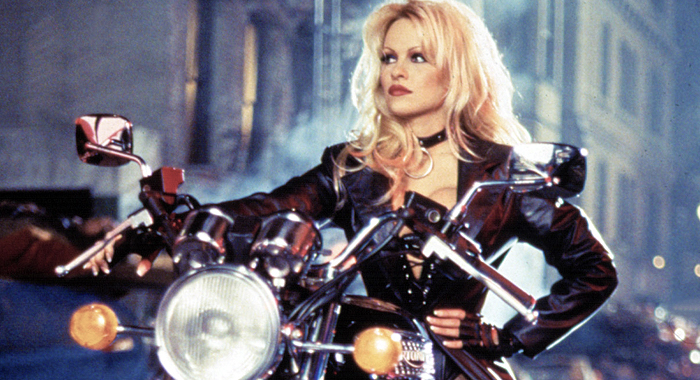 Starring as a warrior for good in a futuristic, titillating science fiction future world in a high-profile adaptation of a popular comic book made Jane Fonda a movie star. That did not happen, however, when Fonda’s fellow activist/sex symbol, Baywatch breakout star and animal rights zealot Pamela Anderson, decided to follow in Fonda’s footsteps. Here, Anderson plays the titular comic book badass, Dark Horse comics’ futuristic bounty hunter Barb Wire, in a poorly received action fantasy with the misplaced audacity to flat-out steal the premise of Casablanca… with Anderson in the Humphrey Bogart role.

While Vadim’s visually stunning but dramatically and comedically inert cult classic is sleaze with prestige, or trash with class, Anderson’s ill-fated attempt at becoming a buxom, cold-blooded action star is just straight-up garbage, a lurid exploitation movie devoid of ideas and intelligence. As an unofficial, blood- and boob-saturated remake of Casablanca, Barb Wire fails to improve upon its inspiration. 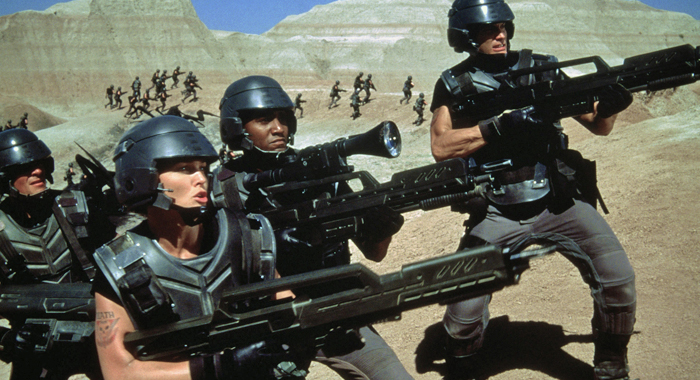 If Barbarella is not as sophisticated a satire as it sets out to be, that’s probably because director Roger Vadim has a lumbering, heavy-handed touch all wrong for sly comedy. The same cannot be said of Paul Verhoeven, the mad genius behind Robocop and Total Recall.

Verhoeven’s wildly divisive 1997 Robert Heinlein adaptation/parody Starship Troopers might just have been too satirical. His brutal vision of a fascist future — in which ridiculously good-looking super-soldiers, both male and female, live and shower together en masse as they take on an evil insectoid species — is so straight-faced that, at the time, it was mistaken by some for what it was sending up. The film’s nudity and hard R-rating go a long way toward separating Starship Troopers from Star Wars, as does its pitch-black satire and intense violence. 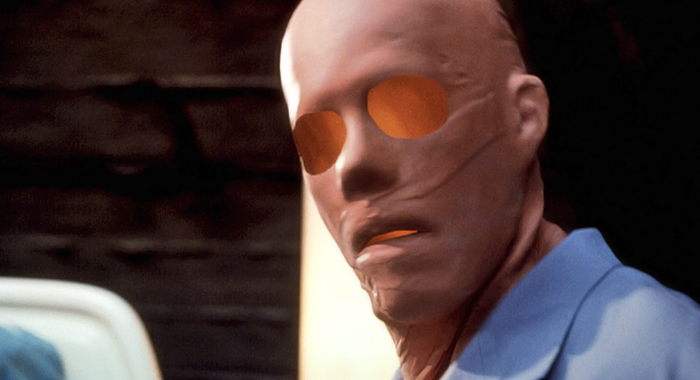 With the 2000 Invisible Man riff Hollow Man Verhoeven took his bleak, uncompromising worldview to the story of a brilliant, troubled scientist (Kevin Bacon) who discovers the secret to invisibility and, being a misogynistic sociopath, abuses his new power to sexually assault a neighbor as part of an ongoing crime spree that includes various murders and menacing Linda McKay (Elisabeth Shue), an ex-girlfriend he’s unhealthily obsessed with.

Verhoeven goes further than any version of this story other than The Invisible Maniac in illustrating just how quickly the power of invisibility would corrupt a man and unleash his ugliest, most violent and sexual urges. As a result, Verhoeven made a movie that is disturbingly sexual without being sexy, and darkly satirical in its take on the underlying ugliness of human nature without even trying to be funny. 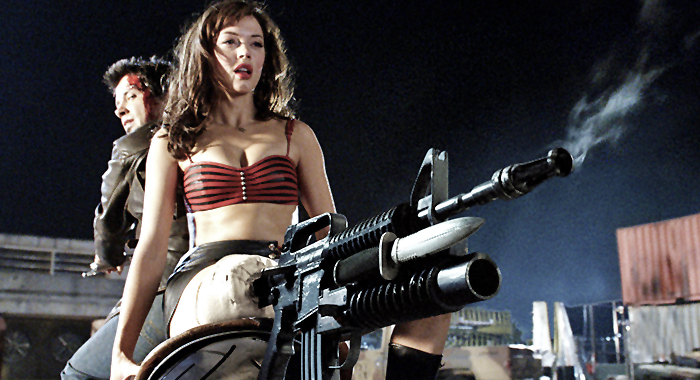 Needless to say, Rose McGowan did not get to play Barbarella for Robert Rodriguez, but 2007’s Grindhouse — an ambitious attempt by Rodriguez and Quentin Tarantino to replicate the vibe of an evening at a sleazy, sordid drive-in in the 1970s — gave them a consolation prize in the form of Planet Terror, Rodriguez’s half of the double feature.

Planet Terror casts McGowan as Cherry Darling, a pissed-off go-go dancer who ends up doing battle with zombie-like creatures, as well as the usual assortment of creeps with wandering hands that are ubiquitous in movies like this, at least one of whom ends up getting stabbed in the face with part of Cherry’s wooden leg.

Eventually, Cherry’s busted fake leg is replaced by an assault rifle and a grenade launcher, and she starts dealing out death with her peculiar new arsenal. Planet Terror exists for the sake of its central audacious image of woman and weapon welded together into something brazen and bizarre and awesome and new. Unfortunately, like Vadim, Rodriguez isn’t capable of satire — sledgehammer, savage, sophisticated, or otherwise. Leaden, labored camp is more his speed. A tough, sexy, confident woman who is also a deadly weapon? That’s a wet dream out of Heavy Metal, but it’s not quite enough to base an entire movie around, even one this intentionally ridiculous.

Nathan Rabin is the author of six books and the proprietor of Nathan Rabin’s Happy Place.