Plus: The spin-off series you never knew you needed and intel on season 3. 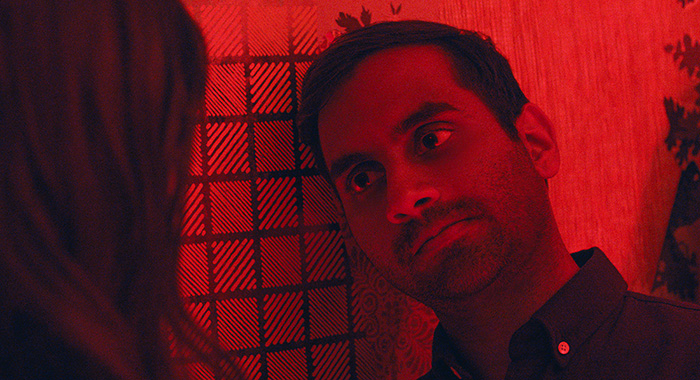 Since its 2015 premiere on Netflix, Aziz Ansari and Alan Yang’s Master of None has been praised as nothing less than, well, masterful. With writing, direction, and performances attuned to the trials of 30-something singledom, being a first-generation Indian- and Asian-American, and trying to find one’s place in the world as an artist, the series is quietly ambitious in both technicality and emotional heft — and it’s unlike anything else on TV today.

While praise comes a-plenty for the series (it currently sits pretty with a 100 percent Tomatometer score), some Twitter users recently took issue with the conspicuous economic privilege displayed by Ansari’s character Dev, a working commercial actor–turned–reality competition series host. He can afford, for instance, to fly to Italy to study pasta-making, a passion-project craft that ultimately does little to further his cushy career; he can afford to take dates on a nighttime helicopter tour across New York City’s skyline; and, an aspect the series has become particularly beloved for, he can afford to eat out at the Big Apple’s hottest food destinations as often as he likes. 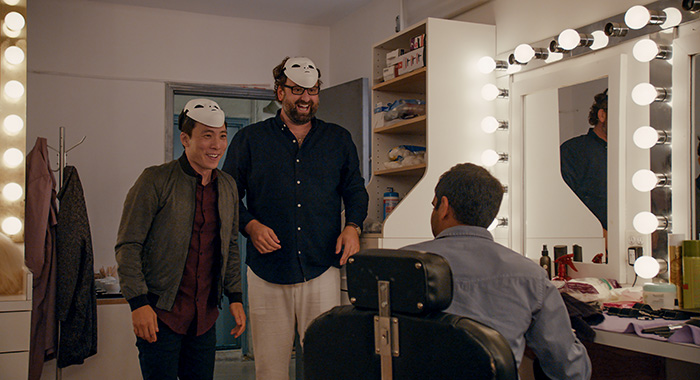 If Dev were a white male, wouldn’t many call foul for Master of None being just another story about a lovelorn privileged white dude?

But then he broke it down: Dev benefits from a few zeros in his bank account, sure, but that’s just to show he’s a stable, moderately successful New York actor. It was never the intention of Master of None to draw him as a starving-artist type. (And as we can see from the series’ 20 episodes, he has enough on his plate to keep us engaged without worrying about his bank statement.)

“I think the issue is people see me [like] I’m kind of in the generation of Broad City, Girls, and all that stuff. But I’m a little bit older, actually. I’m in my 30s,” Ansari explained. “And so, we always thought about the character like he’s not in his 20s figuring stuff out. He’s more [Jerry] Seinfeld or Garry Shandling. He has an apartment and everything and doesn’t have roommates. We didn’t want to write roommate characters and all that stuff, so like, let’s just say he has a lot of money from commercials, and we don’t have to worry about it.” 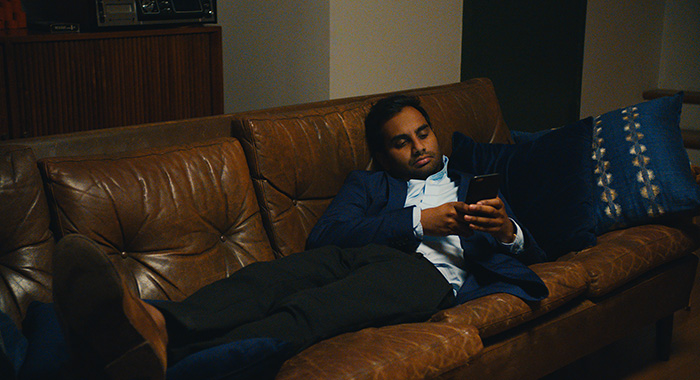 Not that there’s anything wrong with Broad City.

“We thought that those other shows were doing a good job of that,” Yang said, chiming in. “[They] do a good job of showing, ‘Hey, I’ve got a [crappy] apartment in New York.’ This show isn’t that. It’s also not like he’s Vinny Chase in Entourage. He’s not getting on private jets and stuff.”

“[But] I’d watch an Indian Entourage,” Yang added in the funniest exchange of the panel.

“We’ll just go into Netflix with a picture of my cousin Harris,” Ansari posed, before correcting the series name to “Intouraj” —subsequently planting the seed for a Master of None spin-off we didn’t know we needed. 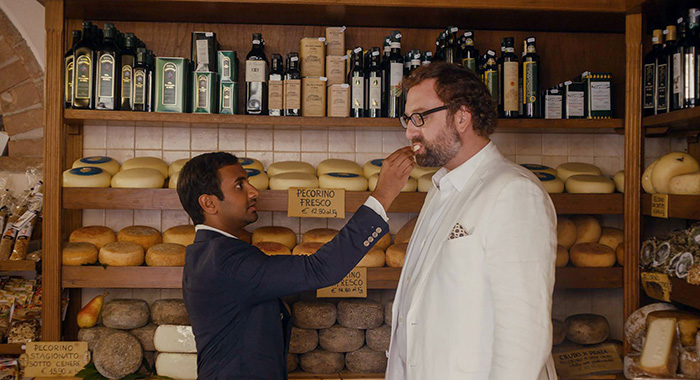 Speaking of the writers’ room, though, the hour-long discussion did offer a glimpse of hope on a Master of None season 3. Though the full 10-episode installment of the project’s second round dropped May 12, the rumor mill was quickly abuzz with the prospects of a third outing. Ansari, unfortunately, can’t give a straight answer on that point.

“We wouldn’t want to do it unless we thought we could make a season 3 that’s better and felt as rich and interesting,” he told the Paley Center audience. “Me, personally, I feel a little tapped as far as stuff to say about being single and eating and f—ing and being sad.”

But just because he’s tired after a year of Master of None–fueled blood, sweat, and tears, doesn’t mean Ansari’s natural creativity gets put on hold.

“At the same time, like, I know the show’s out there, and it’s the funnest job I ever had. And when things happen to me, I used to think about stand-up and write in a stand-up notebook; now I just text Alan whenever something ridiculous is going on in my life. Even the other day, some stuff was happening and I was, like, ‘Man, this is helping with season 3.’ It’s not good for Aziz, but it’s good for Dev.” 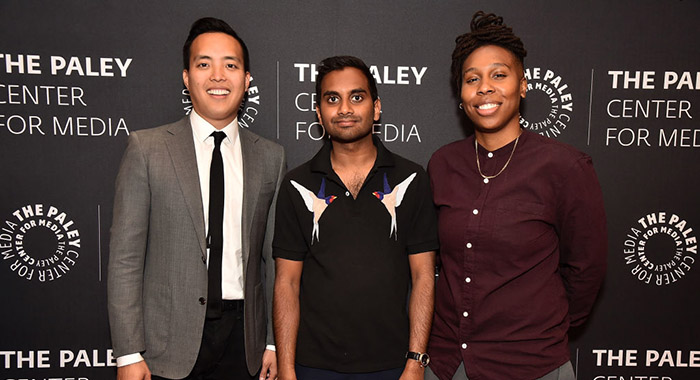 Another challenge for the Master of None crew? Dropping the whole season at once. Rotten Tomatoes caught up with Yang and Waithe on the red carpet prior to Friday’s event, where they both shared their thoughts on the pros and cons of having a binge-watching audience.

Waithe said that pushing the series out all at once comes with its own set of hardships, particularly in the way she interacts with fans of the series. But it’s nothing she can’t handle.

“I’m on Twitter or Facebook like everybody else, and to see people reacting to different episodes in one day, that’s the hardest thing. The fact that normally, every week you’d go, ‘Oh, this happened this week on this episode.’ Instead, they’ll go, ‘Oh, I watched the last episode and now I’m watching the first.’ People can literally pick and choose. So [I’m] getting reactions that are all over the place… I’m always trying to move my brain around.” 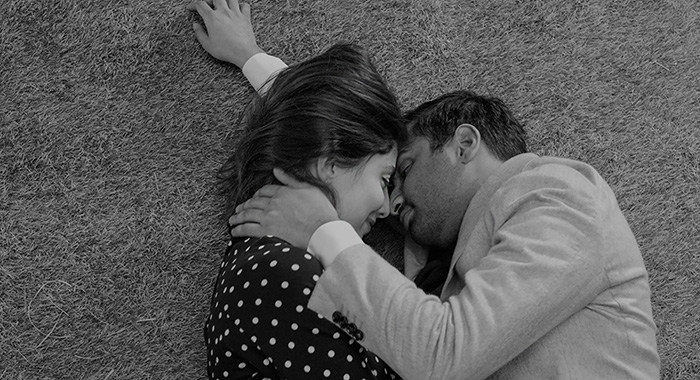 For Yang, binge culture comes as a blessing in disguise. Yes, it calls for more of a creative haul up front, but he also enjoys the challenge of making each one just different enough from the one before that an array of viewers could be hooked in.

“The thing about our show season 1 that I thought was really great about being all out at the same time was that the episodes are all pretty different from one another and there’s a lot of variety,” Yang explained. “So we felt like if someone turns it on and they don’t love the first episode as much, they might watch the second one and be like, ‘Wow, they might surprise me and come at it with a different angle completely in the second episode.’ I think the same thing happens this year where the first one’s in black and white and it’s in Italian. The second one is in Tuscany, it’s fun, it’s comedic, there’s a lot of big set pieces. The third one is about religion, it’s about Islam in America. The fourth one is edited creatively. [For that reason,] I like that people can watch it all at once.”

Master of None season 2 is now streaming on Netflix