Romantic comedies are often the most difficult films to pull off; you need
palpable chemistry between the leads, inspired jokes, and a delicate sense of
comic timing. Good luck finding those attributes in
Good Luck Chuck,
critics say. Dane Cook stars as a guy who’s the victim of a curse, one in which
any woman who dates him finds true love — with someone else. Enter Jessica Alba
as a penguin-lover who really digs him. Can she break the curse? Critics say the
movie seems to be under a spell of its own, one in which potential laughs are
squandered by means of rude humor, shopworn slapstick, and an ultimately cheesy
resolution. At seven percent on the Tomatometer, Chuck this one to the
curb.

"Why yes, I am interested in renewing my subscription to
The Atlantic Monthly."

Sydney White, the titular heroine of this Snow White update, might find herself
singing, "Someday, my prince will come." Or perhaps, "Someday, a bunch of
princely movie critics may give my movie a good review."
Sydney White stars
Amanda Bynes as a college freshman who has to contend with a malicious sorority
queen while whipping a frat of geeks into social shape. While critics agree
Bynes is a talented actress who’s rescued movies in the past, her comic skills
go largely to waste here on a script that functions completely on stereotypes
and does little to plant new twists on the classic
fairy tale. In fact, the scribes say the unsubtle references to Snow White lore
in the movie are jarring and distracting. At 46 percent Tomatometer, Sydney
White is one poisoned apple.

"Tomatometers that big gotta be fake."

With Eastern Promises,
David Cronenberg continues to utilize genre
trappings for his singular dark, bold vision. Promises stars Viggo
Mortensen as a mysterious yet charismatic Russian hitman whose loyalties are put
into question when he encounters Naomi Watts’s character. Critics praise
Eastern‘s tight pacing, grisly images that are shocking but short of
exploitation, and Mortensen’s daring performance.  And a fight scene in a
bathhouse between Mortensen and a group of thugs is being touted as one of the most impressive action set piecess in recent memory.  At a
Certified Fresh 86 percent, Cronenberg Promises a good time. (Check out our interview with Cronenberg and Mortensen
here).

"So what makes you qualified to be an American Apparel model?"

Are video game adaptations headed the way of the eggplant wizard? That’s up for debate, but
it appears that the people behind
Resident Evil: Extinction were
prepared for a critical ice age; what other reason for not screening the movie
before its release? As with the first two Evil flicks, Extinction
stars Milla Jovovich as a zombie killer roaming a post-apocalyptic landscape.
Kids, put down your biology textbooks and Guess that Tomatometer. (Oh, and be
sure to check out our report from the Resident Evil: Extinction set
here).

"Just give me some green herb and no one gets hurt."

Also opening this week in limited release: The Brazilian import
Antonia,
the gritty story of a group of female rappers overcoming poverty, is at 88
percent; Sean Penn‘s
Into the Wild, starring Emile Hirsch as a young man
who ditches civilization for the wilderness, is at 85 percent;
The
Assassination of Jesse James by the Coward Robert Ford, a revisionist look
at the famed outlaw starring
Brad Pitt and
Casey Affleck, is at 84 percent;
The
Last Winter, a supernatural/philosophical horror film set in Alaska, is at
80 percent;
Beauty Remains, a story of
two sisters in love with the same man on the cusp of the Chinese Revolution, is
at 67 percent;
Adrift in Manhattan, about profound encounters between
strangers in the Big Apple, is at 60 percent;
The Jane Austen Book Club, a tale of book club members who
find their lives paralleling the text of the great author, is at 58 percent; and

Trade, a drama about young women sold into sexual slavery, is at 33
percent.

"Now give me some sensibility, with a little pride and/or
prejudice thrown in."

Finally, props to our old buddy
Mizzoucritic, who came the closest to guessing
Dragon
Wars‘ 25 percent Tomatometer. If you see MC, be sure to spot him for
breakfast at Ron’s Country Boy, the ideal eatery for celebrating a hard-fought
victory. 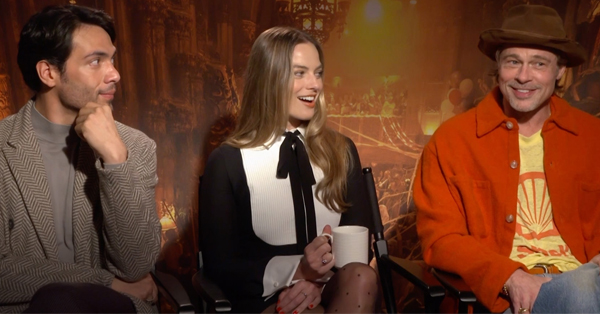