7 Things We Learned on the Set of Hulu's Difficult People

Amy Poehler's New Comedy Shows the Fun Side of Being Difficult

Be prepared to laugh and cringe simultaneously from all the embarrassing moments in Hulu’s new original series Difficult People, starring Emmy nominee Billy Eichner (Billy on the Street) and author/podcaster Julie Klausner as two struggling comedians who hate everything in the world except for each other and pop culture. The two witty pals frequently land in awkward situations as a result of their brash and snarky behavior. Amy Poehler executive produces the edgy comedy, which also costars Gabourey Sidibe (Empire) and Tony award winner Andrea Martin.

Rotten Tomatoes caught up with the cast while visiting the set in New York City in February. Here’s what you need to know about the Difficult People before the first two episodes debut on Hulu Wednesday, August 5. The rest of the 8-episode first season will air every Wednesday.

AMY POEHLER WAS INSTRUMENTAL IN GETTING THIS SERIES MADE 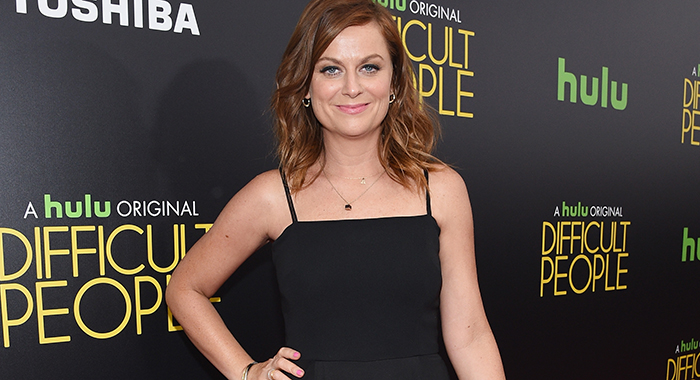 In the winter of 2012, Klausner, 37, began writing the Difficult People pilot. She sat down and asked herself what would be the show that she would want to do more than anything. She came up with a female Curb Your Enthusiasm-style story where everyone is a fictionalized version of their real-life counterparts and based the plot on her own life. Once she finished the first draft, she sent the script to Poehler for some input. Klausner had met the Saturday Night Live alum while enrolled at the Upright Citizens Brigade Theatre. “Amy really liked the script and she started talking to me about what the show could be,” said Klausner. “I then looped in Billy to be a part of the show.” The three finessed the storyline and Hulu gave the project a green light in 2014. “Amy was so helpful in shaping the show because she is really smart about TV. She knows what works and she came up with the title. She’s a genius!”

THE CHARACTERS ARE ALTERNATE-UNIVERSE VERSIONS OF THEMSELVES 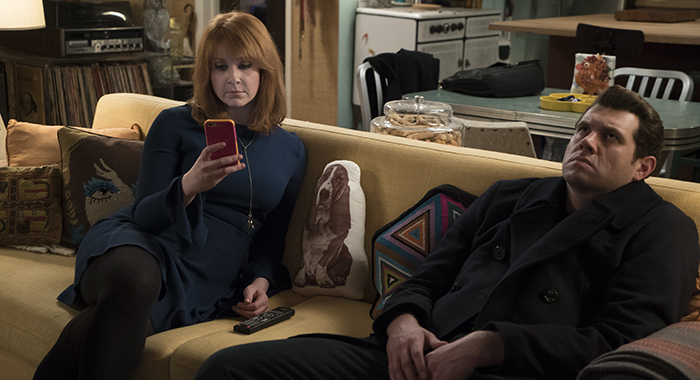 Not only is Klausner the creator and star of the show, but she also wrote every episode. “The series is autobiographical and the great thing doing something personal is that there’s always a lot to draw from,” said Klausner. “Real life never stops happening. So, a lot of the stories in the show come from real-life situations and we exaggerate it.” For instances, in the pilot, Klausner’s character (named Julie Kessler) makes a terrible joke on Twitter about how Beyoncé’s three-year-old daughter is now old enough to date singer R Kelly. Readers start to criticize her and she deletes the joke after realizing it’s in bad taste. “That happens with more frequency that I like to admit,” said the comedian. “I get very sensitive about it.”

Difficult People marks Eichner’s first leading role in a scripted series. Best known for his popular man-on-the-street game show Billy on the Street, the New York native, 36, has no problem that his character is loosely inspired by his real-life persona. “I’m playing this alternate universe version of myself and certain things are taken from my real life and some things are completely made up and because of that, it makes the show even more special and exciting,” said Eichner. “If people watch the full season, there are elements to this version of Billy that are not present in the other shows that I have done. He deals with family, friendships, dating, and career issues, so if people watch, they will get a broader sense of who I really am through my character.”

KLAUSNER AND EICHNER ARE ALSO FRIENDS IN REAL LIFE 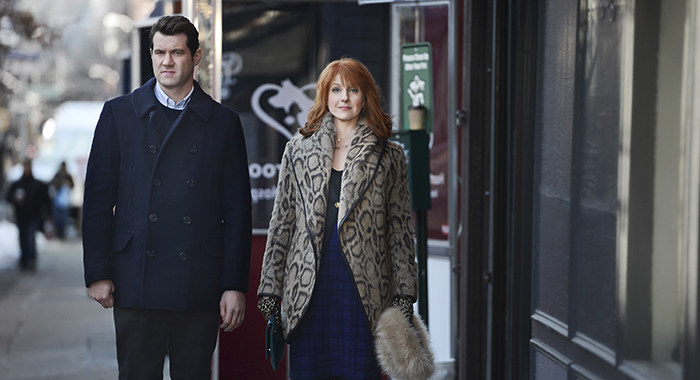 “No one makes me laugh more than Julie Klausner on a daily basIs,” gushed Eichner, who discovered her by reading her blog and also her book I Don’t Care About Your Band. He later hired her to be a writer and producer on Billy on the Street. “We really got to know each other while working on my show and we quickly realized how much in sync we were about pop culture, life, and the things that make us laugh. She really is the best.” For Klausner, she loves Eichner’s company and appreciates his smart sense of humor. “It’s nice to have somebody who has a brain. Billy has references I sometimes don’t know,” she said. “He’s so quick and knows everything about pop culture.”

BEING MEAN IS THE BEST PART OF THE JOB 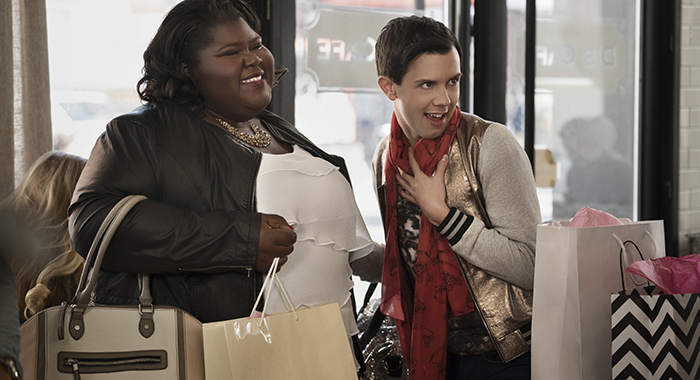 Fresh off her role as Terrance Howard’s assistant in the hit Fox series Empire, Sidibe plays Denise, an unfriendly owner of the restaurant where Billy works as a waiter. The Oscar-nominated actress, 32, is having a blast pretending to be mean to Eichner and constantly insulting him with zingers. “I said horrible things to him and had to throw keys at him all day yesterday, and I felt bad because I kept hitting him with real keys. I asked him, ‘Am I throwing it too hard?’ And he’s said, ‘No, throw it as hard as you want.’ We know we are making believe here, so being nasty to each other has been really fun. I come to work and just let my anger out. It’s therapeutic.”

Eichner finds it quite enjoyable portraying someone who is caustic and has no filter. “I’m used to being blunt and I’m known for being blunt on Billy on the Street and even on Twitter. So I tend to be pretty opinionated when I talk matters of pop culture,” he said. “The bluntness is something that Julie and I share as people. I don’t think it is as extreme in real life as it is in the show, but I do appreciate honesty and authenticity and saying things people might be scared to say. So it’s no challenge. It’s fun.” 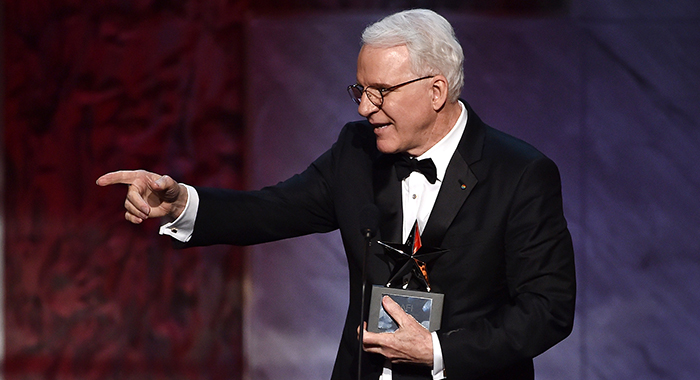 As Eichner’s career breaks outs with Difficult People, he hopes to follow in the footsteps of his comic heroes. “I have always loved Steve Martin, Martin Short, and David Letterman,” he said. “I especially love Steve Martin’s standup. I grew up watching his movies in the 80s and there’s an absurdity to it and a larger-than-life quality, but at the same time he was very smart and cerebral, even at the silliest moments. His performances are also very theatrical. What I like to do is bridge the gap between comedy and theater like he does.”

BE ON THE LOOKOUT FOR CELEBRITY CAMEOS 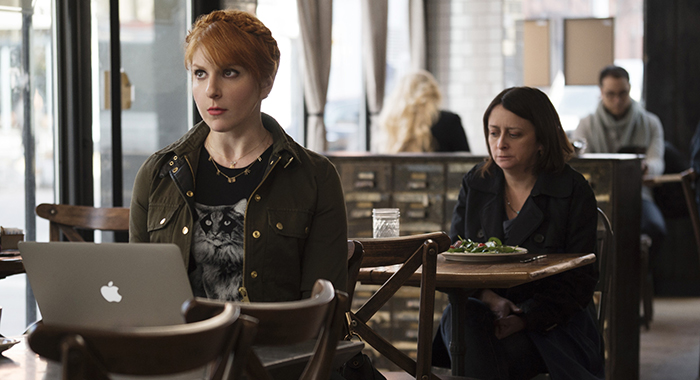 Plenty of famous faces pop up throughout the series playing fictional version of themselves or supporting characters stirring up drama. Expect to see Seth Meyers (playing a gay prostitute), Martin Short, Saturday Night Live’s Kate McKinnon, Andy Cohen, Fred Armisen (as Eichner’s brother), Debbie Harry, Amy Sedaris, and Today anchor Kathie Lee Gifford make guest appearances. For Eichner, having the opportunity to work with Gifford was a dream come true. “I was responsible for getting Kathie Lee on the show,” he said proudly. “Going back to my childhood, I loved Regis and Kathie lee. I loved watching them banter even when I was a kid, so I’ve always had a love for her. I first met her on the Today show while promoting Billy on the Street and I private-messaged her on Twitter, asking if she could do a cameo on Difficult People. We were so thrilled that she did it. She’s genuinely terrific. She plays a behind-the-scenes version of herself and it’s really great.”

DO NOT TOUCH THE CAST OR SAY ANYTHING NEGATIVE ABOUT TV 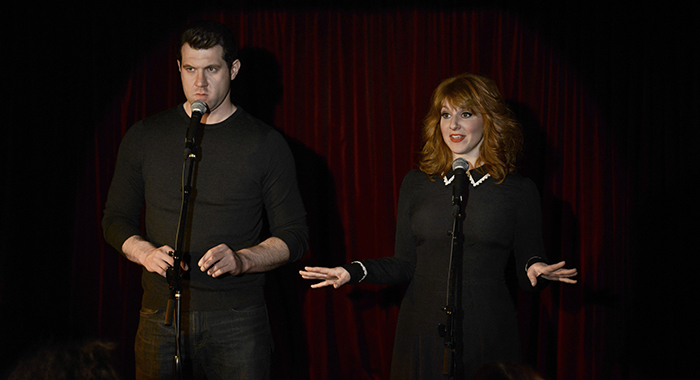 Although many viewers will find their characters’ behavior difficult (such as the two using foul language in front of kids during a Broadway matinee of Annie after finding out an understudy is playing the lead), the cast revealed their pet peeves that other people do. “A big one for me is when people expect you to be impressed with them when they say they don’t own a TV,” said Klausner. “Or they say, ‘I don’t have time to watch TV’ and then give some stupid reason by saying, ‘We work all the time.’ My work is TV and I love TV on top of being in TV. It’s like, okay, well, congratulations. It’s like they want to be rewarded for that. That drives me crazy.”

Sidibe admits she gets irritated when people invade her personal space. “I hate it when strangers touch me in the wrong place,” she said. “Touching my arm is less weird, but stroking my back or touching me near my neck is gross. People touch me on a constant basis and I sort of have to go dead inside about it.”

Eichner is bothered by ambiguity. He explained that he doesn’t like people who lead others on and don’t automatically say how they feel in order to be nice. “That to me is a huge pet peeve because you just end up wasting everyone’s time,” he said. “It’s better in the long run if you are honest with someone even if it offends them. Honesty is always the answer. That should be the lesson take from our show. From our very mean show!”