6 Things About Mr. Robot We Learned From Rami Malek and Christian Slater

USA Network has postponed the Mr. Robot finale and released this statement: “The previously filmed season finale of Mr. Robot contains a graphic scene similar in nature to today’s tragic events in Virginia. Out of respect to the victims, their families and colleagues, and our viewers, we are postponing tonight’s episode. Our thoughts go out to all those affected during this difficult time.”

It’s been one of the best shows of the summer, and now Mr. Robot, USA’s surprise hit starring Rami Malek as a troubled computer hacker and Christian Slater as the titular Mr. Robot, concludes its first season tonight.

Twistier than the Coney Island Cyclone,  Mr. Robot has consistently been the fodder of weekly discussions from fans and critics alike about what the heck is going on. The stars promise that tonight’s finale will provide you with the answers you’ve been looking for — but don’t be surprised if it also raises more questions.

Here’s what Malek and Slater had to say to Rotten Tomatoes at the Television Critics Association press tour earlier this month about season one’s wild ride. [Warning: Contains season one spoilers]

ON REALIZING THEY HAD A HIT ON THEIR HANDS 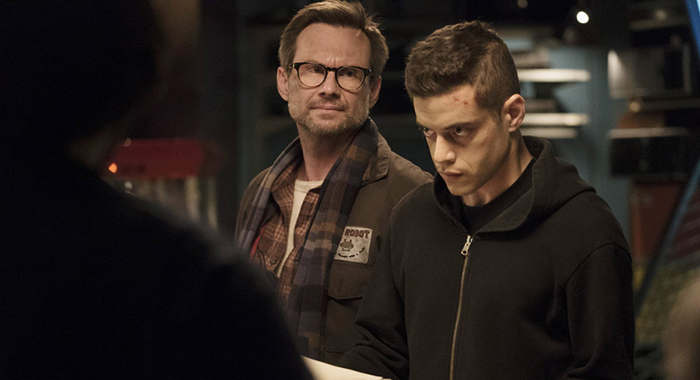 Mr. Robot, which is the top cable drama of the summer, earned critical buzz, two million online viewers, and a season-two renewal before it even premiered its first episode on USA in June. For Malek, the notion that this was not the typical reception of a new series was confirmed by Slater, who has been on enough TV shows to know they had something special.

Malek remembered the moment Slater shared with him the New York Times story about Mr. Robot on the cover of the arts section. “He just kind of let it flop open and he showed it to me and goes, ‘This does not happen.'”

Concerned that the dark aspects of the show might not be palatable to viewers, Malek was reassured by both the critical response to early episodes, and also Slater’s reaction to the positive reception. “I could see Christian light up  in a way that he was proud of it,” Malek said. “He also acknowledged to me that we’re in a really great position with this show. It’s something to be appreciative about.”

ON FILMING IN THE MEAN STREETS OF NEW YORK CITY 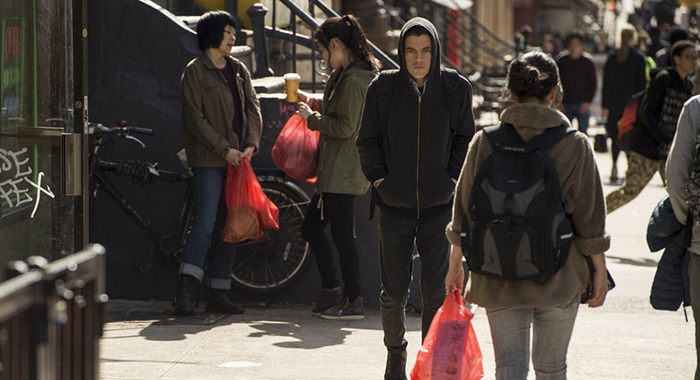 This is not Sex and the City‘s New York, where a newspaper columnist can afford a brownstone apartment in the Upper West Side (we don’t care how rent-controlled it is). Elliot’s terrain, from the claustrophobia of Times Square to the eerily abandoned Ferris wheel in deep Brooklyn to the tenement in which he lives — the one his friend Angela (Portia Doubleday) points out in the first episode is in a “bad neighborhood” — maps a much grittier version of the Big Apple than we’re used to seeing on television.

“We want people to see New York in a way that it hasn’t been portrayed recently. Kind of a throwback to the days when there was the grittier, grimier side of New York City,” Malek explained.

He and Slater mused about filming the series among real New Yorkers, including many who had little patience for hosting a TV production in their ‘hoods. The areas where the show shoots are marked with disclaimers, and most of the “extras” you see on the streets are non-actors going about their day.

“You get a lot of people who are fed up with people shooting in their neighborhoods who will just walk into a shot,” Malek said, smiling. “They have no regard for the filming, which is all right; they’re just over it. They don’t want to wait to hear ‘Cut!” so they can go to their apartments. I understand it.” 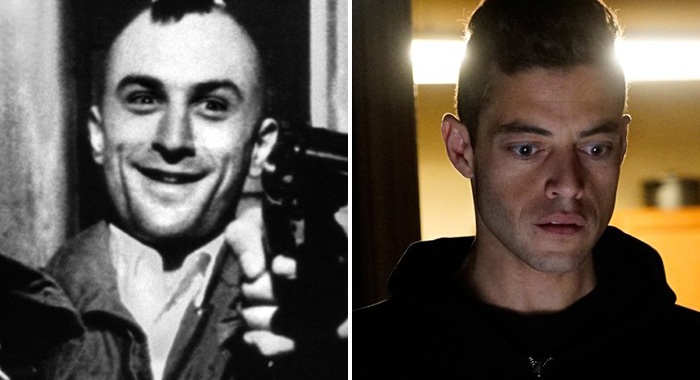 Speaking of those mean streets, who hasn’t watched Mr. Robot and been reminded at least once of Martin Scorsese‘s New York? Factor in that our hero is a bit off, and you’re right to see a little bit of Travis Bickle in Elliot.

“I think I watched Taxi Driver more than any film I did in preparation for Mr. Robot,” Malek revealed. “I was enthralled by [Travis Bickle] and it’s such an iconic movie. De Niro did something so revolutionary with that character. He embraces a guy who was on the fringes of society and made him relatable — humanized him. That’s something we’ve aspired to do with a lot of the characters on this show and something I really work hard at doing with Elliot.” 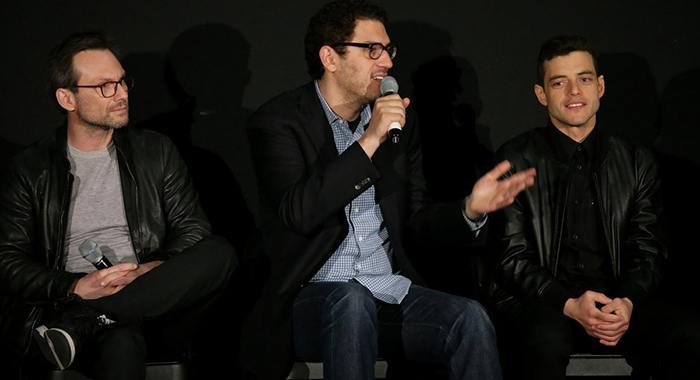 Perhaps one of the more mind-boggling things about Mr. Robot is that its creator and showrunner, Sam Esmail, has never made a TV show before. A showbiz unknown, Esmail originally set out to write a movie, but said that the narrative had become too unwieldy — and thus the idea became a spec script which became a TV pilot which became (for now) two seasons of a hit series — which will (hopefully) become five seasons.

“This is a guy who’s not writing things off the cuff at the eleventh hour. He has a blueprint for this entire show,” Malek explained. “There have been moments when he’s asked me, ‘What do you want to know? Are you the type of actor who wants your throughline for everything? Or do you want to take things and be surprised as things come?… He could have sat there and described [the entire series] to me. I even almost glanced at what he had written for all of that. He has a great outline for it. I realized what was more beneficial was to take things as they come and hit me the way they do Elliot.”

Malek and Slater also detailed how Esmail takes suggestions from them about their characters with an open mind. “If you come at him with an argument as to why you think differently than he does, he’s open to your interpretation — but it has to be backed up,” Malek said.

Slater added, “If I come to him with a question about my character, thinking, ‘Some of the things I do… how do I come back from doing that?’ He has a real answer and it makes me feel great that he’s actually thought it through.”

ON THAT CRAZY BODY-IN-THE-TRUNK SCENE 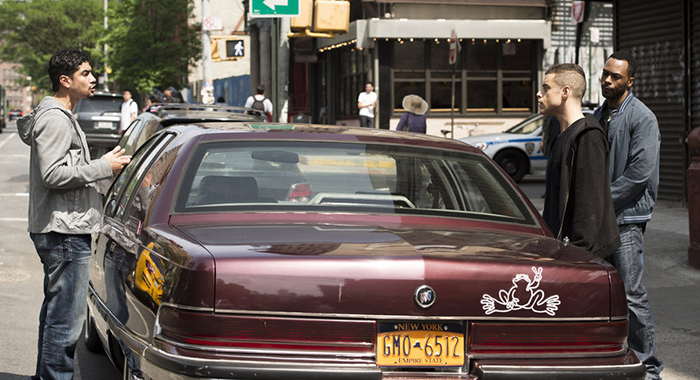 In episode six, ”eps1.5_br4ve-trave1er.asf,” Elliot — along with the audience — confronts the horrific revelation that Shayla is dead. Though the writing provides a huge twist ending, many critics cite Malek’s performance in those final moments as the reason the discovery is so impactful.

“I thought about the way I wanted to play it,” Malek recalled. “I really wanted to keep it very stoic and internal. Sam wanted it in one long take, so I just thought about how it would hit me eventually. It’s a relationship that’s been very dear to me. So to see her in that trunk and know that I was the cause of that hit me viscerally, emotionally; it hit me in my head. It had a wide array of impact on me on the day. I just let it change how it would affect me over and over in different ways. I remember we did it a bunch of times — we were also running out of time that evening. It’s difficult. In those long shots you’re only going to use one of them, so you start to question what you really want to reveal. It’s good in that respect because it limits your choices.”

ON WHAT TO EXPECT FROM THE FINALE 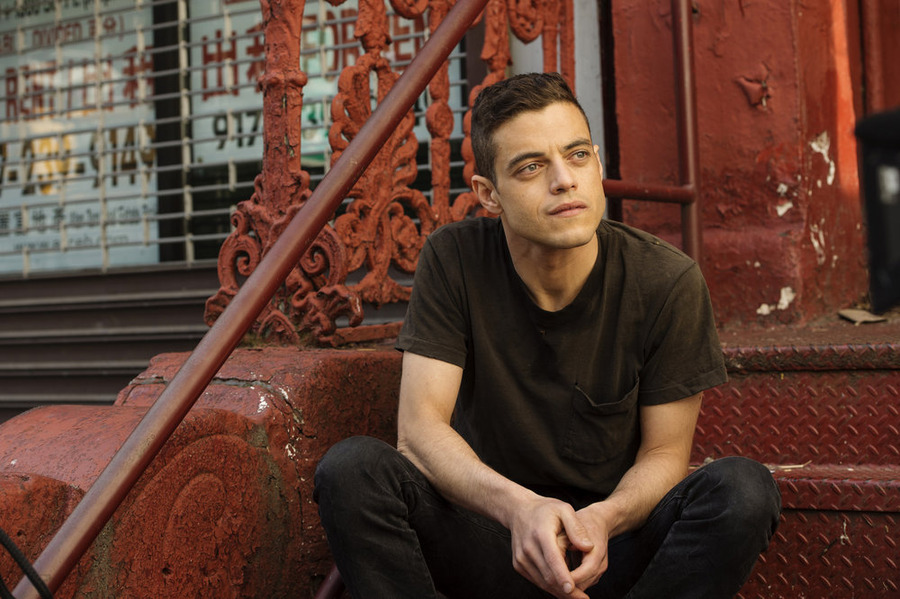 So, what can we expect in tonight’s finale episode?

“I got so excited and so happy,” Slater said about reading the end of season one. “It’s so rare when that happens — when a writer really does make you go, ‘Oh my God, wow. I really didn’t know that was going to happen… That’s the thing that is frustrating about [the show] because you want to talk about it. I know we were both very excited about where it goes and who these guys are — what the journey is. Sam has done a great job of wrapping up this first season and answering a lot of questions, but — at the same time — creating more questions and leaving some unanswered ones.”

“I would say,” Malek added, “that with episode 10, if you wanted to pick an episode that really summarizes our season, it would be this finale.”

Mr. Robot season one is Certified Fresh at 97 percent.  The season finale airs on September 2 on USA at 10 p.m. 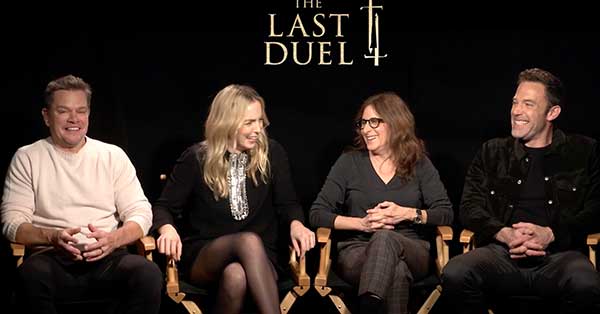 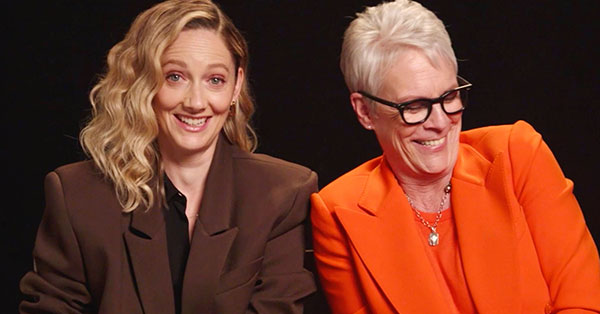 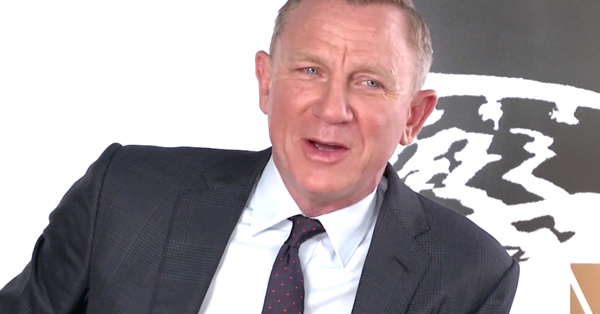